Bush officials said they only tortured terrorists after they wouldn't talk. New evidence shows they planned torture soon after 9/11 -- and used it to find links between al-Qaida and Saddam. 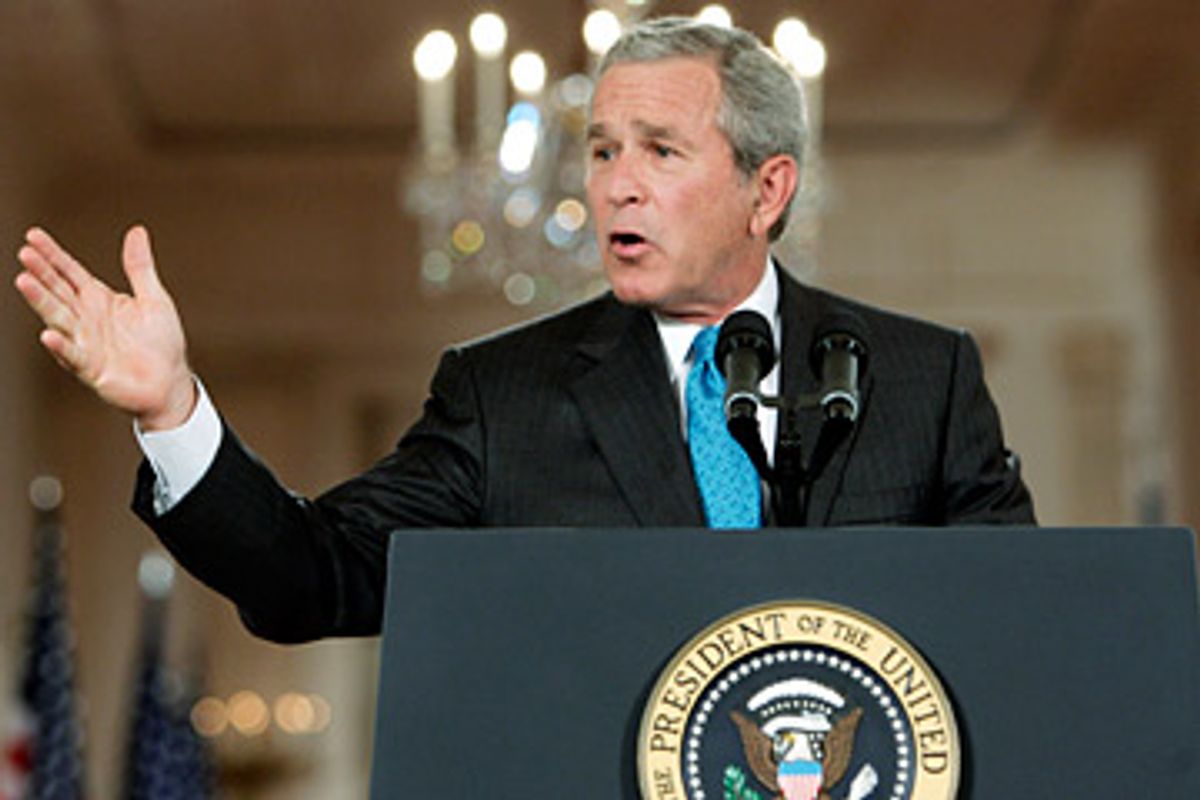 The Senate Armed Services Committee has just released an exhaustive review of torture under the Bush administration that, among other revelations, torpedoes the notion that the administration only chose torture as a last resort. Bush officials have long argued that they turned to coercive interrogations in 2002 only after captured al-Qaida suspects wouldn't talk, but the report shows the administration set the wheels in motion soon after 9/11. The Bush White House began planning for torture in December 2001, set up a program to develop the interrogation techniques by the next month, and the military and the CIA began training interrogators in coercive practices in early 2002, before they had any high-value al-Qaida suspects or any trouble eliciting information from detainees.

As the report puts it, "The fact is that senior officials in the United States government solicited information on how to use aggressive techniques, redefined the law to create the appearance of their legality, and authorized their use against detainees." The report undercuts the Obama administration's case for leniency against the CIA, since the agency was pursuing abusive techniques even before Department of Justice lawyers had issued their supposed legal justification for the techniques in August 2002. The report also shows that the administration appears to have attempted to use the abusive techniques to shore up its case for war in Iraq. Interrogators employed the techniques, which are notorious for producing bad intelligence, to get detainees to make statements linking Iraq and al-Qaida.

To hear former President Bush tell it, you would think the United States only turned to the techniques in desperation. When Bush announced the existence of the CIA's interrogation program in September 2006, for example, he argued that suspected al-Qaida operative Abu Zubaydah stopped cooperating with interrogators after his capture on March 28, 2002, forcing the agency to get rough. "We knew that Zubaydah had more information that could save innocent lives," Bush said. "But he stopped talking. As his questioning proceeded, it became clear that he had received training on how to resist interrogation," the president said. "And so, the CIA used an alternative set of procedures."

Not to worry, the president explained. "The Department of Justice reviewed the authorized methods extensively, and determined them to be lawful."

But that's not how it happened. Staff reporting to Chairman Sen. Carl Levin, D-Mich., pored over 200,000 pages of documents and interviewed more than 70 people. After months going through the declassification process, their report is a stunningly frank tick-tock of the development of torture policy under the Bush administration. The sequence of events shows the early genesis of torture and also exposes repeated, vivid warnings -- falling on deaf ears -- that torture is a clumsy, wrongheaded and ineffective way to gather intelligence.

To set up the torture program, the Department of Defense and the CIA reverse engineered something called SERE training, which was conducted by the JPRA. Based on Cold War communist techniques used to force false confessions, in SERE school elite U.S. troops undergo stress positions, isolation, hooding, slapping, sleep deprivation and, until recently, waterboarding to simulate illegal tactics they might face if captured by an enemy who violated the Geneva Conventions.

In either December 2001 or January 2002, two psychologists affiliated with the SERE program, James Mitchell and Bruce Jessen, developed the first written proposal for reverse engineering the training for use on al-Qaida suspects. Their paper made its way to the Joint Staff. (Salon first zeroed in on the pair in a June 2007 article.) The military also then began discussions at that time about using the ideas at Guantánamo.

In early March 2002, Jessen began two-week, "ad-hoc 'crash'" courses for training  government interrogators slated for Guantánamo. The courses therefore began before the allegedly uncooperative Zubaydah was ever captured, and Zubaydah was the first allegedly high-level al-Qaida operative in U.S. custody after 9/11.

Zubaydah was picked up on March 28, 2002, and hospitalized for wounds suffered during his capture. The FBI interviewed Zubaydah first, with some reported success. Zubaydah disclosed to the FBI that Khalid Sheikh Mohammed, or KSM, was the mastermind behind the 9/11 attacks and used the alias Mukhtar.

Then the CIA got involved. As the report details, the FBI objected to the CIA's treatment of Zubaydah, calling it "borderline torture," and pulled out, leaving the CIA to do as it pleased. The exact date of handoff from FBI to CIA is unclear.

In April 2002, the Senate report shows, Jessen drafted another paper, an "exploitation plan," suggesting the establishment of a secret prison away from the prying eyes of the International Committee of the Red Cross. Soon, Zubaydah was whisked off to a secret CIA black site prison. Mitchell participated in his interrogation.

By July, government interrogation training (at a location blacked out in the Senate report) included role playing, with one person acting as the "beater" and another as the "beatee." (That same month, Jessen was detailed to the CIA. He then retired from the military and he and Mitchell began working for the CIA as contractors.)

The Justice Department opinion condoning abusive interrogations did not come out until August, eight months after the Bush administration started putting the program together and presumably well after Zubaydah's torture had begun.

News reports have already shown that as the Bush administration considered abusive techniques, military attorneys warned they might be illegal. The Senate report also brims with early warnings from various quarters that torture is a relatively ineffective intelligence-gathering tool.

When the Pentagon first asked JPRA for help setting up an interrogation program in December 2001, the agency agreed. But even that offer from JPRA Chief of Staff Lt. Col. Daniel Baumgartner warned that physically abusive techniques were believed to produce information that was "less reliable" than other techniques.

In July 2002, a JPRA memo to the Pentagon included the warning that "the reliability and accuracy of this information is in doubt" if garnered from physical or psychological duress. "In other words," the agency warned, "a subject in extreme pain may provide an answer, any answer, or many answers in order to get the pain to stop."

After training interrogators on the use of SERE techniques in August 2002, one trainer worried in his after-action report that, "We have no actual experience in real world prisoner handling. The concepts we are most familiar with relate to our past enemies."

An Oct. 2, 2002, Army memo for the general in charge of Guantánamo at the time discussed the use of SERE techniques at GTMO. It included the warning, "Experts in the field of interrogation indicate the most effective interrogation strategy is a rapport-building approach." A lieutenant colonel who had helped organize SERE training for interrogators also sent a warning attached to that memo that, "If individuals are put under enough discomfort, i.e. pain, they will eventually do whatever it takes to stop the pain. This will increase the amount of information they will tell the interrogator, but it does not mean the information is accurate," he wrote. "In fact, it usually decreases the reliability of the information because the person will say whatever he believes will stop the pain." Of course, by then the administration had already made up its mind.

The Bush administration's motives for employing the harsh techniques are also called into question by the report. The Bush administration has argued publicly that it got tough on detainees to prevent another al-Qaida attack. The Senate report describes another possible motive, and a sobering example of how torture can produce bad intelligence.

"While we were there a large part of the time we were focused on trying to establish a link between al Qaida and Iraq and we were not being successful in establishing a link between al Qaida and Iraq," Army psychiatrist Maj. Paul Burney is quoted in the Senate report as saying about Guantánamo. "The more frustrated people got in not being able to establish this link ... there was more and more pressure to resort to measures that might produce more immediate results."

Apparently, one of the individuals applying pressure for results was then-Deputy Secretary of Defense Paul Wolfowitz, a major advocate of the Iraq invasion. Wolfowitz called the man in charge of Guantánamo at the time, Maj. Gen. Michael Dunlavey. Wolfowitz called "to express concerns about the insufficient intelligence production" at Guantánamo, the report says. Wolfowitz suggested the use of more aggressive interrogation techniques. The report cites the Guantánamo interrogation chief at that time, David Becker, as the source of this information about Wolfowitz. Dunlavey, however, told the Senate investigators he could not recall the Wolfowitz call.

The Bush DOJ did ultimately produce a formal stamp of approval for the techniques. An August 2002 memo released by the Obama White House last week shows Assistant Attorney General Jay Bybee of the Office of Legal Counsel providing a legal rationale for waterboarding. That memo and several others were meant to act as a "golden shield," protecting interrogators. And President Obama has said that the DOJ's legal sanction for abusive interrogations should provide some cover from prosecution. "It is our intention," he said last week, "to assure those who carried out their duties relying in good faith upon legal advice from the Department of Justice that they will not be subject to prosecution." Attorney General Eric Holder said, "It would be unfair to prosecute dedicated men and women working to protect America for conduct that was sanctioned in advance by the Justice Department." Chief of Staff Rahm Emanuel added over the weekend, on ABC's "This Week," that the indemnity extends to high-level Bush administration officials who orchestrated the abuse.

But in comments to reporters today, Obama seemed to leave open the possibility that Bush administration attorneys weren't necessarily off the hook yet. He also signaled some willingness to allow the creation of a nonpartisan commission to study torture under the Bush administration.