The world is a beautiful place -- so stop screwing it up! Disney's lush nature documentary follows three animal families struggling to survive on a planet changing all too rapidly. 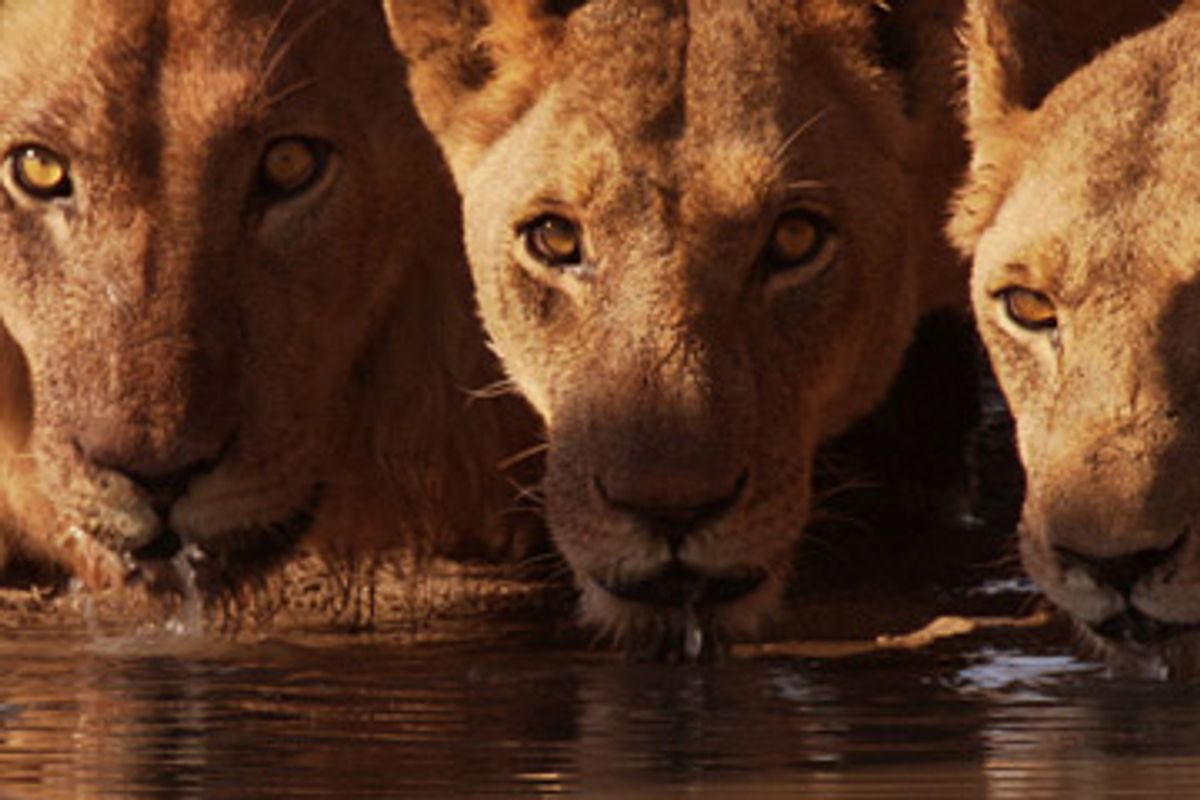 There's no question that Disney's nature film "Earth" is beautiful to look at: A coffee-table book in documentary form, it charts the movements of three animal families -- a set of polar-bear parents and their two cubs; a mother elephant and her baby; and a humpback whale and her calf -- as they struggle to survive in a world that's changing all too rapidly, thanks to mankind. The directors, Alastair Fothergill and Mark Linfield, the filmmakers behind the BBC television series "Planet Earth," know exactly what to put in and what to leave out in terms of visuals. Helicopter shots capture glorious arctic and desert textures, with all their modern-art cracks and fissures; the silly mating dance of a bird of paradise strikes a whimsical note; and, in one particularly arresting and amusing shot, a trio of lionesses look up momentarily from their drinking hole, all three turning their heads simultaneously, like choreographed showgirls. The movie's images sometimes make us reconsider our own visual confidence: Although we think of polar bears' coats as white, against the whiteness of Arctic snow, they're actually a lush golden yellow.

The message that comes through in these images, helped along by James Earl Jones' narration, is gentle but stern: Our planet is a wonderful place filled with beauty, and for our fellow creatures' sake as well as our own, we'd better stop fucking it up -- although Jones doesn't use those exact words. "Earth" -- the initial release from a new Disney division called, simply enough, Disneynature -- is a regal-looking picture, to the point of being a little sterile. You may find yourself saying "Wow!" plenty of times, without ever being particularly moved, despite the fact that the filmmakers address, if only glancingly, the harsh reality that in nature, animals don't often live a long and happy life. Fothergill and Linfield are extremely discreet about animal death: For example, a white wolf chases down a young caribou, and although the movie treats the predator's pursuit like a car-chase scene in an action movie, the caribou loses -- the filmmakers cut the scene just at the point where the wolf moves in for the kill, so we're spared the sight of the young animal's suffering (and the wolf's bloody feast). Elsewhere, a pride of lions tackles a full-grown elephant under cover of darkness -- we see them clamber over him, almost playfully, but we don't see what inevitably happens next.

I have mixed feelings about that ultra-judicious approach: On the one hand, I don't particularly need or want to see a wolf tearing into a caribou carcass, and I wouldn't want to see Disney inflict that on little kids, either. (The picture is rated G.) On the other hand, there's something a little coy about the way the camera turns away at just the right moment, as Jones' narration does a swift about-turn toward cheerier subjects. I'm not sure what the solution is; it's possible that "Earth" tries to cover too much information in too little time, and the picture's tone might be smoother if Fothergill and Linfield didn't have to navigate so many abrupt shifts between nature's inherent cruelty and its equally vital beauty.

So if you're bringing little kids to see "Earth," brace yourself for the inevitable question of what happens to the young elephant who becomes separated from his herd and tries to follow -- by heading off in the wrong direction. (The movie doesn't come right out and tell us, but as we see the little guy in long shot, ambling through a parched, lonely stretch of the Kalahari Desert, we all know the answer.) The emotional dryness of "Earth" is perhaps more a liability than a strength: If we're supposed to feel some kinship with our fellow creatures, we're naturally going to feel some sadness when a young animal's life is cut short -- and feeling that little bit of sadness is a measure of how, as human beings, our minds and hearts work, not a denial of how nature works. (Animals eat other animals, and there's nothing PETA, or any of us, can do to stop it.)

But there's nothing in "Earth" that's as moving as the sight of the mother penguin "grieving" for her chick in "March of the Penguins." You can applaud "Earth" for not jerking tears. On the other hand, an occasional tear isn't such a bad thing. "Earth" almost got one out of me when the father polar bear, weakened from going too long without food, realizes he's not going to catch the walrus he's been eyeing. He lies down, exhausted, on the ice and -- well, it looks as if he's going to sleep, but it's clear he's headed for the big sleep. He wouldn't be in this predicament if global warming hadn't so drastically changed his habitat, as the movie makes clear. You may not cry for the polar bear. But "Earth" at least suggests that we share responsibility for his plight.