I can't believe it's not torture, redux!

When will media elites stop acting like there's confusion about whether waterboarding is torture, and whether torture is against the law? 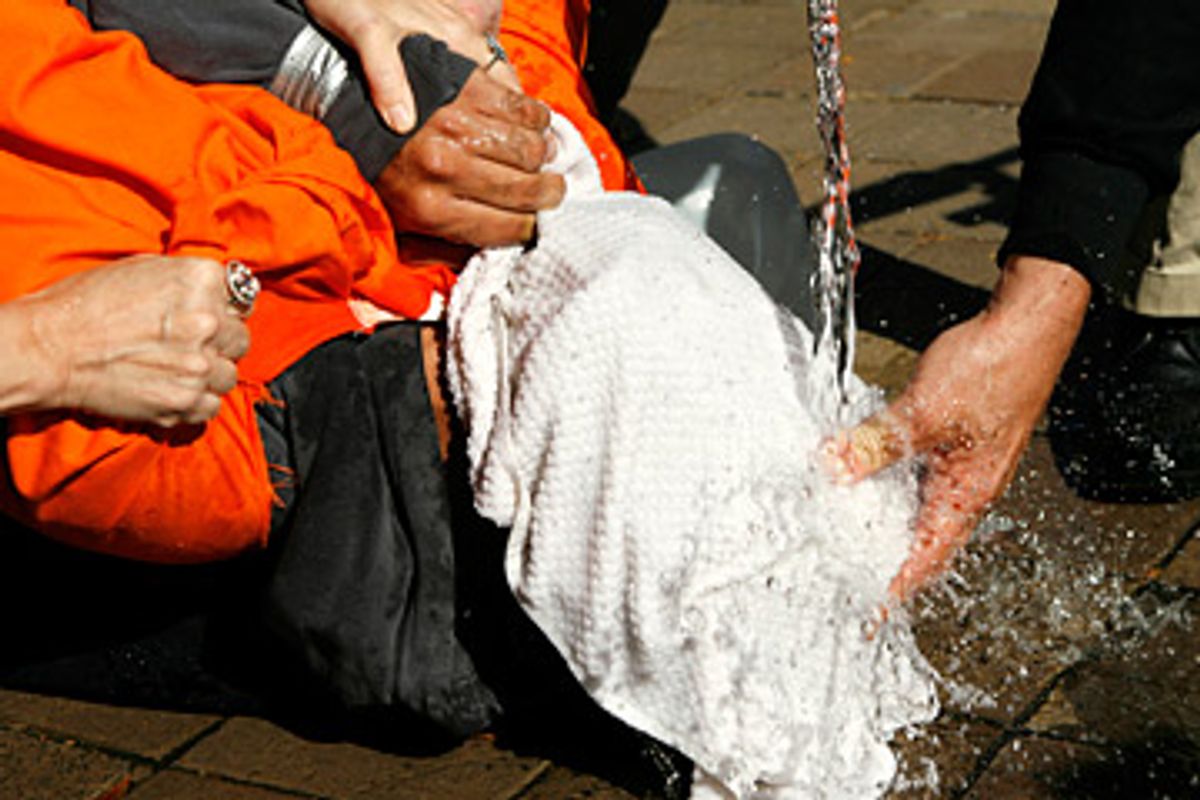 I was tempted to write to Clark Hoyt, the admired public editor for the New York Times, after reading Friday morning's convoluted piece, "Obama Resisting Push for Interrogation Panel." It contains this remarkable weasel-wording:

"Although a full-scale independent inquiry now appears unlikely anytime soon, the Bush administration’s use of waterboarding and other techniques that critics say crossed the line into torture could still be examined by a variety of Congressional panels in addition to the Senate Intelligence Committee."

Why was the issue framed that way, as though the question of whether waterboarding is torture, and torture is illegal, is still a matter of debate? And will it ever be New York Times style to flat-out say that?

But the New York Times is the least of our worries when it comes to mainstream media coverage of the torture issue. Glenn Greenwald captures the remarkable cluelessness of the media elite and many Democrats on the issue of whether Attorney General Eric Holder can, should or must act independently from President Obama in determining who in the Bush administration authorized illegal torture, and how to hold them accountable. The fact that some Democrats may have known something about the illegal interrogation tactics doesn't matter at all. As Glenn points out, it only makes the need for transparency and accountability that much more dramatic.

I'm disappointed in Obama, though I still don't believe that his opposition to a congressional commission to investigate torture, as reported by the Times, can be categorically read as opposing any further inquiry. I'm not surprised by the remarkable flip-flopping on a torture investigation carried out by Senate Majority Leader Harry Reid; he had his spine surgically removed a few years back and replaced by a Slinky. Reid has now also expressed support for Judge Jay Bybee, who the Times and others believe should be impeached for his role falsifying a legal foundation for torture. We shouldn't be surprised: Leading Democrats have almost always found a way to do the wrong thing when cowed by the Bush torture regime.

It deserves to be said whenever this issue is discussed: Ronald Reagan signed the U.N. Convention against Torture. Here's what he said in his signing statement: "The core provisions of the Convention establish a regime for international cooperation in the criminal prosecution of torturers relying on so-called 'universal jurisdiction.' Each State Party is required either to prosecute torturers who are found in its territory or to extradite them to other countries for prosecution." (Read the whole thing here.)

Will Obama turn out to be the Democrat who says he can't live up to an international agreement signed by Ronald Reagan, because it might get in the way of his political agenda? I sure hope not. Taylor Marsh sees some reason to believe the administration will handle this correctly -- most notably, the fact that more shocking torture revelations are headed our way, which will almost certainly increase the pressure on Democrats and the Obama admnistration to act.

But with media elites treating the dispute over prosecuting torture like a fun political food fight, Obama can probably get away with doing whatever he wants. Let's hope he wants to do the right thing -- or, at the very least, that Eric Holder knows what the right thing is, and does it.