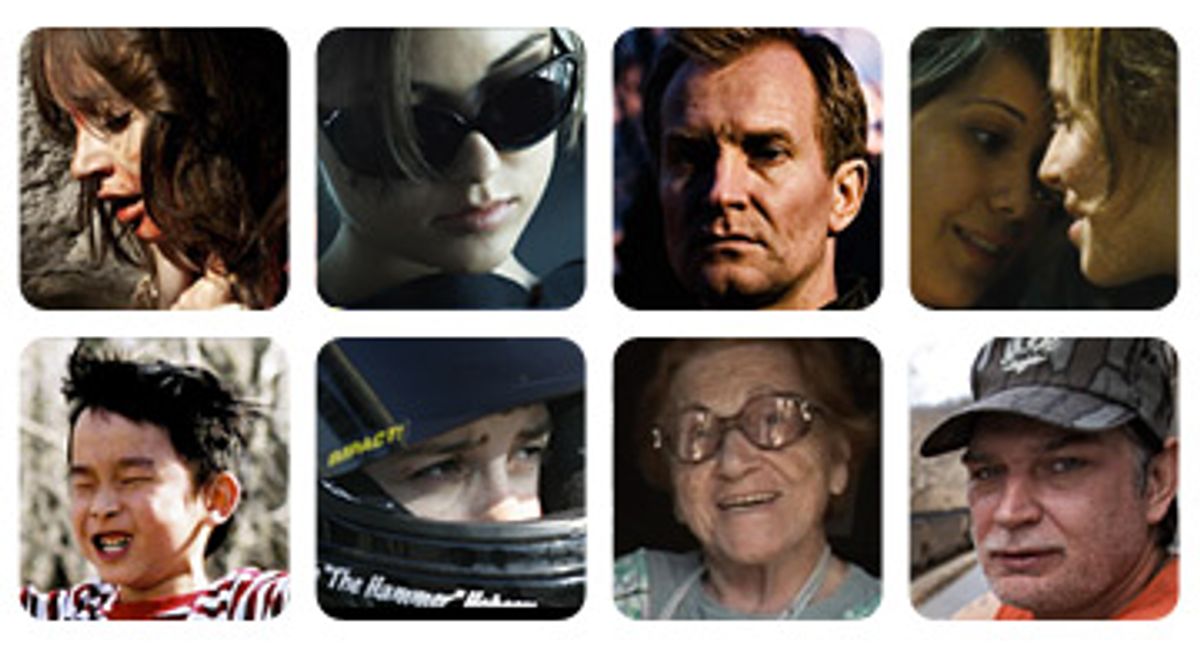 Like most other things in the universe of late, the Tribeca Film Festival has gone through a major institutional shakeup and gotten a lot smaller. (I wrote about all this in some detail on Thursday.) Three years ago, New York's brash and ambitious spring festival featured a supermarket-scale profusion of cinematic products, with a reported 174 feature films. (I certainly didn't try to count them myself, let alone see them.)

This year, the festival co-founded in the wake of 9/11 by Robert De Niro, producer Jane Rosenthal and investor Craig Hatkoff is down to a more manageable 85 features, and has even returned fairly close to its one-time neighborhood roots, with most screenings in lower Manhattan and a few actually in Tribeca, the restaurant-and-boutique-cluttered pizza slice of geography below Canal Street. All this can only be a good thing, given the miscellaneous programming history and overweening ambition that have often made it seem as if bigness was this festival's only real raison d'être.

With the recent departure of artistic director Peter Scarlet, and the arrival of Geoffrey Gilmore, longtime head of the Sundance Film Festival, in a newly minted executive position, the future of Tribeca is very much up in the air. But this year's leaner, meaner lineup may be the strongest in the festival's eight-year history, with hardly any Hollywood pandering and a minimal number of the mediocre indie premieres Tribeca has so often packaged as big events.

Here's my user's guide to Tribeca, with 10 narrative features and 10 documentaries that look most promising (listed alphabetically, and not otherwise ranked). Let's call it the beta version, since -- as is customary with such things -- it's driven at least as much by guesswork and publicist-hype as by knowledge or wisdom. I've seen some of these and sampled others, but by no means all. I'll check back at festival's end with some highlights, discoveries and a bit more reality-based commentary.

"About Elly" Iranian filmmaker Asghar Farhadi copped the directing prize in Berlin for this ensemble drama about a group of friends on a seaside vacation that's supposed to lead to romance but instead moves into mystery and tragedy. The resemblance to Antonioni's "L'Avventura" is not accidental, but Farhadi is also building a complex portrait of the contradictory lives young Iranians must lead in a quasi-theocratic society.

"The Eclipse" This intriguing supernatural romance from Irish playwright-turned-director Conor McPherson features a great star turn from the underappreciated Ciarán Hinds, playing a widower with two kids who becomes haunted by an angry ghost and caught in a love triangle between two visiting novelists, a wounded Scandinavian blonde (Iben Hjejle of "High Fidelity") and an arrogant Irish-American bullshitter (Aidan Quinn, in an entertainingly loathsome role).

"Fear Me Not" Another intense thriller from the suddenly hyperactive Danish genre-film industry (and one-time Dogme 95 director Kristian Levring) stars Ulrich Thomsen as a successful family man who signs up for an experimental trial of a new antidepressant. Problem is, he likes it so much he refuses to quit when the trial is called off, due to some especially alarming side effects.

"The Fish Child" Young Argentine director Lucía Puenzo, whose last film was the intersexual-teen drama "XXY" -- an international film-fest fave -- returns with a dazzling thriller-romance built around a lesbian affair between an upper-crust woman and her family's Paraguayan maid. Puenzo's work alienates some viewers and delights others; I'm a big fan.

"Fish Eyes" I haven't seen 30-year-old Chinese director Wei Zheng's debut feature, described as an enigmatic mood piece set on the edge of Beijing during last year's Olympics that explores the relationship between a father, a son and a mysterious woman. But one friend whose opinions I generally trust says it's an absolute knockout, reminiscent of the work of Chinese art-god Jia Zhangke.

"The Girlfriend Experience" Another of Steven Soderbergh's quickly-made, low-budget experimental films, this one following an expensive Manhattan call girl (played by "adult film" star Sasha Grey) as she bounces from client to client while her relationship to her ultra-buff athletic-trainer boyfriend disintegrates. With its cut-up, quasi-Godardian narrative and Grey's affectless performance, this is more a cool and intriguing metaphor than a moving human story.

"The House of the Devil" Indie horror auteur Ti West ("Trigger Man," "The Roost") delivers a subtle, clever '80s-style flick that's closer to homage than spoof. A cute college girl (Jocelin Donahue) takes a baby-sitting gig deep in the woods, at a creaky old Victorian inhabited by Tom Noonan and Mary Woronov. But there's no baby! And it's the night of a lunar eclipse! And Mr. and Mrs. Creepy have other plans for her.

"Seven Minutes in Heaven" From the booming and artistically ambitious realm of Israeli cinema comes this quasi-experimental psychological thriller (by first-time director Omri Givon) about a young woman injured in a terrorist bombing aboard a Jerusalem bus. She can't remember the event, which left her boyfriend in an irreversible coma; but to move forward she's got to reconstruct that terrible day.

"Vegas: Based on a True Story" A leading Iranian director in the '80s, Amir Naderi has spent nearly two decades making excellent low-budget New York dramas, virtually unnoticed by the film industry or mainstream audiences. Here he turns to the depressed outskirts of Las Vegas, where a working-class couple confronts a mysterious returned Marine in a tale halfway between neorealism and metaphysical fable.

"Antoine" A moving and visually impressive doc (say those who've seen it) from director Laura Bari follows a 5-year-old, born 100 days premature and blind, who uses a mini boom mike to capture the world around him and create his own private reality.

"Blank City" There's a half-accidental minifest inside Tribeca this year, capturing the music, movies and fashion of New York in the dangerous but exciting late '70s and early '80s punk heyday. None does it better than Celine Danhier's doc about No Wave cinema, which produced big names like Jim Jarmusch and Steve Buscemi and pseudo-stars like Debbie Harry and Lydia Lunch, but also nearly forgotten avant-garde avatars like Nick Zedd, Richard Kern, Amos Poe and Bette Gordon (who actually has a new film, "Handsome Harry," in Tribeca this year).

"Defamation" One of the hot-button Tribeca titles this year, Yoav Shamir's doc tries to take an even-handed look at the explosive topic of anti-Semitism: Is it A) a resurgent threat that could lead to a new Holocaust, or B) the object of a Jewish paranoia industry? Shamir's interviews encompass Anti-Defamation League head Abe Foxman (who argues for A), scholar Norman Finkelstein (who favors B) and, believe it or not, people in between.

"Kobe Doin' Work" I don't know for sure that Spike Lee's documentary about basketball superstar Kobe Bryant was inspired by "Zidane: A 21st-Century Portrait," but the modus operandi is essentially the same. Lee's 30 cameras follow Bryant, up close and personal, all the way through a Lakers-Spurs game, whether he's on the court, on the bench, in a timeout huddle or heading to postgame interviews.

"Lost Son of Havana" Another intriguing entry in Tribeca's ESPN-sponsored sports-film fest, Jonathan Hock's documentary offers a moving and complicated portrait of former Red Sox and Yankees pitching star Luis Tiant on his return to Cuba, 46 years after he fled the island as an exile.

"Outrage" Latest exposé doc from Kirby Dick ("This Film Is Not Yet Rated") focuses on hypocritical politicians who campaign on anti-gay platforms while enjoying, let's say, a more relaxed attitude toward their own private lives. The film will have to stand on its own, since the secrets it purportedly reveals won't be kept secret for long. Based on what I've heard so far, Florida Gov. Charlie Crist won't be delighted.

"Rachel" Rachel Corrie, the young American activist killed by an Israeli bulldozer in the Gaza Strip in 2003, has been beatified as a "strong, generous and beautiful" peacemaker in some quarters and damned in others as "pro-terrorist swine." I don't know where Arab-Jewish-French director Simone Bitton's doc comes down, but based on her terrific film "Wall," about the Israeli-Palestinian border fence, she'll find unexpected depth and dimension to Corrie's story.

"Racing Dreams" Marshall Curry, Oscar-nominated for his terrific political doc "Street Fight," goes inside the world of go-kart racing, which fills a role for many NASCAR-obsessed Americans that youth soccer or Little League baseball fills in suburbia. A classic "process film" that follows three kids, and their families, on the quest for karting's national championship.

"Team Qatar" From Liz Mermin, director of the terrific and unexpected "Beauty Academy of Kabul," comes this reported stereotype-buster about the first-ever Qatari national debate team. A group of 15- to 17-year-olds, surprisingly multicultural and diverse, are coached by recent Oxford grads on the long road from Doha to London to Washington for the World Schools Debating Championship.

"The Wild and Wonderful Whites of West Virginia" Given that Johnny Knoxville of "Jackass" fame is among the exec producers, one might fear the worst from this year-in-the-life study about the tap-dancing White clan of Boone Co., W.V., known as much for their criminality and debauchery as for preserving a dying Appalachian folkway. But I hear there's more than enough socioeconomic hard stuff in Julien Nitzberg's film to counteract the intentional and unintentional humor.