If Dick Cheney believes he can prove that torture saved us from terrorist attacks, why does he oppose a full investigation? 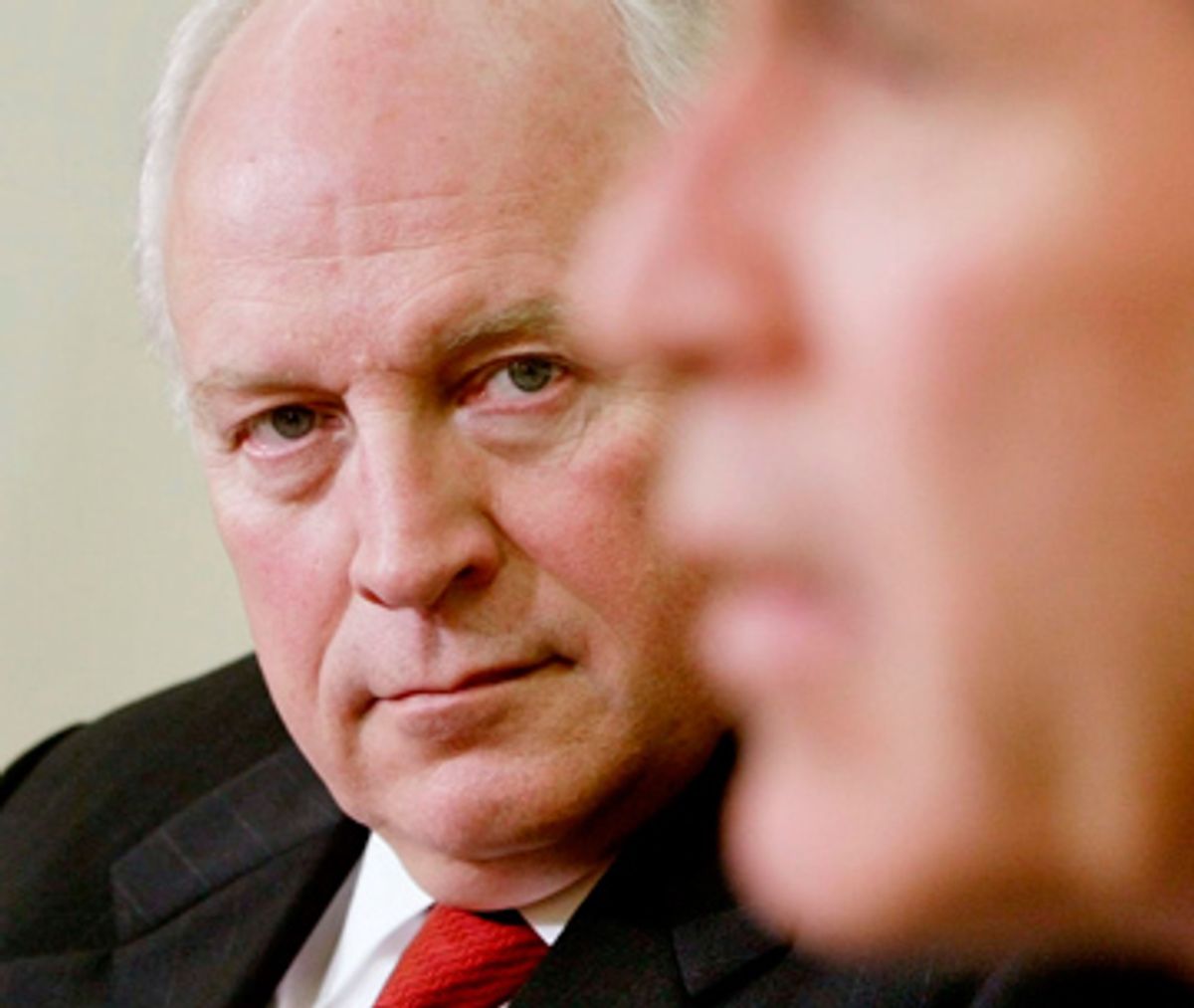 Defenses for the Bush administration’s advocates and perpetrators of “enhanced interrogation” –- that euphemism for torture from the Nazi era –- are narrowing as the public learns more about their appalling record. The repeated claims that waterboarding, for example, was not illegal or should not be categorized as torture sound increasingly feeble to anyone who understands that we have prosecuted such acts as war crimes for more than a century, whether committed by our enemies or our own personnel.

So the ultimate justification is not that torture isn’t torture or that torture is lawful and constitutional, but simply that torture works –- as Dick Cheney insists -- and that specific acts of torture curtailed terrorist plots and saved lives. The former vice president says that previously classified information will vindicate the cruelties and abuses endorsed by him, former president George W. Bush, former CIA directors George Tenet and Michael Hayden, and a host of lesser figures from the old regime.

It is a claim long overdue for scrupulous examination, rather than inflated proclamation on talk radio and cable television. The surest sign that Cheney and his supporters don’t believe their own boasts is their horrified resistance to a bipartisan truth commission -- which could undertake the essential task of gathering documents, hearing testimony and sorting out facts from propaganda. Despite the constant repetition of warnings that without torture we would be left vulnerable to terrorism, the record so far offers scant proof that the Bush administration’s crude brutality somehow rescued the nation from disaster.

Set against the assertions of Cheney and company, whose credibility has languished ever since the fiasco of the missing Iraqi WMDs, are the statements of other officials who have had continuing access to highly classified briefings about the “war on terror.” In a floor speech last spring, Senate Intelligence Committee chair Jay Rockefeller (D-WV) bluntly disparaged the effectiveness of the torture program. “Although the CIA has described the information obtained from its program,” he said, “I have heard nothing that leads me to believe that information obtained from interrogation using harsh interrogation tactics has prevented an imminent terrorist attack.” Two months later, a reporter for Vanity Fair asked FBI director Robert Mueller in London whether he knew of any terrorist attacks on the United States that had been thwarted thanks to intelligence obtained through "enhanced techniques" of interrogation. At first reluctant to answer that question, the FBI chief finally said: “I don't believe that has been the case."

The CIA Inspector General appears to have reached a similar if not identical conclusion in a still-secret report that remains the subject of freedom-of-information litigation by the American Civil Liberties Union. The IG report on the agency’s role in the torture scandal is quoted extensively, however, in the Justice Department documents released by the Obama administration last week –- notably in the long memo of May 30, 2005 sent by Stephen Bradbury of Justice’s Office of Legal Counsel to John Rizzo, the CIA’s senior deputy counsel. Although Bradbury himself enthusiastically endorsed the torture program, like nearly every other political appointee in the Bush administration, he acknowledged that the inspector general had found it “difficult to determine conclusively whether interrogations have provided information critical to interdicting specific imminent attacks.”

In other words, the CIA’s own internal investigation could not confirm that “enhanced interrogation” had in any instance achieved the single goal that supposedly justified violations of American and international law: the disruption of a “ticking bomb” plot.

While Bradbury notes that “interrogations have led to specific, actionable intelligence as well as a general increase in the amount of intelligence regarding Al Qaeda and its affiliates,” torture is supposed to produce not merely more information, even if it is vaguely “actionable,” but critical and timely information that saves lives. Otherwise, there is no excuse for abandoning the traditional law enforcement style of interrogation that has successfully extracted the truth from gangsters, prisoners of war, and terrorists for many years.

That must be why the Bradbury memo goes on to mention what eventually became known as the “Library Tower” plot. “You have informed us that the interrogation of [Al Qaeda leader] KSM [Khalid Sheikh Muhammad] -- once enhanced techniques were employed -- led to the discovery of a KSM plot, the ‘Second Wave,’ to use East Asian operatives to crash a hijacked airliner into’ a building in Los Angeles,” namely the Library Tower office building. Virtually every right-wing talk jock and Fox News personality, as well as former Bush aide Mark Thiessen, has cited that passage as proof of the virtues of torture. But that claim is implausible, as astute critics have deduced, because the Bush administration has long claimed that the Library Tower plot was busted in early 2002 -- months before KSM was turned in by an informant claiming a $25 million reward.

Nothing we have learned so far about the individual cases when interrogators employed various kinds of torture -- including a number when detainees were in fact killed -- inspires confidence in the program’s efficacy, let alone its morality or legality. Former CIA agent John Kiriakou admitted publicly in December 2007 that he had first-hand knowledge about the waterboarding of Abu Zubaydah, allegedly a high-ranking lieutenant to Osama bin Laden. According to Kiriakou, Zubaydah had resisted questioning until he underwent simulated drowning for 35 seconds. “It was like flipping a switch,” said the former officer in a widely quoted interview with ABC News. "The next day, he told his interrogator that Allah had visited him in his cell during the night and told him to cooperate. From that day on, he answered every question," Kiriakou said. "The threat information he provided disrupted a number of attacks, maybe dozens of attacks."

Except that today we know that turning Zubaydah wasn’t like flipping a switch, because he was actually subjected to waterboarding not once but more than 80 times –- and at least one of those sessions seems to have been demanded by CIA headquarters against the advice of the agents conducting the interrogation.

Moreover, as Ron Suskind reported in "The One Percent Doctrine," his 2007 book on counter-terrorism, Zubaydah was neither a top operational aide to bin Laden, as Bush and other officials claimed, nor a source of useful intelligence. He was instead a mid-level functionary, afflicted with bouts of mental illness, and unable to provide real information on any impending plots. Whatever useful information Zubayda could divulge, he had revealed before the waterboarding began under questioning by Ali Soufan, a top FBI counterterrorism agent fluent in Arabic, who persuaded the prisoner to reveal useful information about Khalid Sheikh Muhammad, the alleged mastermind of 9/11, and Jose Padilla, the Chicago-born al-Qaida footsoldier later accused of plotting to detonate a radioactive bomb in the United States. “There was no actionable intelligence gained from using enhanced interrogation techniques on Abu Zubaydah that wasn’t, or couldn’t have been, gained from regular tactics,” wrote Soufan in a blistering New York Times op-ed article published last Wednesday.

Yet by applying the right amounts of pain and fear, someone like Zubaydah might be induced to “confess” that al-Qaida was working on weapons of mass destruction with Saddam Hussein’s Iraq –- so the CIA turned the hoses on after Soufan’s FBI team was removed from the case (as Jane Mayer first reported in her award-winning book, "The Dark Side"). Zubaydah later recanted most of what he had told his interrogators, including stories of plots to blow up the Brooklyn Bridge and the Statue of Liberty as well as nuclear plants, shopping malls and dozens of other places, all of which kept lots of agents busy with pointless investigations. He had told them what he thought they wanted to hear, simply to get them to stop hurting him.

The same dismal pattern can be traced in the case of Ibn al-Shaykh al-Libi, an al-Qaida operative also known as the Libyan, who told CIA interrogators in 2002 –- after several interludes of threatened and actual torture –- that Saddam’s Iraq had trained two of his fellow jihadis in the use of chemical and biological weapons. After still more abuse, he recalled that three more al-Qaida men had visited Iraq to learn about nuclear weapons. It was all nonsense, invented by the Libyan to fend off the torturers and later recanted by him, but not before his claims tainted several intelligence reports, including the crucial National Intelligence Estimate on Iraq of November 2002.

None of this is meant to suggest that prisoners who had water poured into their noses -- or were hung up by their hands or shoved into little coffins for hours on end -– never blabbed any useful intelligence. Perhaps there were truly dozens of examples of terrifying conspiracies that were only trumped at the eleventh hour, thanks to a well-administered bout of torture. Perhaps there was just one or, as seems most likely, none. In any case, we need to learn what Cheney meant when he referred to “memos that showed the success of the effort” and “reports that show specifically what we gained as a result of this activity.” The establishment of a truth commission would allow the former vice president or anyone else to tell us what we supposedly gained from official crimes that have been banned since the earliest days of the republic.