The Specter of a shrinking GOP 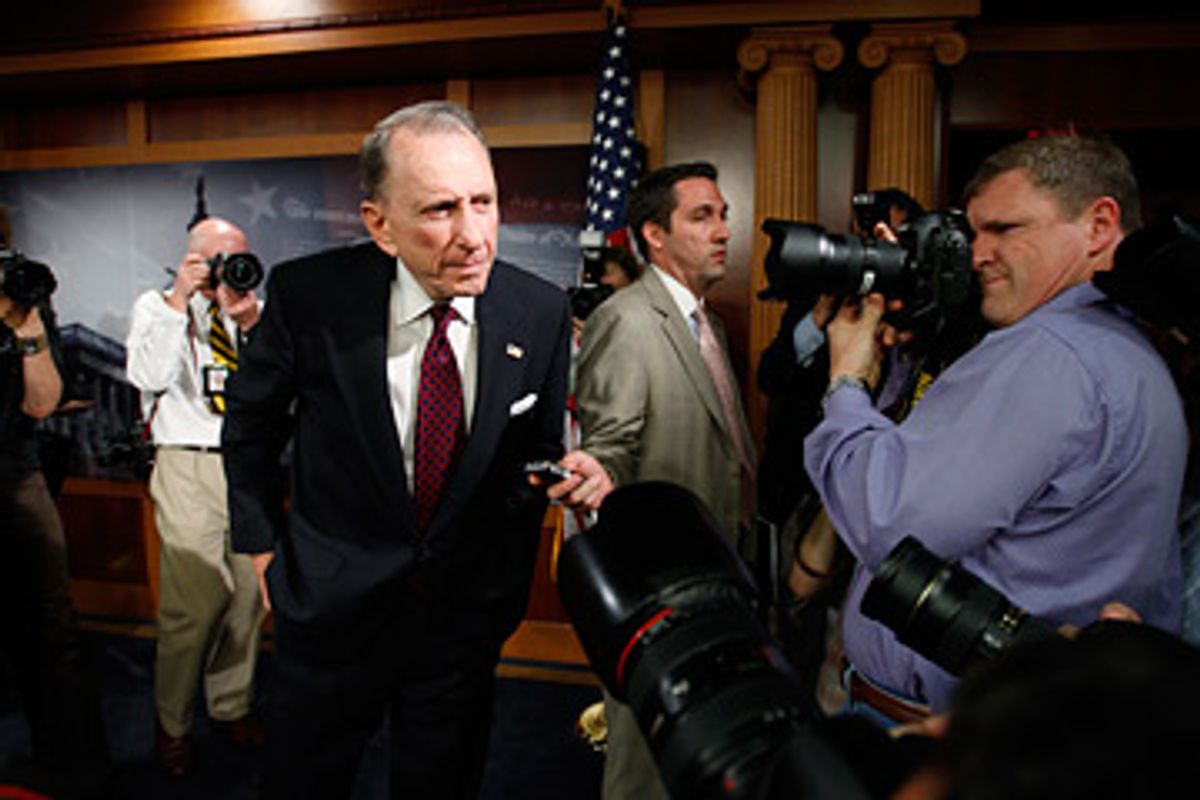 The breaking point for Arlen Specter didn't come when his fellow Republicans practically made him sign a loyalty oath a few years ago. It didn't come when the GOP lost its majority in 2006. And it didn't even come when Republicans picketed his office in Allentown, Pa., earlier this year over his support for a $787 billion economic stimulus plan.

No, what finally shoved Specter out of the Republican Party and into the waiting arms of Senate Democrats on Tuesday was something a bit more pragmatic. "I got my own poll results back last Friday -- late last week, and consulted with my campaign managers," Specter told reporters matter-of-factly in the Capitol, a couple of hours after he said goodbye to the GOP. He didn't say exactly what that poll showed, but it couldn't have had good news about his primary battle against die-hard conservative Pat Toomey, a refugee from the anti-tax jihadist Club for Growth. As soon as Specter made his move, the polling firm that had done the survey for him, Public Opinion Strategies, quit (and pollster Glen Bolger posted an ode to beer and crazy people on his Twitter feed).

Polls had been showing for a while that Specter would probably lose the nomination. And if there's one thing that will motivate a U.S. senator into finally taking a plunge on a big decision, it's the fear of losing. Never mind that Specter had said, just six weeks earlier, that he was "staying a Republican because I think I have a more important role to play there." That was before he realized he couldn't keep both his job and his party label.

But Democrats weren't exactly complaining about the opportunistic play by the newest member of their caucus. Specter's switch will mean the Democrats get a filibuster-proof 60-vote majority -- though they'll have to wait until Al Franken finally laughs off Norm Coleman's endless legal battle in Minnesota to hold on to his Senate seat. Senate Democratic leader Harry Reid, of Nevada, agreed to count Specter's 29 years in Washington as if he'd been a Democrat all along for seniority purposes, though he won't strip any current committee chairs of their power to accommodate the new guy. Liberal bloggers may be grumbling that Specter shouldn't be able to run as a Democrat without a primary challenge from a more progressive opponent, but party officials in Washington and in Pennsylvania are not likely to look kindly on an intramural contest. Pennsylvania Gov. Ed Rendell had already promised Specter a month ago that he would be unopposed in a Democratic primary if he switched parties.

President Barack Obama gave a thumbs-up to reporters who shouted a question about Specter to him as he walked into the White House in the afternoon. Aides said he welcomed Specter warmly in the morning -- and planned to endorse him and raise money for him in next year's campaign. (Specter's colleague from Pennsylvania, Bob Casey, apparently hadn't gotten the memo yet, telling Salon in the early afternoon that it was "early" to think about politics.) The White House should be pleased, for the most part. A shrunken Senate Republican caucus means the only way Congress can block Obama's agenda is if Democrats can't hold their own ranks together, though that's still entirely possible, on issues ranging from healthcare to union elections. After all, moderate Democrats like Ben Nelson of Nebraska, Evan Bayh of Indiana and the original apostate, Joe Lieberman of Connecticut, share the same devotion to political self-preservation that made Specter jump.

In a news conference Tuesday, a relaxed Specter had no trouble justifying a move that most lawmakers would have felt ashamed to defend so nakedly. "I'm putting principle at the top of the list," he said. "The principles that I subscribe to are my independence, which I will retain regardless of party label." In other words, the first principle is: win. "I believe that I have a great deal to offer in terms of continuing service," he continued. "I'm full of vim, vigor and vitality." He joked that Republicans didn't complain when he told them he was leaving. "[Mississippi Sen. Thad] Cochran said at least he wouldn't have to go to Erie anymore to campaign for me." And he promised to cause as many headaches for Reid as he has for Senate GOP boss Mitch McConnell, of Kentucky. "It all depends on whether those fellow Democrats are wrong and stubborn," Specter said. "And if they are, I will bump heads with them. And if they're reasonable, that is [if they] agree with me, [that's] copacetic."

Though Specter spun the move as a natural reaction to ideology run amok in the GOP, Republicans weren't exactly sorry to see him go. With reporters, Specter lashed out at the Club for Growth: "They don't make any bones about their willingness to lose the general election if they can purify the party." The Club for Growth, naturally, responded in kind. "This cynical play for political survival calls into question whether Pennsylvania taxpayers can believe anything Arlen Specter says," the club's president, Chris Chocola, said in a statement. "If his only principle is personal ambition, can he really be trusted with the serious issues that face our country?" Chocola, who lost his Indiana congressional seat in 2006 in part because of past support for Social Security privatization, took over the presidency of the Club for Growth just two weeks ago, when Toomey quit to run against Specter.

Rush Limbaugh announced that Specter should have taken John McCain with him -- which, even considering the source, was a little extreme, since it was only six months ago that people like Limbaugh were declaring McCain the nation's final bulwark against Obama's socialist agenda. That didn't surprise moderate Republicans. "It seems like the base of the Republican Party is doing everything it can to drive everyone away from the party who's not in complete 100 percent agreement with them," said Dan Gurley, who was the GOP's national field director in 2004, until he was drummed out of Republican politics for acknowledging that he was gay. "You've taken a political party that was at various times a dominant political party in the U.S. and you're practically turning it into a regional political party, which simply cannot have a future in the United States."

Within the clubby walls of the Senate, Specter's former comrades in arms were a little nicer. Sen. Bob Corker, a Tennessee Republican, said Specter was met with "respect" at his lunchtime farewell. Maine Republican Olympia Snowe -- one of the only moderate GOP members left -- told reporters she understood why Specter did what he did. "You haven't certainly heard warm encouraging words about how [the Republican establishment] views moderates," she said. "Ultimately, we're heading to having the smallest political tent in history, the way things are unfolding." (Ever the optimist, conservative South Carolina Republican Sen. Jim DeMint later told CNN: "We're seeing across the country right now that the biggest tent of all is the tent of freedom.")

The prospect of Specter's leaving the party couldn't have been a surprise to Republicans, though. A couple of months ago, Vice President Joe Biden had teased Specter at a public appearance in Philadelphia, saying, "In his heart, I know he's a Democrat," and genially -- mostly -- trying to push him into leaving the GOP. Gov. Rendell got into the act, too, promising to help raise money for Specter if only he left the Republicans behind. At the time, Specter ducked what could have been an awkward moment with a joke, saying that if he became a Democrat he wouldn't need the fundraising help.