How Obama can succeed in the next 100 days and beyond

His first 100 days has been a sprint. But the success of his second 100 days -- and his presidency -- hinges on a series of tough decisions. 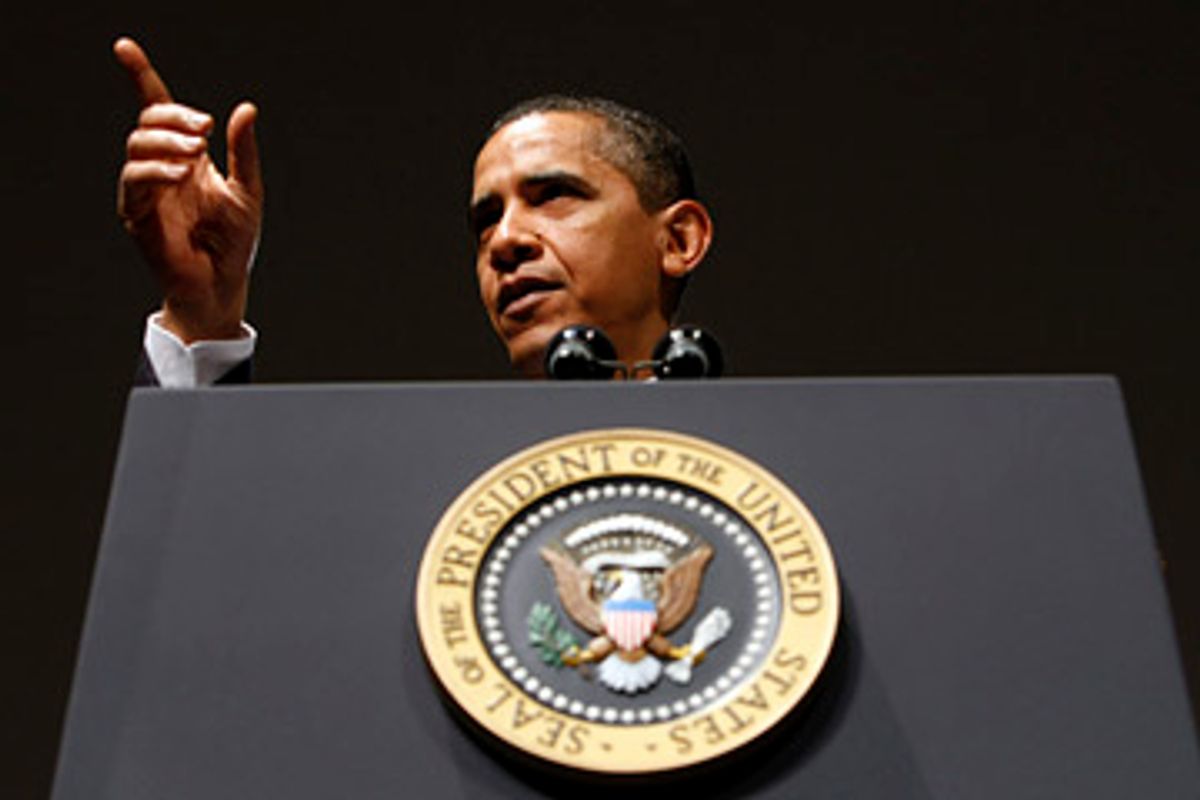 Before Inauguration Day, President-elect Barack Obama said he wanted to hit the ground running. Instead, he hit the ground sprinting and hasn't stopped.

Consider: A $787 billion stimulus package. A 10-year budget including universal health insurance and a cap-and-trade system to combat global warming. Subsidies to help distressed homeowners stay in their homes. Public-private partnerships to clean up the big banks. A bailout of the auto companies. New regulations to clean up Wall Street. A G-20 meeting to harmonize global economic policies. A proposal to regulate greenhouse gas emissions. A thaw in relations with Cuba and Venezuela. Overtures to Iran. A start to immigration reform. Even a dramatic rescue from pirates.

He also has done this without breaking a sweat. Obama is the serene center of the cyclone -- exuding calm when most Americans are petrified about paying the monthly bills, offering assurance when everyone in the world is worried about loose nukes falling into the wrong hands.

All this activity has made the right angry and the left uneasy. But a whopping 65 percent of Americans think highly of him. And no president since John F. Kennedy has received such an enthusiastic welcome around the globe. By almost any measure, his presidency so far has been a triumph. (I give him only a C-plus on his economic policies so far, but that's mainly because of a provisional F on the bank bailout.)

Yet Obama's success has rested on several delicate balancing acts. Whether he continues to succeed will depend on how well he shifts his balance in the months ahead.

The stimulus and bank bailouts have required the government to pump almost $1.5 trillion into the economy and the Federal Reserve Board to dramatically expand the money supply. This makes sense in the short term. With almost 1 out of 6 Americans either unemployed or underemployed - and consumers and businesses still tightening their belts -- government has to be the spender of last resort. But as the economy recovers, Obama will have to rein in government deficits. If he does this too early, he risks prolonging the deep recession. Yet if he waits too long, he risks wild inflation.

Obama's 10-year budget presents the most ambitious and progressive vision of any president since FDR. But when it come to governing, Obama has been cautious and incremental. His stimulus was smaller than even conservative economist Martin Feldstein recommended. He has been unwilling to take over the banks. He won't push Congress on the Employee Free Choice Act. His mortgage relief program is modest. He doesn't want to prosecute CIA torturers. Yet if he wants to be a transformative president, he's got to move boldly. Universal health insurance will be his first big test.

So far Obama has focused on the home front, as he should, given the economy's plunge. But he's confronting a major foreign-policy challenge in Pakistan. And other challenges are emerging in Iran, North Korea, Russia, China and stateless regions of the world. So the big question here is whether foreign policy will come to define his presidency, notwithstanding his domestic ambitions. Presidents don't have much control over this. FDR's first two terms were defined by the Great Depression; his last was dominated by World War II. Lyndon Johnson wanted to create the Great Society but got bogged down in Vietnam. George W. Bush didn't know that his administration would be defined by Iraq.

At first it looked as if Obama was hiring a "team of rivals" who would battle out hard policy problems. This management style allows a president to hear and consider contrary points of view, but it can also be chaotic. Yet Obama seems to be opting for strong White House "czars" instead, such as Lawrence Summers on the economy, Carol Browner on the environment and Rahm Emanuel on politics. This approach saves presidential time and focuses responsibility, but it can suppress contrary views. And it's often those contrary views that presidents need to hear to avoid major errors.

Working with Republicans or taking them on?

By temperament and inclination, Obama prefers to reach across the aisle and court Republican support. Yet so far this tactic has been notably unsuccessful. Republicans have moved almost in lockstep against him. They're already gearing up for the 2010 midterms, staging anti-tax rallies and laying the foundation for a major assault on his presidency. They fantasize about repeating the coup Newt Gingrich pulled off in November 1994. At some point before then, Obama will have to take off the gloves.

Making nice to Wall Street or kicking its butt?

Almost $600 billion has been poured into big Wall Street banks with nothing to show for it. They're still not lending to Main Street, still paying their top executives princely sums, and still issuing dividends and looking for acquisition targets. Yet apart from a few rhetorical blasts at a few Wall Street executives, Obama has so far shown remarkable solicitude to the banks because he thinks he needs their cooperation to get credit moving again. At some point, though, he'll have to get tough.

So far Obama has found a workable balance in all these domains. But all require increasingly fancy footwork, and some rebalancing will be needed. The central question for the next 100 days is how deftly he finds new footing.