Tribeca: From fake suburbia to Vegas, with devil worship

Foulmouthed Geena Davis can't save a suburban yarn made by aliens (or Australians); a mythic fable of desert greed; a neo-retro horror delight. 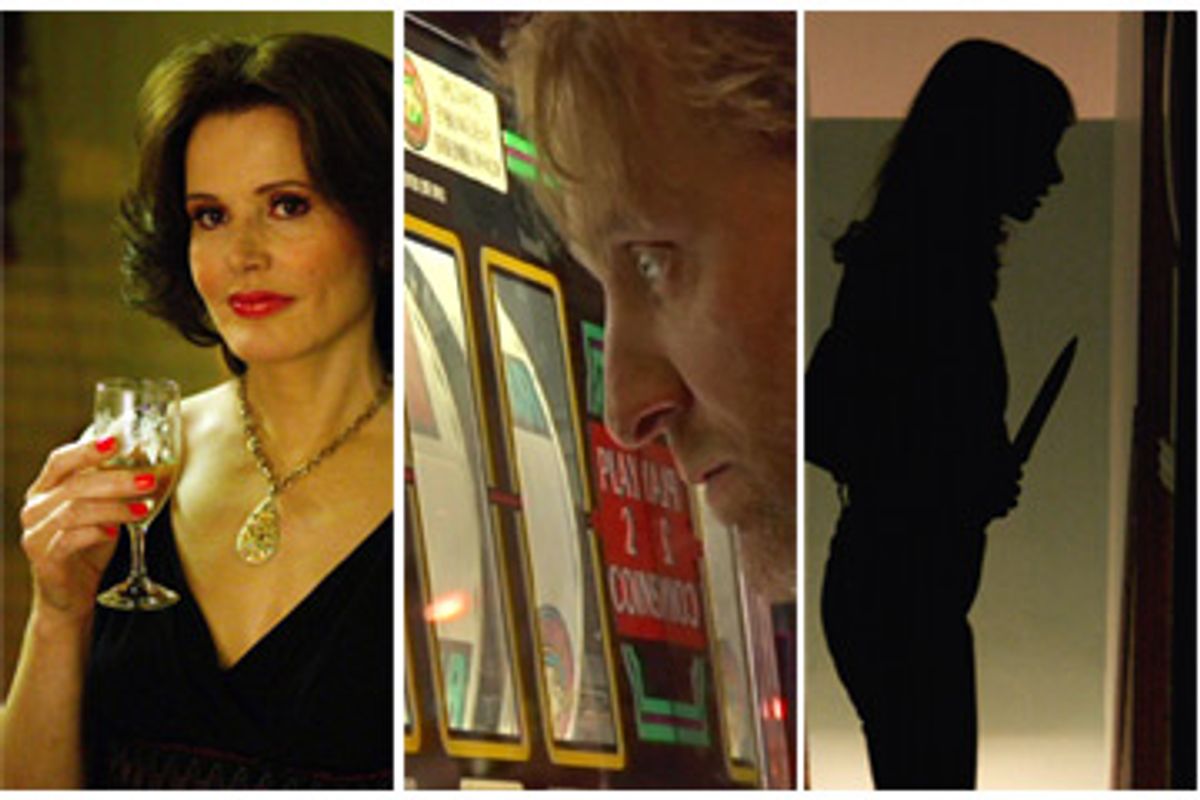 Images from "Accidents Happen," left, "Vegas: Based on a True Story," and "The House of the Devil."

When it comes to independent films premiering at the Tribeca Film Festival, I am apparently no better than a moth battering itself to death against the scalding glass of a Coleman lantern. Time and again I write stories bemoaning exactly the kind of mid-grade, B-list-celebrity, unlikely-to-be-released film that typically debuts at Manhattan's spring fest -- and yet there I was late last week, spending a lovely spring evening inside the Tribeca Performing Arts Center, confronted with an '80s dysfunctional-family comedy called "Accidents Happen" that was apparently made by aliens.

No, I should clarify that. It wasn't made by aliens but by Australians. Which would be one thing -- and an entirely acceptable thing! -- if the movie were actually set in Australia. Instead, director Andrew Lancaster uses locations in suburban New South Wales and tries to pass them off as New England, leading to the fact that everything about this overstylized, sub-"American Beauty" flick that could feel somehow subtly wrong does so. It isn't merely that you can hear the supporting actors struggling with their miscellaneous and stereotypical Amurkan accents, and almost hear them muttering under their breath, "We drive on the right side of the road! The *right* side! PresidentReaganPresidentReaganPresidentReagan!"

The vegetation is wrong, the license plates are wrong, the police uniforms are wrong. In a long career of visiting American suburban homes, I have never seen one that looked like the boxy, compact, low-ceilinged postwar houses of "Accidents Happen." I suppose if Lancaster had gone ahead and made a movie set in 1980s Australian suburbia, a setting he might possibly understand, he wouldn't have gotten a deliciously foulmouthed performance out of Geena Davis as the embittered mom of this film's disastrously unfortunate central clan. Davis, along with a pathological desire not to appear rude, was the only thing keeping me in my seat through this hackneyed saga of family disrepair and redemption, much of it narrated by that disembodied, half-ironic expository voice that becomes a floundering storyteller's last desperate refuge.

Amir Naderi's no-budget drama "Vegas: Based on a True Story," which premiered on Friday night, is also imperfectly realized storytelling but in a much different vein, and is immensely more satisfying on both a visual and a philosophical level. A prominent Iranian filmmaker of the '80s, Naderi emigrated to the United States 20 years ago and has been making quasi-experimental work ever since, defiantly out of step with either indie convention or the Hollywood mainstream. At first "Vegas" seems to fit into the recent wave of American minimalist realism, as a yarn about a working-class family struggling with alcoholism and gambling problems on the desert fringe of America's prototypical 21st-century boomtown.

But when a guy named Brian in a Marine Corps uniform starts hanging around the Parkers' unimpressive modular house, claiming that he used to live there and wants to buy the place back for an improbably high price, "Vegas" moves in a more metaphorical direction and stays there. Brian may be a scam artist or a supernatural agent of destruction: The results are about the same. Once he convinces the family's underemployed dad that the proceeds of a legendary Vegas robbery may be buried on the premises, a virus is unleashed that will literally and figuratively destroy the Parkers' home, and eat away their tenuous hold to decency and respectability.

Naderi's nonprofessional cast is likable enough, especially Zach Thomas as 12-year-old Mitch Parker, but screenwriting and characterization are not this film's strengths. Naderi often views them from a distance, against the magnificently unfriendly desert of low-end suburban Vegas. Ultimately he's reaching for myth more than realism, and among the myths that most interest him are John Huston's great "Treasure of the Sierra Madre" and Erich von Stroheim's largely lost silent classic "Greed." "Vegas" was made before people like the Parkers started having their houses repossessed by the thousands; in that sense and various others, it really is based on a true story.

New York horror director Ti West ("The Roost," "Trigger Man") has built his brief career on reclaiming the genre's tradition of atmosphere and suspense and resisting endless gore and over-the-top effects. So it may be surprising to learn that he's been hired to direct the next installment of Eil Roth's "Cabin Fever" series. But as West's Saturday-night Tribeca premiere, "The House of the Devil," makes clear, he shares Roth's adoration for the conventions of 1980s horror. Bringing together a cute college-age babysitter (Jocelin Donahue), a creepy older couple (Tom Noonan and Mary Woronov), an isolated Victorian house and a lot of high-waisted jeans and feathered hair, "House of the Devil" is great fun.

One may wonder what the point is of precisely evoking a certain variety of low-budget thriller, circa 1982 -- but I guess if you have to ask, then the movie isn't working for you. "House of the Devil" isn't exactly or consistently a parody, even if Greta Gerwig's acid-washed, dumbass best-friend character nudges it in that direction. (As does the presence of Woronov, an Andy Warhol intimate from the '70s who might be best described as a female drag queen.) But then, how sincere is a film that seems to view the 1976 Karen Black-Oliver Reed vehicle "Burnt Offerings" as the Platonic form of cinema? Be that as it may, in looking backward West raises the possibility of opening up horror to general audiences again. He's got a big hit somewhere in his future.