A sob story from the vultures who forced Chrysler into bankruptcy

Hedge fund operators are claiming the government offered them a raw deal. But we should spare no tears for people who specialize in rending the rotting flesh of companies in trouble. 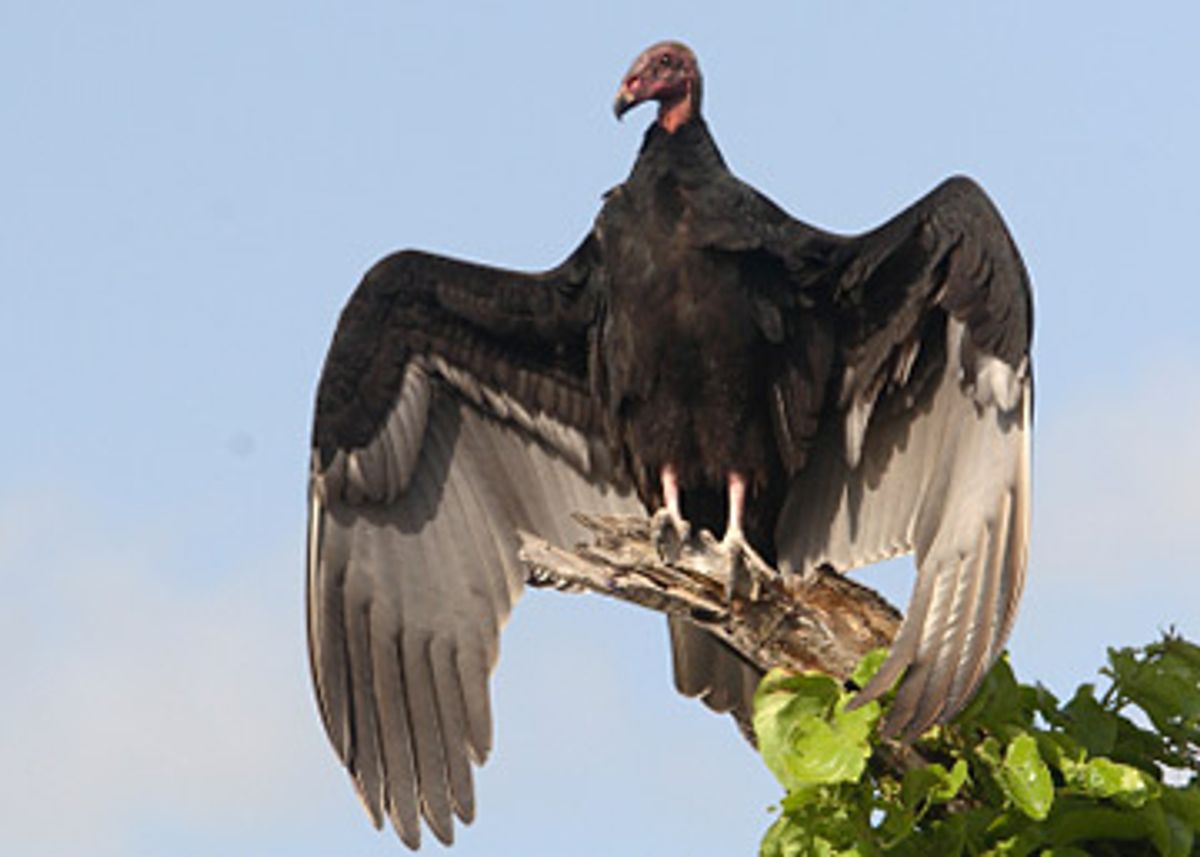 "I am in turmoil," says Chrysler investor Geoffrey Gwin in a Wall Street Journal feature story published today. According to reporter Serena Ng, Gwin, the "principal" of the Group G Capital hedge fund, "is wrestling with the knowledge that the retirement plans of some 80,000 Americans may rest in his hands."

"At the heart of his angst," reports the Journal, "Mr. Gwin says, lies his own family's experience. His father, a 30-year veteran of Delta Air Lines, lost most of his pension and health-care benefits after the airline filed for bankruptcy protection in 2005."

While he may swallow hard and vote to help salvage parts of the company, Mr. Gwin says his father's treatment makes him loath to pave an easy road for Chrysler.

"It's very hard for me to deal with this," says the younger Mr. Gwin, a 41-year-old father of three. "As horrible as the situation looks for Chrysler's employees, I keep thinking about how horrible my own family felt when Delta was going to file for bankruptcy and my father's pension was going to take a hit. No task force or the federal government came to his aid then."

So... in other words: No bailout for Dad, so the hell with Chrysler's workers.

The Journal also published an overwrought "letter" from Gwin explaining all the anguish that the head of this "small investment fund" feels at his unexpected responsibility for Chrysler's future.

I call bullshit. If you're looking for an example of the "speculators" that President Obama attacked in his speech on Chrysler today, Group G Capital is a prime suspect.

Not once in Serena Ng's article do you hear Group G Capital described by its true name: It is a distressed debt hedge fund that specializes in swooping in on companies who are in big trouble, buying their debt at a discount to face value, then hoping to eke out a profit either in an out-of-court restructuring deal or in bankruptcy court, where they'll play hardball.

Times are tough for a lot of people right now, but for distressed debt funds -- not so much. By one recent estimate there are trillions of dollars' worth of "distressed" debt available today. Hundreds of hedge funds are playing in this corner of the market. Business has never been better! Just listen to Gwin quoted in this MarketWatch story from three weeks ago.

Growing up in Peachtree City, Ga., Geoffrey Gwin often fished in the nearby lake.

"There were only two types of fish in it and generally you fished in your own corner," said the founder of distressed debt hedge fund firm Group G Capital Partners LLC. "That's what distressed investing was like a decade ago."

"Now it's like fishing in the ocean and there are so many different fish and fishermen," he added.

The recent boom in leveraged buyouts, followed by the current credit crisis, may trigger a wave of corporate bankruptcies in coming years. That's good news for distressed debt investors like Gwin who will have more fish to catch.

Often referred to by critics (who now include Rep. John Dingell, D-Mich.) as "vulture funds," a hungry flock of distressed debt funds are all over Chrysler's decaying flesh. In addition to Group G Capital, a couple of other brand-name representatives include Stairway Capital and Xerion Capital (now owned by Perella Weinberg.)

Stairway Capital is a middle-market investment fund that provides capital to companies experiencing financial or operational difficulties, or which may be undervalued or otherwise represent an opportunistic investment.

An argument can be made that, as with your run-of-the-mill carrion feeders, distressed debt funds fill an important ecological niche in the capitalist ecosystem. You can think of them as facilitators of the kind of "creative destruction" that keeps natural selection hopping on Wall Street.

But now might not be the best time to make that case. Especially when you consider this: We don't know for sure whether one of the reasons why the hedge funds refused to make a deal with the government was that they had bought credit default swaps insuring that they would get a nice payoff in the event of bankruptcy. But it doesn't take a great leap of the imagination to think that distressed debt funds are exactly the breed of hedge fund sharks most likely to engage in such behavior. It's a perfect fit for their ultra-cutthroat business model.

So spare us the sob story, Geoffrey Gwin. You're in this game to make money by speculating on the bonds of companies that are in big financial trouble. Now you've found yourself smack in the middle of a major political showdown between a pissed-off public and a Wall Street that hasn't had this little credibility since 1929. Too bad for you. Good luck sweet-talking the judge.