With swine flu now added to the many challenges confronting his 100-day-old administration, President Obama displayed a reassuring competence. 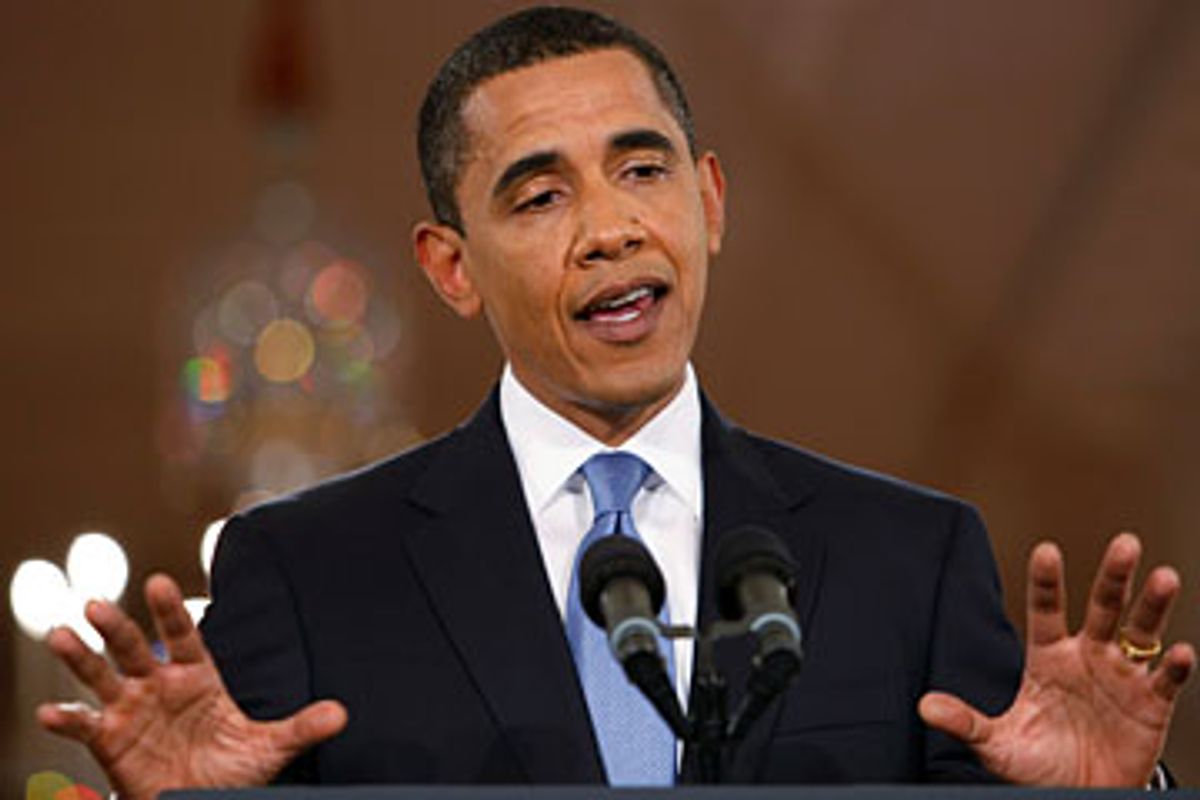 If you had asked him last year, a global swine flu pandemic spreading out of Mexico would probably not have been high on the list of what Barack Obama expected to be dealing with as his presidency entered its 100th day. But such is life in the White House -- which is, after all, only miles from where the latest flu cases were reported on Wednesday.

And so the prime-time news conference that Obama held Wednesday night to mark his first 100 days on the job was a schizophrenic affair, bouncing from swine flu -- officially now called "H1N1," out of deference to the delicate sensibilities of the U.S. hog-farming industry -- to torture to the best way to run an auto company.

"I'm always amused when I hear these, you know, criticisms of, 'Oh, you know, Obama wants to grow government,'" Obama said, laughing ruefully, at the end of the night. "No! I would love a nice, lean portfolio to deal with, but that's not the hand that's been dealt us."

Administration officials have tried to make it seem as though the White House was ignoring the 100-day milestone; the disparaging phrase "Hallmark holiday" has been thrown around the West Wing lately. But don't believe the hype. Although it's true that this is a completely artificial moment at which to judge an administration that could stretch for nearly 3,000 days, if Obama wins reelection in 2012, aides -- who generally feel pretty good about where things stand -- are happy to bask in some early reviews of their first few months. "Look, you guys create the wave, and we'll try to surf it a little bit," press secretary Robert Gibbs told reporters on Air Force One Wednesday morning, as Obama flew to a town hall in Arnold, Mo.

From the town hall to the press conference, Obama stuck to one overarching message: His administration was working hard to fix the problems George W. Bush left behind -- and doing a fine job of it. "We've got a lot of work to do, because on our first day in office we found challenges of unprecedented size and scope," he told the crowd in Missouri in the morning. "Our economy was in the midst of the most serious downturn since the Great Depression. Banks had stopped lending. The housing market was crippled. The deficit was at $1.3 trillion." The litany was no less depressing for being so familiar. Obama has repeated it almost daily since he took office, hoping to buy his own policies time to show results -- and to build political support for his ambitious agenda. "These challenges could not be met with half measures," he said at the town hall. "They couldn't be met with the same old formulas. They couldn't be confronted in isolation. They demand action that is bold and sustained."

By the usual standards of politics, Obama seems to have made the case, for now. Polling shows that nearly two-thirds of the country rates Obama favorably; almost as many people say they approve of the job he's doing. About half of the country says it's on the wrong track, compared to about 42 percent who say it's on the right track, but for a country mired in two wars and the deepest recession in generations, that's not so bad. (In fact, as Obama aides are quick to point out, those poll numbers have been steadily improving since he took office.)

Part of the reason he's had some success may be the loose, easy style he displayed Wednesday night. At one point, answering a complicated question from the New York Times' Jeff Zeleny about what has, among other verbs, "enchanted" him about the presidency, Obama stuck his left hand in his pocket, cocked his right foot behind him at an angle, and leaned on the lectern. (He had started the answer by teasing Zeleny for the question, raising his eyebrows and taking notes as he made the reporter repeat it.) Throughout the night, he dropped names, locations and facts into his answers in a way that showed he knew what he was talking about, and he managed to stop talking before most of his answers tipped into wonkiness.

Talking about the flu pandemic, Obama radiated calm. "This is a cause for deep concern but not panic," he said. He did, at one point, start to sound like the pediatrician in chief. "Wash your hands when you shake hands," Obama instructed anyone listening at home. "Cover your mouth when you cough. I know it sounds trivial, but it makes a huge difference. If you are sick, stay home. If your child is sick, keep them out of school." But the president -- as he said he wanted to do -- managed to convey concern without straying into panic over the pandemic.

On other topics, he was sometimes defensive. Pressed -- because he has previously said he believes waterboarding is torture -- about whether he thought the Bush administration had sanctioned torture, Obama wouldn't answer directly. "I believe that waterboarding was torture," he said. "And I think that the -- whatever legal rationales were used, it was a mistake." He defended the administration's decision to stick with Bush-era legal arguments about official secrets, as well. "We come into office. We're in for a week, and suddenly we've got a court filing that's coming up," he said. "And so we don't have the time to effectively think through, what exactly should an overarching reform of that doctrine take? We've got to respond to the immediate case in front of us." But Obama did indicate he'd be open to some reforms of the laws that allow the administration to declare information secret, which could encourage open-government reformers in Congress.

A day before, Arlen Specter had given Obama the best 100-day present any president could ask for, switching from Republican to Democrat and putting Obama's party within reach of a filibuster-proof majority in the Senate. But Obama used a question about the move to pivot to yet another paean to bipartisanship -- and a warning to Republicans, perhaps mindful of the fact that he needs to hold on to support from independents to stay in the public's good graces.

"To my Republican friends, I want them to realize that me reaching out to them has been genuine," he said. "If I'm taking some of your ideas and giving you credit for good ideas, the fact that you didn't get 100 percent can't be a reason every single time to oppose my position. And if that is how bipartisanship is defined, a situation in which basically, wherever there are philosophical differences, I have to simply go along with ideas that have been rejected by the American people in a historic election, you know, we're probably not going to make progress."

Though the news conference ended before 9 p.m., taking up less than an hour of prime-time TV, Fox had decided not to bump its regularly scheduled fare -- a show called "Lie to Me," in one of those coincidences you couldn't make up. The last two times Obama has appeared on national television, he's drawn more than 40 million viewers. If any of them tuned in again Wednesday, they probably didn't see much they hadn't seen before: a calm president, coolly giving the appearance that he would help the country recover from the state it's in. Which is probably exactly what the White House wanted. Sometimes, reruns aren't so bad, after all.