In his prime-time press conference, the president moved the argument away from whether torture works to whether it's un-American. 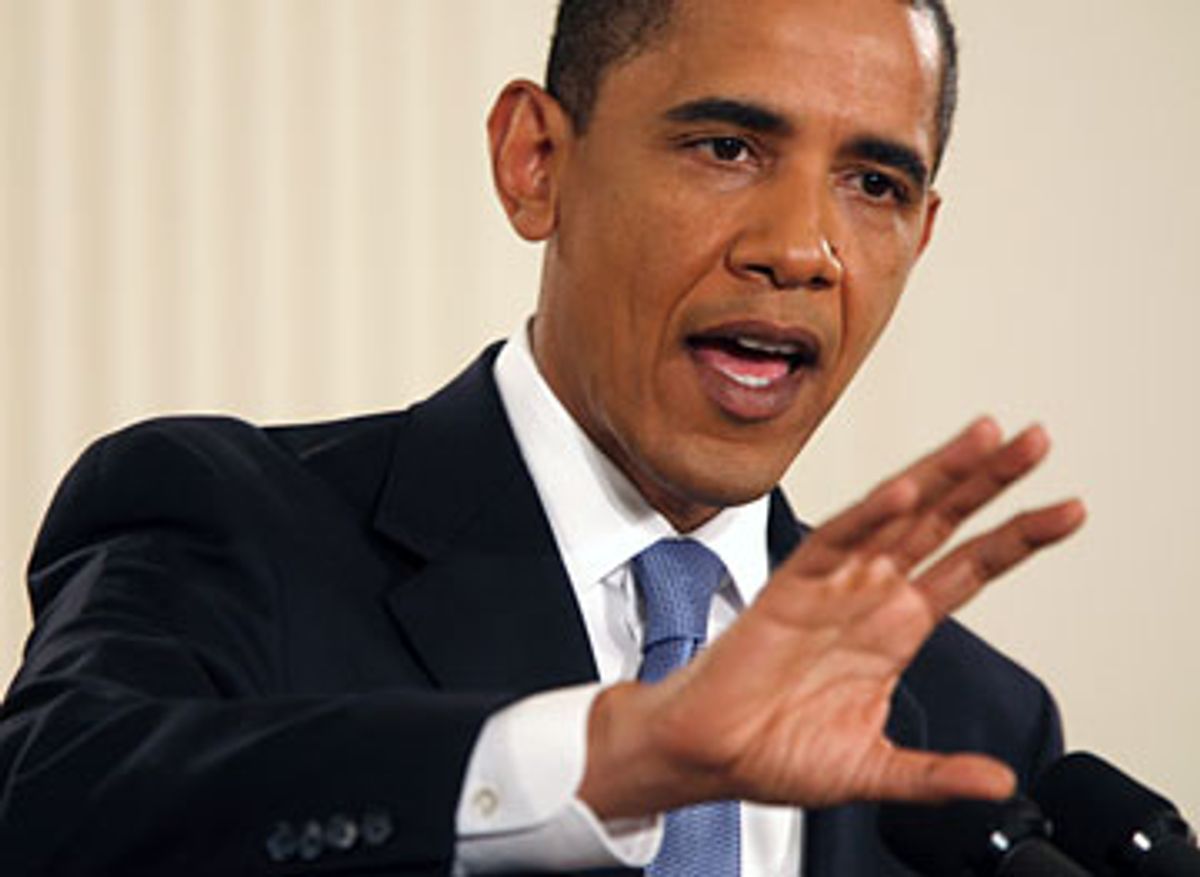 At some point tonight, President Barack Obama was going to be faced with a question about torture. And since he was going to get that question while on national television, he and his staff had to know in advance that they needed to come up with something better than his standard message about looking forward. They did.

It was lucky, too, because the question the president got on the issue, from ABC News' Jake Tapper, wasn't an easy one for him to deal with. "You've said in the past that waterboarding, in your opinion, is torture. Torture is a violation of international law and the Geneva Conventions. Do you believe that the previous administration sanctioned torture?"

That's not a particularly complicated question, but it is a very loaded one, and as such, Obama had to be very careful about what he said in response. Predictably, he dodged it -- or at least tried to. But in doing so, he may have moved the debate about torture in a different direction, one that may end up benefiting him.

"What I've said -- and I will repeat -- is that waterboarding violates our ideals and our values. I do believe that it is torture. I don't think that's just my opinion; that's the opinion of many who've examined the topic. And that's why I put an end to these practices," Obama said. He continued:

I was struck by an article that I was reading the other day talking about the fact that the British during World War II, when London was being bombed to smithereens, had 200 or so detainees. And Churchill said, "We don't torture," when the entire British -- all of the British people were being subjected to unimaginable risk and threat.

And the reason was that Churchill understood -- you start taking short-cuts, over time, that corrodes what's best in a people. It corrodes the character of a country. And so I strongly believed that the steps that we've taken to prevent these kinds of enhanced interrogation techniques will make us stronger over the long term and make us safer over the long term because it will put us in a -- in a position where we can still get information.

In some cases, it may be harder, but part of what makes us, I think, still a beacon to the world is that we are willing to hold true to our ideals even when it's hard, not just when it's easy.

The polls on the issue are inconsistent, and it's hard to tell whether most Americans think torture works. But clearly, people like former Vice President Dick Cheney think that if the debate is focused on torture's effectiveness, they have the advantage. And they're probably right, if only because of the instinctive pull of these sorts of things: If you don't know much about torture and its effects and uses, the natural first assumption is that it must work, especially in a "ticking time-bomb" situation. (Of course, that's not true, but that's not the point here.)

By taking the debate away from that, by depriving those who defend the previous administration's methods of the ability to appeal to the instinctual belief that torture must work and the short sound bite to that effect, Obama may have just given himself a leg up on the issue. True, he partially conceded his opponent's main point, but his position, too, can be easily summarized into a pointed and effective sound bite, and it has the added benefit of appealing to Americans' patriotism.

That said, of course, his response didn't answer Tapper's question. And though Tapper presumably knew he couldn't and wouldn't get a yes or no answer, to his credit, he followed up and tried to get the president to address it directly. This time, Obama's response was probably as close to a "yes" as he can get without crossing a line that might force him into a path he very clearly doesn't want to take. "I believe that waterboarding was torture," the president said. "And I think that the -- whatever legal rationales were used, it was a mistake."