Dick Durbin's confession ought to be major news, yet it won't be. Why not? 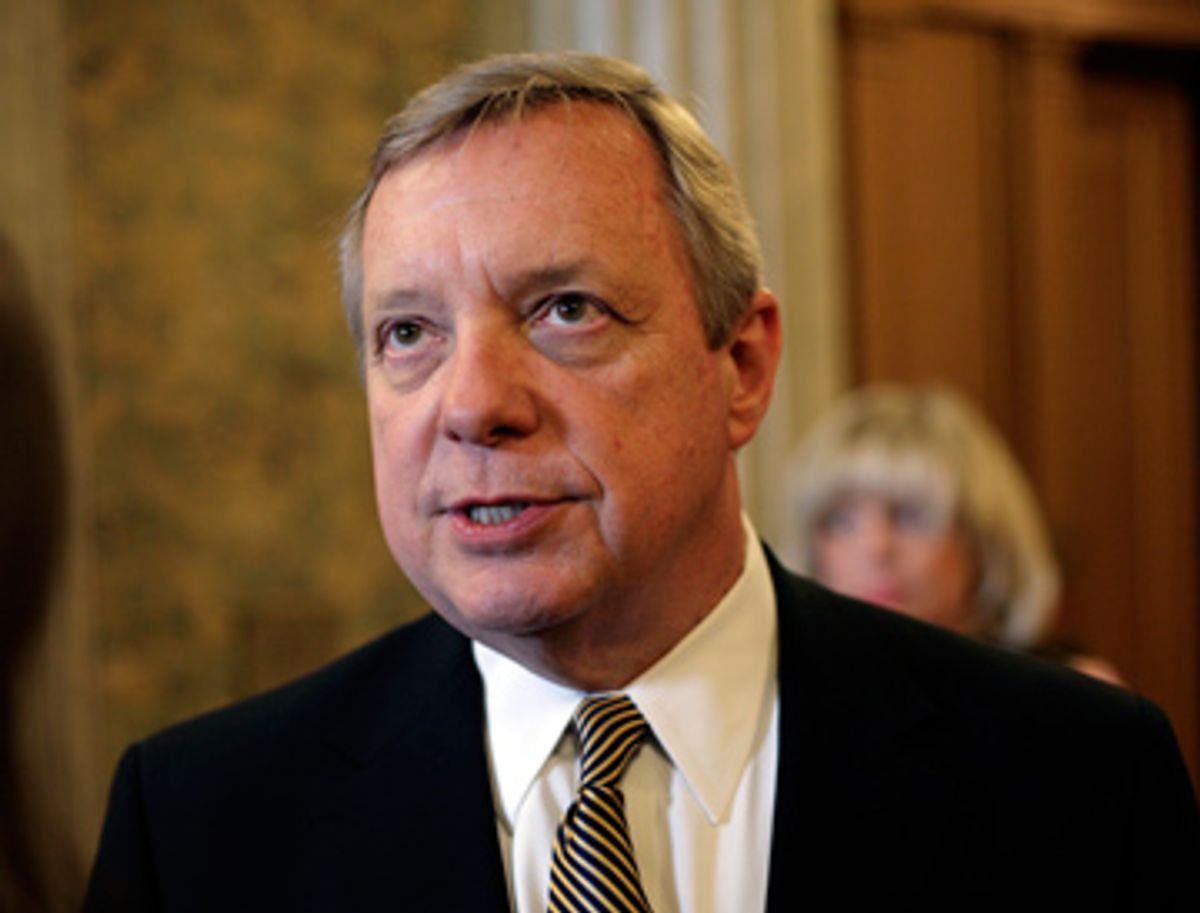 Sen. Dick Durbin, on a local Chicago radio station this week, blurted out an obvious truth about Congress that, despite being blindingly obvious, is rarely spoken:  "And the banks -- hard to believe in a time when we're facing a banking crisis that many of the banks created -- are still the most powerful lobby on Capitol Hill. And they frankly own the place."  The blunt acknowledgment that the same banks that caused the financial crisis "own" the U.S. Congress -- according to one of that institution's most powerful members -- demonstrates just how extreme this institutional corruption is.

The ownership of the federal government by banks and other large corporations is effectuated in literally countless ways, none more effective than the endless and increasingly sleazy overlap between government and corporate officials.  Here is just one random item this week announcing a couple of standard personnel moves:

Goldman Sachs' new top lobbyist was recently the top staffer to Rep. Barney Frank, D-Mass., on the House Financial Services Committee chaired by Frank.  Michael Paese, a registered lobbyist for the Securities Industries and Financial Markets Association since he left Frank's committee in September, will join Goldman as director of government affairs, a role held last year by former Tom Daschle intimate, Mark Patterson, now the chief of staff at the Treasury Department. This is not Paese's first swing through the Wall Street-Congress revolving door: he previously worked at JP Morgan and Mercantile Bankshares, and in between served as senior minority counsel at the Financial Services Committee.

So:  Paese went from Chairman Frank's office to be the top lobbyist at Goldman, and shortly before that, Goldman dispatched Paese's predecessor, close Tom Daschle associate Mark Patterson, to be Chief of Staff to Treasury Secretary Tim Geithner, himself a protege of former Goldman CEO Robert Rubin and a virtually wholly owned subsidiary of the banking industry.  That's all part of what Desmond Lachman -- American Enterprise Institute fellow, former chief emerging market strategist at Salomon Smith Barney and top IMF official (no socialist he) -- recently described as "Goldman Sachs's seeming lock on high-level U.S. Treasury jobs."

Meanwhile, the above-linked Huffington Post article which reported on Durbin's comments also notes Sen. Evan Bayh's previously-reported central role on behalf of the bankers in blocking legislation, hated by the banking industry, to allow bankruptcy judges to alter the terms of mortgages so that families can stay in their homes.  Bayh is up for re-election in 2010, and here -- according to the indispensable Open Secrets site -- is Bayh's top donor:

Goldman is also the top donor to Bayh over the course of his Congressional career, during which Bayh has received more than $4 million from the finance, insurance and real estate sectors: 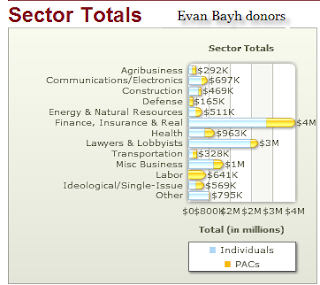 In a totally unrelated coincidence -- after the Government, as Matt Taibbi put it, enacted "a bailout program that has now figured three ways to funnel money to Goldman, Sachs"-- this is what happened earlier this month:

Goldman Sachs reported a much stronger-than-expected first-quarter profit Monday, bouncing back from its worst quarter as a public company. . . .

In reporting its results a day earlier than expected, New York-based Goldman said it earned $1.81 billion, or $3.39 a share, for the quarter ended March 31. Analysts surveyed by Thomson Financial were looking for a profit of $1.64 a share.

Goldman shares, which have surged more than 70% during the past month, continued rising late Monday, gaining about 4.7% for the day.

Nobody even tries to hide this any longer.  The only way they could make it more blatant is if they hung a huge Goldman Sachs logo on the Capitol dome and then branded it onto the foreheads of leading members of Congress and executive branch officials.

Of course, ownership of the government is not confined to Goldman or even to bankers generally; legislation in virtually every area is written by the lobbyists dispatched by the corporations that demand it, and its passage then ensured by "representatives" whose pockets are stuffed with money from those same corporations.  Just as one example, as Jane Hamsher reported about Bayh:

Bayh's little "lobbyist problem" is considered by many to be what tanked his Vice Presidential aspirations. His wife Susan earns about $837,000 a year serving on seven corporate boards, among them Wellpoint, a health insurance company for which Bayh helped secure a $24.7 million dollar grant. She's on the board of ETrade, even as Bayh is on the Senate Finance Committee.

Bayh wants people to believe he's a "moderate" who sits in the "center."

Meanwhile, the only citizen protests relating to this mass robbery are driven by anger at the government for treating bankers too harshly and unfairly -- one of the most classic manifestations of what Taibbi, in a separate piece, so aptly calls the "peasant mentality":

After all, the reason the winger crowd can’t find a way to be coherently angry right now is because this country has no healthy avenues for genuine populist outrage. It never has. The setup always goes the other way: when the excesses of business interests and their political proteges in Washington leave the regular guy broke and screwed, the response is always for the lower and middle classes to split down the middle and find reasons to get pissed off not at their greedy bosses but at each other. That’s why even people like [Glenn] Beck’s audience, who I’d wager are mostly lower-income people, can’t imagine themselves protesting against the Wall Street barons who in actuality are the ones who fucked them over. . . .

Actual rich people can’t ever be the target. It’s a classic peasant mentality: going into fits of groveling and bowing whenever the master’s carriage rides by, then fuming against the Turks in Crimea or the Jews in the Pale or whoever after spending fifteen hard hours in the fields.  You know you’re a peasant when you worship the very people who are right now, this minute, conning you and taking your shit. Whatever the master does, you’re on board. When you get frisky, he sticks a big cross in the middle of your village, and you spend the rest of your life praying to it with big googly eyes. Or he puts out newspapers full of innuendo about this or that faraway group and you immediately salute and rush off to join the hate squad.  A good peasant is loyal, simpleminded, and full of misdirected anger.  And that’s what we’ve got now, a lot of misdirected anger searching around for a non-target to mis-punish . . . can’t be mad at AIG, can’t be mad at Citi or Goldman Sachs. The real villains have to be the anti-AIG protesters! After all, those people earned those bonuses! If ever there was a textbook case of peasant thinking, it’s struggling middle-class Americans burned up in defense of taxpayer-funded bonuses to millionaires. It’s really weird stuff.

One might think it would be a big news story for the second most-powerful member of the U.S. Senate to baldly state that the Congress is "owned" by the bankers who spawned the financial crisis and continue to dictate the government's actions.  But it won't be.  The leading members of the media work for the very corporations that benefit most from this process.  Establishment journalists are integral and well-rewarded members of the same system and thus cannot and will not see it as inherently corrupt (instead, as Newsweek's Evan Thomas said, their role, as "members of the ruling class," is to "prop up the existing order," "protect traditional institutions" and "safeguard the status quo").

That Congress is fully owned and controlled by a tiny sliver of narrow, oligarchical, deeply corrupted interests is simultaneously so obvious yet so demonized (only Unserious Shrill Fringe radicals, such as the IMF's former chief economist, use that sort of language) that even Durbin's explicit admission will be largely ignored.  Even that extreme of a confession (Durbin elaborated on it with Ed Schultz last night) hardly causes a ripple.

Here's Jane Hamsher, with Rachel Maddow, in February, assessing the motives of people like Evan Bayh and analyzing who owns and controls them (begins at the 3:00 minute mark):