Attack of the killer plague movies 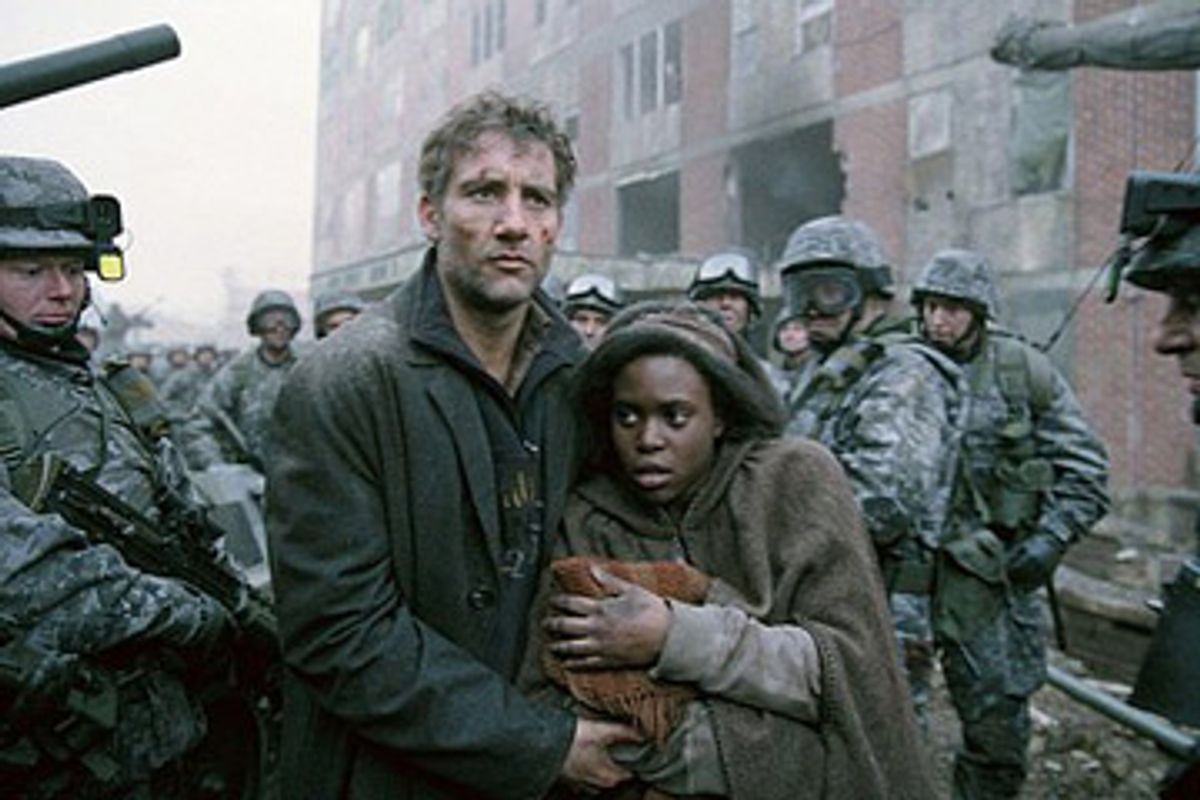 The recent swine-flu headlines have done a number on many of us, playing upon our greatest fears and apprehensions. For years, scientists have been warning us that it's only a matter of time before a vaccine-resistant, untreatable virus wills itself into existence and kills -- or transforms into zombies -- almost everyone on the planet except one or ten or a hundred hardy souls. Those survivors will be forced to retreat to remote, boarded-up shacks, where they'll have to ponder the biggest moral quandaries of mankind: For example, if your mom turns into a zombie, how do you kill her?

The scientists haven't, of course, put their warnings in exactly those terms. It's their job to outline the all-too-believable possibilities, although we also have a calm president who's more interested in keeping us rational than in stirring up our worst nightmares. But there is one place to turn to for images of desolate landscapes nearly wiped clean of freethinking creatures, of feverish, suffering people who suddenly turn into something not quite human, of rational people reduced to scrabbling for survival instead of just going to Target to pick up whatever they need: the movies, capable of feeding and intensifying our worst anxieties.

In the past five years alone, we've seen a rash of movies that show human beings forced into being their best selves, or their worst, as the result of some sort of deadly worldwide pandemic: "Children of Men"; "Blindness; "I Am Legend"; "Diary of the Dead" and "Land of the Dead," additions to director George Romero's much-beloved series of zombie movies; the spoof "Shaun of the Dead;" "Quarantine," a remake of the Spanish horror thriller "Rec"; and "28 Weeks Later," which builds upon the creepy, poetic paranoia of the earlier "28 Days Later."

And if we go back further, there are even more, among them the many zombie pictures spawned by the original Romero movies (which may not necessarily be "plague" pictures, strictly speaking, but which certainly mine the same us-against-them themes); "Outbreak" (which dates to the era of the Ebola scare) and the earlier adaptations of Richard Matheson's novel "I Am Legend," "The Omega Man" (1971) and "The Last Man on Earth" (1964).

What most if not all of these movies share is a gloomy atmosphere of isolation and paranoia. The culture so carefully built by man over the centuries has either completely disappeared or is vanishing rapidly. Stores are closed and, very likely, have been looted. Our traditional means of law and order have disappeared. There's no more garbage pickup. The military and the government are usually somehow involved -- ostensibly, they're trying to keep order, but mostly they're  just leading people to their doom. Often, as in the case of "Resident Evil," the virus has been purposely developed and unleashed by a big corporation -- and these days, we don't need to scrounge around to understand the resonance of that metaphor. In your standard plague movie, news stations can't stay on the air and ultimately fade out with a staticky crackle; newspapers can't publish (though, it turns out, we probably don't need a plague for either of those things to happen).

These movies do more than just lay out chilly what-if scenarios. Some of them are steeped in biblical morality: How do we react when we see fellow human beings in pain? When we see someone in danger -- a feverish individual, say, who may or may not be a zombie -- do we stop to help if doing so threatens our own safety, or do we opt for self-preservation? In most plague movies, there's deep mistrust of "the other," the outsider who may be infected (and it's often an outsider who started it all). Those kinds of stark divisions raise even bigger questions, sometimes amounting to a kind of civics lesson: What is it that keeps a society together, even if it's just a society of a dozen or so healthy (that is to say, uninfected) people?

And maybe that's why a real-life virus scare and a wholly fictional movie elicit the same response in us: Both make us think about coming face-to-face with our own sense of aloneness. In "Children of Men," based on the P.D. James novel of the same name, human beings have mysteriously lost their ability to reproduce. The picture is set in 2027 London, a grim and wholly unwelcoming place. The locals are encouraged to turn illegal immigrants in to the authorities; they're also encouraged to commit suicide -- with no babies being born, there's no hope for the future, so why not just call the whole thing off? Similarly, in "I Am Legend," set in 2012 New York, Will Smith appears to be the last man who hasn't been infected with a virus that turns humans into vampires. His wife and child are gone. His only friend is his German shepherd, Sam, and the two roam a city that has lost the human touch and is already returning to wilderness: Large plants have started to sprout between the cracks in the sidewalks; deer bound through midtown, past stores filled with things that no one needs -- or, rather, there is no longer anyone to need those things.

Generally, when babies are being born and vampires aren't roaming the night streets, cities are vibrant, crowded, wholly alive places. Being packed in tight with so many people can either be alienating or comforting, depending on your temperament (or on your mood on a given day). Cities are also places where germs and illnesses can spread fast, and so while the good old-fashioned small-town zombie infestation will always have its charms in the movies, the big-city viral invasion may be the one that really grips our imagination. Nothing is as lonely as an empty, dying metropolis. But perhaps one of the functions served by plague movies is that when we're faced with the possibility that nothing we've built really matters, we start to see more value in the things around us. The desolate Oxford Circus and Piccadilly Circus seen in "28 Days Later" are chilling because they seem so unthinkable; in "I Am Legend," the sight of a deserted Madison Avenue, overgrown with weeds, is as unnatural as a forest made of plastic trees. In these movies, humans are being punished for pushing nature out, and she'll have her revenge in viral form.

Big cities are also places where, symbolically, the rich live in luxury high-rises and the poor are sealed away in housing projects. Romero's 2005 "Land of the Dead" is a plague movie that's deeply observant of those strict class boundaries: The uninfected hope to shut themselves away in a gated community, leaving the "undesirables" suffering outside. "Land of the Dead" is both a virus scarefest and a raw meditation on the division between the haves and the have-nots. It's no small irony that the first case in this current swine-flu wave occurred in Mexico, a country that, for plenty of Americans, represents "the other," an entity that needs to be shut out at all costs.

Plague movies are sometimes, in a strange way, as comforting as they are unsettling: Many of them end with at least a small ray of hope, an inkling of a promise that humankind will not only survive its ordeal but will come back having learned something about generosity and compassion. Maybe that's the kind of thing that happens only in the movies. Maybe it's also the kind of thing that distinguishes zombies from human beings.