We need to investigate the Bush years, even if it means tearing the country -- and ourselves -- apart. 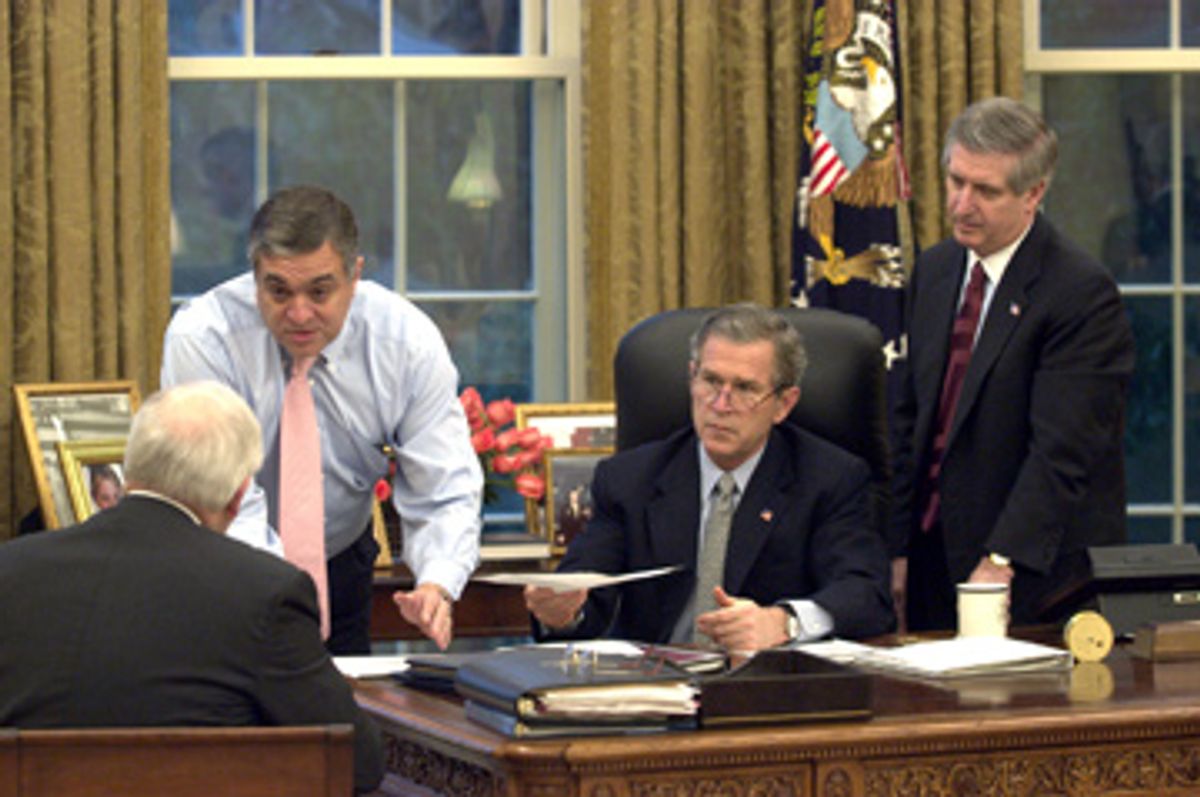 So it has finally come, our strange, anesthetized and vaguely dreaded day of national reckoning.

Almost eight years ago, a terrorist attack destroyed two towers in America's greatest city and killed almost 3,000 people. A year and a half later, still half-dazed by that trauma, America sleepwalked into the weirdest war in our history, a pointless, ruinous conflict fomented by ignorant ideologues, launched on false premises, justified by bogus evidence -- and supported by the majority of the American people, both political parties and most of the media. Under cover of that war, President George W. Bush and his top officials created a separate prison system not governed by U.S. laws, ordered the torture of detainees, sent others off to be tortured abroad, illegally wiretapped Americans, and in general ignored and flouted the U.S. Constitution and the rule of law.

In full knowledge of all of that, the American people narrowly reelected George W. Bush president. Two years ago they turned decisively against Bush's party and his war, throwing Republicans out of Congress en masse. And five months ago, staring into an economic abyss, they elected Barack Obama. Obama's opposition to the Iraq war from the beginning is almost certainly why he was able to defeat his formidable rival Hillary Clinton.

Now, ready or not, America faces the summing-up. The clamor for a truth commission to look into the lies, excesses and illegal acts committed during the Bush years has forced the country to decide not just whether it wants to investigate and possibly prosecute former officials, but whether it wants to look into the mirror -- whether it wants to investigate itself. For the painful truth is that for a long time, a majority of Americans implicitly or explicitly supported most of Bush's policies and actions. As Garrison Keillor noted in these pages, "I think the American electorate knew whom they reelected in 2004. Mr. Bush and Mr. Cheney did not run on a human-rights platform. They ran as rough men who would guard our sleep. So go talk to the voters of Ohio about war crimes."

Those opposed to reopening the book on the Bush years argue that doing so would tear the country apart. They're right -- but they forget that the country is already torn apart. The gulf between Democrats and Republicans has never been wider. The Republican Party, the home of those who still defend the Bush years, has become a reactionary and increasingly marginal movement that is in fealty to crude demagogues like Rush Limbaugh and whose hysterical denunciations of Obama sound more and more unhinged.

What this means is that those Americans who would be truly outraged by an investigation are already outraged. It could not make them any angrier or more bitter than they already are. And even if it did, how much difference would that make? The GOP base already regards Democrats as terrorist-coddling communists. Are they going to all join militias?

But what about the moderate Republicans, independents and hawkish Democrats who once supported Bush? Millions of Americans at one time supported the Iraq war, Guantánamo, illegal wiretapping and torture, because they believed that those things would keep America safe. Now, no longer afraid of another terror attack, and perhaps belatedly recognizing that Bush's illegal, excessive policies established dangerous precedents, they have changed their mind. How would these people react to an investigation of those Bush officials who planned and authorized the very deeds that they themselves supported?

Of course, there is no way to know for sure. But it seems likely that an investigation of the Bush years -- whether a truth commission headed by blue-chip figures like Lee Hamilton and Sandra Day O'Connor, as Nicholas Kristof and others have proposed, or a Justice Department probe -- would be precisely the painful but illuminating thing needed to wake Americans out of their fear-induced torpor, confront them with what was done in their name, and force them to take their responsibilities as citizens more seriously. Rather than cause a paralyzing cognitive dissonance, it would break through the cognitive dissonance that already exists.

That a swing voter changed allegiances and voted for Obama instead of McCain in 2008 does not necessarily indicate that he or she has come to terms with what the Bush administration did, or his or her own ambivalent and confused feelings about supporting it. And anything that shines a light on that unexamined tangle is good for both that individual and for civil society.

An investigation of the Bush years would not assign the ultimate blame to the citizenry: In a vast representative democracy like the U.S., the people cannot be held directly responsible for the illegal or immoral actions planned, authorized and carried out by government officials, even if they elected those officials. Those Americans who signed off on war and tacitly approved torture because they were afraid of terrorism must bear some responsibility for their hot-blooded reactions, but such reactions are to be expected. The reason we have laws and representatives and accountability is that they act as a check on mere impulse, on vigilante justice, the untrammeled thirst for vengeance. Because it would recognize this, the investigation would be psychologically tolerable to the American people. But at the same time, it would force citizens to examine their own conscience, their own attitudes, their own emotions and where those emotions led. And by calling for appropriate justice for those officials who, in cold blood, lied about war, created secret prisons, trashed the Constitution, and tortured, an investigation would make clear to every American that some lines can never be crossed.

The final argument against an investigation of Bush administration misdeeds is that the people, by voting for Obama, have already moved on. Obama won: That's all the self-insight we need. Unfortunately, there is no reason to believe this is true. The election of Obama did not signal any real national introspection, and his own reluctance to open up the Pandora's box of the past -- partly driven by the fact that many Democrats signed off on Bush's misdeeds -- has prevented any further national self-examination. Ever since 9/11 we have been living in a twilight country, one where it is not clear whether laws apply or not, a morally relativist place in which unembarrassed emotionalism has replaced adherence to ethical and legal principles. When one of the country's leading pundits, the New York Times' Thomas Friedman, can argue that the Bush administration torturers should suffer no legal consequences because "Al Qaeda truly was a unique enemy, and the post-9/11 era a deeply confounding war in a variety of ways," and that Americans "would have told the government (and still will) 'Do whatever it takes,'" he is basically saying that the inchoate fears and primal emotions of the people should override morality and law.

This widely shared attitude is like a dormant virus: It may appear to be harmless now, but it could come to life at any time.

This may be our great teachable moment, our one chance, Democrats and Republicans alike, to look clearly at our country and what it became under Bush. Already, people's attention is wandering, ennui is setting in, and a banal mood of easy acceptance is taking hold. If we don't act now, the chance may be lost. And then, the next time there is a terrorist attack, a cunning ideologue could once again lead America down the same primrose path.

Yes, you could call this victor's justice. But sometimes victor's justice is necessary -- and in this case, the victors will also be putting themselves in the dock, since so many of them were guilty, too. (The same thing is true of the establishment pundits who are now loudly insisting that it is time for us all to move on.) If we want to ensure that in the future duplicitous leaders do not trick us into wars, abrogate the Constitution, flout our laws and traditions, create secret prisons, and torture detainees, the only way is to look unflinchingly at what actually happened.

The talk about America being "torn apart" is overblown. But even if America has to go through a dark night of the soul to get where it needs to go, so be it. Nothing important in life is easy.