What the White House knew about Souter

Justice David Souter's upcoming departure wasn't entirely a secret in Washington. The administration had already started planning for a Supreme Court vacancy before the news broke. 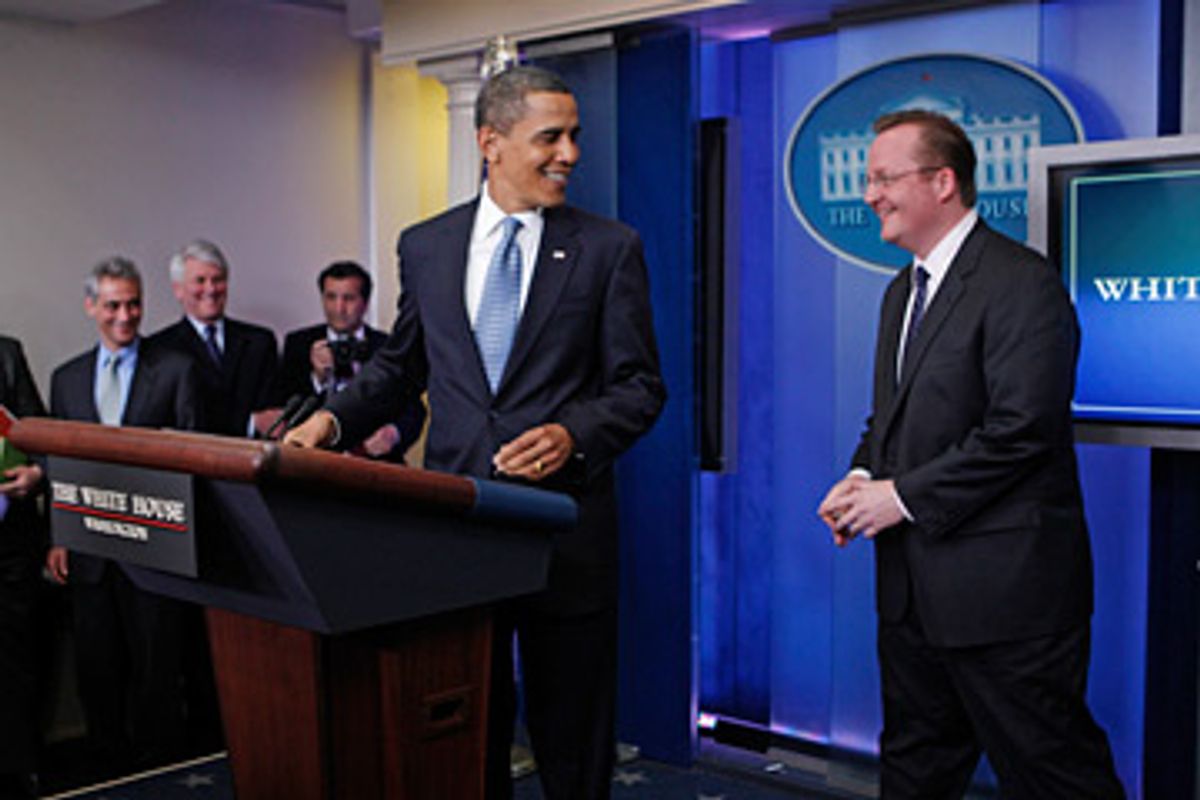 The White House press secretary, Robert Gibbs, was going through one of those silly charades on Friday afternoon that the capital sometimes seems to specialize in. The world had learned hours before that Justice David Souter would be stepping down from the Supreme Court, but apparently Souter hadn't gotten around to formally notifying President Barack Obama -- or his aides -- of his intentions.

So even as the administration began to put together a system to choose Souter's replacement and get that person confirmed by the Senate, Gibbs spent the first half of his midafternoon news briefing pretending there was nothing to talk about and refusing to give anything but the very broadest answers to questions about a Supreme Court nomination. "Is it weird that you haven't heard from Justice Souter?" a reporter asked Gibbs. "No," he answered, "it's weird that I'm talking about this not having heard from him."

Just a few minutes later, the games came to an end. "Hey," Obama said, strolling into the briefing room to the surprise of just about everyone in it, reporters and aides alike. "I'm sorry, but Gibbs is screwing this thing up," Obama said, teasing his press secretary. "There's a job to do, you got to do it yourself." Souter had just sent the White House a letter announcing his plans to step down and spoken to Obama on the phone; the president decided to break the news in person, interrupting Gibbs in the process.

"The process of selecting someone to replace Justice Souter is among my most serious responsibilities as president," Obama said. "So I will seek somebody with a sharp and independent mind and a record of excellence and integrity. I will seek someone who understands that justice isn't about some abstract legal theory or footnote in a casebook; it is also about how our laws affect the daily realities of people's lives." Pointedly, he said he wanted Souter's replacement to be sworn in "in time for him or her" to join the court when it starts its new session on the first Monday in October.

That was about all the White House would say officially about the news. But behind the scenes, aides had long ago started planning how to fill a vacant spot on the Supreme Court -- which, considering that Souter, at 69, is younger than five of his nine colleagues, was probably smart. Soon after the election, an administration official said, Obama's transition team set up a working group on judicial nominations, which picked out potential candidates for U.S. Court of Appeals and Supreme Court spots. Obama met with them several times in December, suggesting the names of people he might want to consider. (Officials wouldn't say whose names were brought up.) Senior White House aides met Thursday -- before the Souter news broke -- to talk about setting up a strategy for selecting and winning confirmation for a Supreme Court nominee.

The administration official, who requested anonymity to speak more freely about the judicial nomination process, said the timing of that meeting was a coincidence (if that's true, whoever planned it might want to buy a lottery ticket soon). But Souter had already given a few key players around Washington an idea that he might not stay on the court for long. A Senate source told Salon that about a month ago, Souter met with Sen. Patrick Leahy, D-Vt., who chairs the Judiciary Committee, telling Leahy he might retire. (ABC's George Stephanopoulos reported that Souter gave Senate Majority Leader Harry Reid a tip as well.) Leahy spoke to Obama Friday morning, before the White House had officially acknowledged that there would be a vacancy, and the two of them had also discussed judicial nominations during last year's campaign and after the election.

Obama has already nominated three judges for different circuit courts, acting more quickly, the administration official said, than the Clinton or the Bush administration did in sending judicial picks to the Senate. None of the three have been confirmed yet, though. Ironically, Arlen Specter's switch from Republican to Democrat -- which should make it easier for Obama's picks to make it through the Senate, by putting Democrats close to 60 votes -- may slow things down even more.

That's because Specter had been the top Republican on the Judiciary Committee, which will have the first crack at questioning, and voting on, whomever Obama chooses. But picking his replacement won't be so easy for the GOP. The next in line, Orrin Hatch of Utah, is barred by internal rules from becoming the ranking member because he chaired the committee recently. After him comes Chuck Grassley of Iowa, who can't take over the top GOP spot on Judiciary because he's already the highest-ranking Republican on the Finance Committee. Jon Kyl of Arizona can't take the job either, because he's the Senate's deputy GOP leader. Which means Alabama's Jeff Sessions, a conservative who sometimes looks and sounds like an angry Southern leprechaun, might take over the job. Hatch could step up if the GOP caucus gives him a waiver. A leadership aide said Republicans would probably vote on the committee spot early next week.

Obama promised Friday that he would reach out to whoever takes over, to get advice before seeking the Senate's consent to a nomination. Vice President Joe Biden, who ran confirmation hearings for several Supreme Court justices when he chaired the Senate Judiciary Committee, may play a major role in helping Obama and his aides figure out how to get the nominee through the panel (though a senior administration official told Salon that reports that Biden would run the process were overblown).

First, though, the administration has to come up with a nominee. It's only May 1, but time sometimes flies in Washington. That first Monday in October could be here before Obama and his aides know it.