You can spare a dime to save a kid

Instead of buying yachts and gilded trash cans, Wall Street's bailout kings could have spent some of their excess cash alleviating poverty. But what about you and me? 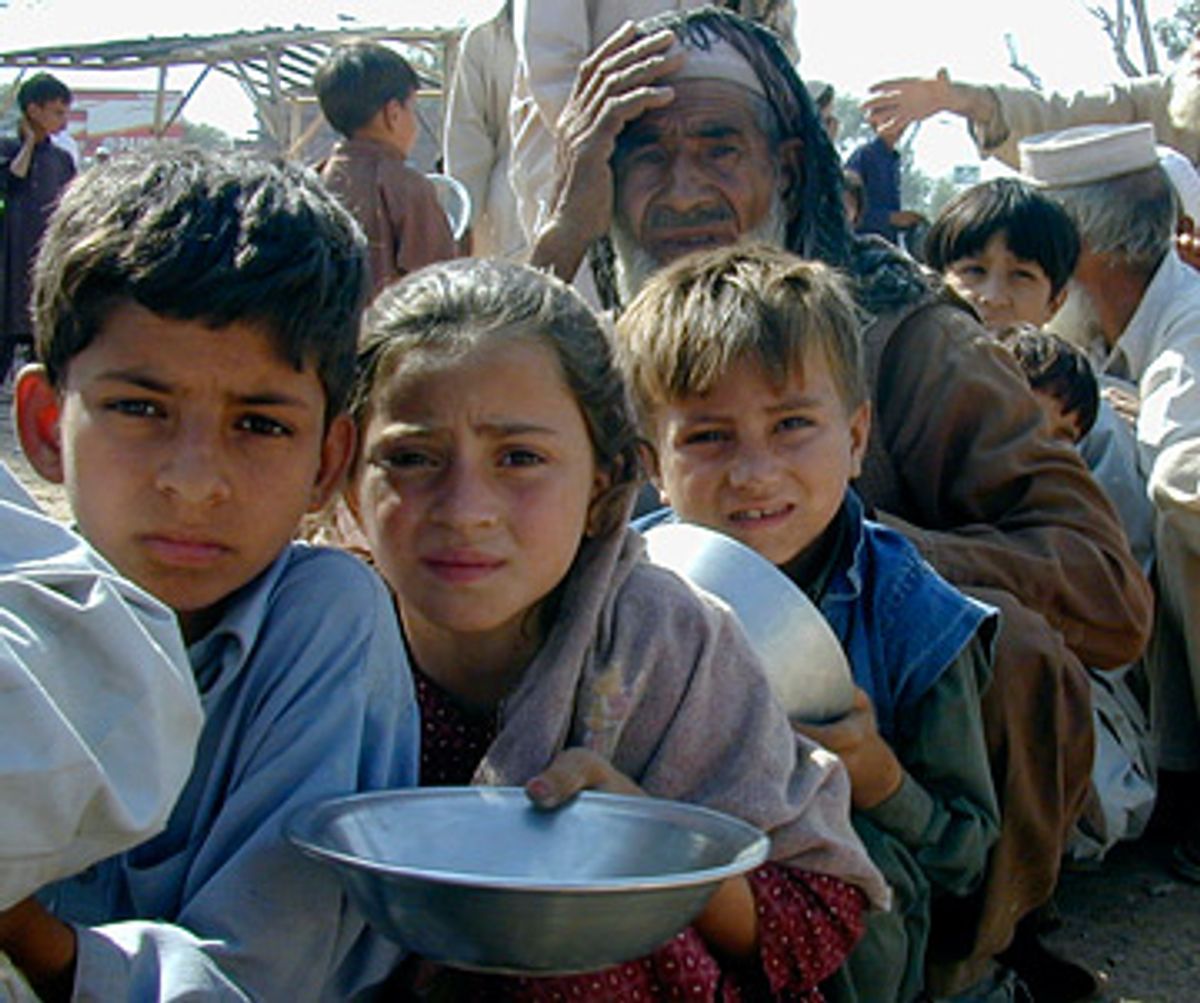 My rage regarding the enormous taxpayer-subsidized bonuses at AIG and Merrill Lynch had just about abated. I had read that Merrill Lynch paid $3.6 billion to its employees just before it went bust and got bought out by Bank of America, and that Peter Kraus, the CEO who left after three months on the job with a $25 million bonus, turned around and spent $37 million on a Park Avenue apartment. I knew that AIG handed out $165 million in bonuses; 73 employees got more than $1 million apiece, and the largest bonus was $6.4 million.

But then I read that one of the last decisions of Bear Stearns’ former CEO James Cayne, who resigned in January, was to authorize payment of about $2 million to a young woman who was about to file a sexual harassment suit against former Bear Stearns chieftain Alan "Ace" Greenberg. Seriously, let Greenberg pay for his own sins.

But then I put that in context, too. While we were all freaking out about the excesses of the bankers and traders, and awed by their absolute obliviousness about getting and spending our money as most Americans watched our pension funds lose half their value, 1.4 billion people around the globe struggled to live on $1.25 a day. It's hard not to stay mad at John Thain and his $1,405 trash can when I think about that $1.25, but I also had to stop and think about my own relative wealth and that $1.25. It's about what I spend for a bottle of water. Imagine trying to get through a day on that amount of money.

Peter Singer, the utilitarian philosopher with a penchant for annoying people — he has, in the past, asserted that animals have rights and that euthanasia should be an option for severely disabled newborns -- has just published a most timely new book. "The Life You Can Save" asks those of us with more than enough how we can justify not giving away the excess to save the lives of desperately poor people. This is not a newly humanitarian Singer suddenly eschewing rationality. All Singer’s work has at heart the same concern — the alleviation of suffering. His relentless rationality just happens to lead him to philosophical near absolutes about what it means to live an ethical life. He can’t help himself.

Singer started asking what we needed to do about global poverty 1o years ago in a Times Sunday Magazine piece. The answer was unpalatable. To live a pretty good life, we needed about $30,000 -- and we could and should give the rest away. Singer scared a lot of folks with disposable income. Who did this atheist think he was -- Jesus Christ? He was derided for not taking his own medicine, since it was revealed that he spent a lot of money taking care of his mother, who had Alzheimer’s.

Singer's current request is far more modest. He still suggests a specific percentage of giving based on income, but his major plea echoes that of Oliver Twist. Bowl extended, he simply asks that we do more to eradicate poverty and more to save children's lives. More than we are doing, more than we think we can do. More, please, is all he asks.

I hate poverty. When I was a kid we were mostly working-class OK, but we lived paycheck to paycheck. There were times when seconds at dinner did not exist and when we put paper in our shoes to keep out the rain. It kills me now when I traipse through Safeway with fresh O.J. and Häagen-Dazs and behind me or in front of me there’s a father in his work clothes trailed by very quiet kids. Dad is counting his change to be sure he can pay for milk and bread. It reminds me of the pain of where I’d been and how getting out of the paycheck-to-paycheck life turned me into a big-time consumer. Security meant having more than enough. I had only my salary, but it was a lot more than enough. I hate poverty; I also love excess.

When I read Singer's Times piece 10 years ago, I knew I couldn’t meet his high standard, but I also knew he was right. I decided that I’d give 5 percent of my income to charities related to poverty alleviation and top it off by contributing an amount equal to every major luxury I indulged as well. It cut down my consumption, but it also increased my giving. And I’m weak. I fudge on what is a luxury.

I know a lot of really rich people are charitable. The same Cayne who shelled out $2 million to avoid a lawsuit established a mandatory contribution policy for senior managing directors at Bear Stearns; they had to give 4 percent of their salary and bonus to nonprofits. But have the traders and bankers and the celebrity enviros and poverty mavens and the rest of us linked our charitable giving to our consumption and excess? Do we take seriously the fact that poverty really does kill? Ten million children under 5 years of age die unnecessarily every year. Can you know that and not give up those luxuries that probably don’t make much real difference in your satisfaction?

Singer says you can’t. He insists that “the truly ethical life is really a demanding one.” Can you be an environmentalist and buy a 414-foot yacht for $200 million like Microsoft co-founder Paul Allen? How many lives could $200 million save? One of the charities Singer talks about is the DC-based Population Services International, which has a program that saves lives by treating oral rehydration. For every $250 they spend, a life is saved. That’s 800,000 lives. And since Allen owns two other yachts, he might have been able to manage without this one. John Thain’s wastebasket alone could have prevented two children from getting malaria and dying. Another group, Partners in Health, provides basic health services in Haiti, Peru, Rwanda, Lesotho and Russia. Providing basic health service in very poor countries is relatively expensive. It cost $3,500 to save a child’s life. Paul Kraus could have saved 10,571 kids lives if he had just stayed wherever he was living and not bought that Park Avenue pad. These charities and Oxfam, which is Singer’s personal charity of choice, all have top-notch cost-effectiveness ratings.

So Singer says a very polite no to the Thains of the world. Even if you are giving away a good bit of money, if you are living an excessive lifestyle while children are dying for no good reason, you need to give more. For those of us with modest means, 95 percent of Americans, Singer says giving away 5 percent is a good starting point. He himself has gotten up to only 25 percent. He lives modestly. I watched him on YouTube demonstrating how one could eat simply. He was preparing a gloppy mess -- a red lentil dal -- in a very modest kitchen. There was nary a granite countertop in sight. I was reading Gael Greene’s "Insatiable" at the time, with chapter after chapter devoted to foie gras and Chateau Margaux.

Singer makes a compelling case that we have an unprecedented opportunity to use our personal resources to complement those of government and actually end world poverty. Yes, we can, he says. The ethical life is demanding -- but is there any other choice?