The pop star refused to talk about her body for a June cover story. But that didn't stop the magazine from obsessing over it. 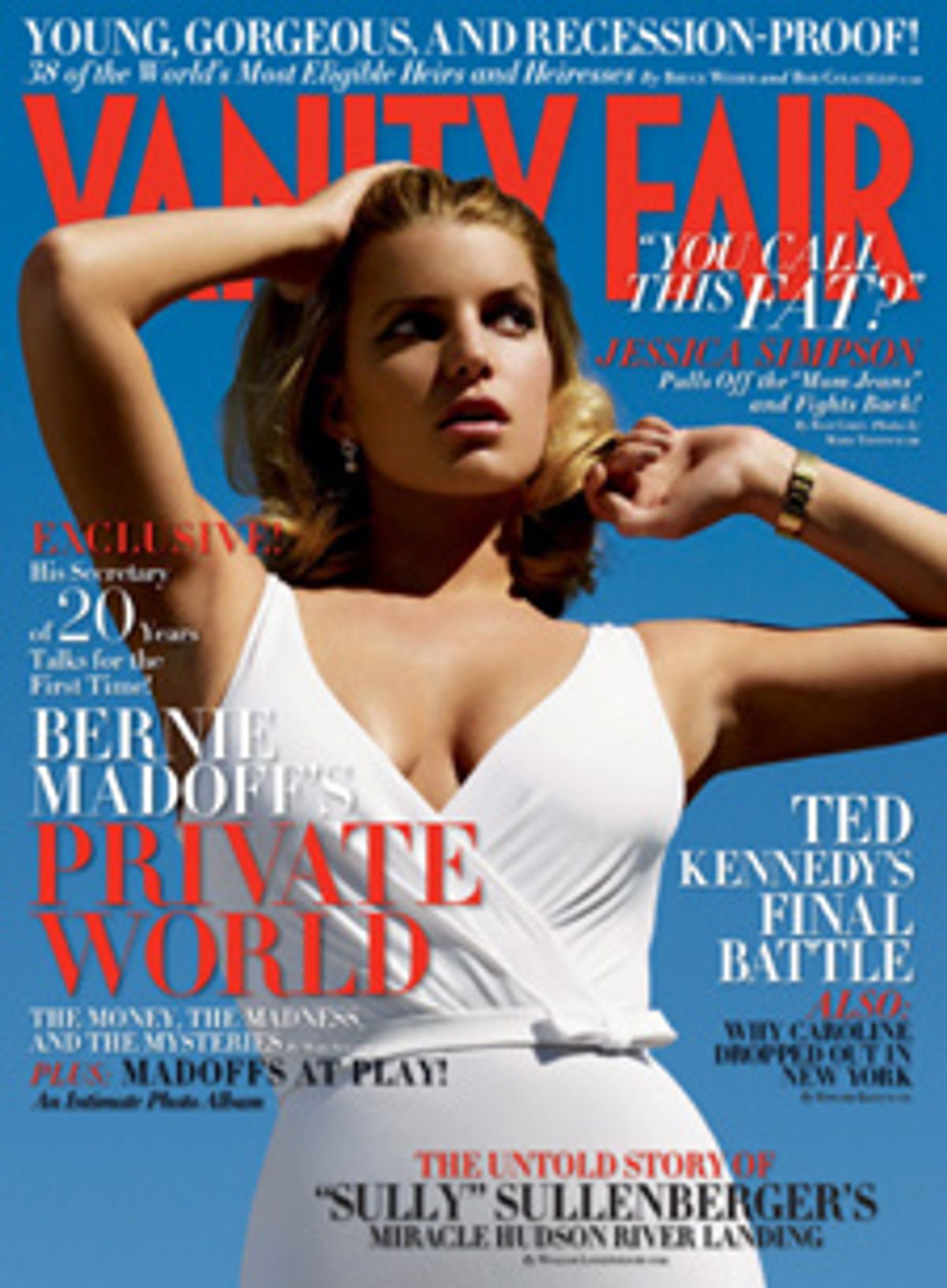 A notably svelte Jessica Simpson, wearing an updated Marilyn Monroe dress and a mysterious (or vacant) expression, graces the cover of Vanity Fair's June issue. The caption? "'You Call This Fat?' Jessica Simpson Pulls Off the 'Mom Jeans' and Fights Back." Breathless, overblown cover lines are, of course, standard in the glossy-magazine universe. But Vanity Fair's pseudo-quote raises this kind of misrepresentation to a whole new level. As Entertainment Weekly's Alynda Wheat notes, "Simpson never says word one about her weight in the accompanying article. Not one."

This is not to say that Simpson's weight doesn't come up in the piece. It is, in fact, all over "The Jessica Question"-- in the form of writer Rich Cohen's own obsession with the pop star's waistline. The thesis of the story seems to be that Simpson's career is on the skids -- and, of course, her weight gain serves as a prime piece of evidence for this theory. Here's how Cohen, a contributing editor for the magazine, describes his meeting with the singer:

Jessica seemed nervous. Her hands trembled. She ordered a glass of Pinot Grigio. It seemed to calm her. She didn’t want to talk about her weight, so, of course, that’s all I could think of -- it gilded each question in my mind: What are you working on now [that you’re fat]? Do you see yourself as part of a class, with Christina and Britney [or are you too fat]? Do you feel that your relationship with Tony Romo has affected his performance as a quarterback [because you are fat]?

What's amazing about this -- besides the depressing realization that an accomplished journalist isn't interested in anything except his subject's weight -- is that Simpson is now as thin as ever. "There was really no reason to ask about her weight," Cohen admits. "Her extra pounds had gone back to wherever they came from, existing only in a few dated pictures on the Internet. Jessica was skinny again, in dark pants, velvety coat, and high heels." Well, thank heavens for that. I know that I, for one, will be sleeping more soundly now that Jessica Simpson can rock a size 4 again.

You'd think Cohen would leave it at that, but he doesn't. "I didn’t want to ask about her weight directly," he writes, a few paragraphs later, "so I hinted at it, asking instead about body image in general, physical changes, perception -- from my questions, you might have thought I was interviewing the Wolf Man."

In the pages that follow, Cohen eases up a bit on the weight stuff, talking about Simpson's relationship with Dallas Cowboys quarterback Tony Romo and repeating years-old anecdotes about Simpson's strange, possibly pervy, careerist father. But he never answers "The Jessica Question." In fact, by the end of the piece, I wasn't even sure what the question was supposed to be. Simpson comes off as no more or less than a pop star between albums, with not much new to discuss. As its cover line suggests, the entire article seems to hinge on an unnecessary conversation that never happened. Which brings us to my Jessica question: "Why publish a cover story that doesn't have anything to say?"