Tribeca: Best of the fest

An Irish horror-romance-farce, an Iranian take on "L'Avventura," a gritty lesbian thriller, a black-and-white jazz musical -- and go-kart racing. 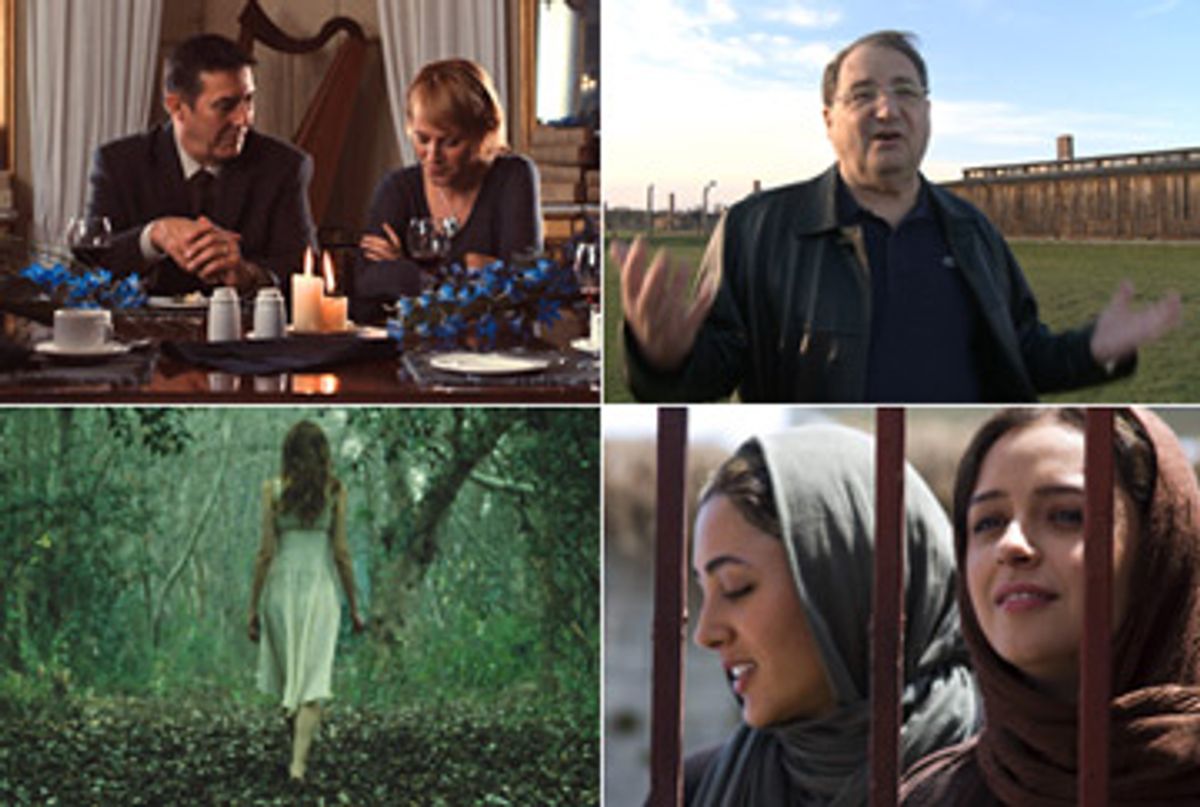 Clockwise from top left: Scenes from "The Eclipse," "Defamation," "About Elly" and "The Fish Child."

I've spent enough time bewailing the miscellaneous history of the Tribeca Film Festival, but now that this year's edition is over, let me turn around and heap it with laurels. In shrinking by 50 percent over the last three years and backing away from big-ticket Hollywood premieres, Tribeca may have found an appropriate size and an appropriate niche. At least for now, that niche is as a high-visibility New York showcase for fairly small films, mostly meaning global art-house movies and American documentaries.

Sure, I'm still worried that with former artistic director Peter Scarlet out the door, Tribeca will veer back toward its addiction to mid-budget, sub-Sundance indie dramas. (I sat through one of those this year, the mysteriously awful "Accidents Happen," and skipped all the others.) Audiences liked Raymond DeFelitta's Italian-American family comedy "City Island," which is a paradigmatic Tribeca film if ever there was one, but I continue to maintain that this festival's true strength lies in its breadth and unpredictability. Given the contracting universe of the film industry -- and the contracting universe, period -- this was a strong Tribeca, if pretty far from an earth-shaking one. Here are the eight films from Tribeca '09 -- five narrative features, three documentaries -- that left the strongest impression on me, and that you should get to see in the months ahead. OK, let's make that seven, plus a ringer. I haven't actually seen Marshall Curry's "Racing Dreams." I have, however, been surrounded by people waving alcoholic drinks and assuring me how thoroughly entertaining it was.

"About Elly" Iranian metaphorical realism meets Antonioni in this breakthrough film from Asghar Farhadi, which won Tribeca's juried narrative prize. A group of Tehran middle-class  friends head to the seashore, hoping to arrange a romance between two displaced members. Already a veiled commentary (ha, ha) on the occluded nature of Iranian social life, "About Elly" then takes a turn into allegory, when one woman goes mysteriously missing. Sure, Farhadi is channeling "L'Avventura," but this is accomplished and memorable cinema. That said, prizes from Tribeca and Cannes translate into zero at the box office, and Farhadi is still looking for a United States distribution deal.

"Defamation" Israeli director Yoav Shamir went in search of anti-Semitism, somewhat in the vein of a slimmer, Hebrew-speaking Michael Moore, and came back with this alternately sweet-tempered and outrageous doc. Anti-Defamation League head Abe Foxman looks like a self-inflated huckster, anti-Zionist academic Norman Finkelstein looks bitter and unhinged (even as he makes valid points) and the Auschwitz field trips taken by golden, glowing Israeli teenagers look positively obscene. First Run Features will distribute in the U.S., and this will spark long arguments deep into the night among Jewish and non-Jewish viewers alike.

"The Eclipse" Odd but haunting horror-romance-farce outing from Irish playwright-turned-director Conor McPherson developed tremendous audience buzz, and was snapped up by Magnolia Pictures for U.S. distribution before festival's end. Veteran Irish and British TV actor Ciarán Hinds is an aspiring writer and struggling widowed dad in the charming seaside town of Cobh, who winds up caught between a loathsome Irish-American crafter of bestsellers (Aidan Quinn), a winsome Scandinavian who writes about ghosts (Iben Hjejle) and a real or imagined ghost who isn't friendly in the least. Mostly not a horror film, but delivers superlative shocks at unexpected intervals.

"The Fish Child" Gloomy, gritty, atmospheric thriller from the supremely talented young Argentine director Lucía Puenzo (daughter of another fine filmmaker, Luis Puenzo), tracking the unraveling lesbian love affair between a needy rich girl (Inés Efron, the intersexual hero/ine of Puenzo's underrated "XXY") and her family's gorgeous Paraguayan maid. For my money, Puenzo's potent blend of melodrama, sensation and ground-level, class-conscious realism isn't quite like any other contemporary director. No U.S. distributor at this writing.

"Rachel" I've already covered this documentary from contentious and brilliant Moroccan-Israeli-French director Simone Bitton, which tries to shed some light on the March 2003 death of Rachel Corrie, the American peace activist crushed by an Israeli military bulldozer in the Gaza Strip. (Or, if you prefer the official version, buried accidentally beneath a mound of earth.)

"Racing Dreams" As I've confessed, I haven't seen Marshall Curry's doc about go-kart racing, middle America's kid-size gateway to NASCAR stardom. Tribeca audiences ate it up, and the documentary jury handed Curry its grand prize. Mainstream distribution is a sure thing, but I have no details at this writing.

"Seven Minutes in Heaven" Gorgeously made, evocative and sexy, Israeli director Omri Givon's explosive drama about a survivor of a Jerusalem terrorist bombing as she rebuilds her life has international hit written all over it. While the subject matter is potentially controversial, the Israeli-Palestinian conflict is really just colorful backdrop as sexy, wounded Galia (Raymonde Amsalem) struggles to recover from the episode that killed her boyfriend, helped along by the hunky Boaz (Eldad Fribas), who may know more about what happened to Galia than he lets on. I have mixed feelings about the ending, which ventures into gimmicky, M. Night Shyamalan territory, but audiences are going to love it.