The Republicans are against it! Whatever it is

Led by Jefferson Beauregard Sessions III, the GOP is already preparing to oppose President Obama's pick for the Supreme Court as a radical leftist -- whoever he or she is. 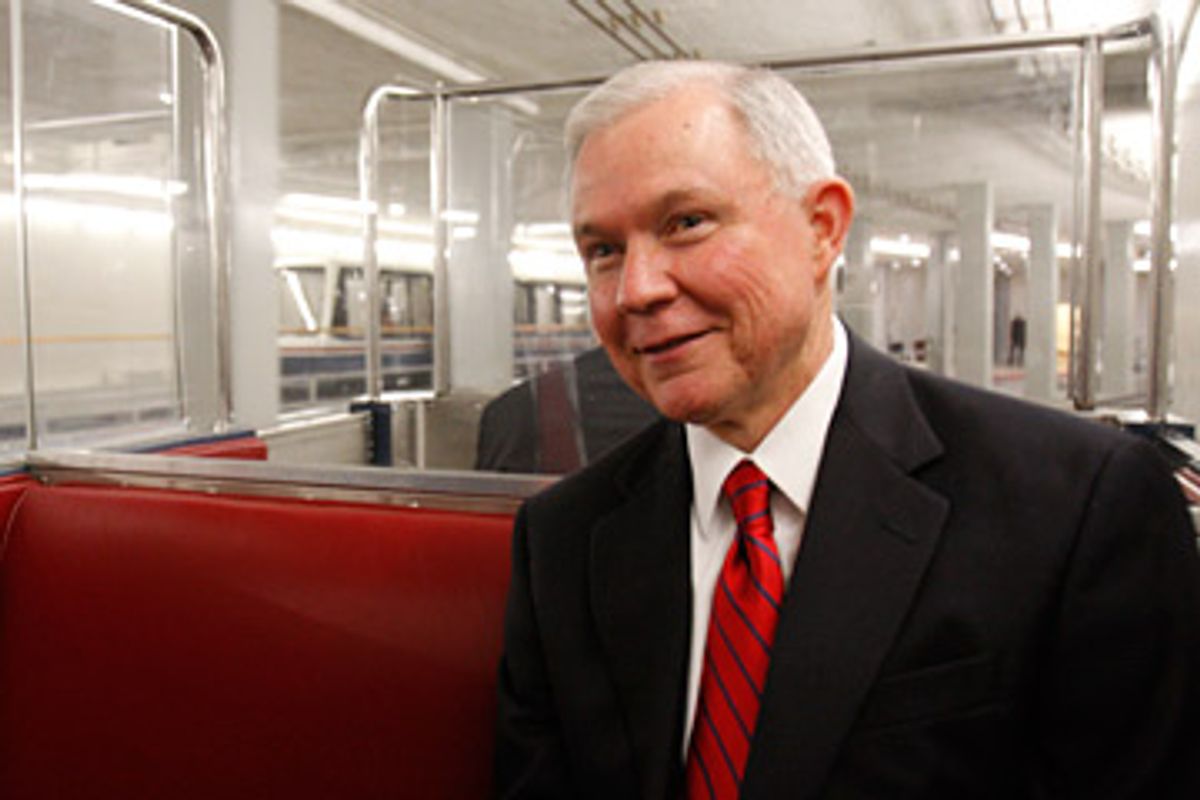 The person President Obama wants to put on the Supreme Court is "far to the left," says one Senate Republican. A "hard-left judicial activist," a conservative group says. The nominee better remember that judges have to "subordinate themselves to the law," another GOP senator warned Tuesday.

Imagine what they'll say when they actually know who the nominee is.

Just days after Justice David Souter announced plans to retire at the end of the current Supreme Court term, the right wing is already gearing up for a battle, no matter whose name Obama sends up to the Senate for confirmation. While the Senate GOP seems to lose power every day, don't tell that to conservatives. To listen to some of the rhetoric coming out of the right, you'd think George W. Bush was still president.

"Nominees can be Democrats," Sen. Jeff Sessions, the Alabama Republican who was elected Tuesday afternoon to become the GOP's leader on the Judiciary Committee, said magnanimously not long afterward. "They can be liberals. As long as they have a deep commitment to the law and recognize that when they put on the robe, that they go beyond politics and they're required to subordinate themselves to the law as written."

Sessions, serving in his third term, came to the Senate after a long career as a law-and-order Alabama politician. Jefferson Beauregard Sessions III has not always expressed the most enlightened views on race over the years, which helped torpedo his own nomination to the federal bench 23 years ago by then-President Ronald Reagan. Even Alabama Sen. Howell Heflin, a Democrat, voted against Sessions after a bruising confirmation battle. (So did Arlen Specter, then a Republican, whose party switch last week gave Sessions the chance to move up on the committee Tuesday.) On issue after issue that's come up before the Judiciary Committee over the last few years -- judges, immigration, you name it -- Sessions has been a right-wing warrior. When Bush was president, Sessions insisted on an up-or-down vote for Justice Samuel Alito, one hard line he may soon disavow.

"He's one of our most articulate spokesmen for the Constitution, the rule of law, and he's not afraid to speak out," Sen. Jim DeMint, a South Carolina Republican who often teams up with Sessions to push a conservative hard line, told Salon. "I think he is going to be really good for us as a party in that area, as we get these judges nominated who we do not expect to represent a constitutional perspective ... Jeff will definitely be good raising the red flag when we get someone who's clearly an activist."

That kind of talk has been all over conservative circles since Friday, when Souter's departure became official. The right is launching preemptive strikes against any judge Obama might want to pick, hoping to paint whoever the eventual nominee is as too far left even before a name surfaces. Someone posted a YouTube clip that seemed aimed at discrediting one potential nominee, Sonia Sotomayor; by Tuesday morning, it was flying around Washington by e-mail. "While President Obama has said he intends to nominate a moderate or a pragmatist, not a liberal activist, it is advisable to take that statement with a grain of salt," one conservative group, the Judicial Confirmation Network, wrote reporters in a memo Tuesday. "Remember, he thinks that the current Supreme Court -- the majority of which is a liberal judicial activist Court -- is 'right-wing' or 'conservative.' If that is his frame of reference ('liberal judicial activist' equals 'right-wing'), then his definition of 'moderate' may be equally skewed." Of course, you could say the same about any organization that thinks the current court -- headed by Chief Justice John Roberts, a Bush appointee -- is particularly liberal.

Enough Republicans are pushing a similar message that it's clearly coordinated. While not confirming that the response was a group effort, a GOP consultant told Salon that message control was a smart choice. "The news cycle and the public debate won't just sit and idle until there is a nominee announced, so it doesn't make any sense to just wait to put a frame around our arguments."

So Tuesday brought unified talking points from most Republicans. "The president should be given every deference, as far as I'm concerned, but if they put up a nominee who doesn't understand ... judges are not supposed to run the country, they're supposed to interpret the laws made by those who are elected officials -- who have to stand for reelection -- then, yeah there's going to be a big fight over it," said Sen. Orrin Hatch of Utah, who would have taken over the top GOP spot on Judiciary if not for term limits that ruled him out. "There's no doubt in my eyes that [Obama's] going to nominate somebody who is far to the left of where I am. And I mean -- he was elected as probably the most liberal president in history, and there are all kinds of expectations by him on the far left."

The White House wouldn't say much about the Supreme Court Tuesday, though aides said Obama wouldn't choose a nominee by the end of the week, knocking down a rumor Hatch had started Monday. Democratic aides on Capitol Hill said the administration hasn't yet sent up any strategic guidance for how to shepherd the nomination through the Judiciary Committee and then the full Senate. While Republicans draw lines in the sand that they may not have the votes to enforce, Democrats and liberal groups seem to be waiting on Obama.

"The criteria he set out are the criteria that we totally agree with, and the criteria that he has a mandate for," said Marge Baker, executive vice president of People for the American Way, a progressive organization. Someone who "gets how the law and the Constitution affect average Americans -- that's what we want. The president is doing and saying what we think."

What some progressives are hoping, in fact, is that the right wing stirs itself up into such a frenzy opposing the nominee in theory that by the time an actual name surfaces, conservatives  have marginalized themselves. "They seem to be overreacting," Baker said. A close White House ally, Sen. Claire McCaskill of Missouri, said the fuss was all likely to be moot. "I know that judicial nominees can be controversial, but let me tell you why I don't think that this one will become controversial," she said Tuesday. "This president is not interested in appointing an ideologue. This is a pragmatic president who understands the role of a Supreme Court justice, and I'm confident his nominee will not be someone who lends themselves to this kind of a really high-pitched battle."

As for Sessions, Democrats seem content not to antagonize him before they have to. Democrat-come-lately Specter told reporters he had come to regret his vote, back when he was a Republican, against the Alabaman's nomination. "I have since found that Senator Sessions is an egalitarian," he said. Progressive groups like PFAW said they'd wait to see how he handled the actual nominee before criticizing his approach.

Before assuming things will go smoothly, though, the administration might do well to remember McCaskill's take. "I have a lot of respect for Jeff Sessions," she said Tuesday. "But he would be insulted if somebody called him a moderate." From the way the GOP is acting, a fight may be inevitable.