Why I'm starting to feel for Miss California

Scorned for speaking her mind, punished for lying about her past, Carrie Prejean is a shining example of our mixed-up ideas about American womanhood. 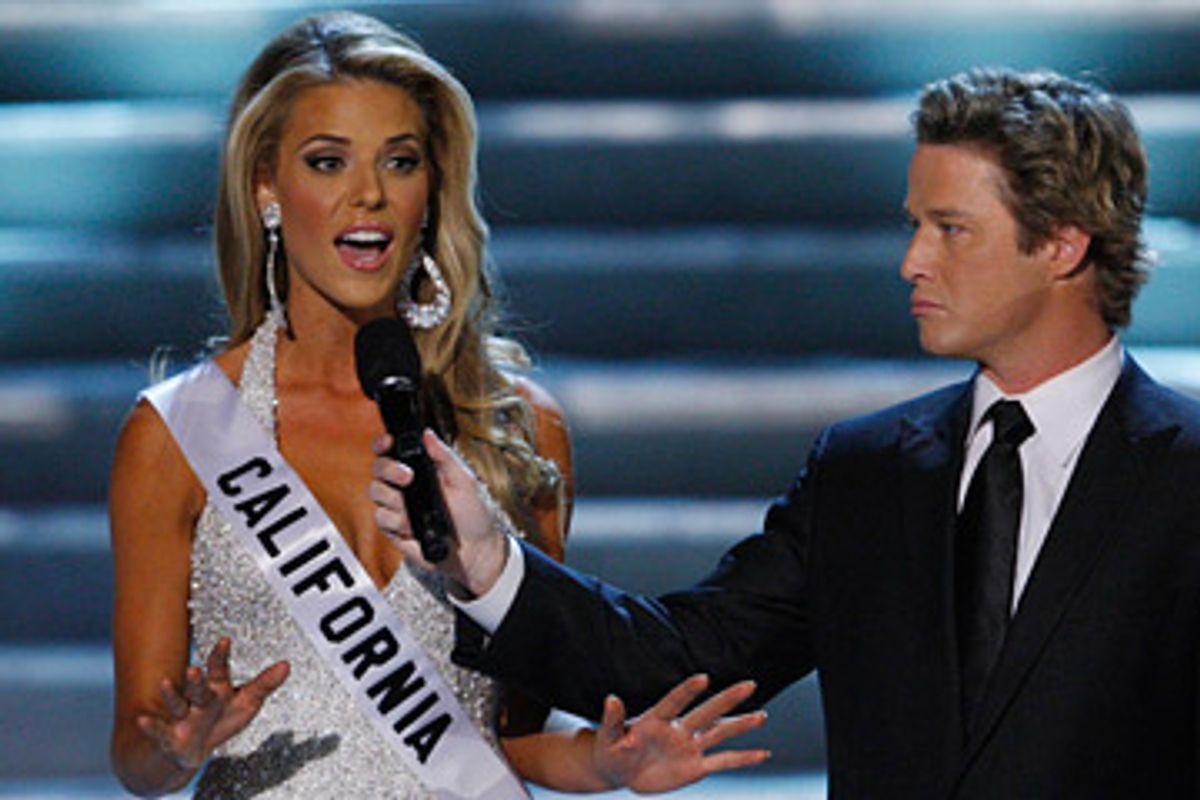 Miss California Carrie Prejean, left, responds to a question about gay marriage with Billy Bush during the Miss USA Pageant.

She's got fake boobs. She's posed for pictures in just her underpants and, it appears, lied about it. Her remarks on "opposite marriage" suggest she may not be doing much to dispel the myth of the dim bulb blonde. Carrie Prejean, I'm starting to feel for you.

You may remember that Prejean, better known as Miss California, livened up the moribund world of beauty competition last month during the Miss USA pageant when she told pageant judge Perez Hilton that, "no offense," she believed matrimony should be between a man and a woman. After weeks of scorn and celebrity, Prejean has now helpfully provided her public with a racy past.

Earlier this week, a photo emerged on theDirty.com showing the 21-year-old evangelical Christian/smoking hottie, clad only in a pair of pink panties, glancing seductively over her shoulder at the camera. In the resulting hoo-hah, Prejean trotted out the classic young-and-innocent chestnut: "This was when I was 17 years old. I was a minor," she said in an e-mail to Californian pageant officials. "It was when I was first getting into the modeling world, being naive, and young. I shouldnt (sic) have taken the photo of me in my underwear. There are no other photos of me. This was the only one I took."

Not since "I didn't inhale" has a scenario seemed less plausible. Sure enough, TMZ reports today that at least three other photos will be emerging soon, sending the pageant into public relations frenzy. The co-director for Miss California USA, Keith Lewis, promptly announced, "I'm absolutely stunned." Officials are meeting with Miss California's runner-up Tami Farrell later this week, implying that a passing of the scepter may be imminent. This, by the way, is the same pageant that paid for Prejean's breast implants, reasoning, according to Lewis, that "we want to put her in the best possible confidence in order to present herself in the best possible light on a national stage."

Prejean, who stated in her pageant contract she had never appeared nude or semi-nude, has meanwhile been formally offered a million dollars by adult film studio Vivid to "star" in one of their films. TheDirty.com is referring to her today as a "homophobic debutant," while the commenters there and elsewhere have been considerably less charitable in their assessments of the Golden State "skank." Which is why, somewhere around the umpteenth reference to her "hypocrisy," I started to feel pretty dirty myself. I may not understand or agree with any of Prejean's life choices, but I can't feel good about hating her for hers either.

At a crucial moment in her career as a beauty queen, she filled out a form and was dishonest about her past. She hid from the truth, from who she had been and what she had done. She is now bearing the punishing consequences of the choice, in the form of public scorn and likely stripping of her title. At another moment, onstage, she was honest. She expressed her view about marriage and got called out as a homophobe and a bitch for it. Whatever anyone may think of her opinion, it seems pretty ambushy to ask for it and then excoriate her for giving it.

Had she been truthful in her application, she might never have competed in the pageant at all. Had she lied in her answer to Hilton, she might have won it. Prejean wasn't even born yet when Vanessa Williams had to relinquish the Miss America title when nude photos of her emerged. Yet, a generation later, we still cling to the nearly impossible-to-uphold standards we set for our beauty monarchy -- sexy but not too sexy, pure but not prudish, outspoken but only if we agree with the opinion. She's a bundle of youthful contradictions, wrapped up in one breast-enhanced, bikini-clad, Miss USA bankrolled package. She may have lost the contest, but congratulations Carrie Prejean: You're truly the queen of no-win, dammed if you do, dammed if you don't American womanhood.