Resistance is futile! And you don't have to speak Klingon to enjoy J.J. Abrams' joyous and sexy update of the sci-fi classic. 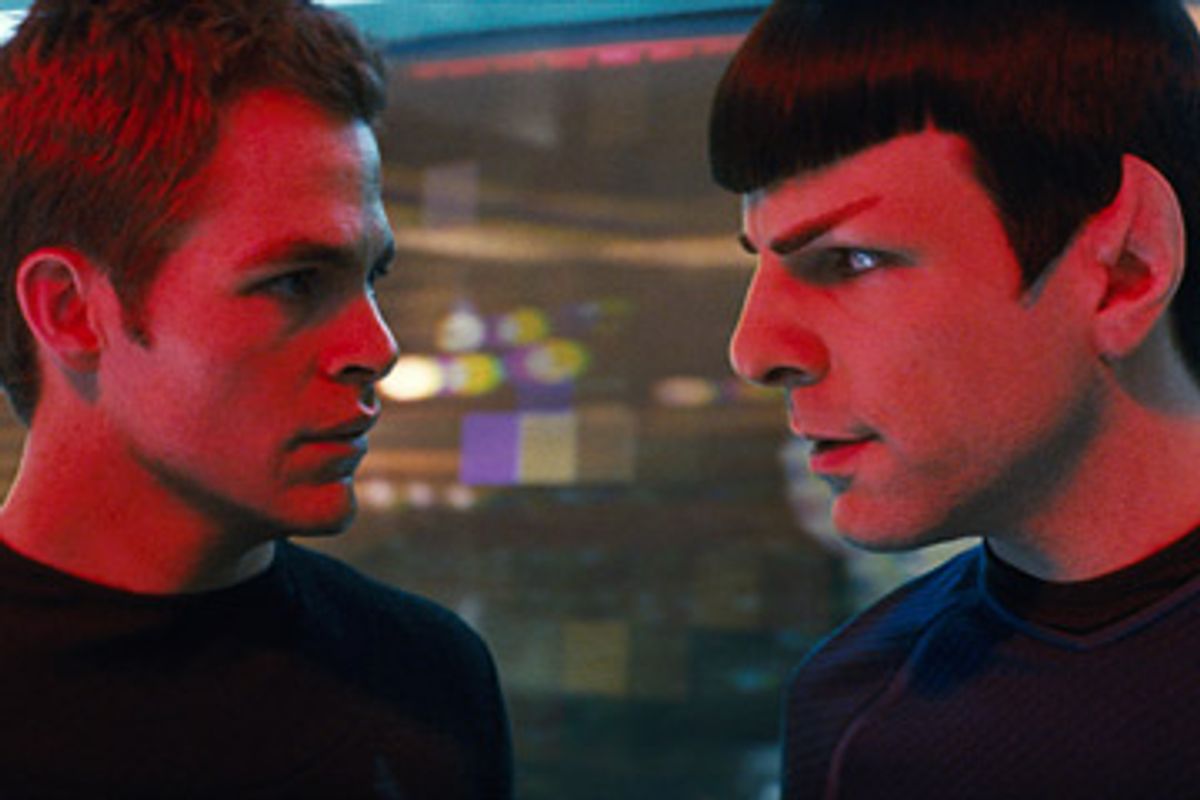 There's so much that could have gone wrong with J.J. Abrams' "Star Trek." In fact, there's very little reason for anything in it to have gone right. The task of revisiting a much-beloved television series -- which went on to spawn several other television shows and a movie franchise -- is the equivalent of beaming yourself onto a potentially hostile planet. It hasn't helped that in the months leading up to the release of "Star Trek," audience expectations have been either way too high or too low: One-half of the world's population has been dying to see the movie; the other half, desperate not to be lumped in with the first half, has been running as far away from "Star Trek" mania as possible. But I'm here to say that they can stop running: "Star Trek" is an affectionate, exuberant picture that seeks to bring even those who don't know Klingon from Portuguese into the embrace of a pop-culture phenomenon.

I enjoyed watching "Star Trek," rather noncommittally, when it ran in syndication in the 1970s. My colleague Andrew O'Hehir adored it, and he recently used the word "optimistic" to describe it, which is to me a perfect summation: For kids of the '60s and '70s, "Star Trek" offered a vision of the future that suggested we had something to look forward to, not just in terms of groovy space travel, but in the sense that citizens of the coming centuries would share the same civic values. Their mandate, as explained in the voice-over that introduced each episode, was "to explore strange new worlds," not to send occupying forces. "Star Trek" wasn't aggressive; it was merely assertive, in an open-minded way.

And somehow, with this new movie version of "Star Trek," Abrams and his writers, Roberto Orci and Alex Kurtzman, have captured that inclusive spirit to make a movie that is itself inclusive. "Star Trek" is a prequel: You could call it "Star Trek Origins," although unlike "X-Men Origins: Wolverine," it actually bothers to invent and support a believable back story for the characters originally created by Gene Roddenberry and played by the likes of William Shatner, DeForest Kelley, Nichelle Nichols and Leonard Nimoy (the last of whom has a small but potent role in this movie version). The movie opens, on a pre-Starship Enterprise vessel, before any of these characters have even been born. The ship is under attack by alien forces. A young woman who's suffering labor pains is being hustled briskly through the chaos, hearing words no mother-to-be ever wants to hear: "You'll give birth on the shuttle."

That baby will become James T. Kirk (Chris Pine). His father, the just-appointed captain of that doomed ship, died the day he was born. Elsewhere, on another planet, a very serious schoolboy dressed in drab, dignified robes is being taunted by his schoolmates. This youngster will grow up to be Spock, and he'll be played by Zachary Quinto (of "Heroes"), but for now he's just a kid suffering from the fact that his father (Ben Cross) is a Vulcan while his mother (Winona Ryder, who gives a nicely wrought performance in a small role) is human, in an embarrassment to end all embarrassments. This young Spock (played by Jacob Kogan) matter-of-factly greets the bullies who've gathered 'round, ready to beat the crap out of him: "I assume you've prepared more insults for today," he says, complimenting them on their banality.

Spock and Kirk grow up to be fellow classmates at the famed Starfleet Academy, and, in romantic-comedy fashion, they can't stand each other at first sight. The plot of "Star Trek" hinges on the actions of an ill-tempered Romulan, Nero (Eric Bana, looking, for a change, shockingly expressive), who's understandably disgruntled because his planet has either been destroyed or is about to be destroyed. His perception of its existence, or lack thereof, has been complicated by a time-bending plot device that makes sense in the movie's universe, if not in this one.

But the plot specifics of "Star Trek" are less important than the way the actors so comfortably slip into the outlines of the show's original characters, capturing their essence instead of just impersonating them. Abrams and his writers have created a sturdy enough world for those characters to inhabit: In some circles, Abrams, the creator of shows like "Alias" and "Lost," is hailed as a genius. While I loved the baroque intricacies of "Alias," "Lost" lost me in the last half of the first season, when I began to harbor a sneaking suspicion that the allegedly deepening mystery of the show was really just a crock. And Abrams' movie debut, "Mission: Impossible III," lacked the proper cinematic scale; it was no better than an "Alias" episode.

With "Star Trek," Abrams appears to have loosened up in some ways and become more disciplined in others. The movie's action sequences, which feature the usual computer-enhanced effects and show us lots of explosions and characters running hither and thither (as well as a few adequately choreographed fight scenes), are reasonably effective, if at times a little too busy. But the real value of "Star Trek" lies in its affable, anything-but-uptight vibe; it approaches its source material not on bended knee, but with a sense of humor (though never of mockery), even as it acknowledges the heartfelt idealism of the original show. No one in "Star Trek" wants to see a civilization (even a cranky one) destroyed; and the movie doesn't just glance over the sense of dislocation suffered by people who have been exiled from their homeland, as Spock has been. One of the recurring ideas of the movie is that home, and family, exist where you make them -- even on a ship dangling in the middle of space.

Shot by Dan Mindel, with production design by Scott Chambliss, "Star Trek" gets a strong sense of place from its visuals. The picture has a vital, organic feel and look, as opposed to a sterile one: The Enterprise's working innards vaguely resemble those of an old-fashioned submarine, even though they're a lot roomier. And from the exterior, the ship looks comfortingly familiar: I'd been afraid Abrams would monkey with it, or try to make it look more modern (as if such a thing were possible), but he reproduces it in all its utilitarian, futuristic glory -- he treats it as a classic design, like an Eames chair. "Star Trek" is filled with little stylistic references: At the beginning, the movie's title is shown to us in a typeface right out of Russian constructivism; the architecture on Spock's home planet, Vulcan, is a little bit Chrysler Building, a little bit Antoni Gaudí. The mishmash is, I think, intentional, an admission that even when we're going where no man has gone before, we're always building on what came before.

The sex appeal of the original "Star Trek" isn't lost on Abrams, either. He recognizes that it takes place in a galaxy far far away, in a happy time before George Lucas took all the sex out of space. He sees Kirk as Kirk sees himself: Being the captain of a starship is the equivalent of being a rock star -- there's always another girl, another planet, and Chris Pine plays the character with the same degree of swaggering sexual confidence. Even the half-human Spock gets some action. The movie invents an erotic frisson between Spock and Uhura (played, wonderfully, by Zoë Saldana, who looks as if she hails from a planet where everyone has the eyes of Bambi), which may or may not have been inspired by the Abbey Lincoln-style ode that Nichelle Nichols, as the original Uhura, sings to Spock in one of the show's episodes.

The casting is one of the most joyous aspects of "Star Trek." As the show's cast members trundled their way through numerous "Star Trek" movies (the last of those featuring the original actors was the 1991 "Star Trek VI: The Undiscovered Country"), they became increasingly paunchier and puffier. You might applaud them for soldiering on, but watching them age became a little depressing, especially since their youth was eternally on display in reruns and video and DVD sets. The actors here lovingly restore youth to the characters, which is its own way of paying tribute to the actors who originally played them. John Cho captures the sparkling, businesslike efficiency of George Takei's Sulu; Karl Urban has all the wry, no-nonsense charm of DeForest Kelley's Leonard "Bones" McCoy; and while the English of Anton Yelchin's Chekhov may be more intentionally mangled than Walter Koenig's was, he still makes words like "inwisible" sound like a subtle tribute.

It took me a while to warm up to Pine's Kirk. His bland handsomeness just can't match the compelling strangeness of Quinto's Spock -- but that's the point. In "Star Trek," Kirk and Spock butt heads from their first meeting, and they don't actually admit to liking (or even respecting) each other until the film's final moments. That's as it should be. Pine's Kirk, freewheeling and fast-thinking, makes decisions from the gut; he's the frat boy to Spock's honor student. But the two actors balance each other perfectly, and Quinto, in particular, gives a performance that's both richly shaded and quietly vibrant. Because his character isn't big on expressing emotion, Quinto has to give the quintessential interior performance -- he has to work the Vulcan mind meld on us. Nimoy did that beautifully in the television series, and Quinto, with his somber eyes and perpetually quizzical eyebrows, carries the torch here. Even his complexion looks like marble, a substance incapable of showing emotion until emotion is carved into it; Quinto does that from the inside out.

And so when Nimoy appears in this "Star Trek" as the older counterpart to Quinto's character -- this is where that time-bending plot device comes in -- we get to see both the man Spock grew out of and the man he'll grow into. Nimoy is playing the character who's already been where Quinto is boldly going, and he looks wonderful. He's got the face of an actor who's actually lived, not of one who's tried to hide the effects of living. His youth is alive in him, as opposed to being an indistinct, vaguely remembered thing. And he's perfectly at home in a movie that recognizes how reinvention can be a form of rejuvenation. The original "Star Trek" aired only from 1966 to 1969; you could say its life didn't really begin until after it was canceled. With "Star Trek" Abrams honors the show's legacy without fossilizing its best qualities. Instead, he's whisked it off to a planet where numbing nostalgia can't kill it, and where the future is still something to look forward to.