Treasury releases its evaluations of top banks' financial health -- but the federal budget reveals that the government's own fiscal position is shaky. 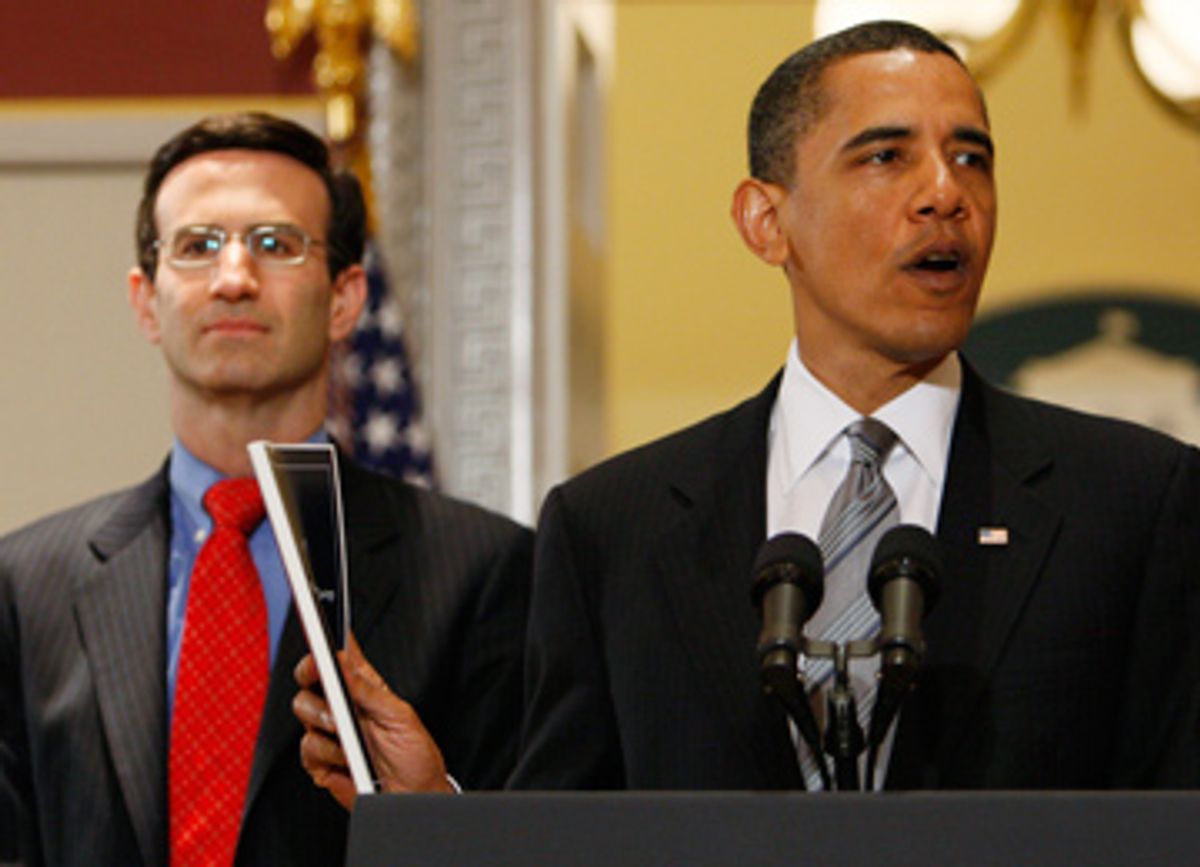 Would the United States government pass a stress test?

It was hard to resist asking the question Thursday. Through some unfortunate timing, the Obama administration's top economic and financial officials spent the day releasing both a detailed federal budget and the results of the Treasury Department's examination of the country's biggest banks. Not surprisingly, the spin on each, coming out of the White House, was that things were looking better.

"We must build a government of the 21st century -- a government that is more efficient and more effective," President Obama said in the morning, touting the programs his budget would eliminate for wasting federal money. "Today we have taken an important step toward building this kind of government -- not just for this generation of Americans, but for the sake of generations to come."

But the actual budget documents released Thursday made it awkwardly clear that if the government was a bank, it might be in danger of being undercapitalized. Though Obama and his aides were boasting about finding $17 billion in proposed cuts, that amounts to a minuscule fraction -- less than half of 1 percent -- of the $3.5 trillion the government plans to spend in the 2010 fiscal year, which begins Oct. 1. The savings, in fact, represent less than 2 percent of the deficit for next year; the administration says the government's revenues will fall nearly $1.2 trillion short of expenses.

Some of the proposed cuts did seem as if they should have been made a long time ago. The administration would save $142 million by ceasing payments to states to help them clean up mines that have already been cleaned up. Another $52 million would come from ending a program that pays cotton farmers to store their crop at government expense, letting them warehouse cotton for free until they can sell it for a price they like. Obama would cut $9 million in special road and jobs training programs for the area near Denali National Park in Alaska -- presumably not a cut a McCain-Palin administration would have requested. The administration would save $2.9 billion by not building any more than the 187 F-22 fighters the Pentagon has already ordered, since military officials have decided they don't need any more. Obama would eliminate most of the money earmarked for the oh-so-effective federal abstinence-only sex ed programs. And a cushy Education Department posting in Paris, as a representative to the United Nations Educational, Scientific and Cultural Organization, will be eliminated, saving $632,000 a year between salary, travel and the $77,000 the government has been spending on rent. That gig is rapidly becoming the $600 toilet seat of our time; from budget director Peter Orszag up to Obama, no one in the administration could run through the talking points on the cuts without pointing out the plans to whack that position. (As has been noted, that job is vacant at the moment.)

"Now, participation in UNESCO is very important, but we can save this money and still participate using e-mail and teleconferencing and a small travel budget," Obama said.

Republicans blasted the cuts as a meaninglessly small share of the federal budget. "The president has now proposed some modest spending reductions totaling a fraction of a percent of the trillions his budget would add to the debt," Senate Minority Leader Mitch McConnell of Kentucky said in a statement. "That's a start." GOP strategist Alex Conant, who worked in the White House budget office under George W. Bush, pointed out that Bush had proposed to cut between $12 billion and $18 billion each year during his second term.

What Republicans in Congress didn't mention, though Conant did, is the essentially make-believe nature of the proposed cuts, anyway. Just about every program in the federal budget has some kind of constituency out there, and some lawmaker is virtually guaranteed to fight to keep every cent of the $17 billion Obama wants to cut. Like the less-detailed budget blueprint Obama put out in February, none of what the administration released Thursday will become law on its own. Congress sets the actual funding levels for all the discretionary spending the budget covers; Obama can veto, or threaten to veto, their appropriations bills, but all the paper the White House shoveled out about the budget amounts to nothing more than a declaration of his negotiating position on the matter.

The bank stress test results, which came out a few hours after the budget plan, could be more immediately meaningful. Treasury Secretary Timothy Geithner insisted the tests -- which found the banks have already lost $400 billion since the financial crisis began, and might lose another $600 billion before long, to get to an even trillion bucks down the drain -- were actually good news. "There is reassurance in clarity," Geithner said in an afternoon press conference, which officials barred anyone from reporting on until it ended, even though Wall Street had already closed for the day. "We hope banks are going to get back to the business of banking."

Broad stock market indexes lost money Thursday, but the folly of judging economic policy by the day-to-day stock tickers is already pretty plain. Administration officials said they expected all of the 19 banks they subjected to the stress tests to be able to survive, more or less, but that they'd be ready to step in with more cash if needed. "Things are improving in financial markets, but we've got a long way to go," Geithner said. "It's just the beginning. And we're going to keep working to try to make sure this financial system is in a stronger position, strong enough position so it can provide the credit necessary for recovery." Looking at the budget documents, side by side with the stress test results, you had to hope that optimism would carry over beyond just the financial sector.