How we talk about the actions of other countries reveals the extent to which we exempt ourselves from our ostensible standards. 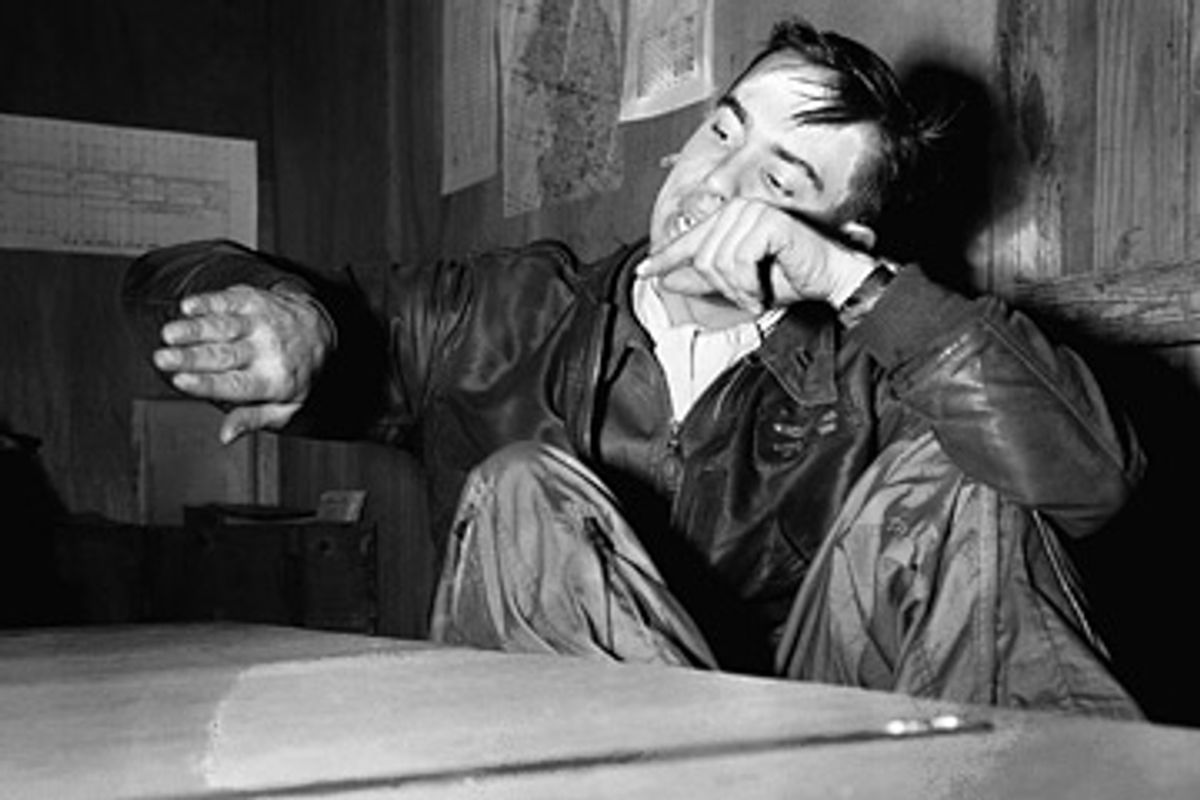 There's been a major editorial breach at The New York Times today, in this obituary of an American fighter pilot who was captured by the Chinese:

From April 1953 through May 1955, Colonel Fischer — then an Air Force captain — was held at a prison outside Mukden, Manchuria. For most of that time, he was kept in a dark, damp cell with no bed and no opening except a slot in the door through which a bowl of food could be pushed. Much of the time he was handcuffed. Hour after hour, a high-frequency whistle pierced the air.

After a short mock trial in Beijing on May 24, 1955, Captain Fischer and the other pilots — Lt. Col. Edwin L. Heller, First Lt. Lyle W. Cameron and First Lt. Roland W. Parks — were found guilty of violating Chinese territory by flying across the border while on missions over North Korea. Under duress, Captain Fischer had falsely confessed to participating in germ warfare.

So that's torture now?  To use the prevailing American mindset:  a room that doesn't meet the standards of a Hilton and some whistling in the background is torture?  My neighbor whistles all the time; does that mean he's torturing me?  It's not as though Fischer had his eyes poked out by hot irons or was placed in a coffin-like box with bugs or was handcuffed to the ceiling.

Also, using the editorial standards of America's journalistic institutions -- as explained recently by the NYT Public Editor -- shouldn't this be called "torture" rather than torture -- or "harsh tactics some critics decry as torture"?  Why are the much less brutal methods used by the Chinese on Fischer called torture by the NYT, whereas much harsher methods used by Americans do not merit that term?  Here we find what is clearly the single most predominant fact shaping our political and media discourse:  everything is different, and better, when we do it.  In fact, it is that exact mentality that was and continues to be the primary justification for our torture regime and so much else that we do.

Along those same lines, I learned from reading The New York Times this week (via The New Yorker's Amy Davidson) that Iraq is suffering a very serious problem.  Tragically, that country is struggling with what the Times calls a "culture of impunity." What this means is that politically connected Iraqis who clearly broke the law are nonetheless not being prosecuted because of their political influence!  Even worse, protests the NYT, there have been "cases dismissed in the past few years as a result of a government amnesty and a law dating to 1971 that allows ministers to grant immunity to subordinates accused of corruption."  And the best part?  This:  "The United States is pressing the Iraqi government to repeal that law."

Thankfully, we're teaching the Iraqis what it means to be a "nation of laws."  We Americans know how terrible it is to have a system where the politically powerful are permitted to break the law and not be held accountable.  A country which does things like that can fall into such a state of moral depravity that they would actually allow people to do things like this and get away with it.  Who could imagine living in a place like that?

One related point:  I'm truly amazed to watch the eruption of "controversy" today over the fact that Nancy Pelosi was briefed in 2002 on various aspects of the CIA's interrogation program, as though (a) this is some sort of new revelation and (b) it has any bearing on whether there should be investigations and prosecutions into Bush crimes.  As many of us have long pointed out, the extent to which Democratic leaders in Congress were complicit in Bush lawbreaking -- including torture -- is a major issue that needs resolution, and is almost certainly a key reason why there have been no investigations thus far.  There are real disputes still about what these Democrats were and were not told -- how complete the briefings were, the extent to which they obfuscated rather than illuminated what the CIA was doing -- though they were obviously told enough to have warranted further action on their part, to say the least.

But what's the point of all of this?  Secretly telling Nancy Pelosi that you're committing crimes doesn't mean that you have the right to do so.  And the profound failures of the other institutions that are supposed to check executive lawbreaking during the Bush era -- principally Congress and the "opposition party" -- is a vital issue that demands serious examination.  This dispute over what Pelosi (and Jay Rockefeller and others) knew highlights, rather than negates, the need for a meaningful investigation into what took place.

UPDATE:  Andrew Sullivan has related thoughts about this obituary.

UPDATE II:  I was going to try to excerpt parts of this Digby post regarding this topic but there's just no point.  It all needs to be read.