Would you rather lose your memory or your money? HBO's "The Alzheimer's Project" and Frontline's "The Madoff Affair" unearth your worst nightmares. 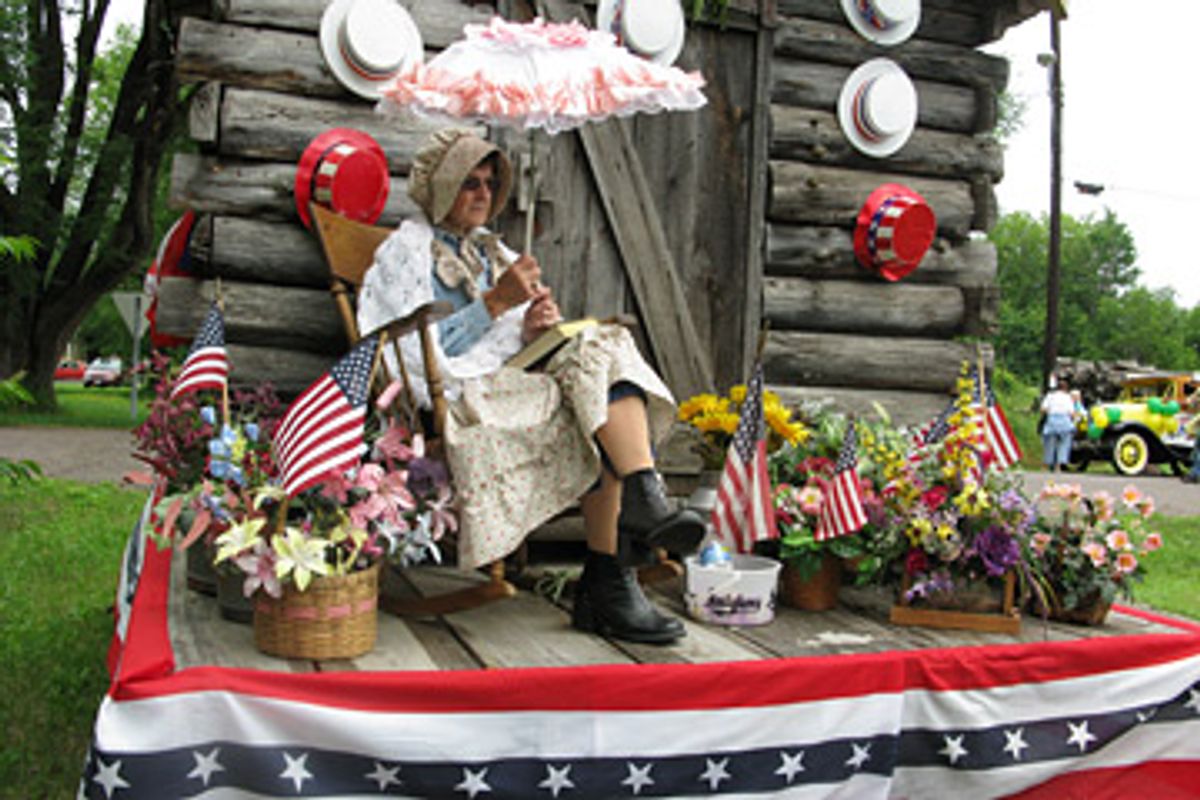 There's nothing worse than being robbed of your memory. Not being able to recognize your wife or children, becoming a ghost who haunts your family with your uncomprehending, confused stares? Most of us can't imagine anything worse. "I'd rather take a bullet to the head," my mom often tells me, in a tone that suggests that she expects me to do the honors. I am the executor of her estate, after all -- and apparently her executioner, too, if need be.

Others would argue that there's nothing worse than being robbed of your money. Not being able to purchase things for your wife or children, becoming a ghost who haunts your family with your empty pockets? Some of us can't imagine anything worse. "I can always live in a tent in your backyard," my mom often tells me when she reviews her decimated retirement savings, in a tone that suggests she might actually enjoy it, particularly compared to living in my house with me and my (screaming) baby and (magical fairy princess) toddler and two (barking, stinky) dogs.

Losing your memory and losing your money may be the two top-ranking fears among older people -- and by older people, I mean everyone over 37. While so many of us rage against the dying of the light by indulging in the countless frivolities of youth culture -- twittering, ice blendeds, ass pants, Adam Lambert -- it probably pays to step back and take a hard look at our futures. Far less sexy are the dark forces that await us there, from minivans filled with bitchy teenagers to bad knees, incontinence and finally, cheap coffins festooned with fake flowers and a few stragglers who strain to remember our names for the sake of a plate of broccoli-cheese casserole.

Bernie Madoff with my cash!

But then, some of us don't have to wait until the bitter end to watch as the world falls to pieces before our very eyes. Just look at once-esteemed investment specialist and "market maker" Bernie Madoff, who went from king of Wall Street to destroyer of fortunes overnight. For Madoff, it wasn't enough to burn and pillage his own village, he had to set half of the world ablaze along with it.

And if Frontline's "The Madoff Affair" (9 p.m. Tuesday, May 12, on PBS, check listings) is any indication, far from a vision of regret and self-hatred, Madoff chuckled softly to himself as he poured gasoline over many, many sizable fortunes, then struck a match. Who knew there was a sadistic, half-crazed anarchist behind that calm, professional demeanor?

"He confessed with pride," Lucinda Franks tells the camera. "Like, 'Look what I did. I mean, you're not gonna believe what I did when you get to the bottom of this.'"

"Here's a guy who thinks he got over on the world for the last 30 years and doesn't have a bit of remorse," adds securities fraud lawyer Ross Intelisano.

Harder to parse is the culpability of the other players in the Madoff scandal. While most of the investment firms that funneled money to Madoff were unaware of Madoff's treachery, they clearly neglected to perform due diligence, the investment term for carefully and thoroughly examining the soundness of the investments you're advocating. The investment firm Fairfield Greenwich, in particular, entrusted $7.5 billion to Madoff without adequately exploring the man's practices. Like so many other firms, they were willing to turn a blind eye as long as millions of dollars in commissions were rolling in.

You also have to wonder whether Madoff had some kind of pull with the Securities and Exchange Commission, the way it systematically ignored multiple warnings from whistle-blower Harry Markopoulos, the financier who at one point went so far as to send a detailed memo to the SEC warning that Madoff was quite clearly up to something fishy.

The remarks of Michael Bienes, one of Madoff's early partners who was interviewed extensively for the Frontline special, give us some idea of how one man could pull off such a colossal fraud.

Frontline: What made you think that he could return 20 percent?

Bienes: I don't know! How do I know? How do you split an atom? I know you can split them, I don't know how you do it. How does an airplane fly? I don't ask.

Frontline: Did you ask him?

Bienes: Never! Why would I ask him? I wouldn't understand if he explained it. Something with arbitrage between bonds and stocks and blah blah blah.

We really are living in the age of the idiot, aren't we? Most people are so comfortable with their ignorance that common wisdom is no longer wise. My new rule? Whatever course of action everyone else agrees on, do the opposite.

Whether you've been thinking this way for years or just a few months now, Frontline's "The Madoff Affair" (along with the new Vanity Fair tell-all by Madoff's secretary) provides a nice excuse to gawk at the misfortunes of the fortunate. Of course, once you take a closer look at the list of Madoff's victims and consider what it would be like to lose a nest egg you spent a lifetime building, or factor in the unions, pension funds and charities that took a hit, this taste of schadenfreude becomes a little less palatable. What kind of a man could lay ruin to so many fortunes with a twinkle in his eye?

"I have no interest in psychoanalyzing Madoff," says Burt Ross, who lost most of his net worth, around $5 million, investing with Madoff. "The man is a monster. He's evil. I cannot fathom hurting every single person I met, every dear friend. It just doesn't get worse than that."

If you're starting to think that being robbed of your life savings would be the worst thing ever, HBO's four-documentary series "The Alzheimer's Project" is here to demonstrate just how unfathomably awful it is to live with limited access to your memories.

The first documentary in the series, "The Memory Loss Tapes" (9 p.m. Sunday, May 10, on HBO), offers an up-close look at how Alzheimer's affects its victims. This isn't something most of us want to see, but it does impress upon us the relative triviality of things like plundered fortunes and dear friends who turn out to be monsters. From 76-year-old Fannie Davis, recently diagnosed with Alzheimer's, who's upset that she'll lose her independence when she fails a driving test, to 77-year-old Josephine Mickow, a later-stage victim, who wanders around her daughter's fenced front yard, singing to herself, the documentary gives viewers a very personal look at the shape of a disease that afflicts 5 million Americans.

Sadly, no matter how valiantly patients and their families struggle to maintain some semblance of normalcy and happiness, the reality is that a life without memory is, in most cases, a living hell. You look at someone like 63-year-old Joe Potocny, who's worked with computers all his life, keeps a blog about his battles with the disease, and seems to have a good sense of humor and a positive attitude about most things, and figure he's the kind of person who can withstand the challenges of losing his memory. Instead, Potocny seems incredibly depressed most of the time, and tells the camera at one point that he plans to say goodbye to his family and kill himself as soon as he thinks most of his mind is gone for good.

Just when you think that's an extreme solution, you meet perpetually confused 75-year-old Yolanda Santomartino, who spends most of her waking hours at her nursing home crying about the snakes she sees everywhere. A few other nursing home residents seem to do nothing but weep and ask where they are and what's happening.

Thankfully, while the reckoning of "The Memory Loss Tapes" is probably necessary, the other documentaries in the series are a little more hopeful. "Grandpa, Do You Know Who I Am?" (7:30 p.m. Monday, May 11) is aimed at grandchildren who are coping with their grandparents' Alzheimer's. "Momentum in Science" (8 p.m. Monday, May 11, and 8 p.m. Tuesday, May 12) examines what researchers have learned about how Alzheimer's affects the brain, what causes it, and what kinds of treatments might slow its progression. "The Caregivers" (7 p.m. Tuesday, May 12) offers a look at how five different families are coping with their loved ones' Alzheimer's.

But whether you take a bullet to the head or wind up in a tent in your daughter's backyard, it pays to remember one thing: We all end up with nothing eventually. See you in hell, sea donkeys!

Bernie Madoff Frontline Hbo I Like To Watch Pbs Television