Big healthcare industry players promise the White House they'll get on board with reform -- so they don't get trampled by it. 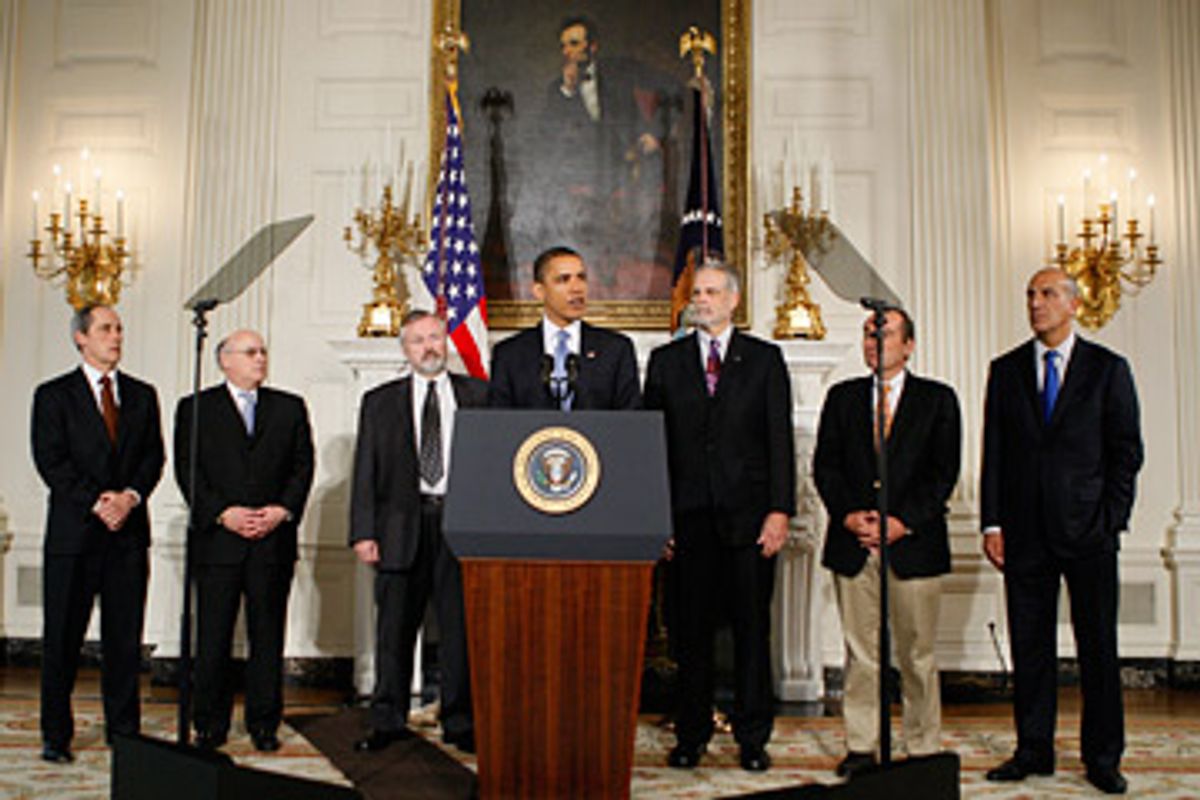 If Harry and Louise were around today, the fictional couple from political ads that helped kill healthcare reform 15 years ago would probably still be worrying about their coverage. But instead of complaining that the government was trying to make healthcare decisions for them, they -- like millions of other Americans -- might be wondering why their insurance premiums keep rising or how they'd pay their medical bills if they lost their jobs.

That, at least, was the message coming out of the White House Monday. Major players in healthcare, from the drug companies to the insurance providers to hospitals and doctors, joined President Obama to commit to serious reform by the end of the year. Some of the organizations that have fought hardest against changing the system in the past are -- for now, at least -- saying they'll work for it this time around. To demonstrate how serious they are, they joined Obama Monday to say they'll work voluntarily to cut the growth rate of healthcare costs by 1.5 percent each year for the next decade. Unchecked, costs would increase by more than 6 percent a year, so the administration says the country -- private employers and the government combined -- would save $2 trillion from the effort. An average family of four could save $2,500 a year within five years.

But the announcement could mean more politically than financially -- especially since the administration admitted there's no way to force the groups to do what they say they'll do. The proposal from the healthcare players was light on specifics, but it was fairly heavy on symbolism; getting everyone from the Service Employees International Union to Pharmaceutical Research and Manufacturers of America on the same page before serious debate on healthcare legislation begins means the White House has the political momentum, and opponents of reform don't.

"What's brought us all together today is a recognition that we can't continue down the same dangerous road we've been traveling for so many years, that costs are out of control, and that reform is not a luxury that can be postponed but a necessity that cannot wait," Obama said. "It's a recognition that the fictional television couple, Harry and Louise, who became the iconic faces of those who opposed healthcare reform in the '90s, desperately need healthcare reform in 2009. And so does America."

Among the groups involved in the announcement were America's Health Insurance Plans, a lobbying group for insurers and a successor to the organization that ran the Harry and Louise ads that helped kill former President Bill Clinton's healthcare reform push in the 1990s. Doctors, represented by the American Medical Association, were on board, even though proposals to tie insurance payments for services to the effectiveness and efficiency of the care involved has many physicians anxious. Medical device makers, hospitals and unions signed on, too.

Some of the savings could come from implementing common billing practices and insurance claim forms, from reducing unnecessary -- but expensive -- tests and procedures, from improving electronic medical records to coordinate care better and other back-end steps. But another part of the push will involve more preventive care, hoping to keep people healthy rather than treating them when they get sick, and evaluating current practices and phasing out treatments that don't work. Those could prove more difficult to put in place.

Administration officials played the news cannily, organizing a conference call Sunday but barring reporters from writing about it until 9 p.m., which meant Monday's papers previewed the announcement, and the White House could get two days of coverage out of the news. On Sunday, aides portrayed the agreement as a major sign of progress, saying the groups signed on because they recognized that reform was coming. Fixing the healthcare system is broadly popular; by signing up with Obama at the outset, the corporate interests involved can influence the process, rather than sitting and waiting for reform to happen to them. (Some liberal bloggers, including Salon contributors David Sirota and Robert Reich, worried that Monday's announcement will mean the established healthcare system co-opts Obama's mandate for change.)

By Monday, Obama was already looking ahead to the next step. Without broad reforms, he said, the cost reductions won't work. "The only way these steps will have an enduring impact is if they are taken not in isolation, but as part of a broader effort to reform our entire healthcare system," he said.

When Congress takes up healthcare later this summer, Obama may need all the political chits he can line up ahead of time. His first pick for secretary of Health and Human Services, Tom Daschle, told Politico recently he still thinks reform has only a 50-50 chance of passing. Privately, Republican strategists said Monday that the White House had started the debate off well by lining up such broad support so early.

But the GOP was already showing signs it may try to resist. "The administration has yet to answer the fundamental question of how to pay for its massive multi-trillion healthcare plan," House GOP leader John Boehner said in a statement. "Will the administration raise taxes on families and small businesses? Will it ration care so that families and seniors face long waits for medical treatment? Will it borrow even more money and pass the debt on to our kids and grandkids?" Harry and Louise may have joined the reform effort this time around. But that doesn't mean someone else isn't still planning to use their old script.