It's cheap -- but can you swallow it?

In this slumped economy, fast food restaurants are beckoning with their impossibly thrifty value menus. I tried them so you don't have to. 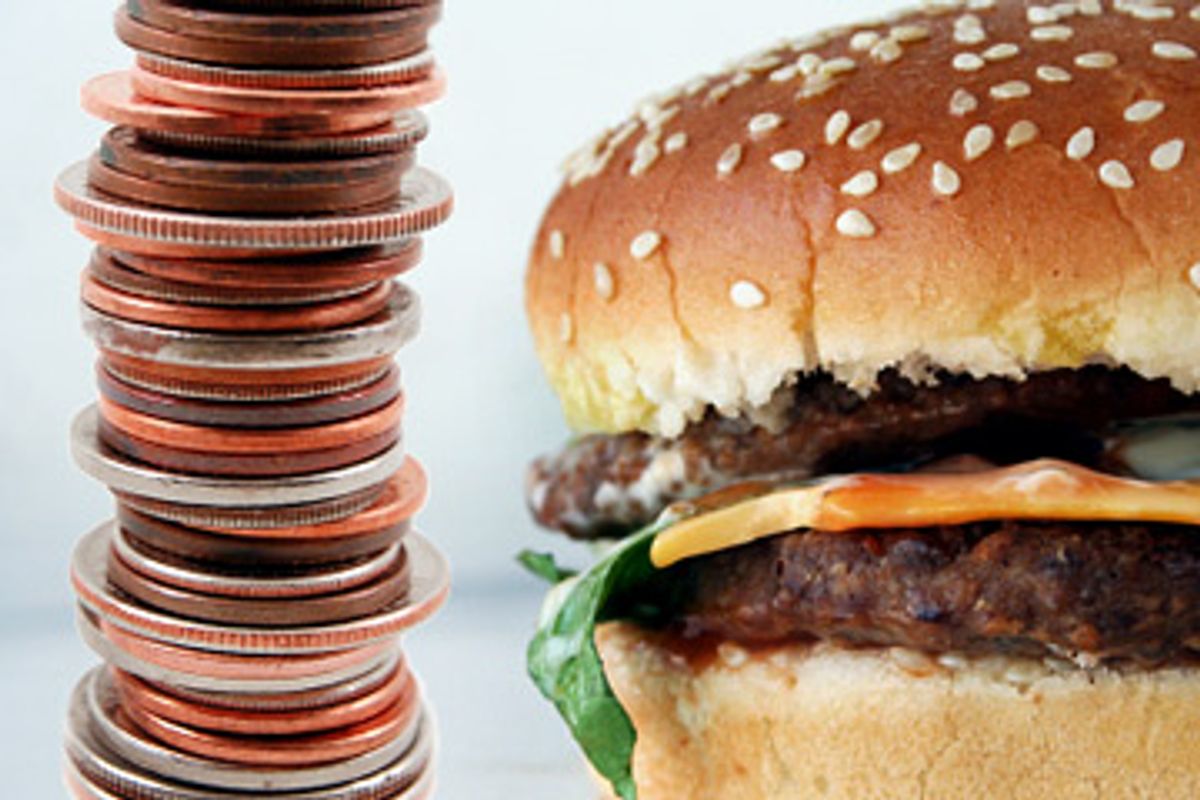 The past few years have been an age of unprecedented food snobbery, a time of green markets and artisanal produce, when even casual foodies are addicted to "Top Chef" and restaurants list their heirloom ingredients like a wine list. From food blogs to best-selling books, food is not just part of a national conversation, it's also an aspirational lifestyle -- to eat organic is to live the good life.

Meanwhile, fast food restaurants became symbolic of our cultural rot. "Fast Food Nation" and, later, "Super Size Me" waved tent-size flags about the dangers of American overindulgence. For a certain segment of the population, what once seemed like a guilty pleasure became more akin to moral defeat. Comedian Patton Oswalt seemed to sum it all up when he called one egregious KFC meal a "failure dish in a sadness bowl."

But an economic crisis has a way of upending the landscape. Whole Foods suffered a body blow, fine dining restaurants slashed their prices, while McDonald's emerged from 2008 one of only two stocks to actually close up, with a 4.5 percent increase. (The second was that other vilified corporation, Wal-Mart.) Fast food restaurants like Wendy's have seen a boost in sales, too, no doubt buoyed by a newfound desperation for cheap eats. And while I have no sense that penny-pinching gourmands have fled Chez Panisse for the Golden Arches -- I suspect, instead, they are at home, stirring their beans, curing their own bacon, learning to make their own cheese -- it sure does seem as if cheap, easy comfort food is making a comeback.

And so fast food restaurants have been touting their value menus -- from McDonald's iconic dollar items to KFC's brand-new Ultimate Value Menu to Taco Bell's almost criminally cheap 79-99 cent beef-and-cheese volcanoes. What can you possibly get for a dollar? That's what I wanted to find out.

Like a lot of suburban kids in the late '70s, I grew up in thrall to fast food restaurants. My parents were health-conscious, latter-day hippies who rightly suspected that choosing your dinner for the free gift that came along with it wasn't exactly a path to lifelong health. Because my access to fast food was limited, of course, I craved it all the more, sliding into the predictable college rut of delivery pizzas, Taco Bell bean burritos and Wendy's Junior Bacon Cheeseburgers. Ever since I stopped paying for dinner with the spare change from my couch cushion, however, my patronage of fast food restaurants has dwindled. I pride myself on having something of a palate. But I'm only human, and sometimes, when the moon is right, the hankering strikes.

These days, like many Americans, I'm on a severely contracted budget. So I embarked on a bargain-hunting franchise crawl over the course of two greasy afternoons. Turns out you can get a lot for a buck -- though whether you want it is another question entirely.

The McDonald's Dollar Menu has long been the savior of college students and families alike, and many a grateful, cash-strapped stoner can expound on the joys of the dollar double cheeseburger -- at least, they could until late October 2008, when rising food prices forced McDonald's to retire the beloved sandwich from its one-buck glory. (The company replaced it with something called a McDouble, which has one less slice of cheese; try as I might, I could not find one in New York.)

The Dollar Menu at a New York McDonald's is a somewhat paltry, sad affair -- a handful of offerings, mostly dessert. On other parts of the menu, you find the lavish 800-calorie Angus Burgers and the much-touted $4 iced mochas. Despite recession-friendly bargain pricing, McDonald's also seems to be upscaling itself, nudging up its price point for food that's just a wee bit tastier and fresher, positioning itself as an alternative to struggling ventures like TGI Friday's and Starbucks. Meanwhile, my Dollar Menu choices had been whittled down to the following: four-piece Chicken McNuggets, a hot fudge sundae, two baked apple pies, a fruit and yogurt parfait and a small soda. It was like a 5-year-old's last meal request.

I added a $1.09 hamburger onto the pile for curiosity's sake. I hadn't tasted one in decades. And though it arrived pale and pathetic -- a thin, grayish patty of spongy meat, which appeared to have been gnawed on one corner, tossed carelessly between a bun -- I was surprised to find that, contrary to appearances, it was not completely terrible, with its familiar tang of onion and pickle. That's the thing, right? Odious as it might be, most fast food is not completely terrible. Can't say that for the Chicken McNuggets, however; they were stale and lukewarm, and even gobs of barbecue sauce couldn't drown their mediocrity. (As for the soda, the low-carbonation, high-syrup Diet Coke at McDonald's has long been my favorite Diet Coke, even in my high-snob years. Yes, I have a whole taxonomy of Diet Coke, and no, I won't mention it again.)

The duo of apple pies, meanwhile, were quite good. Baked now, rather than fried as they were when I was a kid, the pies make a tasty little hot pocket of a dessert, and at 50 cents a pop they practically feel like parting gifts, like they are almost literally giving them away. The hot fudge sundae, on the other hand, was a bust. It looked good. It sounded good. But the vanilla soft-serve was tasteless, the hot fudge congealed. The concoction tasted of cold nothing. It was like a dessert served on the Holodeck.

Over at Burger King, value menu items seem to be falling from the industrial ceilings. There are more than a dozen choices, including a small bacon cheeseburger, a side salad, chicken tenders and mozzarella sticks. Burger King has been struggling during the recession -- sales slowed in March, though profits went up in April -- and the kitchen-sink value menu had the same whiff of desperation palpable in its advertising, like when a dude in a Burger King mask dances with ass-shaking women wearing hot pants stuffed with SpongeBob Squarepants tiles.

Compared to McDonald's, there was a veritable feast of offerings, but I found the food uniformly dreadful. Take, for instance, the BK Burger Shots, two "sliders" microwaved for a few seconds and delivered depressingly on a shriveled bun, achieving the rare feat of making White Castle seem fancy. The cheesy tots sounded like gooey state fair-style decadence but turned out to be greasy little pellets of starch, a cynical outgrowth of the "they'll eat anything fried" school of thought.

The Whopper Jr. was a bargain, but its signature flame-broiled taste was almost comically fake, like "flame-broiled" in quotation marks. The slice of Dutch apple pie was a generous portion, but its crust and crumbled topping had become soggy from lingering on a shelf. The only bright spot was the Spicy Chick'n Crisp -- a decent breaded cutlet, a bit salty but with the right amount of heat. Even Burger King couldn't screw up a simple, quick chicken sandwich.

The third-biggest burger chain was the first to introduce a Super Value Menu in 1989, and nearly 20 years later, it's still pretty robust: Ten items, including three wraps and two burgers, for $1-$3. The Grilled Chicken Go Wrap was a misfire -- a chunk of processed chicken in a plasticky tortilla, gloopy with mayo and topped with an almost insulting smattering of cheddar. But my old sophomore year companion, the Jr. Bacon Cheeseburger, was still solid. And the Double Stack -- two square patties topped with melted cheese -- was the best sandwich I had in the whole value menu crawl. Simple, cheap, greasy satisfaction.

Years after I last stepped inside a Wendy's, I found that its still churns out the most dependable fast food burger fare this side of In-N-Out. Despite the over-the-top Baconator promotions and the gaggle of trendy mixed-in swirl dessert treats, Wendy's understands what it does well. For those who would slag the chain, I have but one word of defense: Frosty.

HONORABLE MENTION: Frosty (not officially on the value menu but still an affordable $1.50)

There is something unsettling about the audaciously punctuated "Why Pay More!" Taco Bell value menu. I don't mean health concerns -- though those are aplenty -- but the confounding question of how a restaurant could possibly profit selling nachos at 79 cents. The nachos come covered in refried beans and goopy fluorescent orange cheese drizzled with red sauce, a wan imitation of Tex-Mex that made me weep for my years spent in Austin, Texas, but still … 79 cents! Even for recession prices, that feels low. The 89 cent Cheesy Double Beef Burrito, meanwhile, was so hefty I could practically bench-press it. It was crammed with the chain's signature chili-cheese artery-clogging mix. Having not done a keg stand earlier in the evening, I found it a bit intense.

Not every item on the Why Pay More! menu was such a gut punch, however. The 89 cent Chicken Soft Taco is a welcome change in the value-menu world of mediocre chicken wraps -- nicely spiced chicken with shredded iceberg, cheddar and not a drop of mayonnaise. At less than 200 calories, it was even somewhat healthy. Having eaten approximately 5 billion bean burritos during my college stint, I felt no need to try one again, but more than a decade after I graduated, the price was the same: 89 cents.

Last week, word spread that a free promotion for KFC's grilled chicken erupted into a riot after a New York store ran out of free samples. The rumors turned out to be false, but I suspect no one will be shaking their fists in the street over the restaurant's recently added Ultimate Value Menu. That's not to say it's terrible, just that it's unremarkable.

The KFC Snacker is a puny chicken sandwich -- a sliver of a chicken tender on a doughy roll slathered with that ubiquitous mayonnaise again. The Toasted Wrap takes the same ingredients and slaps them into a tortilla. The best thing you can say about the KFC value menu is that it doesn't limit itself to drab chicken throwaways. The unrivaled star is two biscuits for a buck.

Anybody coming to KFC hoping to save money (and avoid that original-recipe fried chicken) would do much better to forgo the Snacker and the nasty wraps and order those biscuits with a few side dishes -- none of which are featured on the Ultimate Value Menu but each ringing in at only a buck and change: The Southern-style baked green beans, the BBQ baked beans and the mashed potatoes and gravy, which for my money is some of the best fake mashed potatoes you can find, the kind of decadence I crave when the fast food claw hits.

More than the other chains, the KFC value menu felt like a gimmick, a bait-and-switch -- perhaps because the restaurant was plastered with posters that screamed "99 cents!" but then offered so little in the way of variety and taste. I should add that, by the time I arrived at KFC, I was somewhat ill. Eating so much fast food had made me sluggish, even fuzzy-headed. My eyes were strobing, and not to pull a Morgan Spurlock, but I did, briefly, think I might be having a heart attack. This should come as a surprise to exactly no one.

But hey, it was a bargain!