We tortured to justify war

Dick Cheney keeps saying "enhanced interrogation" was used to stop imminent attacks, but evidence is mounting that the real reason was to invent evidence linking Saddam Hussein to al-Qaida. 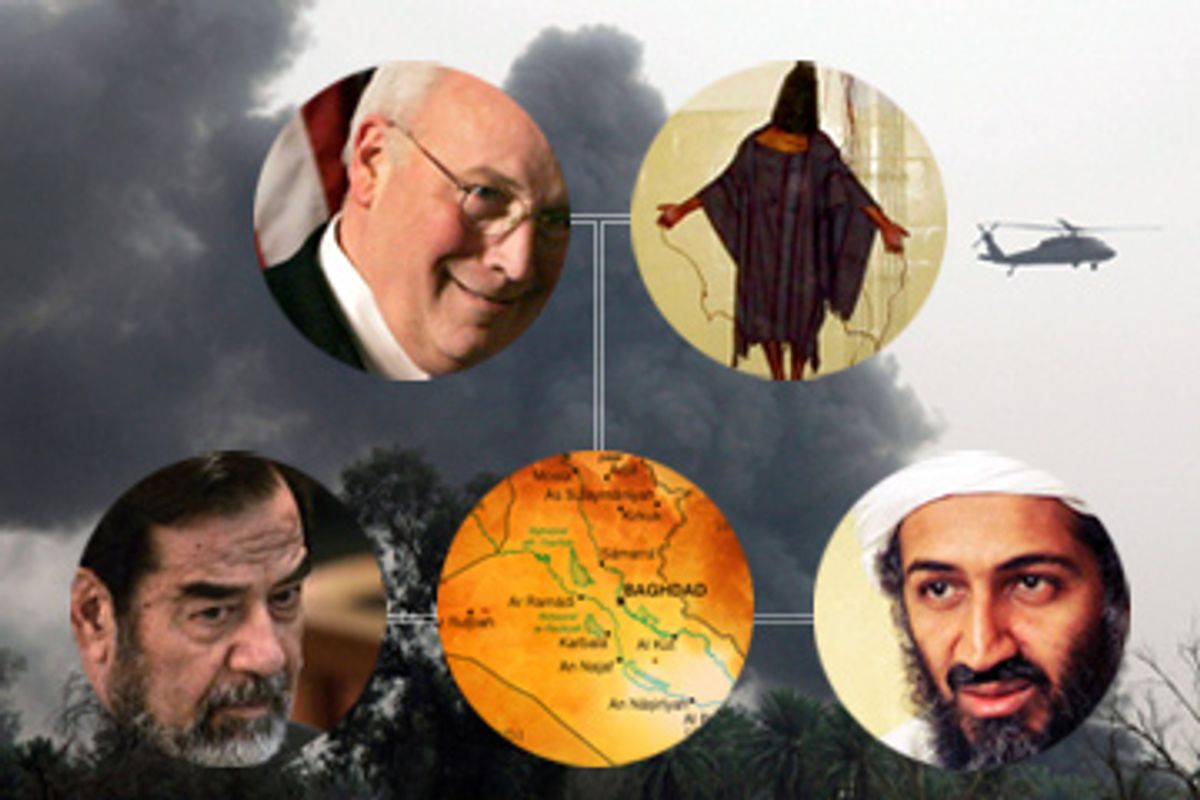 The single most pertinent question that Dick Cheney is never asked -- at least not by the admiring interviewers he has encountered so far -- is whether he, Donald Rumsfeld and George W. Bush used torture to justify the illegal invasion of Iraq. As he tours television studios, radio stations and conservative think tanks, the former vice-president hopes to persuade America that only waterboarding kept us safe for seven years.

Yet evidence is mounting that under Cheney’s direction, "enhanced interrogation" was not used exclusively to prevent imminent acts of terror or collect actionable intelligence -- the aims that he constantly emphasizes -- but to invent evidence that would link al-Qaida with Saddam Hussein and connect the late Iraqi dictator to the 9/11 attacks.

In one report after another, from journalists, former administration officials and Senate investigators, the same theme continues to emerge: Whenever a prisoner believed to possess any knowledge of al-Qaida’s operations or Iraqi intelligence came into American custody, CIA interrogators felt intense pressure from the Bush White House to produce evidence of an Iraq-Qaida relationship (which contradicted everything that U.S. intelligence and other experts knew about the enmity between Saddam’s Baath Party and Osama bin Laden’s jihadists). Indeed, the futile quest for proof of that connection is the common thread running through the gruesome stories of torture from the Guantánamo detainee camp to Egyptian prisons to the CIA's black sites in Thailand and elsewhere.

Perhaps the sharpest rebuke to Cheney's assertions has come from Lawrence Wilkerson, the retired Army colonel and former senior State Department aide to Colin Powell, who says bluntly that when the administration first authorized "harsh interrogation" during the spring of 2002, "its principal priority for intelligence was not aimed at pre-empting another terrorist attack on the U.S. but discovering a smoking gun linking Iraq and al-Qaida."

In an essay that first appeared on the Washington Note blog, Wilkerson says that even when the interrogators of Ibn al-Shaykh al-Libi, the Libyan al-Qaida operative, reported that he had become “compliant” -- in other words, cooperative after sufficient abuse -- the vice-president’s office ordered further torture of the Libyan by his hosts at an Egyptian prison because he had not yet implicated Saddam with al-Qaida. So his interrogators put al-Libi into a tiny coffin until he said what Cheney wanted to hear. Nobody in the U.S. intelligence community actually believed this nonsense. But now, al-Libi has reportedly and very conveniently "committed suicide" in a prison cell in Libya, where he was dispatched to the tender mercies of the Bush administration's newfound friends in the Qaddafi regime several years ago. So the deceased man won't be able to discuss what actually happened to him and why.

Wilkerson's essay was followed swiftly by an investigative report in the Daily Beast, authored by former NBC News producer Robert Windrem, who interviewed two former senior intelligence officers who told him a similar story about a different prisoner. In April 2003, U.S. forces captured an Iraqi official named Muhammed Khudayr al-Dulaymi, who had served in Saddam's secret police, the Mukhabarat. Those unnamed officials said that upon learning of Dulaymi's capture, the vice-president's office proposed that CIA agents in Baghdad commence waterboarding him, in order to elicit information about a link between al-Qaida and Saddam. Evidently that suggestion was not enforced by Charles Duelfer, the head of the Iraq Study Group who controlled Dulaymi's interrogation.

The same kind of demands were directed toward interrogators in Guantánamo, according to the testimony of former Army psychiatrist Charles Burney, who testified that he and his colleagues interrogating prisoners at the detention camp felt "pressure" to produce proof of the mythical link.

"While we were there, a large part of the time we were focused on trying to establish a link between al Qaida and Iraq and we were not successful in establishing a link between al Qaida and Iraq," he told the Army inspector general. "The more frustrated people got in not being able to establish that link ... there was more and more pressure to resort to measures that might produce more immediate results." In other words, they were instructed to use abusive techniques, as recounted in the investigation of torture by the Senate Armed Services Committee.

Looking back, we now know that coerced confessions -- and in particular the questionable assertions by al-Libi -- were highlighted by administration officials promoting the case for war with Iraq, in the landmark Cincinnati speech by President Bush in October 2002 and in Colin Powell’s crucial presentation to the U.N. Security Council in February 2003, the eve of the war.

Whether Bush, Cheney and their associates were seeking real or fabricated intelligence, they knowingly employed methods that were certain to produce the latter -- as American officials well knew because those same techniques, especially water torture, had been used to elicit false confessions from captured Americans as long ago as World War II and the Korean conflict.

Cheney now claims that he preserved the country from terrorism and saved thousands and perhaps hundreds of thousands of lives. We need a serious investigation, with witnesses including the former vice-president under oath, to determine what he and his associates actually did with the brutal powers they arrogated to themselves -- because instead their actions cost thousands upon thousands of American and Iraqi lives, all in the service of a political lie.