Holy conspiracy theory! The Illuminati have hatched a plot to destroy the Vatican in this "Da Vinci Code" follow-up, and only Tom Hanks can save the faithful. 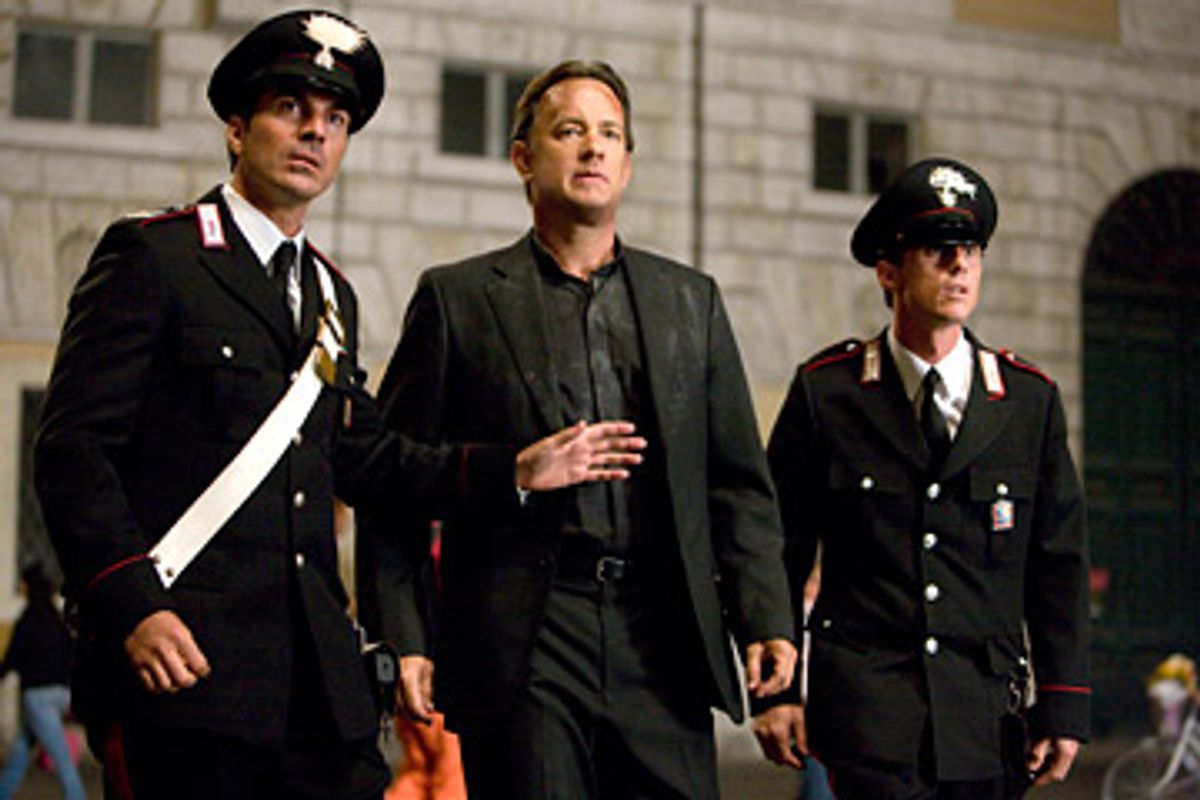 "Angels & Demons," Ron Howard's follow-up to the stiff, stately 2006 "The Da Vinci Code," might have been classy, entertaining junk -- if only it were entertaining. The picture is based on the Dan Brown bestseller of the same name, which was published in 2000, three years before Brown really hit big with "Da Vinci." As in "The Da Vinci Code," our hero is once again Harvard symbolist Robert Langdon (once again played by Tom Hanks, this time with a strange, matted coif that looks as if it should be topped by Ruth Buzzi's hairnet). Because he knows so much about symbols and stuff, Langdon is summoned to Rome to investigate a mysterious threat: Apparently, an ancient secret brotherhood of eggheads known as the Illuminati have hatched a plot to annihilate -- or should that be annihilati? -- the Vatican with a giant ball of light. Langdon is persona non grata at Vatican City -- the officials have repeatedly refused to let him riffle through their archives for his research, much as, in real life, the Vatican refused to let Ron Howard film there -- but now the guys in the lace dresses really need his help. When he shows up, he's met by Stellan Skarsgard, as the commander of the Swiss Guard, with a glare of disdain. "What a relief, the symbolist is here," he deadpans. Little does he know that Langdon's brilliant ability to say, "Hey! That ecclesiastical emblem is upside-down!" could possibly save his skin.

In between shots of somber religious statuary and fake Vatican backdrops -- shut out of the Vatican, Howard and his crew instead decamped to the racetrack at Hollywood Park, where they re-created St. Peter's Square and Piazza Navona with a reasonable amount of verisimilitude -- there's lots and lots of talking as Langdon follows clue after clue after clue, hot on the Illuminati's trail. Luckily, he has a beautiful Italian scientist, Vittoria (Ayelet Zurer), around to assist him. This is important, because much of the plot of  "Angels & Demons" unfolds in the dialog. For instance, Langdon will hold up an ancient book whose cover might be emblazoned with a title like "Libri of Scientia" in fancy letters, and Vittoria will exclaim helpfully, "My God -- that's the Book of Knowledge!" Howard may be hoping that if every narrative detail is repeated for the hard of hearing, the plot will actually end up making sense.

Fat chance. The script, by David Koepp and Akiva Goldsman, wanders around listlessly -- no one seems to know where the story is ultimately headed, least of all the writers. They certainly have packed a lot of stuff into "Angels & Demons," and the whole crazy tapestry might come off as rich and complex if you didn't think too hard about it. There are plenty of possible bad guys floating around to keep us guessing: Armin Mueller-Stael shows up, scowling, in full-on cardinal garb -- you know he's just got to be up to no good. And Ewan McGregor plays the Camerlengo, a priest who's entrusted with very important duties at the Vatican, like flying a helicopter -- you never know when that's going to come in handy.

The action unfolds against constant narration: When a character indicates, in a parched whisper, that Langdon should get over to Castel Sant'Angelo fast, he hippity-hops on his way, but not before exclaiming, "The Castle of the Angel!" Every revelation in "Angels & Demons" has a "Colonel Mustard in the library with the candlestick" vibe. Whenever something bad is about to happen, Hans Zimmer's score flares up like a bad case of stigmata. On the plus side, cinematographer Salvatore Totino does give the movie an aura of ominous pageantry, which is probably pretty hard to pull off at Hollywood Park.

There are a number of grisly details in "Angels & Demons": As the movie opens, the pope has just died, and the cardinals have gathered to vote on his replacement. The most promising candidates, the top pope hopefuls, are known as the Preferati, and the Illuminati baddies have kidnapped them with the intention of sending each one to a gruesome end. If William Castle had made "Angels & Demons," he might have opened the movie with the disclaimer, "No one will be admitted during the terrifying Pope on a Rope scene!" Except there is no pope on a rope in "Angels & Demons" -- I made that up, with the help of Father Guido Sarducci, aka comedian Don Novello. Come to think of it, why wasn't he enlisted to adapt this hunk of hokum? That would be hunkus of hokumus in the original Latin.