The debate in Washington has shifted from whether torture is wrong to what Nancy Pelosi knew about it. Did the former vice president win yet another bureaucratic war? 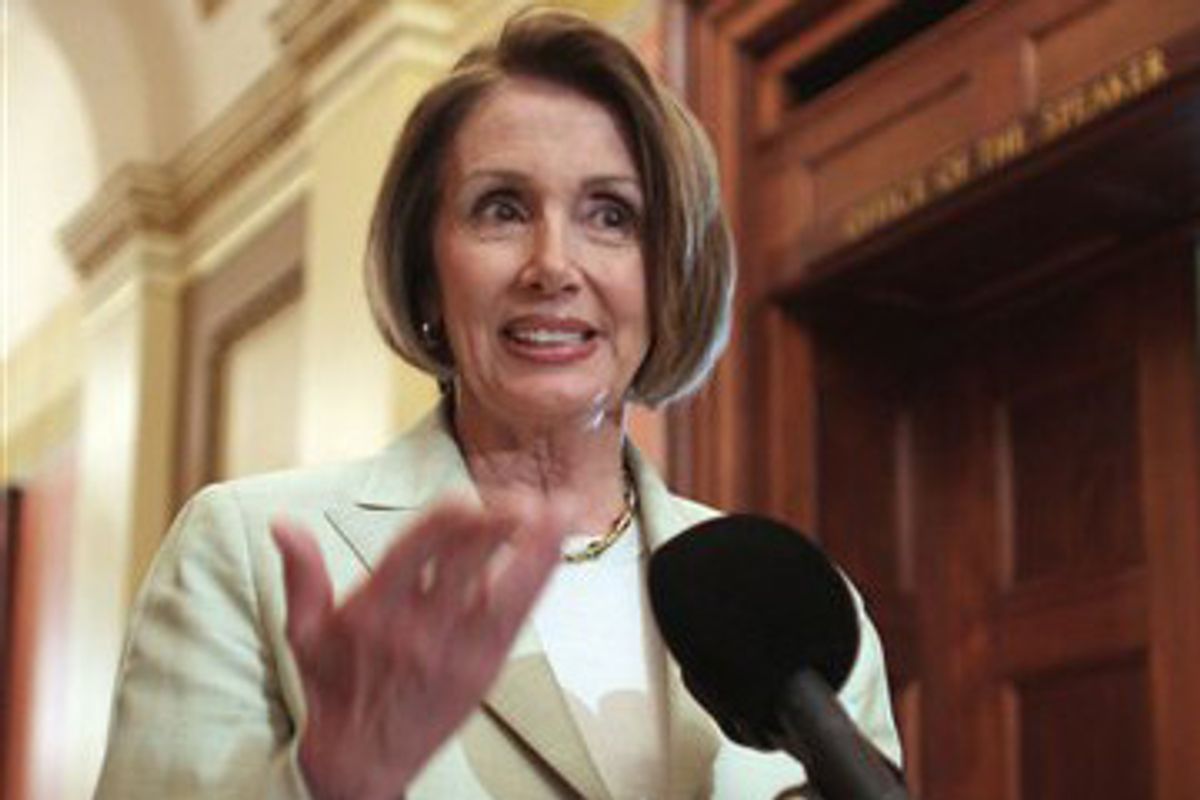 House Speaker Nancy Pelosi of Calif. is seen on Capitol Hill in Washington, Thursday, May 14, 2009.

You might have thought getting torture back in the news would be a bad move for any Republican; after all, it was the Bush administration that authorized the torturing. But the last few days have shown Dick Cheney knew exactly what he was doing when he went on TV last week and started talking about "enhanced interrogation": It was a masterstroke of bureaucratic warfare.

Because just five days after Cheney admitted that George W. Bush personally signed off on the CIA's plans to extract information out of detainees by no matter how they got it, the debate in Washington isn't even remotely focused on the ethical and moral repugnance of torturing your enemies. Instead, the city is buzzing about what House Speaker Nancy Pelosi knew about waterboarding. There's a little side conversation going about whether torture is effective -- but not whether it's wrong. And the Obama administration, which is trying desperately not to get involved in an endless battle over what Bush officials were doing behind closed doors, is getting dragged into it, too, and infuriating liberal supporters in the process.

Pelosi gets most of the blame for her own problems. No one forced her into giving a disastrous news conference Thursday, where she essentially picked a fight with the CIA, . (Though Cheney would have known, from watching the agency leak furiously to get back at Bush officials who crossed it, that if he could provoke any Democrat into a battle with spies, it would be a win for the GOP.) The speaker said the agency was lying about what they had told her in 2002 about interrogations, though she also acknowledged that the administration said they had opinions that might allow "enhanced techniques" to be used, and she claimed the CIA lied to Congress all the time during the Bush administration. But asked if she wished she had done more to object to whatever she was told, she demurred. "No letter or anything else is going to stop them from doing what they're going to do," she said. "My job was to change the majority in Congress and to fight to have a new president."

Even Democrats said privately afterwards that Pelosi had stumbled. Her deputy, Rep. Steny Hoyer of Maryland, had already said earlier in the week that "the facts need to be on the table" about what Pelosi and others in Congress knew about torture, but by Thursday, he was trying to brush the whole issue off as a distraction. Former Sen. Bob Graham, a Florida Democrat who was the chairman of the Senate intelligence committee in 2002, said the CIA's record of the briefings they gave Congress was inaccurate. But he could only indirectly defend Pelosi, since he didn't have written records of what the agency told lawmakers.

Sen. Joe Lieberman, who tends to stray from the Democratic fold on matters of national security, decided this was a good moment to freelance again, telling MSNBC on Thursday that he "totally disagreed" with her. Today, CIA director Leon Panetta -- who served in California's delegation to the House with Pelosi years ago -- felt compelled to write a memo Friday to agency employees pushing back against her. "Let me be clear," Panetta wrote. "It is not our policy or practice to mislead Congress."

Republicans, meanwhile, were gleeful. House GOP boss John Boehner -- who wasn't in the briefings, and supports "enhanced interrogation" anyway, meaning he can throw stones at Pelosi without fear of breaking his own glass house -- said Thursday Pelosi had no standing to call for investigations of the Bush administration if she knew about the torture policies. "They were well aware of what these enhanced interrogation techniques were," Boehner said. "They were well aware that they had been used. And it seems to me that they want to have it both ways. You can't have it both ways." Republican aides said they'd happily go out and talk about Pelosi every day if Democrats contine to raise the idea of a commission to investigate torture. By Friday, the partisan bickering had descended into open warfare. Rep. Steve King, a rabid right-wing Republican from Iowa, told Fox News Pelosi was "an enemy of national security" and should resign her post.

And just like that, barely 48 hours after a former FBI agent told Congress the torture programs hurt intelligence gathering, the story was rapidly becoming yet another Washington political mess. Obama -- who had already disappointed supporters by seeming to rule out prosecutions for the Bush officials who authorized torture -- burned more good will with his own base by refusing to release new photos of detainee abuse. Now House Democrats, who could have most easily pushed the administration into going along with some kind of investigation, have problems of their own.

Cheney, safely ensconced in his McLean, Va., mansion, must be chortling all the way to his cave every night. After three decades in the top levels of U.S. government, he knows better than most how to set his opponents against themselves.