The NYT sums up Obama's civil liberties record in one paragraph

Obama "has backtracked, in substantial if often nuanced ways, from the approach to national security that he preached as a candidate."

Among progressives, Democrats, liberals, Obama supporters and the like, there seems to be some debate about the extent to which Obama deserves criticisms for what he has done thus far in the realm of civil liberties, restoration of Constitutional principles, and reversing the severe imbalance between "security" and liberties -- major planks of his two-year-long campaign and among the most frequent weapons used to criticize the Bush presidency.  On that topic, here is the first paragraph of this New York Times article this morning by David Sanger, summing everything up:

President Obama’s decisions this week to retain important elements of the Bush-era system for trying terrorism suspects and to block the release of pictures showing abuse of American-held prisoners abroad are the most graphic examples yet of how he has backtracked, in substantial if often nuanced ways, from the approach to national security that he preached as a candidate, and even from his first days in the Oval Office.

Here's how the NYT describes the article on its front page: 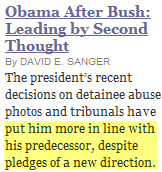 The opening paragraph of this Washington Post article today says much the same thing:

As a candidate for president, Barack Obama offered himself as a clear alternative to Bush-era anti-terrorism policies. Governing has proven muddier.

Both articles quote the hardest-core Bush supporters as heaping praise on Obama for what he has done in the area of "national security," terrorism and civil liberties ("Pete Wehner, a member of Karl Rove’s staff in the Bush White House [and a current National Review writer] applauded several of Mr. Obama’s decisions this week").  Indeed, all week long, and even before that, the greatest enthusiasm for Obama's decisions on so-called "terrorism policies" and civil liberties (with some important exceptions) has been found in the pages of The Weekly Standard and National Review.

Can anyone deny what the NYT and Post are pointing out today?  This is what happened this week alone in the realm of Obama's approach to "national security" and civil liberties:

Monday - Obama administration's letter to Britian threatening to cut off intelligence-sharing if British courts reveal the details of how we tortured British resident Binyam Mohamed;

Tuesday - Promoted to military commander in Afghanistan Gen. Stanley McChyrstal, who was deeply involved in some of the worst abuses of the Bush era;

Wednesday - Announced he was reversing himself and would try to conceal photographic evidence showing widespread detainee abuse -- despite the rulings from two separate courts (four federal judges unanimously) that the law compels their disclosure;

Friday -  Unveiled his plan to preserve a modified system of military commissions for trying Guantanamo detainees, rather than using our extant-judicial processes for doing so.

It's not the fault of civil libertarians that Obama did all of those things, just in this week alone.  These are the very policies -- along with things like the claimed power to abduct and imprison people indefinitely with no charges of any kind and the use of the "state secrets privilege" to deny torture and spying victims a day in court -- that caused such extreme anger and criticisms toward the Bush presidency.

What would it say about a person who spent the last seven years vehemently criticizing those policies to suddenly decide that the same policies were perfectly fine or not particularly bothersome when Obama adopts them?  How could that be justified?  What should one say about a person who vehemently objected to X when Bush did it, but then suddenly found ways to defend or mitigate X when Obama does it?  Just re-read that first paragraph from the NYT article today. What should a rational person say in response to what it describes?

It is absolutely true that there have been some important steps Obama has taken in the right direction that George Bush and John McCain would never have entertained, including banning interrogation techniques outside of the Army Field Manual, barring CIA secret prisons, guaranteeing International Red Cross access to all detainees, and releasing numerous Bush era OLC memos.  He deserves praise for those decisions and has received it here.   But other than the OLC memos, those steps all came in the very first week of his presidency in largely symbolic form.  At the time, in the first week, I wrote that Obama's first-week executive orders "meet or actually exceed even the most optimistic expectations of civil libertarians for what he could or would do quickly," but:

This is why the understandable enthusiasm (which I definitely share) over Obama's pleasantly unexpected commitment in the first few hours of his presidency to take politically difficult steps in the civil liberties and accountability realms should be tempered somewhat.  There is going to be very concerted pressure exerted on him by establishment guardians such as Hiatt (and the Brookings Institution, Jack Goldsmith and friends), to say nothing of hard-line factions within the intelligence community and its various allies, for Obama to take subsequent steps that would eviscerate much of this progress, that render these initial rollbacks largely empty, symbolic gestures. Whether these steps, impressive as they are, will be symbolic measures designed to placate certain factions, or whether they represent a genuine commitment on Obama's part, remains to be seen. Much of it will depend on how much political pressure is exerted and from what sides.

Obama deserves real praise for devoting the first few days of his presidency to these vital steps -- and doing so without there being much of a political benefit and with some real political risk.  That's genuinely encouraging. But ongoing vigilance is necessary, to counter-balance the Fred Hiatts, Brookings Institutions and other national security state fanatics, to ensure that these initial steps aren't undermined.

Since that first week, Obama has engaged in one action after the next to preserve many of the key prongs, and the essential architecture, of the Bush/Cheney abuses of executive power and civil liberties.  That's just factually true.  What's the point of closing Guantanamo if we're going to continue to keep people indefinitely in cages with no trial in Bagram, or if we simply transport a modified version of Guantanamo justice to the U.S.?  How can a President who repeatedly promised vast transparency embrace the most extremist Bush/Cheney secrecy powers?   How can a person who campaigned on the vow to end "Scooter Libby justice" and restore the rule of law take one extreme step after the next to shield from judicial scrutiny some of the most serious, brutal and highest-level crimes of the last eight years?

It's certainly true that there are other issues besides civil liberties and national security policies that are important.  The fact that he's been horrible in these areas doesn't mean he hasn't been good in others.  One can argue, if one likes, that these civil liberties issues don't really matter (a representative of Center for American Progress joined with two conservatives to claim exactly that yesterday on CNN), or one can argue that all that matters is that we fix the banking crisis and implement a new health care policy.  But I never heard any Bush critics -- not one -- say anything like that when these issues were front and center in the case against the Bush presidency.

Nobody who spent the last many years devoting themselves to opposing Bush/Cheney abuses of executive power and civil liberties wanted to have to do the same in an Obama presidency.  If you doubt that, just look at how intense was the celebratory praise directed at Obama from those factions in the first week.  But unless the opposition of the last eight years was really just a cynical means for opportunistically weakening and demonizing Republican opponents rather than opposing policies that one genuinely found dangerous and wrong, then the actions of Obama are leaving no other choice but to object and object strenuously.  As the first paragraph of today's NYT article put it, this week alone provided "the most graphic examples yet of how [Obama] has backtracked, in substantial if often nuanced ways, from the approach to national security that he preached as a candidate, and even from his first days in the Oval Office."  If nothing else, refraining from objecting will ensure that this continues further and further.

Yesterday morning, I was on WNYC's The Takeway discussing (briefly) the issue of Obama's military commissions and, more extensively, drug policy and decriminalization in Portugal.  That can be heard here.

President Obama's endorsements of Bush-Cheney antiterror policies are by now routine . . . . Mr. Obama deserves credit for accepting that the civilian courts are largely unsuited for the realities of the war on terror. He has now decided to preserve a tribunal process that will be identical in every material way to the one favored by Dick Cheney . . . Meanwhile, friends should keep certain newspaper editors away from sharp objects. Their champion has repudiated them once again.

Meanwhile, Law Professor Julian Ku notes that Obama Deputy Solicitor General Neal Katyal spent years arguing that military commissions generally (not merely Bush's specific version) were oppressive and un-American (h/t).  But now, thanks to Obama's embrace of them, Katyal is going to have to defend Obama's military commissions in court from challenge by the ACLU and other groups.  At least Katyal has the excuse that defending exactly that which he spent years excoriating is his job.  Obama supporters who are doing the same don't have that excuse.

UPDATE II:  Illustrating the irrationality that is used, Obama defenders are making the following two arguments to justify what he did on military commissions:

(1) Obama had no choice because he can't obtain convictions of accused terrorists in civilian courts because so much of the evidence was obtained by Bush's torture and thus can't be used;

Aren't those two propositions completely contradictory?  If Obama's military commissions (like civilian courts and courts-martial) won't allow evidence obtained via torture, then why can't he use our normal court system to try accused terrorists?