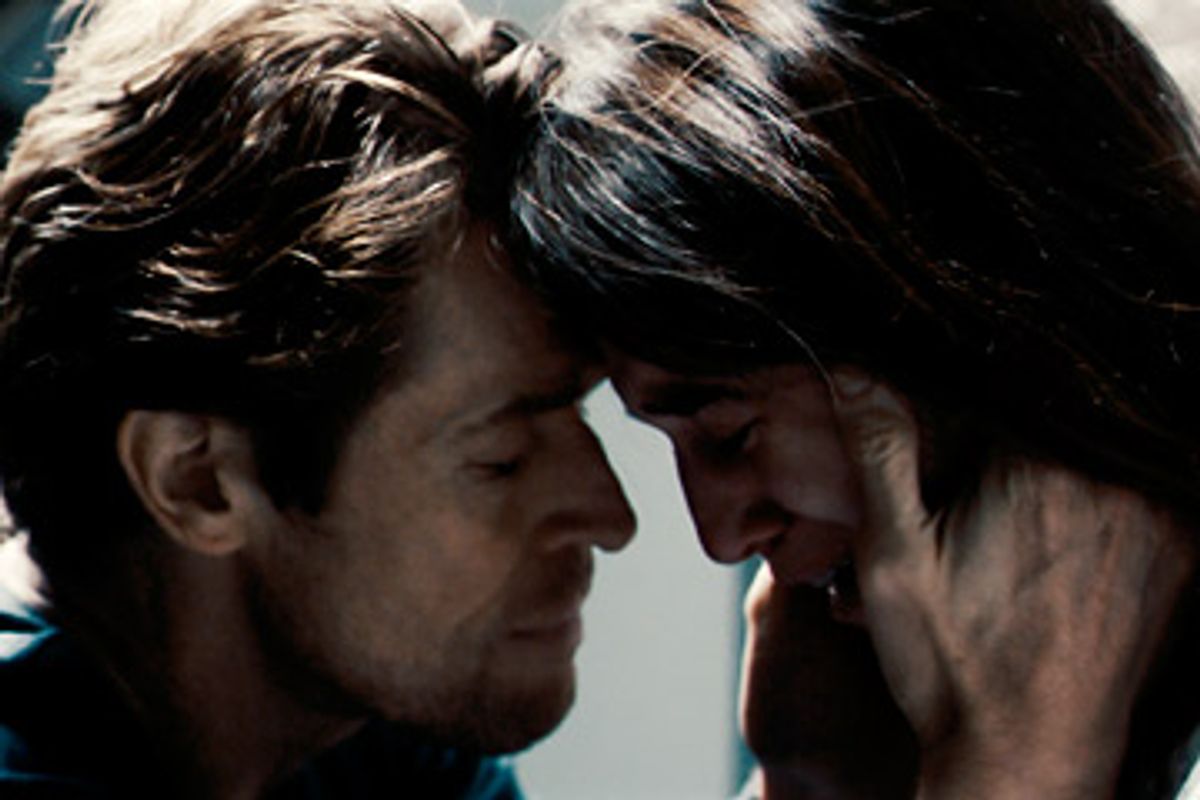 Ah, Cannes! After a rainy weekend, the sun came out over the Boulevard de la Croisette. Monday's temperature hit the mid 70s, and all the horrible and beautiful people in town for the film world's biggest event hit the beachfront restaurants and hotel bars.

Or so I gather. The weather report comes from the Internet, the horrible people is an educated guess, and I'm writing not from the Festival de Cannes press room, with its ocean view and its phalanx of alienated, short-shorts-clad baristas staring resentfully into the middle distance, but from central New York state, where the so-called spring feels more like late November and Monday's temperature barely cracked 50. In a season of global economic meltdown and the disintegration of journalism as a viable business model, it seemed the teensiest bit extravagant for Salon to send me to the south of France for two weeks of sleepless movie-watching and partygoing. I mean, yes, it was extravagant in the best of times. More to the point, it seemed foolish for me to try and insist on it this year.

Beyond the widespread grief at my absence, how is Cannes faring? It sounds like an exciting festival so far, economic woes and the absence of a prospective worldwide hit aside. (Actually, the opening film, Pixar's "Up," sounds like damn close to a sure thing, but that's a case where Cannes needed that movie more than the other way around.) I would say that the level of bitching and moaning about the death of cinema, the non-viability of auteurism, etc., etc., is par for the course. (Let's remember that 41 years ago, Cannes was seen as outmoded and unnecessary by the Parisian revolutionaries of '68.) My short answer to the question of whether Cannes will still be relevant to somebody in five years is absolutely yes, but we'll also still be afflicted with the same damn navel-gazing about whether it will be relevant in five more.

Here's the news as I see it, with relevant links to some respected colleagues, comrades, foes and friends:

Lars von Trier's comeback vehicle "Antichrist," starring Willem Dafoe and Charlotte Gainsbourg as a couple who delve into some unsavory sexual and/or sadomasochistic practices after the death of their son, seems like the first scandalous offering, and hence the first real vehicle for buzz, at Cannes this year. It features full-frontal sexual intercourse and an already infamous scene of female genital self-mutilation, along with a scene described by one critic as a "bloody hand job." I don't know what that means, or how it is performed.

Variety blogger Anne Thompson reports that Trier was accosted by a reporter from London's Daily Mail at the post-screening press conference, demanding that he justify himself. "'I cannot justify myself,' said Trier. 'Because I make films and enjoyed it very much ... I feel that you are all my guests, it's not the other way around ... I work for myself, and I do this little film that I am now kind of fond of. I don't owe anybody an explanation.'"

How's the movie? Thompson describes it as "powerful filmmaking," comparing it to Ken Russell's hallucinatory "The Devils," and adding that Trier may have psychological problems, but hasn't lost his directorial chops. Elizabeth Renzetti of the Toronto Globe and Mail also seemed to like it, or at least be wowed by it, writing that "Antichrist" is "loaded with a big trunkful of crazy... Ingmar Bergman meets 'Saw,' let's say."

Lisa Schwarzbaum of Entertainment Weekly goes in an analytical, no-comment direction, suggesting she isn't sure what to make of it. "So it's one good-looking, publicity-grabbing provocation, with an overlay of pseudo-Christian allegory thrown in to deflect a reasonable person's accusations of misogyny," she writes. Roger Ebert engages in a burst of semi-sympathetic lyricism, declaiming, "Whether this is a bad, good or great film is entirely beside the point. It is an audacious spit in the eye of society ... Von Trier is not so much making a film about violence as making a film to inflict violence upon us, perhaps as a salutary experience."

For Hollywood Elsewhere blogger Jeff Wells, on the other hand, "Antichrist" counts as "easily one of the biggest debacles in Cannes Film Festival history and the complete meltdown of a major film artist," while Variety's Todd McCarthy sums it up as "a big fat art-film fart."

There are longer and more thoughtful pieces by Peter Brunette in the Hollywood Reporter and Jonathan Romney in Screen. Both are generally positive and well worth reading in toto. The net effect is that this is the first film of Cannes '09 that I really wish I had seen myself, although it sounds by far the hardest one to sit through.

Other semi-major premieres over opening weekend have sparked debate, but nothing close to that degree of controversy. Ang Lee's "Taking Woodstock," a backstage story set at that iconic music festival, has been met with a collective shrug. Alison Willmore at IFC.com dubs it a "middling, conventional" comedy filled with narrative mistakes, while McCarthy says it's a "let's-put-on-a-show summer-camp lark ... too raggedy and laid-back for its own good." Anne Thompson seemed to like it, mostly because it conjured up wistful memories of her near-miss non-attendance of the legendary event.

Everybody has seemed to enjoy onetime Palme d'Or winner Ken Loach's comedy "Looking for Eric," which co-stars '90s soccer god Eric Cantona (a former star for Manchester United). Derek Elley of Variety dubs it "a curious hybrid: Three movies -- boilerplate, socially aware Loach; personal fantasy; romantic comedy -- wrap around a central core of a hopeless soccer fanatic who's given a second chance to sort out his life." Similarly, Dave Calhoun of Time Out London sees it as "a tender comedy about modern male alienation and disappointment that sprinkles a little fantasy -- and not a few laughs -- into the harsh real world that Loach has been exploring over the past five decades."

I'm not sure anybody's still waiting for a big comeback from Francis Coppola, perennial winner of the Wim Wenders Memorial What-the-Hell-Happened-to-This-Guy? award, but "Tetro," which Coppola wrote himself (his first screenplay since "The Conversation" in 1974), has failed to provoke much excitement. Shot in black-and-white in Buenos Aires, the movie reportedly looks great, but Variety's McCarthy calls it "a passably talented imitation of O'Neill, Williams, Miller and Inge." At IndieWIRE, Kohn damns with faint praise: "If a first-time filmmaker had directed this stylish black-and-white-and-sometimes-color melodrama, it might gain some notice for suggesting great things to come." On the other hand, Patrick McGavin at Stop Smiling writes that "'Tetro' pulses with a manic energy and over the top garishness that makes the movie alternately disturbing, demented and compulsively watchable."

Speaking of long-hibernating art-film directors, reticent New Zealander Jane Campion is finally back in action at Cannes with "Bright Star," a lush period piece (surprise, surprise) which stars English pretty boy Ben Whishaw as doomed pretty-boy poet John Keats. Peter Bradshaw of the Guardian sees it as a likely Palme d'Or winner: "Campion brings to this story an unfashionable, unapologetic reverence for romance and romantic love, and she responds to Keats's life and work with intelligence and grace." Jeff Wells, however, describes it as "basically a Masterpiece Theatre thing that my mother will love," and GQ's Tom Carson found it fatally boring, quipping that one might be tempted to clap when Whishaw's Keats began spitting up fake blood, as "a welcome reminder that eventually the credits will roll and life -- yours, not his -- will go on."

For fans of Asian genre films, nothing at Cannes had the pre-fest buzz cranked as high as "Thirst," the crazy-sounding vampire film from Korean master Park Chan-wook (of the "Vengeance" trilogy), but that too has gotten a mixed response. Derek Elley calls it "Emile Zola meets New Age vampirism," and I only know what he means because he goes on to explain that the plot is partly borrowed from Zola's "Thérèse Raquin." Getting off one of the festival's best lines to date, Mike D'Angelo of the AV Club writes that "'Thirst' moves like it's just remembered the parking meter is about to expire 10 blocks away and can't find anything but flip-flops to wear. New settings and characters are introduced so willy-nilly, and consecutive scenes have so little formal or tonal consistency, that you're generally floundering even as you're gasping." My friend and sometime Sundance roommate McGavin was more generous, and made me want to see it: "The mise-en-scène, editing, rhythm and camera movements are beautifully designed and choreographed, creating a baroque mélange of the perverse. At 135 minutes, the film is too long, and in need of more pop and a quicker pulse in the second half. It's a horror movie that never really frightens, but instead reaches for a poetic fatalism."

As usual, this sounds like a Cannes rich in foreign films most Americans will never even hear about, and during the months ahead deviants and devotees like you and me will get our crack at most of them. Several of the festival's biggest premieres still lie ahead, including Quentin Tarantino's "Inglourious Basterds" and Terry Gilliam's "The Imaginarium of Doctor Parnassus," which features Heath Ledger's final screen performance. Word on both -- from those who've seen them in the Cannes market and are supposed to remain mum -- is strong so far, and I hear that contrary to rumor Ledger makes far more than a token appearance in the Gilliam film.