After two seasons of elite sex and scheming, the classmates finally graduated. Is there life after high school? 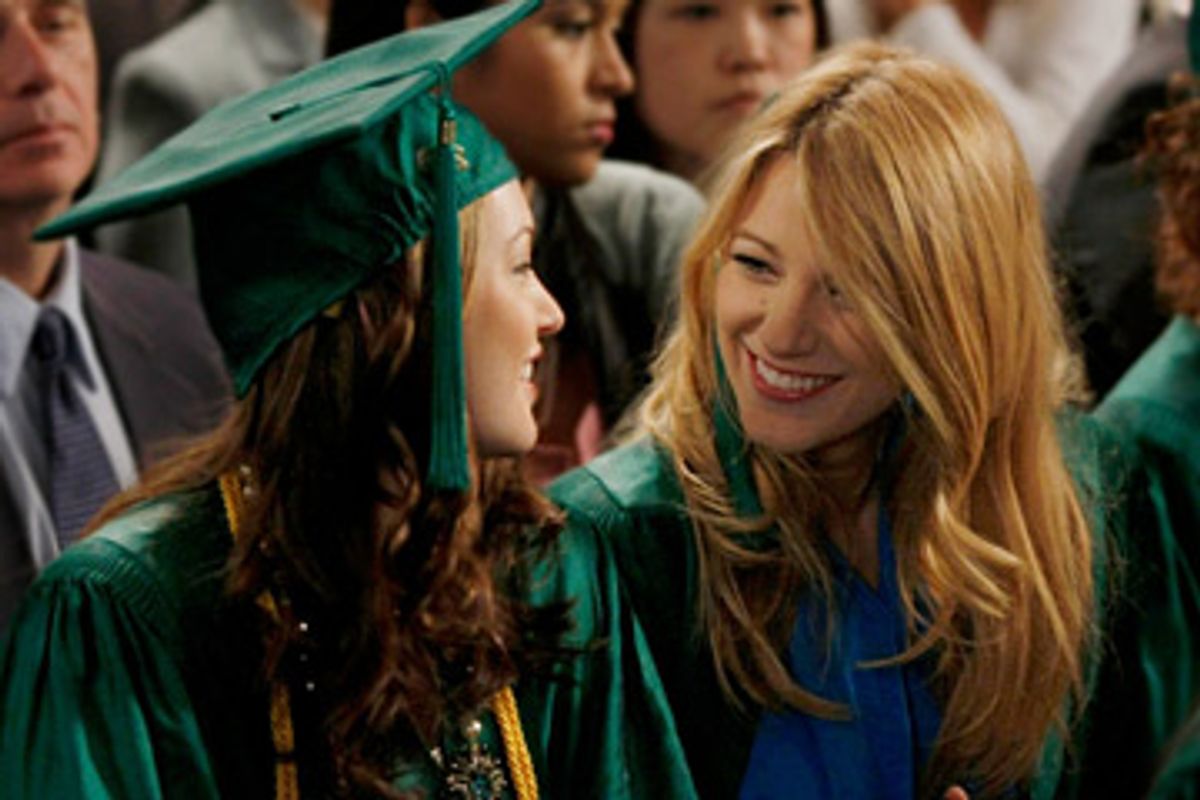 Last night marked the end of an era for "Gossip Girl." Yes, after two seasons of school uniforms, lunchtime-seating confrontations and expulsion plotlines, the CW soap opera's characters finally graduated from high school. Serena, Chuck, Blair, Nate and Dan all said goodbye to their elite, Upper East Side school as they prepared to depart for Columbia, Brown or, in most cases, NYU. But unfortunately, as with any real-life graduation, the result was more muddled and chaste than hoped for -- and considerably less satisfying.

It's unfortunate because "Gossip Girl" has been struggling to keep momentum in its second season and could have used an explosive finale to pick up some steam. A large part of the year was spent with ridiculous storylines (Chuck Bass fighting for control of his deceased father's company), tedious love triangles (Chuck, Nate and Blair), lackluster supporting characters (Poppy, a villain whose most interesting feature was a bob haircut) and parental lameness (Rufus Humphrey and Lily Bass' on-again, off-again relationship).

The show, however, finally seemed to be getting somewhat back on track in the last few episodes of the season, with a Ponzi scheme plotline in which Serena van der Woodsen's (Blake Lively) frat-faced boyfriend ran off with a good chunk of the Upper East Side's money. More promisingly, writers had engineered the return of the sadistic Georgina Sparks (Michelle Trachtenberg), the most memorable character from the show's first season.

These developments promised a climactic, Georgina-themed finale, but alas, most of the show's recent plotlines -- and Georgina herself -- were almost completely absent. Instead, the episode centered around various graduation parties (it's one of the show's most conspicuous tropes that every episode climaxes with a party of some sort -- whether a "Snowflake" Ball, a family reunion or a co-op board meeting) and focused on the potential unmasking of Gossip Girl herself.

The episode kicked off when the school's graduation ceremony was interrupted by a catty class-wide text message from the show's titular gossip blogger -- in which she denounced, among other people, Nate as a "class whore," Dan as an "insider" and Serena as "officially irrelevant." Despite the far nastier things Gossip Girl has written in the past two seasons, this, apparently, was enough to prompt Serena and her friends to hatch a plot to unmask its source. Their plan: Call Gossip Girl's phone number at their post-ceremony mixer and listen for a ringtone.

When the phone of Jonathan, Serena's brother's boyfriend, went off, it seemed, for a moment, like the show might actually go through with the bold move of giving away one of its central mysteries -- but that didn't last long. As it turns out, Jonathan had merely hacked into Gossip Girl's server, and had her text messages forwarded to his phone in his own anti-blogger plot. Ok. Whoops. Anyway. On to the next party!

The climactic social event of the season turned out to be Nate Archibald's post-graduation blowout -- decorated like a ritzy Cylon Basestar from "Battlestar Galactica." As the graduating class bobbed awkwardly to the Yeah Yeah Yeahs, Blair long-awaited seduction of Chuck took place in a side room with a question-and-answer striptease. (She asked how he liked her dress. "I worship it," he creepily answered). At this point, the stale Blair-Chuck will-he-tell-her-he-loves-her plotline had been going on for so long that it nearly ruined the show's two best regular characters. Never mind that it's never a good idea when a show allows its most dynamic characters to couple-up -- it was time to get it over with.

But just as the two were about to get it on, they were interrupted by another mass text message from Gossip Girl: The blogger had decided to air all of her dirty laundry from the past season -- including Blair's affair with Chuck's uncle, and Chuck's night with the "dregs of DUMBO," Vanessa -- all in one go. Disgusted with each other, Blair and Chuck canceled their hookup, and the never-ending plotline continued.

As the finale moved toward its climax, Serena arranged a meeting with Gossip Girl at an empty bar -- in a final attempt to settle the score -- but as the night ended, instead of the blogger, it was her classmates who filed in one by one. They'd been brought in by Gossip Girl via text message to learn an important lesson: "You wanted to meet Gossip Girl," she texted once they assembled, "well look around. You just did. I'm nothing without you." Reminiscent of when Time announced that it's Person of the Year for 2006 was "You," this was, it has to be said, a bit of a letdown.

As the finale came to a close, it rushed to tie up some of the season's loose plotlines -- mostly for the worse. Lily and Rufus finally got engaged. Nate gave up his summer internship at the mayor's office to go backpacking with Vanessa. Blair anointed Jenny Humphrey as next year's class "Queen Bee." In the season's biggest cop-out, Georgina returned the Upper East Siders' stolen money without anything in the way of explanation. And finally, Chuck admitted to Blair that he loved her, and the two embraced on the steps of the Plaza Hotel. Let's hope that's over with.

The last moments of the show, however, also provided some optimism for a reinvigorated third season. Rufus and Lily's lost love-child, Scott, happened upon Dan at an NYU coffee shop, and looks to be a character in the fall. In a new plotline, Serena departed for Fiji to track down her long-lost father (who I, for one, had no idea was lost). But most significantly, Georgina schemed to become Blair's roommate next year at NYU.

After this lackluster run, and given the upcoming move to a college setting, the show needs a return to the strong characters and over-the-top nastiness of the first season if it wants to survive past next year and avoid becoming a soapier version of "Felicity." Michelle Trachtenberg, here's looking at you.