"The corner has been turned" for the GOP?

Michael Steele says the Republican Party is back in business. 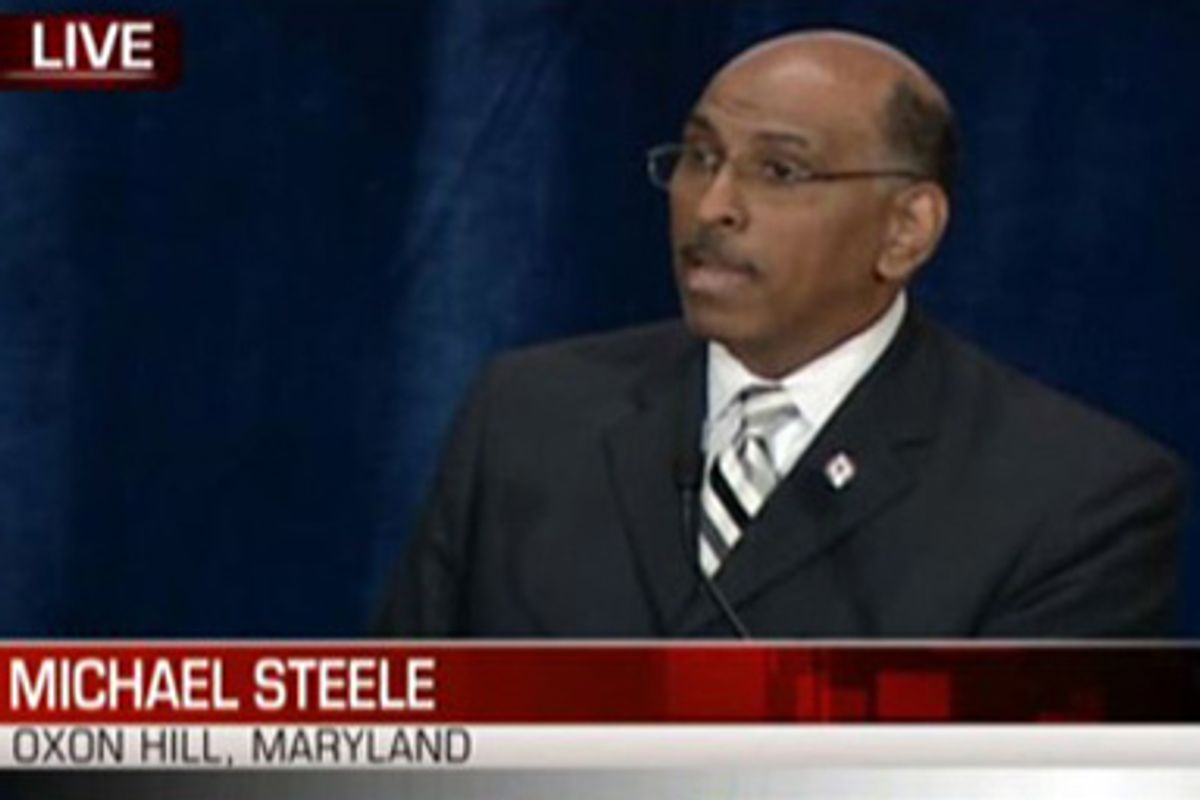 WASHINGTON -- There were two big announcements this afternoon at National Harbor, a sterile-feeling new convention center/hotel development just outside the capital. One was on the news that Disney plans to build a resort there. The other was Republican National Committee chairman Michael Steele's declaration that the GOP is back, and better than ever before.

Steele's speech, to a collection of state GOP chairmen and other party functionaries, wasn't exactly a production up to Walt Disney's standards of entertainment. He walked into a half-filled hotel ballroom to a roaring ovation, and then spent the next 30 minutes in danger of putting the RNC members gathered there to sleep as he read the text, without much energy, from the podium in front of him. (Though the martini glasses littering the tables -- which were apparently used to serve dessert -- made it look like the whole room was drunk, rather than bored.) His laugh lines fell mostly flat; his applause lines drew dutiful, not enthusiastic, responses. But he did spin a lovely story out for his fellow Republicans, one that told of a party poised for a comeback. Too bad the polls show that's mostly a fairy tale.

"Republicans are rising once again with the energy, the focus and the determination to turn our timeless principles into new solutions for the future," Steele said. "The introspection, ladies and gentlemen, is now over. The corner has been turned." But the speech didn't actually go into what those new solutions might be. Steele spent paragraph after paragraph griping about the Obama administration's policies, without mentioning so much as one new plan. (Democrats cheerfully sent reporters a YouTube clip of former GOP Rep. Chris Shays telling MSNBC, "I didn't hear any new ideas.")

The generally optimistic tone of the speech was understandable, though: Steele needed to persuade the GOP establishment that's he's up to the job. On Wednesday, the members will vote on whether to take away his power over the party's budget. Steele says he'll quit if that happens. The speech, Republican insiders said, seemed like an effort to demonstrate things were back on track (though one consultant summed its subject up, derisively, as "Me me me me"). "I did not support Michael Steele in the early ballots at the RNC, but I'm a solid supporter now," said Colorado GOP chairman Dick Wadhams. Republicans are splitting into two camps about Steele -- some who think his message and P.R. missteps are hurting the party, others who are willing to let that stuff slide because he's reorganized the internal hierarchy at the RNC. Steele's job today was to try to win over the skeptics.

Still, the speech came with a few contradictions. "Today we are declaring an end to the era of Republicans looking backward," Steele told the GOP. Meanwhile, outside the ballroom, a lovingly crafted display of memorabilia from the party's 2004 convention sat at the registration table, complete with souvenir flip-flops used to mock John Kerry, credentials for access to Madison Square Garden and "Bush/Cheney" stickers. (Presumably, it wasn't the '04 campaign -- or any Republicans who emerged from it victorious -- that Steele had in mind when he said that the "era of apologizing for Republican mistakes of the past is now officially over.") And Steele ended the speech with a long paean to the glories of Republicans past. "For me the Republican Party owes its moorings to Edmund Burke, William F. Buckley and Ronald Reagan," he said. "In the best spirit of President Reagan, it's time to saddle up and ride." At another point, Steele seemed to say Republicans didn't care if they won or lost elections: "We have only one goal, and it's not power. It's not majorities. It's the success of our country."

Being Steele, he also, naturally, tried to bring some of his "off the hook" ways to the speech. "The president is personally popular. Pity the poor fool who paid money to get that poll." He gave a shout-out to the tea parties that conservatives have decided will rescue the GOP: "A change has indeed come to America. But it's not the one the Obama administration wants aired on the nightly news," Steele said. "This change, my friends, is being delivered in a tea bag, and that's a wonderful thing." (Any punch line is strictly optional.)

But the meat of the speech was the Obama-bashing, which seemed aimed at the GOP base. "The last Democratic president, who declared that the era of big government was over, was Bill Clinton," Steele said. "Someone should send a memo to Barack Obama, because this new Democratic president has ushered in a new era of left wing, old school, top-down, Industrial Age, bureaucratic, big government, the likes of which we've never seen." He accused Obama of "destroying the rich," encouraging "class hatred" and generally "taking us in the wrong direction and bankrupting our country."

The real business of the RNC meeting will come Wednesday, though. Members will vote on whether to restrict Steele's budgetary power. But they'll also vote on a resolution -- which many observers expect to pass -- calling on Democrats to change the name of their party to "the Democrat Socialist Party." "Our renaissance has begun," Steele said today. And with new ideas like that one, could you argue with him?