The curious case of Edmund Andrews, who covered the mortgage meltdown as a journalist, while living it as a deadbeat. 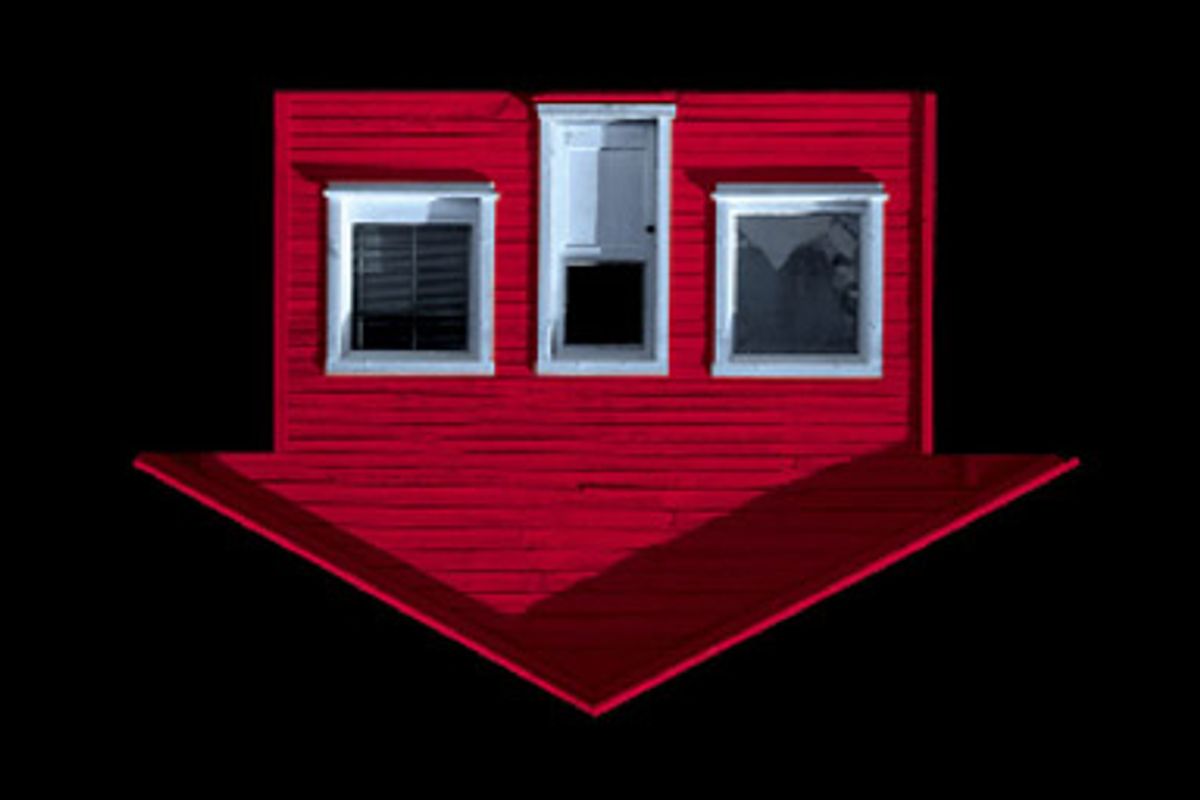 Oh, to have been a fly on the wall when the agent representing Edmund L. Andrews, author of "Busted: Life Inside the Great Mortgage Meltdown,"

first made his pitch to the publishing house W.W. Norton.

AGENT: It's a story of a man with money problems, a marriage in trouble, and about to face foreclosure on his home ...

PUBLISHER: So? You just described 10 million loser guys in this country. What makes his story any different?

AGENT: Well, get this: He's one of the top economics reporters in the country. He talks regularly to the likes of Alan Greenspan and has spent several years covering the mortgage crisis and the credit crunch! But somehow he took out three sketchy mortgages in four years, and as of February was four months behind on his house payments! This guy isn't just any loser. He's a gold-plated, byline-regularly-appearing-on-the-front-page-of-the-New-York-Times loser!

PUBLISHER (hastily scrambling to find a contract): I do believe we can do business, sir! Perhaps as a token of our interest we can help  Mr. Andrews defray the cost of the  outstanding remainder on his mortgage? Ever since the online publication, last Wednesday, of an excerpt from "Busted" in the Sunday New York Times Magazine, there's been a slightly dazed tone to the econoblogosphere's ruminations about Andrews' plight. We've all been reading Edmund Andrews for years. He's a damn good reporter; his articles about the unfolding financial crisis have provided grist for endless discussion and analysis. To learn that the same guy who wrote, for example, in December 2007 about the late Federal Reserve governor Edward Gramlich's unheeded warnings to Alan Greenspan about subprime mortgages was himself caught up in a subprime mortgage mess is a bit queasy making. How could someone who knew so much about what was going on make such bad decisions?

Or, as the author puts the question himself: "How could a person who wrote about economics for a living fall into the kind of credit card trap that consumer groups had warned about for years?"

Because bad decisions, he did make. Hoo boy. Andrews does not stint on the details -- the huge credit card bills, the decision to buy a house and get remarried while still paying hefty alimony bills, the inability to make income and expenses match up. He willingly signed his name on the dotted line of mortgages that made no rational economic sense. And he fully owns up to it. Most Americans do not like to talk about their private finances, but Andrews is fearless. Anyone who has ever fought about money problems with his or her partner will wince at the unflattering portrayal Andrews delivers of his own "first-class prick"-ness. It is not a pretty sight.

"We can't keep racking up debt like this," I told her one night, annoyed that she didn't appear to share my urgency. "Even with your job, we're spending way more than we make every month. If we keep this up, we'll lose the house."

"Aaach, there you go again," Patty snapped. "Why is it that every time you look at a bill you act as if the world were coming to an end? I am doing what I can to make money, and to spend as little as possible. I know better than anyone that we have money problems, but it is not the end of the world. You act as if I'm not taking this seriously unless I get as hysterical as you."

"What the fuck are you talking about? I exploded. "Maybe you don't understand, but this is a simple question of math. We're running deeper into debt every month. It's not as though I'm crazy or that I'm imagining all this."

I'm sorry -- but I'm never going to be able to read another Edmund Andrews-bylined story without thinking of him screaming expletives at his wife, or seething in anger at his own circumstances while covering a White House press conference on housing sector reform.

But strangely, what makes this book work is that while "Busted" is on the one hand a classic trashy Americana let-it-all-hang-out mea culpa worthy of Dr. Phil it is also a cogent analysis of how the mortgage lending market got out of control and submarined the U.S. economy. If you come to "Busted" angry at the losers who took out mortgages they couldn't afford, you will not find your rage assuaged by Andrews' self-flagellation. You will want to slap him silly, and if you have been reading him for a long time, you might even feel a little betrayed. But if you are looking for one of the clearest explanations of how, for example, bad mortgages were packaged into securities that supposedly transformed risk into Triple A safety, "Busted" delivers. Chapter by chapter, I found myself alternating between amazement at how a guy at the top of my profession could be such an irresponsible doofus, and grudging admiration at how well he was telling a story that I have been following minute-by-minute, blog-post-by-blog-post, for the last three years.

Ultimately, the true litmus test for how readers will react to "Busted" will be their willingness to agree or disagree with Andrews' opening manifesto: "No matter how egregious my judgment may have been, it pales in comparison with the self-enriching recklessness of those at the top of the financial ladder."

I happen to agree with that statement. Through his reporting, Andrews definitively makes the case that Wall Street's insatiable hunger for mortgages of any quality -- in fact, the worse the better! -- that could be bundled up into securities and then resold, provided the critical incentive encouraging the subprime mortgage sector to explode to such huge dimensions. As individuals, we do not deserve all the blame for living beyond our means -- we were encouraged to do so and seduced into doing so by a host of characters, from Alan Greenspan to the biggest Wall Street bankers to the incorrigible telemarketers who never stopped calling.

The most astonishing thing about "Busted" is how, in the person of Edmund Andrews, we see both the irresponsibility and the critical analysis wrapped up in one. No one knew better the perils of a debt-financed lifestyle than an economics reporter covering the credit crunch. And yet he too succumbed to the vortex.

Will Edmund and Patty escape? Will their marriage survive? Will he keep his house? At the end of "Busted" we don't have any final answers to these questions. But given the lack of certainty we feel about the economic future in general, the lack of closure feels just about right. Though I'm sure the advance on "Busted" -- a topic on which Andrews is strangely silent, given his blunt forthcomingness about all other aspects of his personal finances -- must have helped.