American politicians hate to confront Israel. But here's why Obama will. 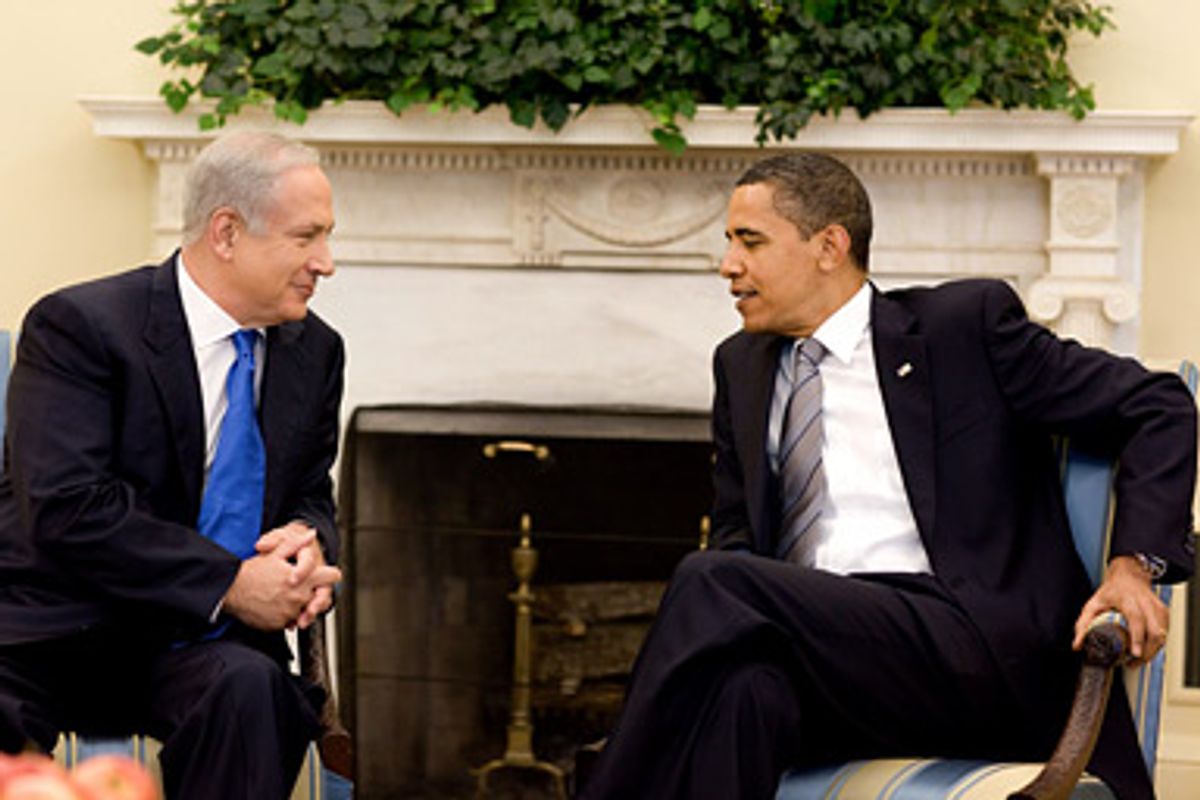 Monday's meeting between U.S. President Barack Obama and Israeli Prime Minister Benjamin Netanyahu made obvious what everyone already knew: There is a vast and unbridgeable gap between the two leaders' positions. Netanyahu refuses to accept the idea of a Palestinian state, the sine qua non of any Mideast peace plan. He also believes, apparently sincerely, that Iran is a psychotically anti-Semitic state willing to commit national suicide to kill Jews. Driven by his perceived need to avert a second Holocaust, Netanyahu could decide to launch an unprovoked attack on Iran, even if the U.S. tells him not to.

There is zero convergence between Netanyahu's ideas and Obama's. Unbeholden to the extreme "pro-Israel" neoconservative ideology that warped the Bush administration's policies in the region, Obama realizes that brokering a two-state resolution of the Israeli-Palestinian conflict is essential for America's interests. Nor does he buy Netanyahu's shrill claims that an Iran with nuclear arms would be willing to commit national suicide by attacking Israel. He sees that accepting Netanyahu's demand that the U.S. either attack Iran itself or allow Israel to attack it would be an act of supreme folly, one that would have catastrophic consequences for the U.S., the region and the world. All the hoopla over Obama's statement Monday about an end-of-year "deadline" for negotiations with Iran is meaningless because the U.S. would never sign off on an attack on that country.

Forget the diplomatic niceties both men uttered after their meeting. The stage is set for a head-on collision between Obama and Netanyahu. For the first time since 1991, when President George H.W. Bush dared to stand up to far-right Israeli Prime Minister Yitzhak Shamir, making U.S. loan guarantees conditional on Israel's stopping illegal settlement building in the occupied territories, there could be a major rift between the U.S. and Israel.

There is ample reason for skepticism about whether Obama will really dare to stand up to Netanyahu. American politicians have about as much appetite for confrontation with Israel as they do for supporting world communism. The U.S. Congress invariably, and almost unanimously, votes well to the right even of the White House on anything Israel-related, depriving presidents of political cover. (This was even true during George W. Bush's presidency, the most egregiously "pro-Israel" one in U.S. history.) As for Obama himself, he has not exactly proved to be the transformative foreign-policy president his liberal supporters hoped he would be. On issue after issue, from Guantánamo to military tribunals to Afghanistan to habeas corpus to state secrets, Obama has embraced what we might call a kinder, gentler version of Bush's far-right policies. On issues related to Israel, Obama has toed the conventional line, genuflecting before AIPAC and refusing to condemn Israel's onslaught against Gaza. When the Israel lobby flexed its muscles to sink the appointment of Charles Freeman, Obama did not fight it. He is an extremely cautious, centrist politician, conflict averse by inclination, with an ambitious domestic agenda that he does not want to endanger. So there are good reasons to question whether he will really be willing to grab the third rail of American politics.

But despite his caution and his so-far uninspiring track record on the Middle East, there are two compelling reasons why Obama should stand up to Netanyahu, and probably will. As a foreign-policy realist, unswayed by irrational ideological attachments, he understands the vital necessity of brokering an Israeli-Palestinian peace. And he knows that the domestic political winds have shifted enough that he can get away with confronting an Israel increasingly perceived as intransigent, addicted to force and on the wrong side of history.

Resolving the Israeli-Palestinian crisis has always been the key to America's strategic interests in the Middle East and the broader Muslim world. Unlike Bush, Obama clearly gets that. In fact, the most significant thing he said in his post-meeting press conference came in response to a questioner who noted that Netanyahu has repeatedly said there could be no movement on the Palestinian issue until the Iranian issue was addressed. Obama responded, "If there is a linkage between Iran and the Israeli-Palestinian peace process, I personally believe it actually runs the other way. To the extent that we can make peace with the Palestinians -- between the Palestinians and the Israelis, then I actually think it strengthens our hand in the international community in dealing with a potential Iranian threat."

Moreover, Obama realizes that resolving the Israeli-Palestinian crisis would have positive consequences that go far beyond Iran. The entire region is a dangerous mess, a powder keg ready to explode. He needs to get U.S. troops safely out of Iraq, try to stabilize Afghanistan enough to begin thinking about drawing troops down there, and undermine the Taliban and other radical Islamist groups by winning hearts and minds in Pakistan and elsewhere in the Arab-Muslim world. None of these goals are easy to achieve, but all of them will be facilitated by brokering an Israeli-Palestinian peace.

Confronted with an array of unpleasant problems, leaders usually tackle the one they have the greatest chance of solving. One of the unintended consequences of Bush's misguided "war on terror" may have been to make the legendarily intractable Israeli-Palestinian crisis look comparatively solvable. How ironic it would be if a crusade in large part dreamed up by Likudnik ideologues resulted in the final defeat of the Likud and everything it stands for.

As for the domestic political situation, that too has changed dramatically in the last few years. Right-wing lobbies like AIPAC still wield considerable power, but they are no longer the only game in town. New lobbies like J Street, as well as older organizations like the Israel Policy Forum, wield institutional weight, but more important, they reflect the changing views of American Jews, especially younger ones, on Israel. As the IPF's M.J. Rosenberg told me two years ago, younger Jews no longer buy the apocalyptic fearmongering served up by leaders like Netanyahu. Moreover, American Jews' once-automatic support for Israel has wavered in the wake of the Lebanon and Gaza wars, both of which were widely perceived to be grossly disproportionate and unjust. American Jews' willingness to support a harder U.S. line on Israel tracks with that of Democrats in general: A new poll shows that 71 percent of Obama supporters believe he should "get tough with Israel" to stop the expansion of settlements.

The extreme policies and views of the Netanyahu administration also make it easier for Obama to challenge Israel. Too little has been made of the amazing fact that Netanyahu has refused to accept the idea of a Palestinian state. This is a time-warp colonialist position that puts him at odds not just with the community of nations but with the 20th century. Netanyahu's foreign minister, Avigdor Lieberman, is an explicit racist whose fascist political party, Yisrael Beiteinu, recently proposed that Israeli Arabs should be banned, on the grounds of "national unity," from commemorating the 1948 Naqba, or Catastrophe, when they lost their homes and homeland in the war that led to the establishment of the state of Israel. It's actually much easier for Obama to stand up to extremists and fanatics like Netanyahu and Lieberman than to centrists who pay lip service to a never-ending "peace process."

Finally, there is the diplomatic calendar, and the simple fact of expectations. Obama is about to visit Egypt, where he will make a major speech to the Muslim world. If he does not force Israel to take concrete steps toward peace -- stopping all settlements, ending house demolitions in East Jerusalem, opening Gaza to aid -- he will be perceived by the entire region as having caved in to Netanyahu, his presidency and prestige will be greatly weakened, and radicals and rejectionists will be empowered. Under normal circumstances -- if the U.S. was not embroiled in two Mideast wars, if the Israel lobby was at full strength -- a U.S. president might decide it was wiser to cave in anyway. But these are not normal circumstances. Obama knows that he has much more to lose from following the status quo than challenging it.

Which means that a showdown is looming. And for an America desperate to pull its Middle East irons out of the fire and restore its standing in the region, an Israel that needs to be saved from its atavistic and colonialist instincts, and above all for a Palestinian people who have been unjustly kept stateless for 61 years, it can't come soon enough.