In a fiery speech, the former vice-president defends his administration and attacks President Obama 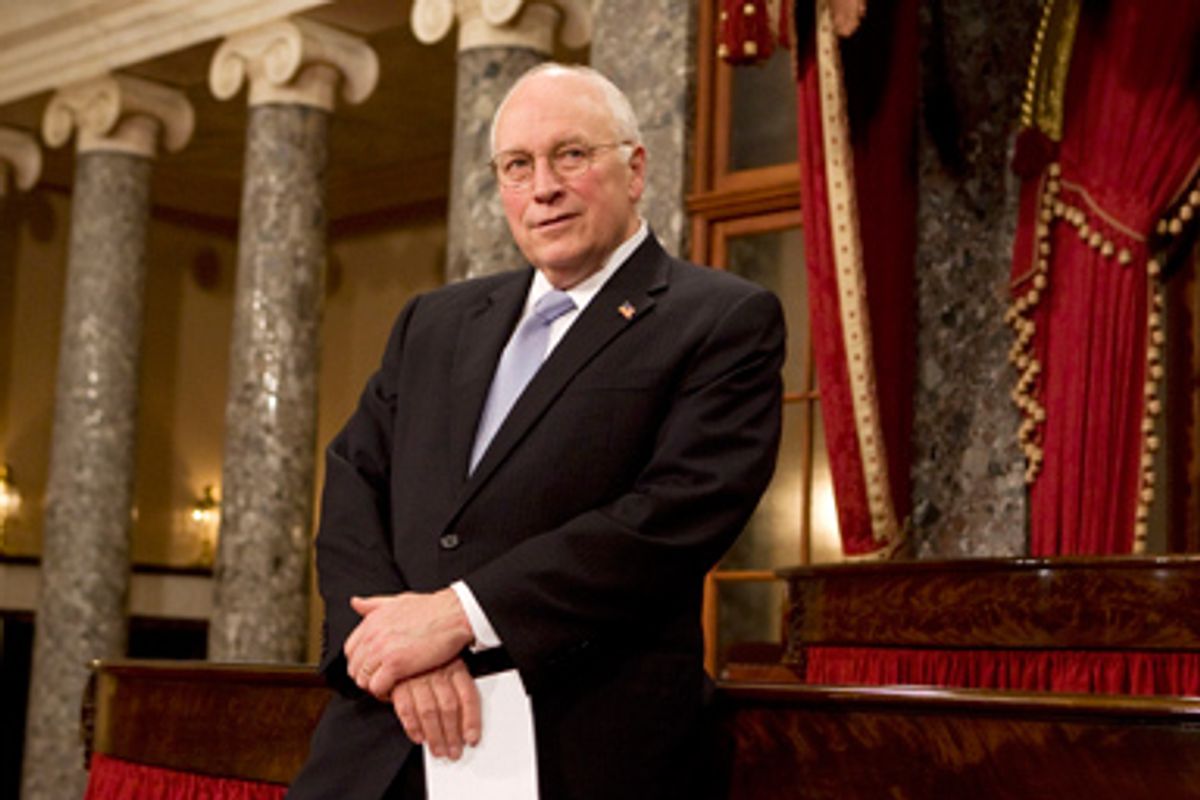 There's a chance that the substance of former Vice President Dick Cheney's speech at the American Enterprise Institute on Thursday could have swayed Americans, could have changed the minds of some of those who've come to trust President Obama on national security issues. But as is so often the case when Cheney is involved, the messenger -- and his tone -- made that an unlikely prospect.

From the moment he began speaking, following Obama's own talk on national security, Cheney came off as bitter and angry, lashing out against those who challenge what he and the Bush administration generally did during their time in office. Making a joke about how long Obama's speech had run, the former vice-president said, "It's pretty clear the president served in the Senate and not in the House of Representatives, because, of course, in the House, we have the five-minute rule." From there he was on to a quite lengthy address of his own.

Much of the speech would be familiar to anyone who's followed American politics this decade. As a preface to his criticism of Obama, Cheney recounted the 9/11 attacks and his own role that day; he also used that day in suggesting that criticism of the Bush administration has occurred because the memory of those who died has faded in Americans' minds over the years that have passed. And, perhaps tellingly, he discussed the way he was affected by what happened on Sept. 11, 2001, and the way some people believe he was affected.

"In the years since, I've heard occasional speculation that I'm a different man after 9/11," Cheney said. "I wouldn't say that. But I'll freely admit that watching a coordinated, devastating attack on our country from an underground bunker at the White House can affect how you view your responsibilities."

The speech was peppered with caustic attacks -- sometimes direct, sometimes veiled -- on Obama and other opponents of the Bush administration's actions. "For all these exacting efforts to do a hard and necessary job and to do it right, we hear from some quarters nothing but feigned outrage based on a false narrative," Cheney said at one point. "In my long experience in Washington, few matters have inspired so much contrived indignation and phony moralizing as the interrogation methods applied to a few captured terrorists ... people who consistently distort the truth in this way are in no position to lecture anyone about 'values.'"

Later, he said, "The administration has found that it's easy to receive applause in Europe for closing Guantánamo. But it’s tricky to come up with an alternative that will serve the interests of justice and America’s national security."

And in what seemed like his most direct indirect reference to the president, Cheney said, "Critics of our policies are given to lecturing on the theme of being consistent with American values. But no moral value held dear by the American people obliges public servants ever to sacrifice innocent lives to spare a captured terrorist from unpleasant things. And when an entire population is targeted by a terror network, nothing is more consistent with American values than to stop them."

In a press conference last month, Obama had said, "What I've said -- and I will repeat -- is that waterboarding violates our ideals and our values."

Your view of Cheney's speech is likely to vary depending on your personal political views -- certainly, the right is already full of praise for it. But there can be no dispute that it was full of straw men, misleading statements and even outright distortions.

One of those straw men came when Cheney drew what he called "the great dividing line in our current debate over national security."

That's a remarkably narrow view of things: You could, for instance, also conclude -- as many within the U.S. intelligence community have -- that al-Qaida has chosen not to focus its planning on the U.S. for the moment, but has decided instead to go after our European allies, and that it's content waiting to attack again as long as the next time it strikes it is even more successful in killing Americans than it was on 9/11.

Speaking about the Office of Legal Counsel memos regarding interrogation techniques authorized under the Bush adminstration, Cheney said, "Somehow, when the soul-searching was done and the veil was lifted on the policies of the Bush administration, the public was given less than half the truth ... Other memos, laying out specific terrorist plots that were averted, apparently were not even considered for release."

Well, yes -- but that's because the decision to release the specific memos that were made public was a result of specific legal action.