DVDs you should have seen, but didn't: Bu 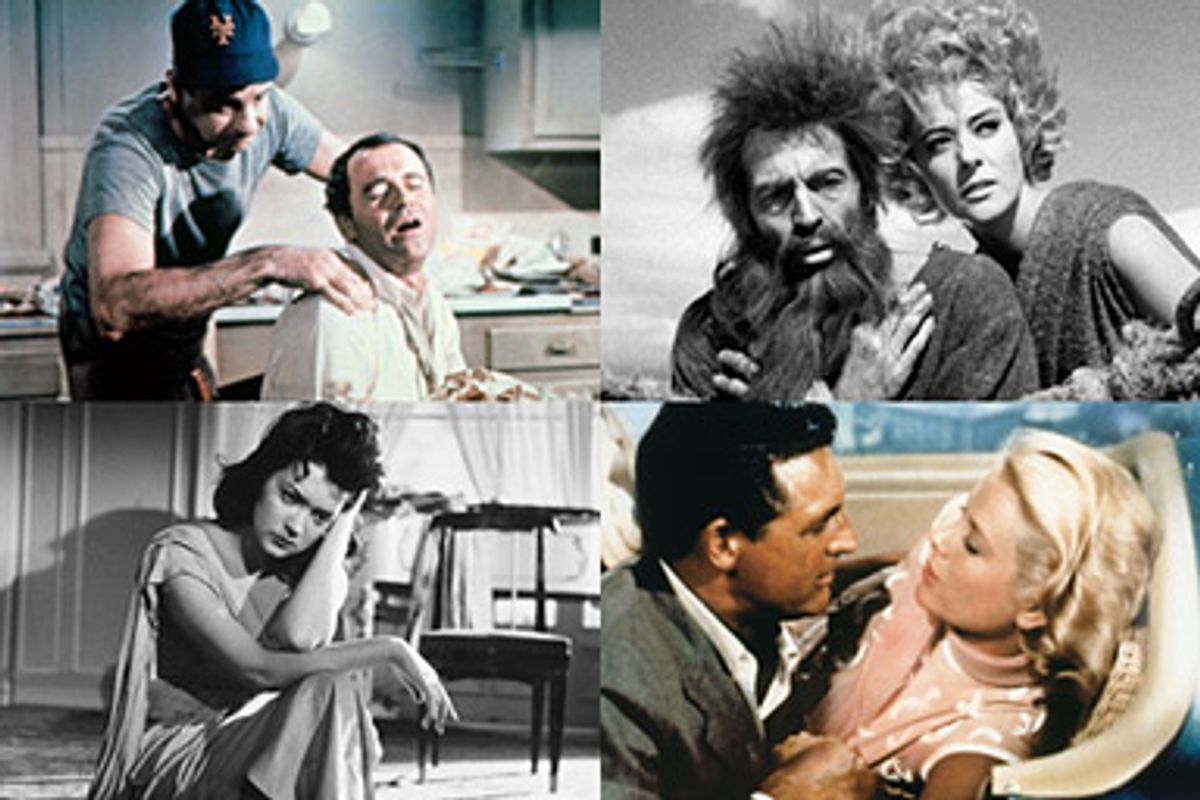 Clockwise, from top left: Images from "The Odd Couple," "Simon of the Desert," "To Catch a Thief," and "The Exterminating Angel."

Nearly paralyzed by a flow of incoming DVDs that has threatened to entomb my family beneath stacks of British cooking shows, Russian action films and Japanese pornography, I haven't even tried to keep up. But duty calls, and as Seijun Suzuki is my witness, I'll never let you go hungry for oddball DVD releases again!

I've got a double dose of slightly-to-somewhat offbeat, more-or-less independent spring releases, some going back many weeks and some brand-new. Here's the first installment, with more to follow within a week or so. Also, parents, aunts 'n' uncles, permanent kidults and other good-natured guardians of our nation's youth: This summer here at Beyond the Multiplex Towers we'll be reviving and revising the Awesome Kids' Video Project for another season, with lots of new entries and expanded parameters -- we're rethinking the capricious ban of Disney products! we're conducting some actual research! -- so get your brainpans and your e-mailin' fingers cranked up.

"The Exterminating Angel" and "Simon of the Desert" Fans of the great Spanish surrealist Luis Buñuel have waited many years for definitive DVD versions of the most important films from his long and strange Mexican exile. Criterion continues to fill in the gaps with these two beautifully restored, feature-packed releases. (The best known work of Buñuel's Mexican period, "Viridiana," got the Criterion treatment in 2006.) A bleak social satire from 1962 that begins as chattering-class melodrama and then descends into apocalyptic allegory when its dinner-party guests (among them Mexican starlet Silvia Pinal) find themselves inexplicably unable to leave the drawing room, "Exterminating Angel" sometimes feels like an unfriendly first draft of Buñuel's masterpiece, "The Discreet Charm of the Bourgeoisie." Its gorgeous black-and-white images are meticulously crafted by cinematographer Gabriel Figueroa, who understood how the director wanted to distort the artificial tone and glossy sheen of Mexican commercial cinema for his own purposes. Extras include "The Last Script: Remembering Luis Buñuel," a 2008 documentary hosted by the director's son, Juan-Luis Buñuel.

At first I was skeptical about Criterion's decision to release the 45-minute "Simon of the Desert" on its own full-price disc, rather than packaging it with "Exterminating Angel." But this 1965 film, whose eponymous hero (Claudio Brook) is an early Christian ascetic who lives atop a pillar to be closer to God, à la St. Simeon Stylites, possesses a stylistic purity, genial good humor and air of mystery that might make it the most perfectly realized of all Buñuel's Mexican works -- if, that is, he had ever finished it. There's much more going on here than a mocking satire of religious faith. If anything, its Marxist, atheist director seems to admire Simon for his unbending devotion to a pointless cause, which is rather similar to that demanded of artists. When production funds ran out, Buñuel ended the film by having the sexy, female Satan (Pinal) transport Simon by airplane to a 20th-century New York nightclub. What does that signify? Asked that question in a 1977 interview, Buñuel responded: "I don't know." The best extra here is a fascinating 1997 docu about Buñuel's muddled Mexican career. "A Grin Without a Cat" We don't have time or space here for an adequate discussion of legendary French essayist/documentarian Chris Marker's 1977 grand manifesto, a three-hour exploration of the revolutionary and counterrevolutionary currents that rocked the world from the late '60s through the mid-'70s. Mostly composed of found footage and found audio, with voice-over by Jim Broadbent, Cyril Cusack, Yves Montand, Simone Signoret and others, "Grin Without a Cat" is a monumental work of collage and a political history of the 20th century's most tumultuous years. Among many other events, Marker covers the latter stages of the Vietnam War, the death of Che Guevara in the Bolivian highlands, the Paris uprising of May 1968, the Soviet intervention in Czechoslovakia and the CIA-sponsored coup against Salvador Allende in Chile.

Although Marker's French title, "Le fond de l'air est rouge," can be roughly translated as "the temperature is red," he is in no way an apologist for Soviet-style communism. He sees the great-powers conflict of the Cold War as an obscenity that twisted the genuine popular-revolutionary potential of the '60s in many evil directions. (The English title may better convey some of that ruefulness.) Perhaps it's possible, after three decades, to remove oneself from the overheated ideology of the period and see "Grin Without a Cat" as an ironic and tragic chronicle that captures many repressed moments of recent history in compelling and immediate fashion. However you want to view it, "Grin" is the ultimate achievement of an utterly unique cinematic figure, and we've been waiting for it a long time. One of the home-video releases of the year, if not the decade. "The Kaiser's Lackey" Teutonophile film buffs are well aware that First Run Features has been releasing lots of interesting movies dredged up from East Germany's DEFA archives, thereby proving that while the GDR may have been a police state, it was far from a social-realist monoculture. But for sheer cinematic serendipity, none of them quite matches this daring and startling 1951 adaptation of Heinrich Mann's novel "Der Untertan," a title that lacks a precise English equivalent. ("The Social Climber" or "The Arriviste" come close.) Director Wolfgang Staudte turns Mann's tale of a soulless 19th-century bootlicker into a razor-sharp parable about the rise of fascism and the authoritarian tendency in German culture, and lead actor Werner Peters has the pompous mannerisms and screeching, strident tones of a certain Austrian corporal whom German audiences of the '50s remembered all too well. Although it looks like a fusty black-and-white period piece at first, the sly style and dark wit of "Kaiser's Lackey" cut close to the bone; it may be the only German film of the period to have displeased officials on both sides of the Berlin Wall. Don't miss this! A short explanatory doc is included; geeky but informative. "Treasures IV: American Avant-Garde Film, 1947-1986" Even the staunchest of art-house buffs can feel perplexed and intimidated by the marginal alternate universe of avant-garde or experimental films, which are often closer to the art world than to commercial film. That's why a set like this one (fourth in a series of reissues from the National Film Preservation Foundation) is such a boon. As Martin Scorsese writes in an accompanying foreword, the American avant-garde comprises "an entirely different set of possibilities, another world of images and sound" from the one found in mainstream narrative movies. This outstanding collection offers immediate access to that other world, and no advanced or theoretical study is required. Moving from Harry Smith's dazzling color-and-light experiment "Film No. 3: Interwoven" (1949) -- my kids loved it! -- to Chick Strand's mini-documentary "Fake Fruit Factory" (1986), "Treasures IV" includes many of the central works and tendencies of American experimental film, from famous shorts by Stan Brakhage, Ken Jacobs, Marie Menken and Andy Warhol (drag queen Mario Montez fellating a banana) to such lesser-known essentials as Jane Conger Belson Shimane's "beat collage" film "Odds & Ends" (1959), Storm De Hirsch's psychedelic "Peyote Queen" (1965), reclusive artist Joseph Cornell's undated found-footage experiment "By Night With Torch and Spear" and Larry Gottheim's "Fog Line" (1970), an unbroken, 11-minute landscape study. Absolutely, positively a must-have, even if you think you don't want it. "L'Innocente" and "Ludwig" Sometimes in idle moments I wonder why, of all the once-considered-great directors of the 1960s and '70s, Luchino Visconti has disappeared from the pantheon so thoroughly. Then I watch one of his movies again and think: Oh. It isn't that Visconti's films aren't impressive or rewarding experiences; the best of them hold up pretty well. But the opulent, operatic, upper-middlebrow melodramas on which he made his reputation, layered with Gucci gowns, Vuitton bags and Bulgari jewels, are diametrically opposed to the current temperament of European art cinema, in which spectacle has become ideologically suspect. Visconti was a man of abundant and fruitful contradictions: Born into one of northern Italy's richest families (if you go by title, he was Don Luchino, Count of Modrone), he became both openly gay and a communist; although considered the father of neorealist cinema, he is best remembered today for lavish portraits of upper-class life.

If Visconti's movies are an acquired taste, they're strongly addictive once you get started. Arguably neophytes should begin with acknowledged classics like "Death in Venice," "The Damned" and "The Leopard," but Koch Lorber's new release of "L'Innocente," an erotic infidelity drama based on the novel by Visconti's old friend Gabriele d'Annunzio, is both delectable and highly accessible. Giancarlo Giannini plays the tormented aristocrat torn between his secretive wife (Laura Antonelli) and dark-eyed mistress (Jennifer O'Neill, dubbed into Italian). Made in 1976, "L'Innocente" was Visconti's last film, and perhaps seemed overly old-fashioned even at the time. But it's one of his loveliest and most coherent pictures, both hard-hearted and romantic, and well worth a reappraisal. As for Visconti's 1972 "Ludwig" -- inevitably to be confused with Hans-Jürgen Syberberg's film of the same name, same subject and similar obsessiveness (which is also forthcoming on DVD) -- there isn't much I can say that hasn't been said. It's a completely insane movie, one of the most indulgent follies ever committed to celluloid. It's four hours long, and full of lulls, drags and reiterations, but once you surrender to it completely, Visconti takes you on a prodigiously evocative voyage into the world of mad King Ludwig II of Bavaria (played with a combination of languor and intensity by Helmut Berger, the director's longtime partner). Its gloomy, amazing 19th-century decor is peopled by an international cast (dubbed into Italian, of course), including Romy Schneider as Empress Elisabeth, Trevor Howard as Richard Wagner and Silvana Mangano as Cosima von Bülow. A tremendous experience, but you have been warned.

Bonus pick: "The Odd Couple" and "To Catch a Thief" In a vain effort to prove that I sometimes watch movies other people have heard of, consider the sixth and seventh installments of Paramount's Centennial Collection, a series of high-def, feature-rich, double-disc remasterings that so far is devoid of duds. No serious Hitchcockian would consider the 1955 "To Catch a Thief" among the fat man's best, but I guess I'm not a serious Hitchcockian. To me, this stylish, scenic French Riviera romp, featuring Cary Grant as a semi-retired jewel thief and Grace Kelly as a vacationing heiress, is precisely the sort of Hollywood genre vehicle Hitch handled best, with the added bonus that it swaddled his queasy-making misogyny in many layers of artifice. As for director Gene Saks' original 1967 screen version of Neil Simon's "The Odd Couple," with Jack Lemmon and Walter Matthau in the roles later hammered into TV history by Tony Randall and Jack Klugman, let's just say feelings run high. I'm a Lemmon-Matthau guy myself; the shtick seems less forced, the emotion more genuine, the acting fresher and the not-quite-gay subtext more deftly handled. Discuss among yourselves.