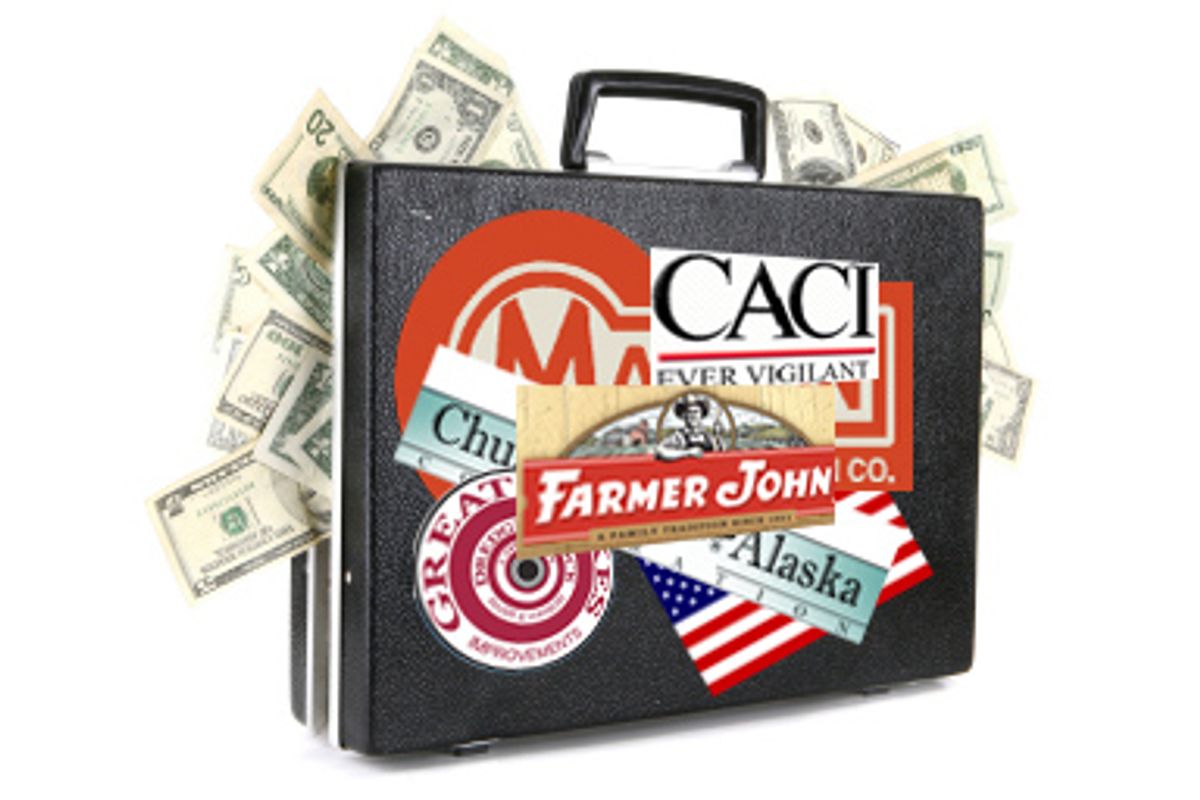 One company paid nearly $1 million for destroying seagrass in the Florida Keys marine sanctuary. Another settled a discrimination case after federal investigators found it refused to hire black employees. A third firm was rebuked by the Army for poorly screening the interrogators it hired -- interrogators who later abused prisoners at Abu Ghraib.

Despite those problems, the three companies have won millions of dollars in contracts under the economic stimulus package.

In the three months since President Barack Obama signed the $787 billion stimulus bill, the federal government has awarded more than 800 contracts to repair military buildings, thin forests, and clean up Cold War nuclear plants. Much of the initial $3.8 billion in awards has gone to large companies with long records of working with the government.

But some contractors have paid hefty fines for breaking environmental, safety or other regulations, ProPublica found in a review of the first round of contracts from federal agencies.

None of the contractors' past violations was deemed serious enough to disqualify them from future government business. That typically requires a criminal charge, delinquent taxes or an attempt to defraud the government. Outside of that, federal agencies have the discretion to suspend or ban a contractor for "any offense indicating a lack of business integrity."

For example, departments can consider whether a contractor disciplined employees or put systems in place to prevent a problem from happening again, said Tom Gavin, a spokesman for the White House Office of Management and Budget.

Government officials, the companies and even some advocacy organizations say past mistakes shouldn't necessarily tar a contractor forever. But there will soon be thousands of contractors who will receive billions more in taxpayer dollars from the stimulus.

"The public should ask important questions: What kind of violation was it? Was it systemic? What did they do when the violation was found?" said Brian Turmail, spokesman for the Associated General Contractors of America, the leading construction company trade group.

"They should also look at the type of work that the company is involved in," he added. "If they just do paving and they have a lot of safety violations, it's different than if they're a bridge or dredge contractor, where there are simply more violations that might apply."

Interrogators lacked training
One company receiving stimulus money, CACI International, has won three contracts worth $1.5 million to provide contracting specialists to the Forest Service. The consultants will help the agency evaluate projects so that it can spend stimulus money quickly.

CACI came under fire in a 2004 Army investigation, which found that interrogators it provided for the Abu Ghraib prison in Iraq had dragged a handcuffed prisoner along the ground, placed a prisoner in an "unauthorized stress position," and violated the ban on drinking alcohol.

The investigation found that the company had an inadequate screening process and hired employees who "lacked sufficient background and training." One CACI employee, who bragged about dressing a prisoner in women's underwear and lied to investigators about using dogs in interrogations, had "little or no interrogator experience" before Abu Ghraib, the report said.

The abuse allegations were referred to the Justice Department. CACI said in a statement that it has provided services to the government for 40 years. Workers were experienced and qualified, it said, and no employees have been charged with misconduct in connection with the company's work in Iraq.

CACI is one of the 100 biggest federal contractors overall, having received nearly $9.8 billion in government work since 2000, according to USAspending.gov.

The two companies have worked side by side before, and both paid settlements to the Environmental Protection Agency in 2003 and 2004 after their leaky barges spilled dredging waste into a national marine sanctuary near Richmond, Calif.

In 2002, Great Lakes also paid $1 million in damages for dragging a dredge pipe across the bottom of Florida Bay, causing a 13-mile-long scar that destroyed nearly 200,000 square feet of seagrass in the national sanctuary, according to the Justice Department. Seagrass is critical for the sanctuary's fish, manatees and turtles, which depend on it for food.

Despite its regional name, the Oak Brook, Ill., company does dredging around the world and performed work in Iraq that opened a port to humanitarian relief supplies. It has received $1.9 billion in federal contracts since 2000.

Candice Walters, a spokeswoman for the Corps of Engineers, said the agency considers a company's record when awarding contracts. Both companies have volunteered to participate on a new council on dredging and marine construction safety, she said.

Manson Construction, based in Seattle, has also been cited for worker safety violations. In 2004, Manson was part of a joint venture known as KFM working on the San Francisco Bay Bridge. California's Division of Occupational Safety and Health found that KFM knew that employees working on the bridge had inhaled potentially dangerous levels of manganese but did nothing to fix the hazard.

In 2006, Cal/OSHA fined KFM about $6,000 for willfully misreporting or failing to report 13 worker injuries at the bridge site, ranging from a worker who fell off the back of a flat-bed truck to a worker who was knocked unconscious from a blow to the head.

Despite the fines, the agency commended KFM for having few serious injuries and said it considered the bridge project one of the safest construction worksites in the state. Manson has won $443 million in federal government work since 2000. The company did not return calls seeking comment.

Ched Jennings, president-elect of the Workers Injury Law & Advocacy Group, a national organization based in Washington, D.C., said it's unreasonable to expect companies to never have an accident. But "anything that's willfully concealed … should be a bar for a company in this country to be able to get the stimulus money," he said. "Why should we be sending taxpayer money to companies that are not toeing the line on workplace injuries?"

A record of discrimination
To guard against waste, fraud and abuse, the government has a process for federal agencies to bar or suspend a company from getting future taxpayer business. Those companies go into a computer system that contracting officers must check before awarding new projects.

While companies can be suspended for pollution violations, such as dumping chemicals, or repeatedly putting their workers in harm's way, not every firm is. A check of the database of federal debarred and suspended contractors turned up no stimulus contractors.

But records show that some of the first contractors have subjected workers to racial slurs and discriminatory treatment.

Chugach Alaska Corp. and its subsidiaries have received 55 stimulus contracts worth $23.5 million for a variety of repairs and maintenance at military facilities. In 2004, one of the subsidiaries, Chugach Management Services, reached a confidential settlement with 47 black employees who submitted a litany of discrimination complaints at the Army's Redstone Arsenal near Huntsville, Ala.

According to the lawsuit, black employees were made to work in snake-infested grass without protective clothing. The complaint also alleges that a white supervisor told black workers not to eat at certain restaurants in town.

A determination letter from the federal Equal Employment Opportunity Commission said that the company, "despite complaints and knowledge of racial harassment, failed to take effective remedial action to stop the harassment."

"Chugach has a very good reputation from the standpoint of equal opportunity employment and having affirmative action plans that are required to maintain government contracts," he said. "Our history speaks for itself."

MW-All Star is a partnership in which a large government contractor, All Star, mentors a small disadvantaged business, MW Services, to help it gain experience to get federal contracts.

In 2002, a federal magistrate judge ruled that three Hispanic workers painting military family housing at White Sands Missile Range in New Mexico were repeatedly subjected to ethnic epithets from a carpenter working for All Star.

The judge said the company had failed to enforce its policy against racial discrimination and awarded the painters, who'd been employed for only a few weeks, a total of $105,000 for lost wages, emotional distress and punitive damages.

RAT Board scrutiny
The government's stimulus oversight board is also checking contractors' backgrounds, said Nancy DiPaolo, spokeswoman for the panel, known as the Recovery Accountability and Transparency Board. If contracts contain questionable factors, such as missing details or a problematic company background, the contract can be revoked, she said. DiPaolo declined to elaborate on what situations might be considered problematic.

For example, what about a company with violations in multiple areas?

In 2008, the company, also known as Farmer John, paid $63,000 in pollution fines to the California Environmental Protection Agency for failing to inspect its trucks for excess diesel emissions.

In 2005, the EEOC obtained a $110,000 settlement on behalf of seven black applicants, who it says were rejected because the company had a practice of hiring only Hispanics for warehouse and production jobs.

In 2004, a janitor was hospitalized with chemical burns when he failed to wear a safety apron while cleaning the liverwurst machine. The Occupational Safety and Health Administration fined the company nearly $33,000 but later reduced it to $2,300 as part of a settlement.

Hormel Foods, which operates Clougherty as a subsidiary, did not return calls for comment.