As resistance fighter John Connor, Christian Bale struggles to save mankind -- and this iconic sci-fi franchise 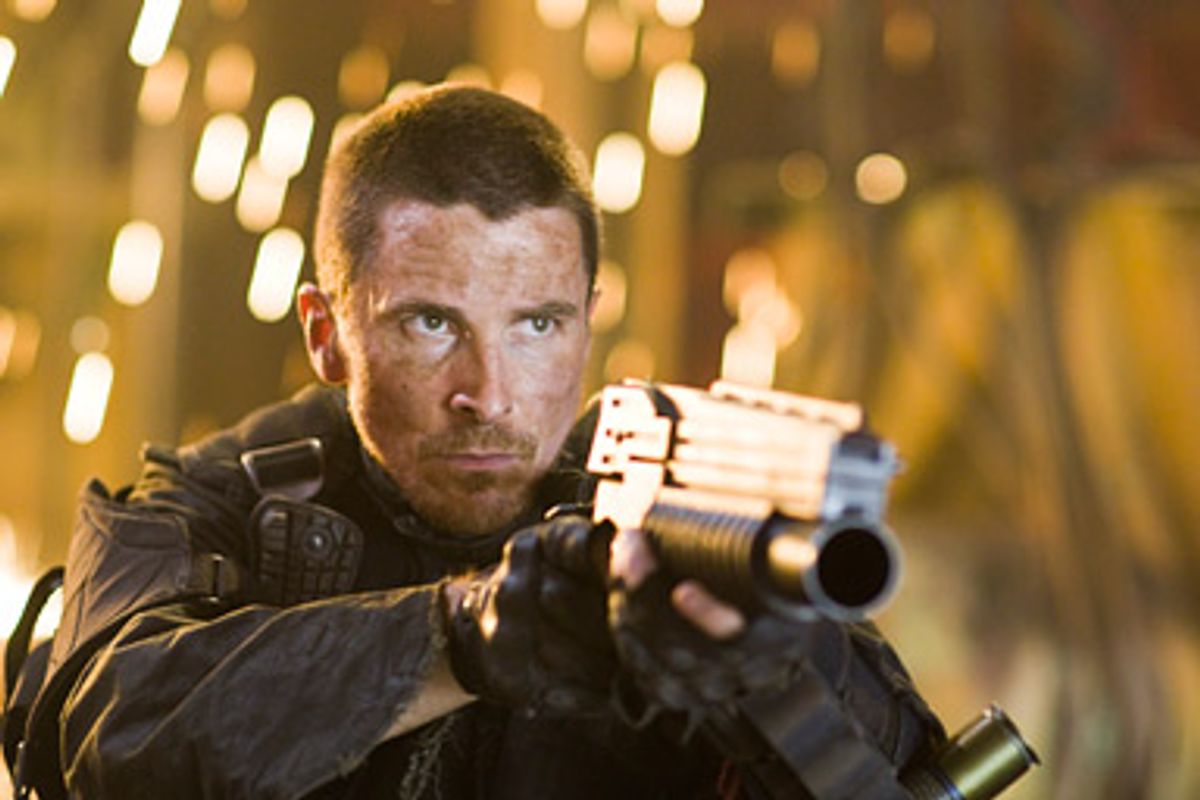 "Terminator Salvation," directed by McG and written by John D. Brancato and Michael Ferris, mines the mythology of James Cameron's original 1984 "The Terminator" by indifferently hacking away at it with a virtual remote-controlled backhoe. This is the fourth picture in the "Terminator" franchise -- the previous one, the 2003 "Terminator 3: Rise of the Machines," was among the last pictures made by Arnold Schwarzenegger before he traded literal muscle for political clout -- and to work, it would have to be compelling enough to make people give a damn. But "Terminator Salvation" is so programmed, so impersonal, that it practically dares you to warm to its characters. Why should we care about iconic resistance leader John Connor (Christian Bale), or his teenage dad, Kyle Reese (Anton Yelchin), if not even McG can be bothered to give a fig? Even the action sequences feel canned: Characters run toward helicopters, yelling, or grunt as they engage in jerky hand-to-hand combat. They may as well have been lifted from a lazily programmed computer game.

But then, this is summer entertainment, brainless fun -- so maybe we're supposed to look the other way as Bale gives what may be the most drab performance of his career. His John Connor is the man who wasn't supposed to be born: "Terminator Salvation" is set in 2018, 34 years after the action of the first "Terminator." The totalitarian creeps at Skynet are well on their way to exterminating humans, using killing machines, or Terminators, to do the dirty work. In "Terminator Salvation," those machines don't yet look very Schwarzenegger-like (although, thanks to the magic of computer imagery, Schwarzenegger does make an appearance, sort of); in this movie's vision, Terminators are gangly, unstoppable gunmetal-colored behemoths, with all-seeing red eyes.

But a small, hardy band of flesh-and-blood foot soldiers are fighting back: John Connor is the bravest and most charismatic of all -- he gives rousing, FDR-style radio addresses to his scattered followers, which include Yelchin's young Kyle Reese and the silent but sensitive little moppet, Star (played by young actress Jadagrace), who tags along with him. Kyle Reese will, of course, become John Connor's father -- or already is, except he doesn't know it yet, because it's not yet 2029, the year he'll go back in time to save John Connor's mother, Sarah. But let's not get ahead of ourselves. In "Terminator Salvation," John Connor (more a legend than a man, he's never called just "John" or "Connor") also has to tangle with a sullen, mysterious figure named Marcus Wright (Sam Worthington), who may or may not be on the side of the freedom fighters.

Meanwhile, a resistance babe named Blair Williams (Moon Bloodgood) strides through the movie on extremely long legs: She's about the only thing in "Terminator Salvation" that suggests McG or cinematographer Shane Hurlbut (the target of Bale's infamous F-bomb tirade a few months back) have any aesthetic sense at all. Otherwise, "Terminator Salvation" is downright ugly to look at, rendered in dour sepia and gray tones that scream "bleak future" in capital letters. (Compare that with Emmanuel Lubezki's work in "Children of Men," which is set in an equally bleak future and still has a vital, shuddering beauty.)

McG clearly thinks he's giving us a visual spectacle: When things explode in "Terminator Salvation," as they inevitably do, they explode big. But that doesn't give the movie any more fire power, or any more weight. McG and his screenwriters have taken the poetic ideas of the original story and fed them through a noisy meat grinder. The actors respond by doing little more than posing and posturing. Bale is so busy playing a quality -- that's Mr. Bravery to you, bub -- that he doesn't bother to do the work of playing a character. His performance is the equivalent of watching a forehead vein throb for two hours -- although that might actually be more captivating. Worthington works harder, and throws off a few more sparks, than Bale does. But the movie doesn't give him much latitude for expressiveness, even though his character is supposedly suffering some emotional pain. Worthington may be attempting a deeply internalized performance, but the movie around him is too coldly mechanized to allow him the breathing space he needs.

In fact, everything about "Terminator Salvation" feels calculated and diagrammed. McG is a serviceable-enough filmmaker when he knows he's making dumb eye candy à la "Charlie's Angels." But here, he thinks he's dramatizing a heady, man-vs.-technology showdown, and he doesn't seem to realize that the outcome doesn't matter. "Terminator Salvation" has no brains and no soul; it's just a mass of stiff, creaking metal joints. Clearly, the machines have won.