Republicans: Attack this woman at your peril

The White House prepares for a fight aides think they can win over Sonia Sotomayor's Supreme Court nomination. 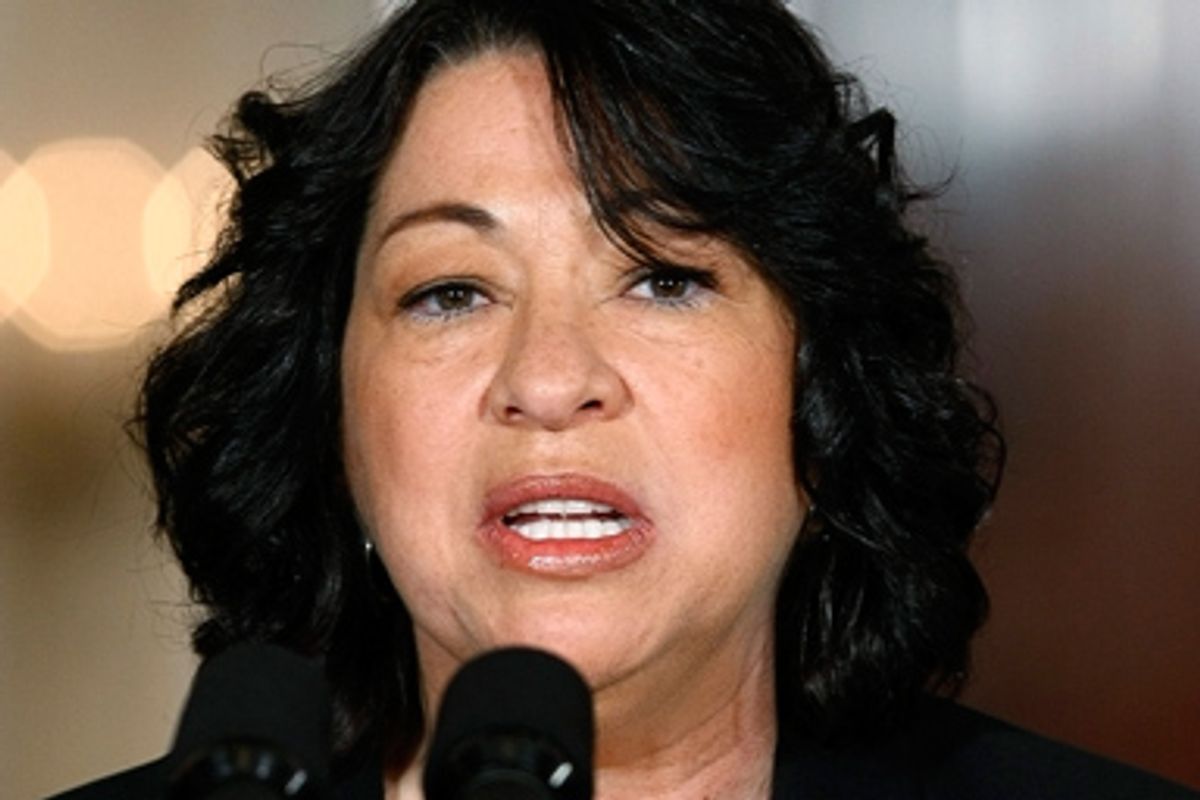 The new face of evil, if the GOP decides it wants all-out war over the future of the Supreme Court, is a 54-year-old Puerto Rican judge from the South Bronx with two Ivy League degrees and a biography that reads like the textbook definition of the American dream. Even Jesse Helms voted to confirm her when she was first put on the federal bench -- by George H.W. Bush. Oh, and for good measure, she also saved baseball. And people wonder why it's hard being a Republican these days?

By nominating Sonia Sotomayor to the Supreme Court Tuesday, President Obama didn't make life any easier for his political opponents. Sotomayor would be the first Latino justice, the third woman on the court, the only sitting justice with any experience as a trial judge (Justice David Souter, whom she would replace, has that distinction now). Though conservatives are already trying to paint her as a radical liberal who's only one step away from hurling Molotov cocktails at the Constitution, based heavily on an out-of-context YouTube clip, most observers say she's far more moderate. The White House, previewing the strategy for getting Sotomayor confirmed, tried to dismiss the idea that they were girding for battle. "I hesitate to use the term 'war room,' because we're not expecting a war," a senior administration official said Tuesday.

But no Democrat in town would really be complaining if the GOP started one; Sotomayor won't be easy to demonize. Introduced to a heroine's welcome by Obama in the East Room of the White House Tuesday morning, she came across as both humble and confident, a tough balance to strike. (Vice President Biden, who knows a little bit about public speaking pitfalls, later congratulated her, "Piece of cake.") "Although I grew up in very modest and challenging circumstances, I consider my life to be immeasurably rich," she said after Obama introduced her in the East Room of the White House. "It is a daunting feeling to be here. Eleven years ago, during my confirmation process for appointment to the 2nd Circuit, I was given a private tour of the White House. It was an overwhelming experience for a kid from the South Bronx. Yet never in my wildest childhood imaginings did I ever envision that moment, let alone did I ever dream that I would live this moment."

Sotomayor does seem to fit what Obama described as a key criterion for the pick -- a wealth of experience with how the law affects people. She worked as a prosecutor in Manhattan after graduating from Yale law school, then as a corporate litigator in the mid-1980s -- not exactly a sign of a radical bent. In 1992, named to the U.S. District Court for the Southern District of New York, she was the youngest judge in the court. She heard more than 400 cases before former President Clinton tapped her for the U.S. Court of Appeals for the 2nd Circuit in 1998. Expect to hear as much about her early childhood in the South Bronx, though, including her father's death when Sotomayor was 9, her youthful love of Nancy Drew and her diagnosis as a young girl with Type I diabetes. Those human elements are what aides are hoping will make it harder for critics to even begin to get traction if they try to chip away at her résumé.

Obama met Sotomayor for the first time on Thursday, during a secret, marathon seven-hour session in the White House, aides said. They talked constitutional law for an hour. He held similar sessions with Homeland Security Secretary Janet Napolitano, Solicitor General Elena Kagan and Judge Diane Wood, the other finalists for the job, but he knew all of them before the search began. Sotomayor simply struck Obama as the right pick, right off the bat. "She's got a great record and a great story," the administration official said. "[Obama] feels she's the best choice for this job right now." The president told aides on Friday he thought he was ready to announce his decision, but waited until Monday night to call Sotomayor and the runners-up.

Reaction in Washington fell on mostly predictable lines -- liberals liked the pick, conservatives didn't. "President Obama used this opportunity to do exactly what he promised in last year's election -- to select a person who has demonstrated an abiding commitment to core constitutional values of justice, opportunity, and equality under the law," said Michael Keegan, president of the progressive group People for the American Way. "Judge Sotomayor is a liberal judicial activist of the first order who thinks her own personal political agenda is more important than the law as written," said Wendy Long, of the Judicial Confirmation Network, a group that thinks the current Supreme Court -- headed by George W. Bush appointee John Roberts -- is a "liberal activist" body. "She thinks that judges should dictate policy," harrumphed Long, "and that one's sex, race, and ethnicity ought to affect the decisions one renders from the bench." Rush Limbaugh, as you might guess, went even further, calling her a "reverse racist" appointed by a president who is, himself, "the greatest living example of a reverse racist."

Actual members of the Senate, who are the only ones who will get to vote on the nomination, were more circumspect. Aides said Obama consulted every member of the Senate Judiciary Committee before making his decision, and they expect that to pay off. (He also called Senate Majority Leader Harry Reid, Judiciary Committee Chairman Patrick Leahy and their GOP counterparts, Mitch McConnell and Jeff Sessions, before making the announcement Tuesday.) The GOP establishment --unlike grass-roots conservative groups who are hoping to use the nomination to raise money and energize their base -- responded to the nomination by urging cautious and measured deliberation. "Senate Republicans will treat Judge Sotomayor fairly," McConnell said. "Our Democratic colleagues have often remarked that the Senate is not a 'rubber stamp.' Accordingly, we trust they will ensure there is adequate time to prepare for this nomination, and a full and fair opportunity to question the nominee and debate her qualifications." Unless the White House vetting process failed to turn up something, the best the GOP can probably do is slow-walk the process, to frustrate Obama's hopes of having her confirmed by the start of the next court term.

Administration officials claim they're not worried about that. But even if the White House says it's not expecting a fight, aides are still preparing for one. They distributed talking points to allies around the city that emphasized Sotomayor's biography and tried to pressure Republicans into going along with a speedy and polite confirmation process. "The average number of days between nomination and confirmation for the last five Supreme Court justices is 72 days," said the talking points, a copy of which was obtained by Salon. "Justice Roberts was confirmed 72 days after his nomination, and Justice Ginsburg was confirmed in just 50 days." The White House knows the GOP doesn't have much desire to oppose a popular president's very sympathetic nominee for the court, but just in case, the administration doesn't mind pressing.

A few hours after appearing with Sotomayor Tuesday, Obama boarded a plane to Las Vegas, where he'll do a little fundraising for Reid's campaign. You could hardly blame him if he got some gambling in on the overnight trip, though. If the Sotomayor pick is any indication, Obama feels like he's on a winning streak.