In the shadow of Cheney

Obama could spring America from the dank culture of fear spread by Cheney and Bush. So what's holding him back? 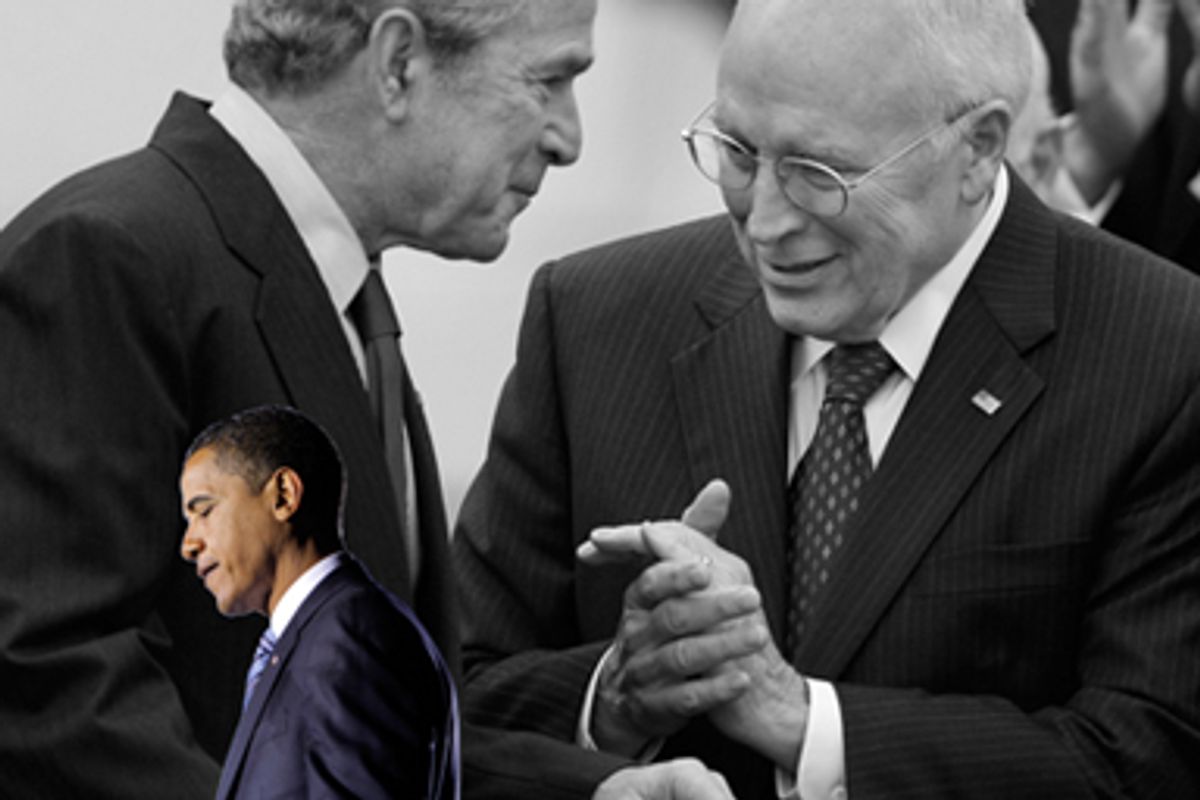 Last week, Dick Cheney and Barack Obama carried on a bizarre, disembodied and deeply dissatisfying debate about national security. In a major speech on May 21, Obama denounced torture, defended his plan to close Guantánamo and blasted the Bush administration's approach to fighting terrorism, saying it "failed to rely on our legal traditions and time-tested institutions [and] failed to use our values as a compass." One minute later, Cheney -- who had been blasting Obama's national security for weeks -- took to the airwaves to warn that Obama's rejection of torture and his plan to shut down the military prison at Guantánamo were "unwise in the extreme." Accusing Obama of "recklessness wrapped in righteousness," the former vice-president said Obama had made the country less safe.

For the large majority of Obama's supporters who utterly reject the Bush administration's approach to fighting terrorism, the president's speech was disillusioning. Despite his soaring rhetoric about "upholding our most cherished values," Obama proposed eviscerating those values by continuing the Bush policies of military tribunals and indefinite detention. Coming on the heels of the Senate's humiliating 90-6 vote to keep Guantánamo open and forbid transferring any of its inmates to U.S. prisons, Obama's speech was a dispiriting confirmation that the country's leadership is still locked into the same fearful "war on terror" mind-set.

The sad thing is that Obama could have chosen a different path. Yet he clung to establishment positions that his supporters have long rejected. His decisive victory in November proved that America is ready to turn the page on the entire Bush era, from its economic policies to its "war on terror." For an exhausted and disillusioned country, Obama represents hope, and embracing hope means sloughing off fear. Like Cheney, who spent much of his time hiding in an underground bunker, Americans spent the Bush years cowering in a metaphorical cave, terrified that the terrorists were coming to get them. Bush's hyper-aggressive foreign policy, his trashing of civil and legal rights and U.N. conventions, were simply the other face of a craven and debilitating fear.

The terrorist attacks on 9/11 were a dreadful trauma. But that trauma took place almost eight years ago, and a natural and salutary forgetfulness has occurred. One of the virtues of this still-green republic has always been its capacity to quickly recover from setbacks, to refuse to dwell on the past, to constantly remake itself. Of all the American virtues, elasticity is perhaps the most important. In a process as natural as the blossoming of flowers in the spring, Americans are ready to reclaim their courage. And they expect and want their young president to lead them forward.

Obama has tried to lead America out of the shadows of the Bush years. He has projected a calm optimism, a reasoned determination, that is a breath of fresh air after the puerile, bullying bravado of George W. Bush and the dark, croaking counsel of his evil courtier Cheney. And he has said inspiring things about the importance of defending our laws, rights and traditions, even in the face of terrorist threats. But because Obama has failed to directly reject the irrational boogeymen his predecessors whipped up, and because he has continued many of their policies, he has not been able to spring us from their dank culture of fear.

The Guantánamo debacle, in which Senate Democrats voted overwhelmingly to reject funds to close it, is just one painful result of Obama's unwillingness to challenge the culture of fear. The Senate was spooked by polls showing that Americans, their paranoia aroused by talk radio demagogues and Fox News hacks, were afraid that terrorists would end up in their backyards. Obama was rightfully criticized for failing to come up with a coherent plan for what to do with the Guantánamo detainees.

But that was not Obama's real problem. His real problem was his failure to forthrightly say that while terrorism remains a threat, its danger has been greatly overblown. Obama needed to tell Americans the truth, which is that no open society can ever be absolutely free from terrorist attacks, and that a society that allows its irrational fear of such attacks to cause it to jettison its laws, freedoms and most cherished traditions has already lost to the terrorists. He needed to say that while we will never forget 9/11, always honor the memory of its victims, and never let our guard down, we cannot allow one attack, no matter how horrific and spectacular, to determine the nature and future of our country. He needed to draw a line in the sand, and tell Americans that while he will do everything in his power to protect them, only fools dream of eternal, perfect safety. In short, he needed to seize the terrorism shibboleth root and branch and pull it out of the ground.

This would not have been easy. Politicians do not generally choose to ask their constituents to accept risks of any kind. Denying death may be mentally unhealthy, but it is de rigueur in politics. And even though the Republican Party is going through a meltdown so grotesque that it makes Kafka's "The Metamorphosis" look like an inspiring tale of personal growth, Democrats continue to be terrified that the right will paint them as "soft on national security."

Above all, there is the very nature of terrorism, which is, well, terrifying. Because it is random, indiscriminate, driven by hatred, and seemingly pointless, terrorism taps into primordial human fears in a way that no other form of violence does. It is a monster that inhabits our collective id. Since 9/11, the word "terrorism" has been a totem, a quasi-religious myth, a nightmarish archetype that occupies the same place in our national imagination that "hell" did for the people of the Middle Ages. "Terrorism" blurs the boundaries of political and personal fear: It represents at once a thoroughly human evil to be hated and fought against, and the impersonal, fatalistic face of death itself. Terrorism is fate with a hideous face, like the White Whale that Ahab hates and tries to kill in Melville's "Moby-Dick." (Indeed, the Bush administration's unwinnable, endless, self-defeating "war on terror" is more than a little reminiscent of Ahab's obsessive quest -- which ends, it is well to remember, with the destruction of his ship and all of its crew save the narrator Ishmael.)

Because terrorism in our national imagination is simultaneously villain and nemesis, human and inhuman, the "war" against terrorism slips into becoming a war not just against fanatical jihadis but against our own death, against the very idea of death. As we accept this, repression of reality and the infantile fantasy of perfect safety -- in other words, cowardice -- become the driving forces of our lives.

This craven position dishonors a country whose troops fought at Valley Forge and Shiloh and Belleau Wood and Guadalcanal and Hue and Fallujah. It is not worthy of the mighty nation whose diverse people came together 60 years ago to help defeat the most dangerous tyrant in the history of humankind. But it is not an easy one for a politician to oppose. Indeed, the cadaverous Cheney, who has now fully embraced his role as the horrifying shadow of our national soul, is essentially accusing Obama of leading America toward death.

Once the argument is framed in these terms, Obama cannot win. By tacitly accepting Cheney's terms -- by shamefully proposing that we detain suspected terrorists indefinitely without real trials, or by refusing to release photographs of Americans torturing people in their control -- Obama has enabled and encouraged our diffuse national cowardice. The American people will continue to cling to irrational positions, like refusing to put convicted terrorists in supermax penitentiaries from which no one has ever escaped, until Obama puts the threat of terrorism in its correct perspective, removes it from the realm of metaphysics and nightmares and returns it to earth, as the ugly but manageable tactic that it is. The only way for Obama to break out of Cheney's trap is to reject the suppositions it is based on.

Cheney's death-obsessed vision found its ultimate expression in his notorious "1 percent doctrine." As revealed in Ron Suskind's eponymous book, the doctrine held that the U.S. should treat an even 1 percent chance of a terrorist attack as if it were a certainty. This doctrine was directly responsible for America's calamitous behavior in the last eight years. It led to policies and actions -- torture, targeted assassinations, indiscriminate aerial bombing, detention without trial, denial of habeas rights -- that only enrage previously neutral people, increase the number of potential terrorists and threaten our national security.

Which is exactly what al-Qaida and their ilk want. A few fanatical jihadis hiding in caves cannot fatally damage the United States: Only the United States can fatally damage the United States. Under the fearful reign of Bush and Cheney, America went a long way toward becoming a country its own citizens would not recognize. As his May 21 speech showed, Obama clearly realizes that many of the policies pursued by his predecessors are irrational, inhumane, unjust and self-defeating. But he has not repudiated their fundamental error, their misapprehension of the actual threat posed by Islamist terrorists.

Which is why Obama's left hand has consistently undone what his right hand has done. He is by nature a difference-splitter, a position that has its virtues. But some differences cannot be split. Either we are locked in an endless, self-defeating war on terror or we are not. Either our laws, traditions and freedoms are more important than an infantile dream of perfect, eternal safety, or they are not. Either we are clear-sighted enough to realize that different kinds of enemies require different responses and that treating a handful of jihadis as if they were the second coming of Nazi Germany is foolish, or we are not. Either we live in the land of the free or we do not.

In 1933, when the nation was in the depths of the Great Depression, Franklin Delano Roosevelt delivered his first inaugural address. That towering president said, "This great nation will endure as it has endured, will revive and will prosper. So, first of all, let me assert my firm belief that the only thing we have to fear is fear itself -- nameless, unreasoning, unjustified terror which paralyzes needed efforts to convert retreat into advance."

FDR's words gave heart to Americans facing a crisis and a threat far worse than any posed by terrorists today. The country has a new president, and it wants a new direction. It is waiting for him to sound his trumpet.