Proposition 8 and the Sonia Sotomayor nomination expose the hypocritical state of the sexual revolution today. 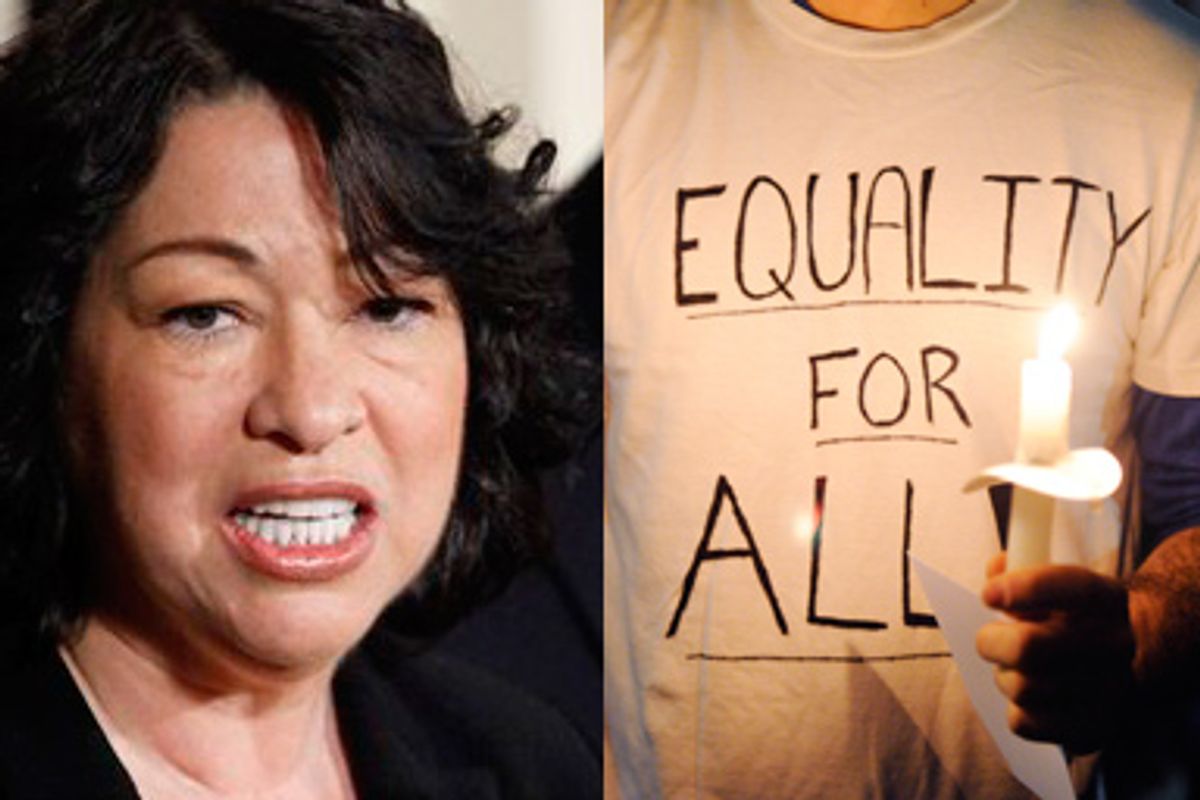 Left: Sonia Sotomayor speaks on Tuesday, May 26, 2009, in the East Room of the White House in Washington. Right: Demonstrators hold candles as thousands turned out for a rally to protest the passage of California's Proposition 8, a ban on same sex marriage, in Los Angeles November 8, 2008.
--

Two events on Tuesday morning -- separated by a few hours and the span of the continent -- suggest the dimensions of the sexual revolution that American women are living and the power of men to support or to deny that revolution.

In Washington, President Barack Obama nominated Sonia Sotomayor to be a United States Supreme Court justice -- his first appointment to the high court. A few hours later, in San Francisco, a majority of judges on the California Supreme Court upheld Proposition 8 -- the voter-approved definition of marriage as the union of one man and one woman.

While it had been widely expected that the president would appoint a woman to replace retiring Justice David Souter, Federal Appeals Judge Sotomayor was immediately described in the press and celebrated by Latino political leaders as the nation's "first Hispanic Supreme Court justice."

More pointedly, if the Senate confirms the appointment, she will be the first unmarried (and divorced) woman on the Supreme Court.

In 2008 California passed Proposition 8, in no small part due to the defense of traditional marriage by the California Conference of Catholic Bishops and the leadership of the Church of Jesus Christ of Latter-Day Saints. It is an irony worth remarking that both Roman Catholicism and the Mormon Church are governed by elderly men, and both religions have known more than their share of male sexual scandal.

Indeed, the Catholic clergy in Europe and the United States has been shamed of late by revelations of clerical misbehavior, often involving unwilling boys. Last week, for example, the Irish government released a nine-year study of sexual abuse and sadism committed by Catholic priests and religious orders of brothers over more than 60 years in state reformatories and orphanages. The misbehavior required the acquiescence of civic as well as church officials.

American bishops have been anxious to change the subject. And what better strategy -- in an era of sexual scandal -- than a crusade to "preserve" marriage by precluding any but a heterosexual and sacramental definition of marriage?

To fight the legalization of gay marriage by the California court, San Francisco's Catholic Archbishop George Niederauer enlisted the help of Mormon officials in Utah (where Niederauer, for a time, served as bishop).

The Church of Latter-Day Saints is the fastest-growing religion in America. But, despite its adherence to Republican "family values," the Mormon Church is haunted by a cowboy polygamy (that often entailed marrying underage girls to overage men).

It would require a comic talent as large as Mark Twain's to do justice to the hypocrisy that joined California's Catholic bishops with Mormon male elders in their campaign for Proposition 8.

Hypocrisy won the day. Conservative church leaders successfully blurred any distinction between sacramental and civil marriage. The justices of the California Supreme Court refused to challenge the right of the majority to deny gays a marital right the justices had, only months earlier, deemed constitutional.

The rest of us continue to live in an America where more than half the population of adult women is living without a male partner. Last week, we also learned that 40 percent of American mothers are unwed, many by choice rather than because of an errant male.

As Barack Obama stood alongside Sonia Sotomayor in the East Room of the White House, it occurred to me that we are living in the America of Ann Dunham. Dunham, the president's mother, was twice married, twice divorced. She was a scholar who traveled far from the university library, to several continents.

In an interview with Time magazine, Barack Obama called his mother "reckless." But surely Ann Dunham gave both her remarkable daughter and son a measure of confidence and daring. Because of his mother, Barack Obama is comfortable with the fact that there are women in this world who have much to give the world, whether or not they find a male to accompany them throughout their journey.

Sonia Sotomayor and her brother were raised by a single mother in public housing in the Bronx. (Sotomayor's father had died when Sonia was just 9 years old.) Working two jobs, her mother sent both children to Catholic elementary and high school.

Sonia Sotomayor attended Princeton University and Yale Law School. She married when she was in school. And then, most biographies published in the wake of her appointment note, without mentioning her ex-husband's name, she was divorced.

The fact that she is unmarried will give her that much in common with those of us who are homosexual in California.