False excuses for anonymity and irrationality on affirmative action

The right-wing argument about the affirmative action case is the most incoherent claim seen in some time. 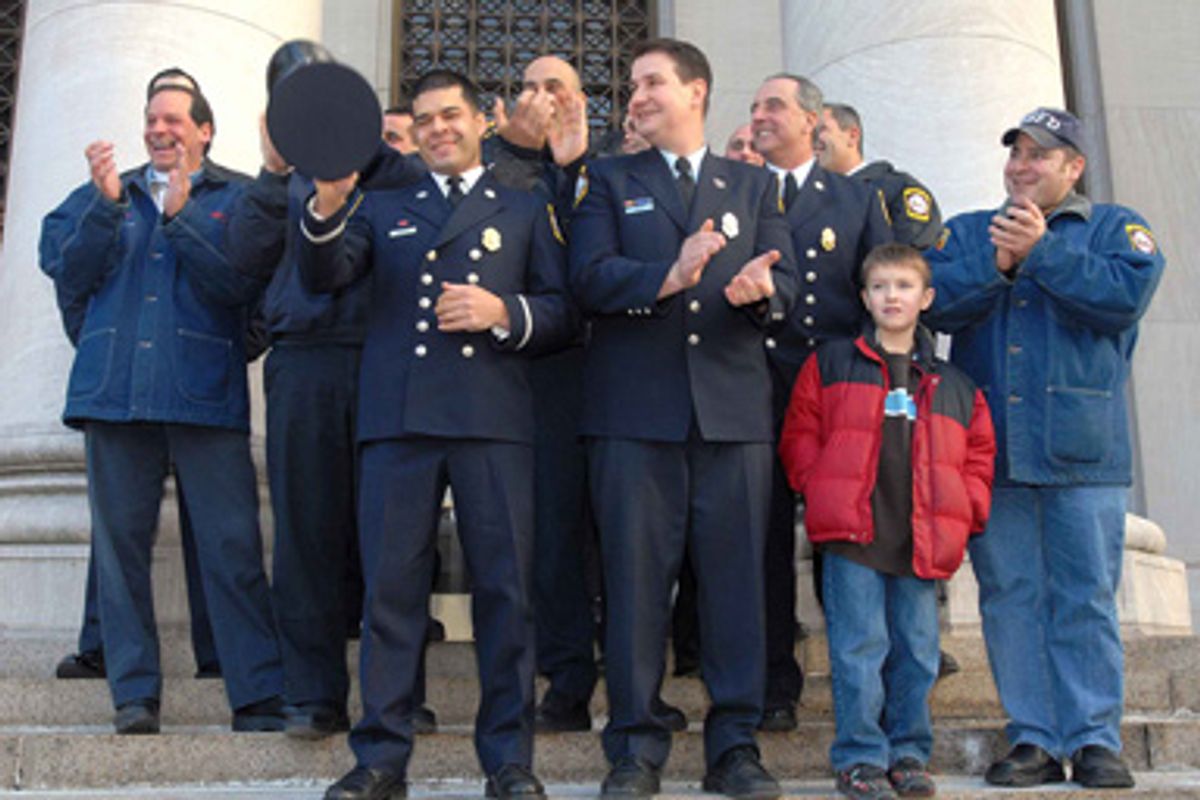 Jeffrey Rosen, The New Republic, explaining why he granted anonymity to people to smear Judge Sotomayor's intellect and character:

None of these people would have talked to me without the promise of anonymity: some still argue before the judge, and others continue to interact with her. . . . Anonymous comments aren't ideal, but there was no other way, in this situation, to get people to share candid questions about judicial temperament.

“I felt she could be very judgmental in the sense that she doesn’t let you finish your argument before she jumps in and starts asking questions,” said Sheema Chaudhry, who appeared before Judge Sotomayor in an asylum case last year. “She’s brilliant and she’s qualified, but I just feel that she can be very, how do you say, temperamental.”

Gerald Lefcourt, a New York defense lawyer, has dealt with Ms. Sotomayor since she was an assistant district attorney and later a federal district judge. Mr. Lefcourt said she was “more strident and much more vocal” than some of her colleagues in his most recent appearance before her, involving an appeal of a securities fraud conviction. “She used her questioning to make a point,” he said, “as opposed to really looking for an answer to a question she did not understand.”

The excuse journalists typically give for indiscriminately granting anonymity -- we have no choice because it's the only way people will speak, and anonymous quotes are better than none -- does not, even if factually true, justify anonymity, since anonymous attacks are often worse than nothing:  they're inherently unreliable because they're made without accountability.  But as the above passages demonstrate, the excuse is often factually false, as was obviously true when offered by Jeffrey Rosen.  Journalists use anonymity not because they can't get anyone to speak on the record, but because, like Rosen, they're too slothful to do the work to find on-the-record sources and they crave the sort of sensationalism that is possible only when someone is allowed to spout inflammatory garbage without having their names attached.

"Sources" demand unjustifiable anonymity for one reason and one reason only:  they know that standard-free, reckless journalists will grant it to them.  If, instead, their choice were between (a) attaching their names to their opinions or (b) not having their opinions disseminated by the media, many of them would opt for (a) -- and our political discourse would be far, far better off as a result.

Adam Serwer makes an important point here that I was planning to make after reading this column today from Charles Krauthammer, which may be the most blatantly self-contradictory column of the year.  It's hard to imagine anything more contradictory than (a) the right-wing argument that empathy and political opinions have no place in judicial decision-making and (b) the right-wing argument that Sotomayor wrongly decided the Ricci "firefighters" case because what happened to Frank Ricci was terribly unfair and because affirmative action is a bad policy.

Inveighing against Sotomayor's Ricci decision by touting all the sad things that happened to Frank Ricci (Krauthammer:  "he spent $1,000 on books, quit his second job so he could study eight to 13 hours a day and, because of his dyslexia, hired someone to read him the material") is to demand that Sotomayor do exactly that which they claim is so inappropriate and which they accuse Sotomayor of doing:  namely, deciding cases based on emotion, empathy and political views about affirmative action rather than the law and judicial precedent.

I literally can't fathom a more glaring self-contradiction than those who are simultaneously objecting to the use of "empathy" in judicial decision-making and arguing that Sotomayor's Ricci decision was bad because of all the unfair things that happened to Frank Ricci or because of how bad affirmative action is.  Anyone arguing that Sotomayor wrongly decided Ricci by playing up the emotions of the case -- rather than by citing law and binding judicial precedent, including Second Circuit and Supreme Court cases on the topic -- is, by definition, advocating that judicial decisions be made based on empathy and/or the substitution by a judge of her own political views for those of the democratically elected officials in New Haven.  Isn't this too obvious -- even in our political culture -- not to be immediately understood by everyone?

Either judicial cases -- such as Ricci -- should be decided on the law and binding, relevant precedent, or they should be decided based on empathy for Frank Ricci and the alleged unfairness of affirmative action policies.  Which is it?

UPDATE:  On the issue of Sotomayor's temperament, the NYT article this morning contains this passage:

Judge Guido Calabresi, a former dean of Yale Law School who taught Ms. Sotomayor there and now sits with her on the Second Circuit, said complaints that she had been unduly caustic had no basis. For a time, Judge Calabresi said, he kept track of the questions posed by Judge Sotomayor and other members of the 12-member court. “Her behavior was identical,” he said.

“Some lawyers just don’t like to be questioned by a woman,” Judge Calabresi added. “It was sexist, plain and simple.”

He said Judge Sotomayor’s forceful and lucid arguments had persuaded him to reconsider his position in a number of instances. “And I’m a tough act,” he said.

As I noted the very first time when I criticized Rosen's hit piece, complaining that a federal judge is aggressive, controlling, and even a bit bullying is like complaining that a politician panders to voters.  It may not be the most desirable behavior, but it is so common that it's actually more noteworthy when a judge isn't like that than when a judge is, and many of the most revered federal judges do exactly that.

That's why it is very hard to avoid the conclusion, as Judge Calabresi argues, that the particular objections to Sotomayor's so-called "temperament" are at least partially grounded in her demographic and cultural attributes -- the idea that it's perfectly fine and even commendable for the right kinds of judges, the ones who look and act like traditional authority figures, to be aggressive and even bullying with lawyers (that brilliant Scalia sure doesn't suffer fools; you better be prepared when you argue in front of him), whereas the same aggression is offensive and upsetting coming from other types of judges who don't know their proper place (Howard Kurtz:  "Tomorrow's NYT installment: Sonia can be bitchy on the bench. Look for a whole lotta TV segments on her judicial 'temperament'").

UPDATE II:  Hilzoy recently made a similar point about the glaring contradiction among those claiming to (a) oppose the use of "empathy" by judges and (b) oppose Sotomayor's decision in Ricci:

I have read many professions of outrage about this decision, but most of them focus on whether it is a good thing or a bad thing that Frank Ricci didn't get his promotion, rather than what the law requires. This puzzled me. Many of the same people who are outraged by the decision also criticize Judge Sotomayor on the grounds that she will substitute her personal preferences for the requirements of the law as written. One might therefore expect them to consider what the law required in this case, rather than simply asking whether the outcome she affirmed was the one they preferred. Oddly enough, however, they didn't.

This happens all the time:  where people -- mostly self-described "conservatives" -- claim to oppose an outcome-based judiciary, yet decide if they approve of judicial  opinions based on their preference for the outcome rather than legal arguments.  The most obvious example was Terry Schiavo, where a conservative Florida state court judge was faithfully applying clear Florida law, but since conservatives disliked the outcome on policy grounds, they viciously criticized the judge for failing to deviate from the law in order to give them the outcome they wanted.  It also happens when state courts -- such as in Iowa, California and New Jersey -- reach judicial decisions about same-sex marriage based on those state's Constitutions and the precedent applying it, and immediately, people who don't have the slightest familiarity with that state's law criticize the decision:  all because they don't like the policy outcome.

Those who scream the loudest about opposing outcome-based and politicized judicial decision-making are so often those who demand exactly that.  They criticize rulings because of their dislike of the outcome, not based on any legal arguments.  The Sotomayor attacks are proving that as clearly as anything else has.