The white man is being oppressed!

Rush, Newt and other right-wingers decide that Sonia Sotomayor is a racist. Project much? 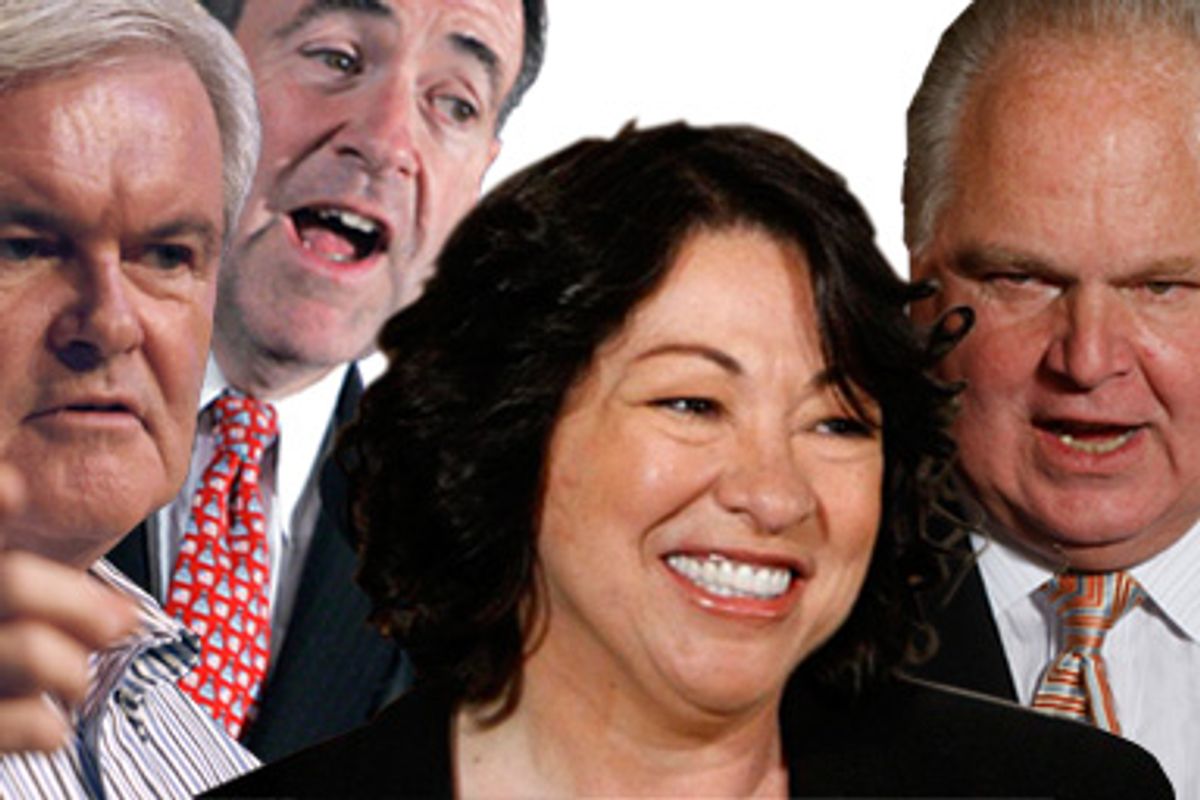 Imagine a world where the nation's first black president has nominated a long-serving, highly educated judge to become the nation's first Latino Supreme Court justice, and only its third female justice. The president is popular with voters in and out of his political party; the opposition party is struggling to come back from two straight losing elections by showing it's got a vision for the future, as well as hoping not to fall completely out of favor with Latinos, the country's largest -- and fastest-growing -- minority group.

You might not think, in that world, that early opposition to the court nominee would involve accusing her of being racist and sexist, and steadily questioning her intelligence in a way that implies she's an affirmative action pick. That might seem, in fact, like a fairly self-destructive strategy, one that even the opposition party's most hardcore base would want to avoid. But welcome to 2009.

"White man racist nominee would be forced to withdraw," wrote Newt Gingrich -- whom conservatives routinely fall over themselves to praise as a driving force of ideas for the Republican Party, and who is also, at least for now, making noises about running for president in 2012 -- on Tuesday on his Twitter feed. The ex-House speaker managed to make the sentiment sound even more Neolithic by compressing it to fit Twitter's 140-character limit. "Latina woman racist should also withdraw." He seemed to be grunting, not tweeting. (Gingrich was then forced to fend off questions about whether he had posted that item while touring Auschwitz -- which he denies, and which you couldn't make up.)

The GOP establishment has mostly been trying to stay away from a fight many Republicans realize they can't win; with 17 years as a federal judge and a biography that Horatio Alger might have thought too trite to use in his rags-to-riches novels, Sonia Sotomayor is virtually a lock to be confirmed. Though Pat Roberts of Kansas has said he'll vote against her, GOP senators are not rushing to the ramparts. But the base wants a battle, and some conservatives seem unable to resist using Sotomayor's nomination to bring up the resentment-based, racial backlash politics that the country mostly avoided during last year's historic election. The Sotomayor nomination has, at last, unleashed the pent-up id of a faithful, and fearful, GOP demographic -- the aging white male. Focusing on a New Haven, Conn., affirmative action case Sotomayor helped decide, a few lines from a 2001 lecture and a New Republic article questioning her intelligence that even the author is trying to back away from, the wingnut and pundit case against Sotomayor isn't particularly subtle. Or smart. But it does seem to involve more than a little of what Freud called "projection."

"This is a lifetime appointment to the highest court in the land," wrote the blogger E Pluribus Unum on Redstate.com, in a post that called Sotomayor "an incompetent student of the Constitution" and "a garden-variety race-hustling bigot." "She's demonstrated no qualifications other than being incompetent, activist, and bigoted." Not to be outdone, Rush Limbaugh hit the same themes. "She doesn't have any intellectual depth," he said on his show Wednesday. "She's an angry woman, she's a bigot. She's a racist. In her own words, she's the antithesis of a judge, she is the antithesis of justice, in her own words." And Pat Buchanan, on MSNBC, called her "an affirmative action pick" and compared her to Harriet Miers, who even Republicans agreed wasn't up to the job when former President George W. Bush tried to name her to the Supreme Court four years ago. On National Review's Web site, Mark Krikorian posted a screed about Sotomayor's insistence that people pronounce her name correctly. "Deferring to people's own pronunciation of their names should obviously be our first inclination, but there ought to be limits," he wrote. " Putting the emphasis on the final syllable of Sotomayor is unnatural in English ... and insisting on an unnatural pronunciation is something we shouldn't be giving in to."

The "racist" charges come partly from a lecture Sotomayor gave in 2001, at Berkeley's law school, where she said diversity on the bench was important because judges' life experience informs their decision making. That may not sound so controversial, but conservatives are pulling out one sentence in particular, where Sotomayor said she "would hope that a wise Latina woman with the richness of her experiences would more often than not reach a better conclusion than a white male who hasn't lived that life." In the context of the whole eight-page speech, it doesn't sound as jarring, but that didn't stop Ann Coulter from pouncing on it. Add that to a case Sotomayor helped decide, which the Supreme Court may overturn this summer, while her nomination is pending, and you've got a potent narrative. The federal appeals court Sotomayor sits on ruled against a white fireman in New Haven who sued the city after it threw out the results of a promotion exam because black and Latino firefighters appeared disproportionately likely to fail it.

Senior administration officials say the case just shows Sotomayor following legal precedent, but conservatives seem to think it shows an angry Puerto Rican on the warpath against the white man. "On September 11, America saw firsthand the vital role of America's firefighters in protecting our citizens," Wendy E. Long, counsel to the Judicial Confirmation Network, said in a statement Tuesday, minutes after word leaked that Sotomayor was President Obama's pick. "They put their lives on the line for her and the other citizens of New York and the nation. But Judge Sotomayor would sacrifice their claims to fair treatment in employment promotions to racial preferences and quotas." RedState's editor, Erick Erickson, felt compelled to stand up for white men on Wednesday. "I dunno, Sotomayor," he wrote on Twitter. "Considering white males engineered Western Civ, you'd think they'd have a handle on things to be able to make decisions."

Not surprisingly, the idea of trying to block a Latina judge from the Supreme Court by stirring up resentment over affirmative action doesn't strike many observers as the best way to appeal to Latino voters. "If Sonia Sotomayor's name were John Smith, she'd be just as qualified, and no one would be charging affirmative action or reverse racism," said Mark McKinnon, a Republican strategist who left John McCain's presidential campaign last year because he didn't want to help it go negative against Obama. "To suggest as much is itself racist. And I think most Americans see right through the smoke screen."

The White House -- which wouldn't comment for this story -- isn't exactly trying to avoid reminding people of Sotomayor's Puerto Rican heritage, preferably with a soft-focus lens that plays up the historic nature of her nomination. If conservatives overreach in opposing her, the administration won't complain. "Latino voters are responding with a tremendous sense of pride and appreciation," said Fernand Amandi, executive vice president of Bendixen & Associates, a Democratic polling firm that surveyed Latino voters for Obama's campaign last year. "The Hispanic community -- especially after the immigration issue -- is very sensitive to dog-whistle attack politics. During the immigration debate, Hispanics were never directly attacked or called out, but the message they received was they were not wanted here." The dog-whistle line may have already been crossed; it's not exactly a hidden message to call someone a race hustler.

Republicans who actually have to win elections don't seem interested in engaging in the backlash politics. "The approach that many of the senators and leadership is taking is, well, you know, let's give her a fair hearing and see what she has to say," said GOP pollster Glen Bolger. "It's really hard to stop this kind of nomination [with only 40 Senate seats], and then there's the political Hispanic angle." A Republican consultant who advises GOP candidates on winning Latino votes, Lionel Sosa, said he expected most senators to ask plenty of questions about Sotomayor, then support her. "For Republicans to mount a filibuster is foolhardy," he said. "If a Republican doesn't care about getting reelected, and a Republican doesn't care about the image of the Republican Party, they may vote against her, but I think in the end, we'll see who the smart ones are and who the not so smart ones are by how they cast their votes."

But the conservative noise machine has a tendency to bleed into the GOP mainstream; Joe the Plumber went from the accidental hero of wingnut blogs to the centerpiece of the McCain campaign in less than a week last year. The confirmation process could wind up taking up most of the summer, and there's plenty of time for Republicans of all sorts to start calling Sotomayor names by the end of it. Which is probably just how the White House wants it.