Obama's great uncle, who helped to liberate a subcamp of Buchenwald, speaks before the president's Germany trip. 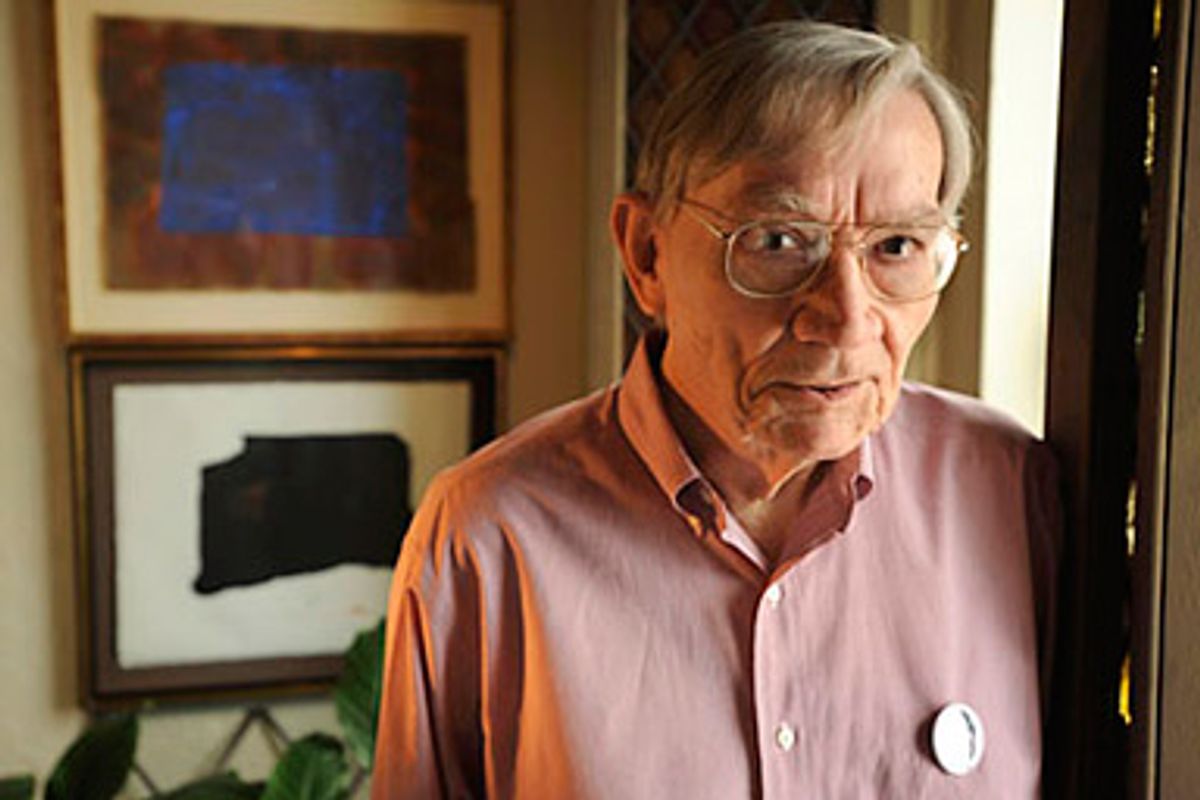 Barack Obama's great-uncle was one of the soldiers who liberated a subcamp of Buchenwald. A few days before the U.S. president's planned stopover in Germany, where he is expected to visit the concentration camp memorial, here is an interview with Charles Payne, 84, about his experiences in WWII.

Mr. Payne, early in June your great-nephew, President Barack Obama, will visit the former concentration camp Buchenwald, which you helped liberate at the end of the war. Will he be traveling in your footsteps?

I don't buy that. I was quite surprised when the whole thing came up and Barack talked about my war experiences in Nazi Germany. We had never talked about that before. This is a trip that he chose, not because of me I'm sure, but for political reasons.

What do you think could be his motives for this trip?

First, I think he already had this trip in mind -- with Cairo on the one end and Normandy at the other, and time for Germany in between. Second, perhaps his visit also has something to do with improving his standing with Angela Merkel. She gave him a hard time during his campaign and also afterwards.

At first Mr. Obama claimed that one of his family members was involved in the liberation of Auschwitz. How did this misunderstanding come about?

He couldn't have gotten it from me since we had never talked about this particular episode in the war. My sister and her husband were both great storytellers and sometimes made up the details to go along with it. They told him about my deployment with the 89th Infantry Division and apparently they mixed up a few details. Of course it came out immediately that he was wrong since there are enough people in America who know that Auschwitz is in the East and that the camp was liberated by the Red Army.

Afterward, Obama called you. What did he want to know?

He wanted to know where this camp was that I had helped liberate. I told him that it was Ohrdruf and that it was a subcamp of the Buchenwald concentration camp. I described a little bit of what I had seen.

You were barely an adult as a soldier back then -- how did you wind up at such a place?

Everybody who was able-bodied was drafted. I went down right at the time I graduated and told the lady that ran the Selective Service office. I said, "I'm ready to go," and she said: "Don't you worry about it, honey. You're on the list." Since I had been colorblind since birth, I was first turned down by the Air Force, then by the Navy and the Marines. Only the Army didn't care and put me into the infantry.

You came from a small town in Kansas. Where did you receive your Army training?

The Army sent me to North Camp Hood, Texas, for basic training for 13 weeks. We learned to shoot, obey orders and to march.

What did you think about the Germans at the time?

They were the enemy, evil incarnate, and we were the good guys coming to save the world. We were all for the war. We all wanted to be in it. That doesn't mean we enjoyed being in it, though.

But it took years for British Prime Minister Winston Churchill to convince U.S. President Franklin D. Roosevelt of the necessity of entering into the war.

I think Roosevelt played it pretty smooth preparing people for the war. America at the time was isolationist, to a large extent. The majority were of the opinion that they should let Europe fight its own war. We were safe over here behind our ocean.

And you? Did you support America entering the war?

From the time I was in about the 7th grade, I knew there was going to be a war. There were these threatening headlines in the newspapers and more and more extra editions were coming out. Actually, in high school I never really worried much about going to college because I grew up expecting I would be in the Army and fight in a war.

What were your first experiences at the front?

At first there was no front. Because there were no facilities for our ship, we couldn't anchor in the harbor. Le Havre had been summarily bombed. They finally took us off in the middle of the night on landing barges. It was bitter cold and snowing. There was about 3 or 4 inches of water sloshing around in the bottom. So we landed at Le Havre in bitter cold with wet feet. Soon afterwards we had a large number of people who suffered from frostbite. The camp doctors were forced to amputate fingers, toes, and feet and send these soldiers back to the United States. For them the war was over.

Which route did you take to Buchenwald?

We marched through half of Europe, but I never really knew where I was. In combat we low-ranking people in the Army were not allowed to have maps, guide books, cameras or anything that, if captured, would provide any information to the enemy. So I never had a map when I was in Europe, and I never knew where I was. It was painful in some ways. I hated that because I like being oriented.

What was your job?

Did you encounter any Germans during this long march?

When we went into a German town or village, there were never any people. We'd be there sometimes for hours and never see a soul, and I always felt like they were watching us. It was pretty spooky.

There were mainly sniper attacks. I do remember somewhere, we got out in some town and maybe off a truck or Jeep, and we were just standing there smoking, everybody lighting up their cigarette like always, and this one guy I knew took his helmet off and was immediately shot through the head and fell.

When did you hear the term "concentration camp" for the first time?

You know, I don't remember that I had heard about or knew about concentration camps where people were systematically killed off or starved. That is one of the horrors I remember, when people had been systematically starved and were nothing but skin sunk in over bones. There was no underlying flesh at all. It was pretty horrid.

Do you remember the day when you discovered the Ohrdruf camp?

Ohrdruf was in that string of towns going across, south of Gotha and Erfurt. Our division was the first one in there. When we arrived there were no German soldiers anywhere around that I knew about. There was no fighting with the Germans, no camp guards. The whole area was overrun by people from the camp dressed in the most pitiful rags, and most of them were in a bad state of starvation. The first thing I saw was a dead body lying square in the middle of the front gate.

It turns out that it was a Polish or Russian camp inmate, who had gone over and become a guard for the Nazis. So he was guarding and helping starve the other people. Then when the Americans came, he tried to blend in with the regular inmates. But they recognized him and beat his head in with a tire iron.

What else did you see?

Inside the gate was an area where a bunch of the camp inmates had been machine gunned and were all lying on the ground. Each one had their tin cup in their hand or lying next to them.

What were your thoughts when you were confronted with these images?

You know, I am unable to tell you what I was thinking then. That was a long time ago, and as I told you, until Barack misspoke, I hadn't thought about any of this for a very, very long time. In fact, I guess I prefer not to think about it. I can assure you I was horrified by the lengths to which men will go to mistreat other men. This was, to me, almost unbelievable. There was more: There were sheds full of dead bodies that had been stripped and thrown in and then stacked up on top of each other. I don't know how many, but many high and the whole length of the room. They sprinkled lime to keep the smell down. That's about the extent that I remember actually seeing.

What do you think about the Germans today?

I am puzzled by intelligent people who stand by and allow their country to be taken over and run by extreme radical types. I'm still somewhat puzzled by that. And I am fully aware that it could happen and has almost happened in this country. You know, I lived through the McCarthy era in the 1950s, when it was getting dangerously close to that sort of thing.

I was a Democrat from way, way before Barack was born.

Are you proud of your great-nephew?

Yes, naturally. I was at the Democratic Convention in Denver, where I was introduced by Sen. John Kerry, and then also at his inauguration. He encompasses so much: self-assuredness, competency, leadership and the great good luck that he had. Finally he had the good luck, if you will, of the financial crisis that got him elected, but now he also has to deal with it.

How would you describe your relationship with Barack?

Our relationship is warm and friendly, but I'm not part of his inner circle. We always have an interesting chat when we get in the same room together. He doesn't call me up and ask what I have to say about world policy or anything. And I never offer my opinions on any of this.

And will you join your great-nephew on his trip now to Germany?

If he invites me on Air Force One, I'll be there.