Are six Catholics too many for the Supreme Court?

Not if one is a divorced Latina. Sotomayor would be a positive influence on the court's five male Catholics. 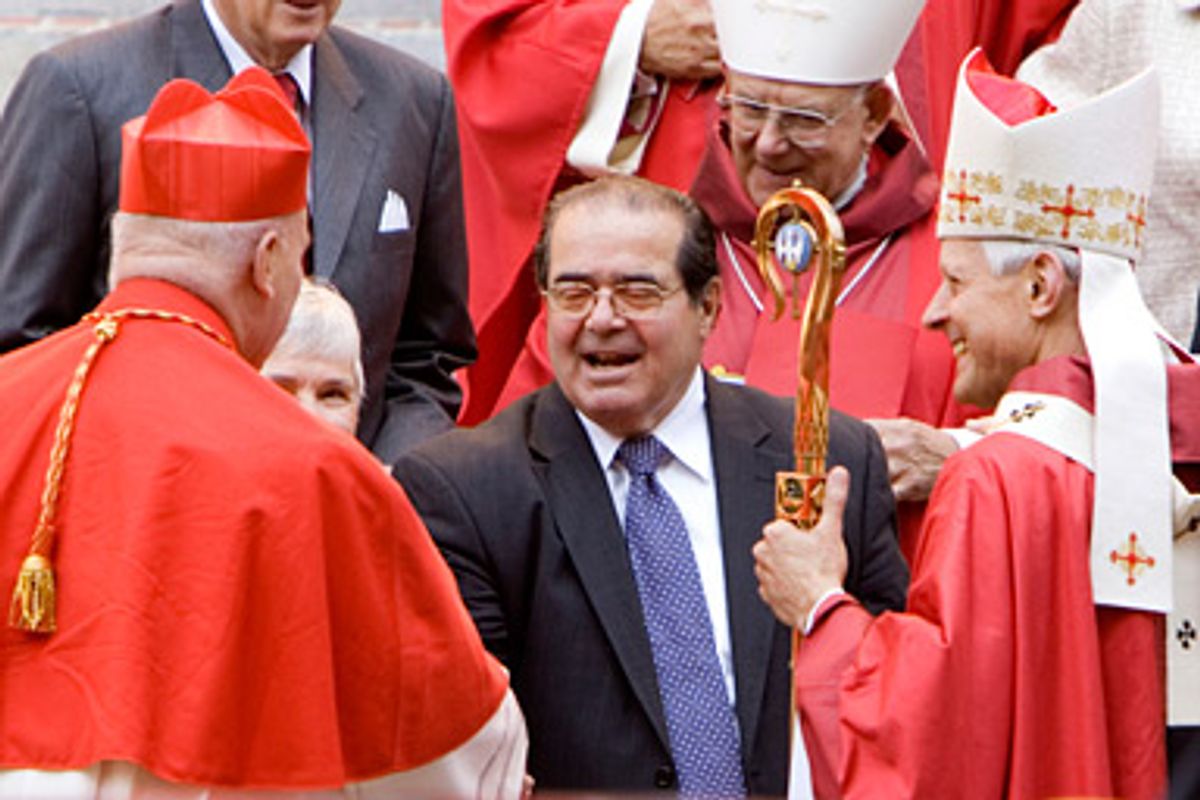 Archbishop of Washington Donald Wuerl greets Associate Supreme Court Justice Antonin Scalia after the celebration of the Red Mass at St. Matthews Cathedral in Washington, DC, October 5, 2008. The Red Mass is celebrated at the start of the Supreme Court term.
--

If Sonia Sotomayor is confirmed as an associate justice of the U.S. Supreme Court, six of the nine justices will be Roman Catholic. Two of the other three justices, Ruth Bader Ginsburg and Stephen Breyer, are Jewish. John Paul Stevens, at age 89 the oldest and longest-serving justice, would be the only Protestant left on the court. Should that worry us?

No. After all, for most of the court’s 220-year history, all the members were white Protestant males. Only 11 Catholics have served on the court, two African-Americans, two women, and seven Jews. Why not a non-Protestant majority for a while?

If anybody should be worrying about the sixth Catholic on the court, it's the five who are already there. The Catholic men on the court -- Samuel Alito, Anthony Kennedy, John Roberts, Antonin Scalia and Clarence Thomas -- all seem cut from the same traditional Catholic (and Federalist Society conservative) mold. In the Gonzales v. Carhart decision of 2006, the five men constituted the majority in the 5-4 vote to uphold the federal ban on partial-birth abortions. A year later, they again formed an all-male, all-Catholic majority in Ledbetter v. Goodyear Tire, ruling that women can be screwed out of equal pay for equal work if they don't demand equal pay soon enough. (President Barack Obama and the Democratic Congress nullified that decision nine days into the Obama administration with the Lily Ledbetter Fair Pay Act.)

It might be really instructive for these five guys to be forced to hang out with a divorced Latina with no kids -- a woman who, as the White House delicately put it, “was raised Catholic and attends church for family celebrations and special events.” Especially because the experience is likely to change Sotomayor as well — and make her an even more formidable counterweight to the male Catholic bloc.

There is nothing more likely to radicalize a “moderate” Catholic woman of even marginal religiosity than daily exposure to Catholic men who think women need to be protected from making money or from making bad and sad abortion choices. Sotomayor, the valedictorian of Cardinal Spellman High School in the Bronx, may feel she's been transported back in time. She will quickly get her fill of rigid , non-empathic, just-don’t-get-it, one-step-removed-from-Catholic-school, hold-out-your-hands-for-a-few-whacks-of-the-ruler decisions.

Perhaps, over time, Sotomayor can even convince the boys that who they are influences what they decide. It is nearly incomprehensible that deeply religious people can insist that their beliefs are not an integral part of the way they think, feel and act -- especially since religious faiths are full of explicit guidance on how to think, feel and act. Yet that's what they claim.

One of the leaders of the gang, Antonin Scalia, is especially deep in denial. In an address at Villanova Law School in October 2007, he informed us that he thinks identity is irrelevant. “There is no such thing as a ‘Catholic judge,’" said the Catholic judge. "The bottom line is that the Catholic faith seems to me to have little effect on my work as a judge … Just as there is no Catholic way to cook a hamburger, I am hard-pressed to tell you of a single opinion of mine that would have come out differently if I weren’t a Catholic.”

When questioned during the confirmation process, all of these Catholics, one after the other, insisted religion had nothing to do with how they did law. In September 2005, Roberts told the Senate Judiciary Committee, “My faith and religious beliefs do not play a role in judging. When it comes to judging, I look to the law books and always have. I don’t look to the Bible or any other religious source.”

“My obligation as a judge," Alito reassured the same committee not long thereafter, "is to interpret and apply the Constitution and the laws of the United States and not my personal religious beliefs.”

Roberts and Alito were not simply asked idle philosophical questions about the relationship of their religious beliefs and obligations and their oath of office. Their confirmation hearings were being conducted at a time when Catholic policymakers had been told by church authorities that they had no right as Catholics to make judgments about abortion, stem cell research, gay marriage and euthanasia that varied from church positions. In this context, it would be irresponsible for the senators not to ask Catholics if they believed they needed to comply with those directives. And we all have a right under those circumstances to decide that we don’t want to risk supporting justices or senators or presidents who operate under such religious discipline.

There would be nothing wrong with asking Sonia Sotomayor the same kinds of questions. We already know she's been willing, in the past, to admit the obvious, that identity informs lawmaking. There's no doubt that Republican senators will be asking her -- quite eagerly -- how her background shapes her thinking. Let's see if she's more forthcoming than the boys.

Enough, however, is enough. If we believe that diversity is a value on the court, then there can be no more Catholics -- male or female, any ethnicity, I don’t care. Six is enough. No more Catholics till somebody else gets a turn. Maybe even a white Protestant male.