On Tiller, O'Reilly regrets nothing 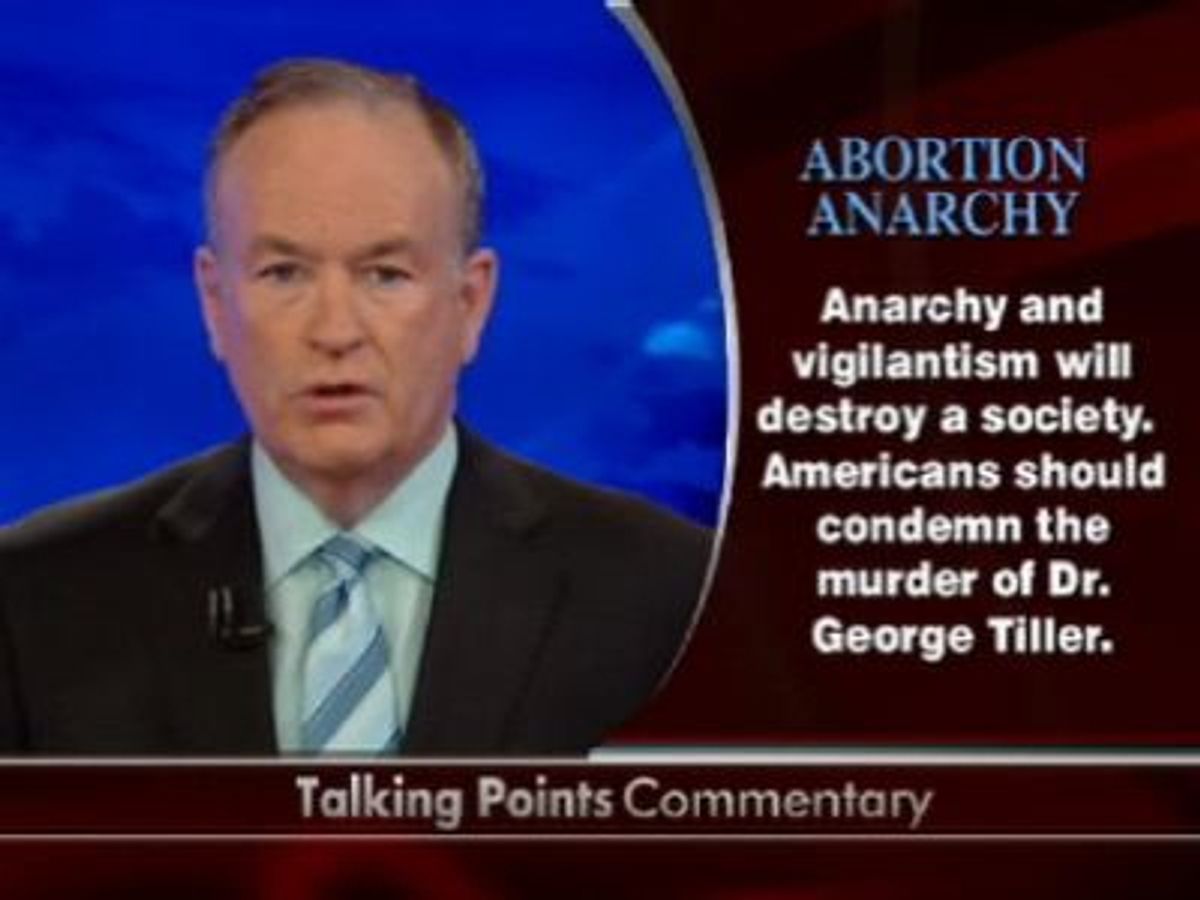 Bill O'Reilly is nothing if not predictable. Faced with an onslaught of criticism after a frequent target of his, abortion provider George Tiller, was slain Sunday, the Fox News host took to the air to address the incident. He stayed, as ever, true to form, not examining himself or his actions but going hard after his opponents: "pro-abortion zealots," "Fox News haters," "the far left."

O'Reilly did begin his show with a condemnation, of sorts, of Tiller's murder. It was perfunctory, and before long it had become a condemnation of Tiller himself. "Anarchy and vigilantism will assure the collapse of any society. Once the rule of law breaks down, a country is finished," O'Reilly said, continuing:

Thus, clear-thinking Americans should condemn the murder of late-term abortionist Tiller. Even though the man terminated thousands of pregnancies, what he did is within Kansas law.

The 67-year-old Tiller had performed abortions for more than 35 years. The Washington Times estimates that he destroyed about 60,000 fetuses. 60,000. According to the AP, Tiller performed more than 250 late-term abortions in 2003 alone

None of that seemed to matter to Tiller. Nicknamed 'the Baby Killer' by pro-life groups, he stated he was helping women. Tiller stated that.

O'Reilly then went on to discuss his feelings upon hearing of the doctor's killing -- naturally, he thought not of Tiller or his family, but of Bill O'Reilly and his enemies. "Now, when I heard about Tiller's murder, I knew pro-abortion zealots and Fox News haters would attempt to blame us for the crime," the host said.

But O'Reilly promised "no backpedaling" away from his foes. Going after former CBS producer Mary Mapes, who was involved in the "Rathergate" scandal and who'd criticized him over his coverage of Tiller, he said, "Unlike you, I report honestly, Every single thing we said about Tiller was true, and my analysis was based on those facts."

The real issue, the real reason O'Reilly was coming in for criticism?

"It is clear that the far-left is exploiting, exploiting, the death of the doctor. Those individuals want to stifle any criticism of Tiller. That and hating Fox News is the real agenda here... If these people were soooooo compassionate, so very compassionate, so concerned for the rights and welfare of others, maybe they might have written something, one thing, about the 60,000 fetuses who will never become American citizens. Or am I wrong?"

And from there, it was more of the same, the usual panels stacked in O'Reilly's favor, primed to agree with him that he has never said anything objectionable and that far-left zealots just want to shut him down. Juan Williams, for example, said -- and he phrased this as a sort of question, as if he hadn't prepared beforehand, though he'd been around for shows in which O'Reilly discussed the man he referred to as "Tiller the Baby Killer -- "I know you, O'Reilly, what you did was you said it bothered you personally." Given the affirmation he sought, Williams continued, "I've never heard you say block a clinic, I've never heard you say create violence... I've never heard you say go after the doctors... Never! Never! Not true."

That's true, technically. But it stripped O'Reilly's attacks of all their bite, ignored his having referred to Tiller's practice as "Nazi stuff," compared what he did to al-Qaida and to Soviet Russia, having said the doctor had "blood on his hands."

Now, none of that may have inspired the murder, especially considering that the suspect, Scott Roeder, has a long history of extremism completely unconnected to O'Reilly. But it would have been nice if, for once, O'Reilly could have had a guest who forced him to really reckon with the impact of his words. That didn't happen Monday night.