Prius vs. Hummer: No contest 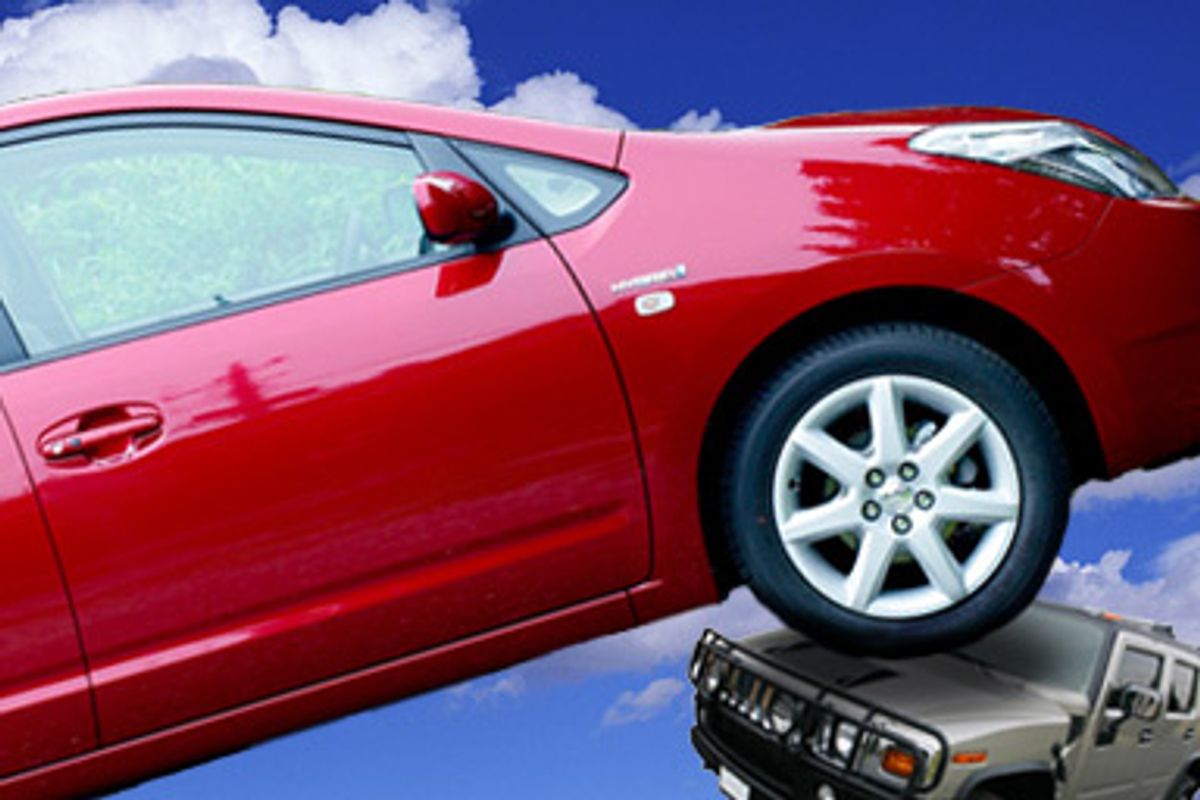 The third-generation Prius went on sale in Japan two weeks ago, reports the Associated Press, and sales orders have already topped 110,000.

To put that in perspective, in all of May, General Motors sold only 80,000 cars and light trucks in the entire United States.

Toyota has set its monthly sales target for Japan at 10,000 new Prius cars -- a figure that should make it the top-selling car in the country.

As the orders stack up, the company looks on track to meet or even surpass its goal and take that crown -- an astonishing accomplishment for a hybrid, although the Prius is fighting competition from another new hybrid, Honda Motor Co.'s Insight.

Contrast that news to today's reports on the state of the United States car market. Ford's sales in May fell 24 percent compared to last year, and that was considered an encouraging result. (Ford's April sales were down 31.3 percent; March, 40.9 percent; February, 46.3 percent.) Meanwhile, General Motor's sales numbers were down a miserable 37.5 percent.

(UPDATE:  The GM 37.5 figure is just for cars. When light trucks are included GM's sales only fell 29 percent. All things considered, May was the best month so far this year for domestic automakers.)

And in the ultimate dose of humiliation for the bankrupt automaker, news reports are indicating that GM has a "tentative" deal to sell its Hummer brand to the Sichuan Tengzhong Heavy Industrial Machinery Company Ltd, a western Chinese firm "with ambitions to become a car manufacturer."

As if what the world really needed right now is for China to start pumping out lots of Hummers. Can you hear the planet screaming?

Let's review. The new Prius, which is reported to get upward of 50 miles per gallon and possibly much more under the right conditions, is selling like premium grade ahi tuna in Japan, positioning its manufacturer, Toyota, at the leading edge of tomorrow's automotive market. Meanwhile General Motors, desperate to raise cash, has found a sucker in western China to take an albatross off its neck that symbolizes everything American car companies have been doing wrong for the last several decades.

But that was the old GM. The new GM is already out with a slick 60-second advertisement touting its glorious new post-Chapter 11-bankruptcy-and-$50 billion-bailout future. Because at General Motors, "The only chapter we're focused on, is Chapter 1."

China How The World Works Toyota