Don't take me out to the broad game

The Dodgers are trying to lure women with radio broadcasts and celebrities. As a sports fan, I'm trying not to gag. 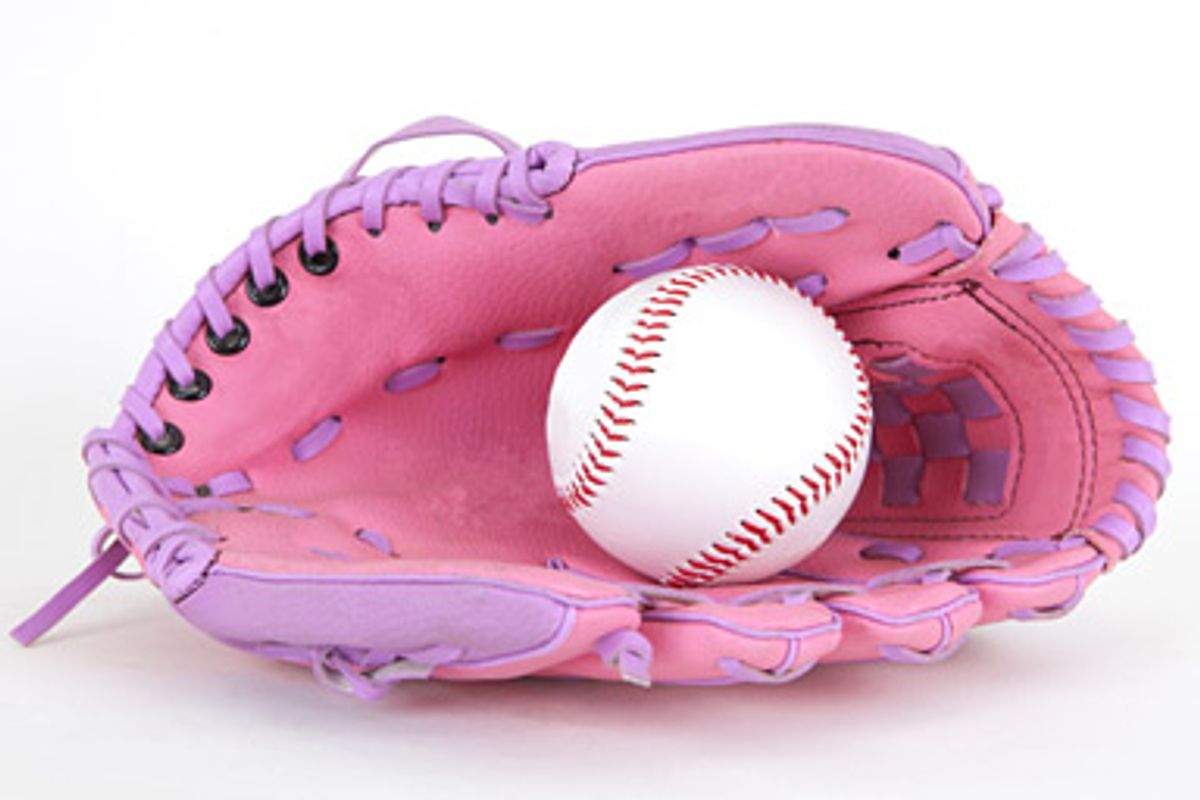 It wasn’t long after the Los Angeles Dodgers announced their new radio broadcasts for women that the Internet erupted in jeers: "We're really glad the Dodgers understand that, as women, we feel uncomfortable learning anything that's not coming from a Mom's perspective," wrote Sadie Stein at Jezebel, while Deadspin positioned the broadcast as, “Some Chick To Teach Other Broads About Man Things.”

When I heard about the broadcasts, my leg practically broke from the knee-jerk. As a woman who has played sports, followed sports, and written about sports, the idea of being pulled aside and having the game “explained” to me and everyone else who doesn't have a Y chromosome isn’t just insulting -- it makes me wonder if the Dodgers’ front office is legally blind. Did they somehow miss the fact that more than 40 percent of the MLB fan base is female? It sounded like another boneheaded attempt at target marketing. You know, if you build it -- and paint it pink -- they will come.

For female fans, there are few things more painful than watching marketing pros smother sports with pastel. It’s bad enough that women running, say, a marathon have to wade through racks of pink tops and cringe-inducing jogging “skirts.” When we want to buy our favorite team’s jersey, we’re forced to weed through the same cotton candy jungle. Pretty soon, they’ll be selling us Dodger blue tampons with glitter wrappers.

But before you completely upchuck in your Cracker Jacks, it is worth considering this: Attendance to major league games is down as much as 4.5 percent from this time last year, thanks primarily to the recession. The Dodgers alone are already averaging almost 2,000 fewer attendees per game than last season, and while MLB teams haven’t been hit as hard as feared, they’re not exactly unbruised.

Under such circumstances, why not market to women? For one, women are more likely to purchase team apparel, and are increasingly identifying themselves as fans. The Boston Globe reported that the percentage of women who call themselves Red Sox fans rose from 45 percent in 2001 to 77 percent in 2006. Sure, a World Series victory jump-started the ride, but when that bandwagon rolled into town, women quickly jumped on board -- and spent. The Cleveland Indians have an entirely separate store for “female” merchandise and apparel at Progressive Field (talk about irony) called “Tribe Pride for Her.” Not only do they sell the regular cap and T-shirt swag, but also $325 pocketbooks.

“Our CEO has a saying that behind every great man is a great woman, and behind every great woman is a checkbook,” jokes Dr. Charles Steinberg, the club’s executive VP of marketing and public relations -- although I’m not sure if he’s laughing with me or at me. His reasoning, however, is not invalid. Marketing research from the Dodgers’ camp and beyond shows that women more often control household finances than men.

Enter the Dodgers’ Women’s Initiative Network (WIN). Under the direction of CEO Jamie McCourt, who to her credit is the highest-ranking woman in baseball, the club launched its inaugural WIN radio broadcast on May 20 to an audience of about 400 (450 people later listened to the archived broadcast on the Web). Jeanne Zelasko, a former studio host of FOX’s national baseball coverage, gave the play-by-play, while ex-Dodger Mark Sweeney handled analysis. The next broadcast is tonight, June 3, when the Dodgers face the Arizona Diamondbacks.

I tuned in to listen to the debut, and I have to say, the broadcast wasn’t terrible. Zelasko delivered with relative ease, and Sweeney managed to stay away from “Hush, honey,” territory. For most of the game, I sat with my ears perked, waiting for the condescending explanation of the infield fly rule or a double switch -- but to no avail. It was, if a bit unremarkable, at least competent.

On the other hand, Zelasko offered few feminist perspectives -- which seemed to be the whole point in the first place. One of the only moments that jumped out was when she mentioned it was Casey Blake bobblehead day at the park and said, “You know how if you’re a parent and you have more than one kid, you have to bring something home for everybody?” But that statement was more of a throwaway than anything else, and didn’t change the experience of the game for me as much as it interrupted it.

The rest of the broadcast consisted of Zelasko simply talking about what was happening on the field, promoting WIN and asking Sweeney about his days in the dugout -- the latter of which could be effective in gaining women's attention, according to Marti Barletta, president and CEO of Trendsight and Marketing to Women. While men tend to be more stats-driven, women relate more to players’ back stories. In this capacity, Zelasko could serve as a connection for women lost in other broadcasts’ analytics. But most women, especially the Dodgers' faithful, who grew up listening to Vin Scully (who with 60 years experience, tells stories better than the Brothers Grimm), likely won’t be impressed.

“Even if there was no difference between Jeanne’s play-by-play and a man’s play-by-play, at least you’ve helped break the barriers,” says Steinberg, who, frankly, has a point. The vast majority of female broadcasters are quarantined to the sidelines, forced to ask sometimes silly questions of sweaty players that require relatively little knowledge of the actual game. But really breaking barriers would require letting Zelasko -- who reportedly wasn’t invited to audition for the more prominent TV play-by-play spot -- broadcast for an audience not ordained “female.” (The only comparable woman is the Yankees’ Suzyn Waldman, who unfortunately is best known for crying on air. Her role in broadcasts is color commentator.)

To be fair, the Dodgers are, far more than any other club, progressive not just in the hiring of women but the positions for which those women are hired. Besides McCourt, they also have assistant general manager Kim Ng, Major League Baseball’s highest ranking woman in baseball operations. And the initiatives aren’t exactly failing. The Dodgers expect Zelasko’s audience to grow with each broadcast (the debut wasn’t heavily promoted), and there have been lines outside the WIN tent since mid-May. I can burn my bras (or baseball caps) all I want, but the truth is: A lot of this stuff works.

“Every time you see a women’s marketing program that has fashion or spas in it, it’s very tempting to say, ‘Women are about a lot more than that,’” says Barletta. “But it’s true that a lot of women do like those things, and a lot more than men do.”

But what about the pink caps? The pricey pocketbooks? The bedazzled denim jackets sold at team shops?

“Things can be pink,” says Barletta. “But you also need to have red, and blue, and black and white options. If you just say, ‘Here’s a pink phone for women, or a pink shirt for women,’ women will shoot you in the face.”

While major league teams like the Phillies and Braves are targeting women with Baseball 101 programs designed to teach women basic instruction and provide them face time with players, the Dodgers, who also have a clinic at their spring training site, are taking a slightly different approach this season. For McCourt and company, they're luring in the women by lining up celebrities. This is L.A., after all.

On June 1, fans gathered outside the WIN tent before the game to meet not Matt Kemp or Orlando Hudson, but the cast of "The Young and the Restless." Don't worry if you missed it: The cast of "Days of our Lives" will be on hand for autograph signings before the game on June 6.

The stunt is enough to make many a female fan throw her foam finger in the air -- but clearly not everyone is peeved. “The events started with just 1,500 or so people signing up, and instantly tripled to 4,500 in just the first five days we had the Dodgers WIN tent,” says Steinberg.

“Whether or not women appreciate being targeted depends on how it’s done,” says Barletta. “I don’t think [WIN] is sexist, but I think it’s poorly executed.”

So what can you do? As someone who finds nothing more thrilling than watching a runner slide into home or a ball soaring over the outfield, it breaks my heart to think of women flocking to the fields, Sharpies in hand, to get headshots -- not baseballs -- signed. Trot in all the celebrities you want, but I will never waver in my belief that there are really only two things worth standing in line for at a game: a beer and a hot dog.

Caitlin Moscatello is a writer living in New York City. Her work as appeared in Sports Illustrated, TIME.com and MSN.