No shoes thrown at Obama

In Cairo, the president reaches out to the Muslim world with mild criticism and a gentle defense of the U.S. 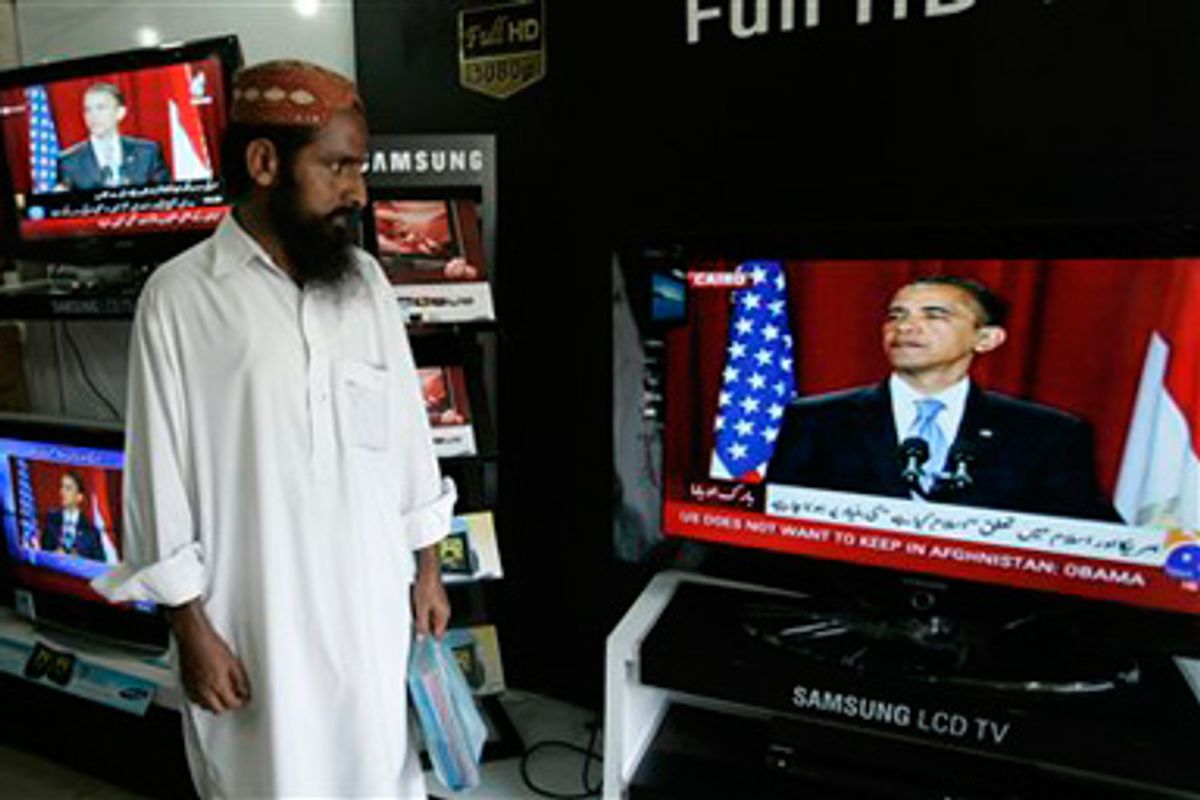 President Obama was more than halfway through his speech at Cairo University Thursday morning when, suddenly, he was interrupted by a shout from the audience. Security in the Egyptian capital was tight, and security around the hall where he spoke was even tighter, but it seemed -- for a moment -- like somehow something had gone wrong.

Until, that is, Obama acknowledged the interruption with a smile and a "thank you." What the person in the audience had yelled, it turned out, was a hearty, "Barack Obama, we love you!" -- in English. The adoration, the campus setting: it was like Obama was back on the campaign trail before an adoring college crowd in Iowa or New Hampshire, circa October 2007. The difference between this president's welcome from the Muslim world and the last president's farewell to it  couldn't have played out much more to the White House's liking if aides had planned it.

That brief interruption was about the only thing about the speech that advisors didn't script carefully ahead of time. The administration encouraged people around the world to sign up for text messages of the address, available in English, Arabic, Urdu or Persian. U.S. cellphones couldn't subscribe, due to a legal prohibition against spending State Department public diplomacy funds on projects that reach a domestic audience, but the White House sent English tidbits out on Twitter and Facebook (where more than 2,000 people gave a virtual thumbs-up to the speech's closing lines), and posted a slick video on its official Web site about American Muslims serving in government.

The speech didn't break any new policy ground, and anyone looking for signals that the U.S. was making major shifts would have been disappointed. But its thoughtful tone, and its careful signals of respect for Islam, clearly strove to turn the page from the last eight years.

"I've come here to Cairo to seek a new beginning between the United States and Muslims around the world, one based on mutual interest and mutual respect, and one based upon the truth that America and Islam are not exclusive and need not be in competition," Obama said. "Instead, they overlap, and share common principles -- principles of justice and progress; tolerance and the dignity of all human beings."

Even the timing of the speech belied a greater concern for how it was received abroad than how it went over at home. Obama spoke at 1:10 p.m. in Cairo -- which was 6:10 a.m. back in Washington, and the middle of the night for the West Coast. After he finished, he met with Arab journalists, then flew by helicopter to Giza to tour Egypt's ancient pyramids; there was time to have given the speech a little later and still get to Germany, the next stop on his whirlwind world tour this week. U.S. cable networks carried the nearly hour-long address live, but it wasn't primarily aimed at voters here.

In true Obama form, he balanced criticism of the Muslim world with a recognition that Western powers hadn't always acted blamelessly toward it, and set off each recognition of the nuances of life in the Middle East with a defense of his own country. His challenges to Muslims were softly couched, without any of the talk of "radical Islamic jihadists" that Bush administration officials liked to sprinkle liberally in their discussions of the region. "I consider it part of my responsibility as president of the United States to fight against negative stereotypes of Islam wherever they appear," he said. " But that same principle must apply to Muslim perceptions of America. Just as Muslims do not fit a crude stereotype, America is not the crude stereotype of a self-interested empire."

The White House had consulted with Muslim advisors for weeks while drafting the address, and Obama and his speechwriters tailored its form to fit the setting. Founded in 975, Al-Azhar University, which co-hosted the speech with Cairo University, is considered the world center of Sunni scholarship. So Obama organized his remarks like a thesis, with a scholarly tone. He ran through six main themes: "violent extremism," where he also folded in a brief discussion of the wars in Afghanistan and Iraq; the Israeli-Palestinian conflict, which Obama broadened to include a mention of the responsibility of other Arab states to help solve; nuclear weapons, where he addressed Iran; democracy, of keen interest especially among Egyptian intellectuals, given the country's authoritarian government; religious freedom, which he said included freedom for Shi'a and Sunni Islam but also Christians, Jews and others; and women's rights, which Obama said should include the choice both to wear a hijab or not and the choice to get an education.

The speech had more Drudge-bait in it, just a day after Obama shocked conservative bloggers by thanking Saudi King Abdullah in Arabic during a brief appearance in Riyadh. He got his first ovation by greeting the audience in Arabic with, "Assalaamu alaykum," or "peace be unto you." He quoted the Koran, drawing more applause, recalled hearing the azaan, or call to prayer, as a child in Indonesia and noted that his Kenyan father came from "generations of Muslims." (Obama did, however, pointedly say, "I am a Christian," in the same section.) But most of the speech would have seemed familiar to anyone who's paid attention to the president's rhetorical themes -- the underlying message throughout was, we're all in this together.

"We have a responsibility to join together on behalf of the world that we seek," Obama said. "A world where extremists no longer threaten our people, and American troops have come home; a world where Israelis and Palestinians are each secure in a state of their own, and nuclear energy is used for peaceful purposes; a world where governments serve their citizens, and the rights of all God's children are respected. Those are mutual interests. That is the world we seek. But we can only achieve it together."

Reaction back home was a little slow to develop; maybe political operatives had all slept through it. Republicans seemed eager to ignore the speech, at least publicly, with the exception of the rapidly shrinking Republican Jewish Coalition, which said the speech's problem was its balanced tone on the Israeli-Palestinian conflict. A morning e-mail blast to reporters from the Republican National Committee didn't mention it at all, and the first press release of the day from GOP Senate boss Mitch McConnell was entitled, "All of us want health care reform." In private, GOP strategists gave Obama credit for making the speech, but weren't exactly effusive in praising it. "He walked the tightrope, huh?" one said, noting the careful balance in the text. Democrats weren't much quicker to call attention to it, other than a brief, boilerplate release from John Kerry, who heads the Senate Foreign Relations Committee.

Right-wing bloggers, predictably enough, hated it. "Barack Obama's ivory tower naiveté will get us all killed," wrote Erick Erickson, the editor of RedState.com. The National Review's Jonah Goldberg dismissed the speech with a Burt Bacharach quote and a link to a bunch of canned meats. Just as predictably, Osama bin Laden didn't seem to like it much; he released a new audiotape overnight, as Obama landed in Cairo, just a day after his Egyptian deputy, Ayman al-Zawahiri, issued a video warning to the U.S.

Obama and his speechwriters, though, had scoured holy texts of the three religions that were founded in the Middle East. And he seemed content to let his closing words answer his most aggressive critics. Quoting from the Koran, the Talmud and the Bible, he called for peace. "The people of the world can live together in peace," he said. "We know that is God's vision. Now that must be our work here on Earth. Thank you. And may God's peace be upon you."